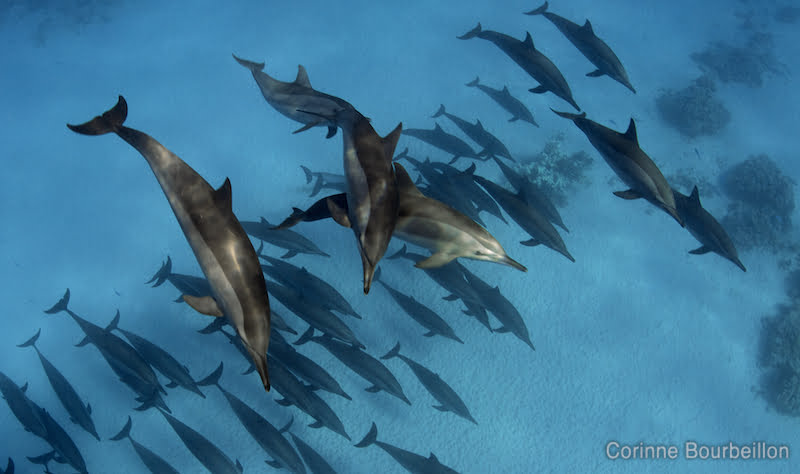 Prepare your snorkel, but forget The big Blue and Flipper the dolphin...It gets better !!!! I take you to admire Egyptian dolphins, in 1 minute 30 of video.

Video: the dolphins of Sataya

→ Direct link to the video: The dolphins of Sataya

The site where I filmed this little video in November 2011 is called Sataya. It's in the Red Sea, in Egyptian waters. You can even see the reef on satellite images of Google Maps (see below).

There, live permanently long-beaked dolphins, which can be observed under water in palms-mask-tuba (PMT) or snorkeling in English. Scuba diving is not allowed near the reef to avoid disturbing them. The reef is supposed to be a place of rest for them.

On our little trip there, we were lucky. Two impressive schools of dolphins were there. We only had the right to go in the water for a short session of about twenty minutes. During this brief interval, the dolphins seemed to us players, jokers, not hesitating to come and brush against the swimmers, not at all scared.

Swimming with the dolphins was a new experience for me. In Bali, I had given up seeing the dolphins of Lovina, not wishing to contribute to the tourist business organized on the spot which seemed to me not very respectful of the animal.

Disclaimer: this stay in the Red Sea dates from November 2011. Since then, the number of boats and tourists arriving daily in the bay of Sataya has increased a lot, which is obviously not a good thing for the tranquility of resident dolphin beds ... All operators and visitors do not not respectfully, not hesitating to cut off the road, not reducing the engines, etc. I went back in 2017 and what I saw did not really like me (so at the time, I preferred not to post anything on the subject): boats everywhere and dolphins fleeing from humans paddling, instead of coming to meet them to play and swim as I had seen in 2011 ... Without being a specialist in marine mammals or the site, I realize that the pressure has become too strong and that it is probably preferable, now, to give up going to see the dolphins of Sataya. They will be happier without us!

Sataya could become a protected area in 2019. To promote good practices on the site and prevent the area from turning into a vulgar "tourist park", a petition, launched by Frédéric Chotard Sea Dolfin, specialist in the observation and approach of these marine mammals in apnea, is in progress. He hoped that the Egyptian authorities would take his recommendations into account. Contact him for the details of his project, which seems to me really well thought out. The petition is here → Help us protect Sataya's lagoon

Ethical approach to whales and dolphins. To learn more about the behaviour of these marine mammals and the possible interactions with them, in respectful conditions and for scientific purposes, I refer you to the sites of Éric Demay, a great specialist in these cetaceans: BaleinesetDauphins.com and Tursiops Group.

At the moment, I did not feel that the few small groups of snorkelers present disturbed many dolphins. No need to palm to approach them. They are the ones who come to see you, or not ...

We only stayed a few minutes swimming with them. Fantastic minutes! 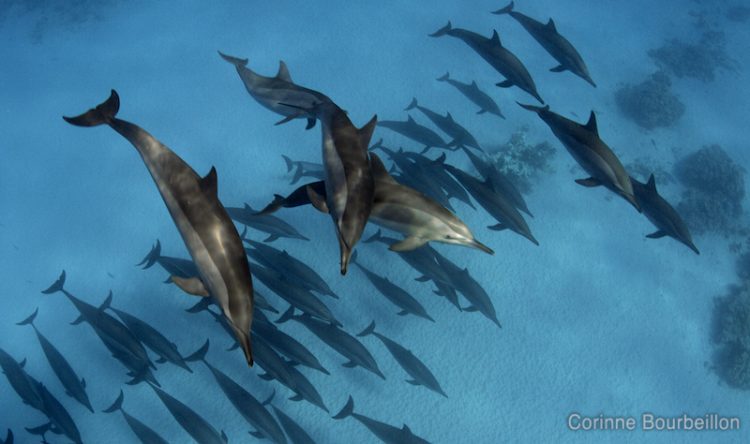 I'm not really a customer of the pseudo-green mythology, a little new-age and often foolish around the dolphins. However. To see them evolve freely under water, very close to me, impressed me much more than I would have thought. It's really an extraordinary meeting.

However, I had already seen dolphins, but always from a boat. It is not uncommon when you sail in Indonesia, Malaysia, or Thailand, to meet dolphins that come to play for several minutes in front of the bow.

But there, under water, it was something else. I was so fascinated that for once I neglected the videos and the photos, to better contemplate them ... 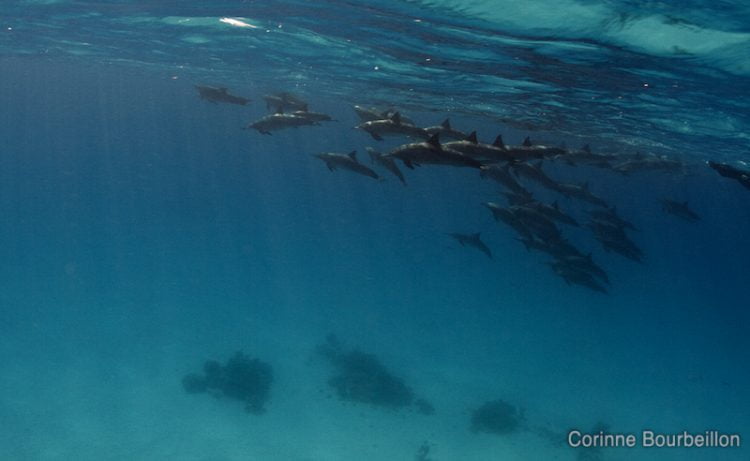 Their incessant twirls seemed like a dance. And then there were these little facetious whistles, almost mocking, when they came almost in contact to immediately go to the bottom. Impossible not to be touched, stirred.

I swear, it's something, to swim near the dolphins ... It was both beautiful and moving. An aesthetic emotion, almost.