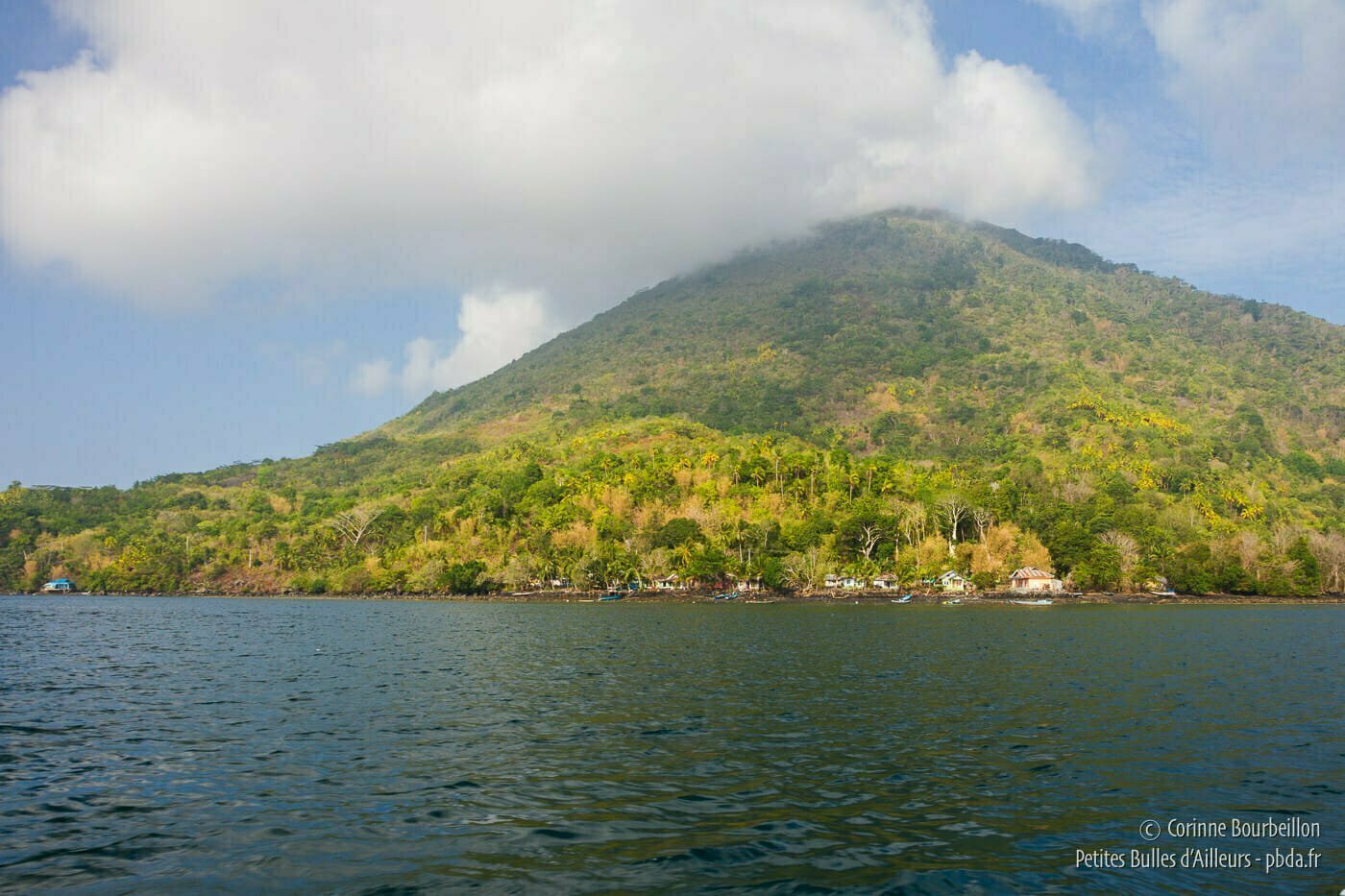 Banda Api, the island-volcano of the archipelago. Maluku, Indonesia, October 2015.

Waking up at the foot of a volcano and living Magellan's dream... what could be more exhilarating? Welcome to the Banda archipelago, the mythical spice islands in Indonesia.

End of October 2015. I am on board of Waow. First step of this fabulous diving cruise : the archipelago of BandaA handful of volcanic islands in the Moluccas, Indonesia, southeast of Ambon. This is it:

They are islands far from everything, nowadays little known by tourists coming to discover Indonesia... Yet, it is for them that Magellan has embarked on the first circumnavigation of the world by boat in history! I'm madly enthusiastic about the idea of discovering this archipelago at the end of the world.

Between two dives full of hammerhead sharks in the Banda Sea, I'm just waiting for one thing: to set foot on these mythical islands, the famous Spice Islands, so coveted in the 16th century.e and XVIIe centuries! Magellan wasn't so lucky. He was killed (April 27, 1521) in the Philippines, when he was almost at the end of his career...

My fellow divers and I finally disembark on October 30, 2015 in Banda Neira, for a sightseeing excursion. On the program: visit of the small museum, nutmeg plantations and the Belgica fort ...

Banda Neira is at the same time the name of the island, the port and the administrative capital of the archipelago which has ten islands in all (only six-seven are inhabited). This is where almost half of the 14,000 inhabitants of the Banda archipelago live. It is here that we discover the bloody colonial history of the spice islands (clove, cinnamon, nutmeg), which were fought over by the Spanish, Portuguese, English and Dutch in the 16th century.e and XVIIe centuries. At that time, the Moluccan archipelago was the only place where the precious nutmeg grew. So precious, it was worth its weight in gold...

Banda Neira is today a large and peaceful town, where you can still see old Dutch colonial buildings, erected at the time of the almighty power of the Netherlands. la VOC, the Dutch East India Company.

There are several schools, administrative buildings, a mosque, small shops, a diving centre, a tiny airport, a few guesthouses and hotels...

The fort and the volcano

Just in front of Fort Belgica, built in the 17th century.e century by the Dutch on the remains of a Portuguese fort, rises the volcanic cone of the island of Banda Api.

The most motivated of our small group climb to the top of the towers of the fort. Ladder scrap not reassuring and very narrow passage. But it's worth it. The view is spectacular. Steffan, the videographer of Waowtake advantage of the excursion to take out his drone !

For several days, during the navigation of the Waow, which takes us from one dive site to another around the archipelago, we could admire the volcano from different angles. called gunung api It is a mountain of fire in Indonesian, it culminates at about 640m, dominating the whole archipelago.

The last eruption of the Banda volcano goes back to 1988. The guide who makes us visit the tiny museum of Banda Neira, remembers it. "But everyone was evacuated before the main eruption, He explains. There have only been one or two deaths, elderly people who could not or would not leave their homes. »

The lava has since frozen. Two huge black flows scar the sides of the volcanic cone to the sea. The day we arrived in the archipelago, we dived on a site called... Lava Flow. At the foot of one of the lava flows!

All the children in Banda's schools know this story... The fate of New York is intimately linked to that of the tiny island of Run (pronounced "roune"), the westernmost island of the Indonesian Banda archipelago.

Colonized first by the Portuguese around 1512, Pulau Run (pulau means "island" in Indonesian) was taken by the English around 1605 with the neighbouring island of Ai. The latter covet the precious nutmeg I was telling you about above, for their British East India Company.

The Dutch, who at the time wanted to establish a monopoly in the Indian Ocean for their own company, the Dutch East India Company (VOC), on the lucrative trade in spices and nutmeg in particular.

It's a long and bloody story... I'll make it short: the Dutch, who succeeded in ousting the Portuguese from the Banda archipelago, imposed their domination there by massacring the islanders in 1621. But the English resist and still hold Run and Ai.

Finally, the English will retreat, but not without negotiation. The spell of Run is sealed by the Treaty of Bredasigned in 1667. Pulau Run is ceded to Holland, and in exchange England receives a remote island in the Americas, in what was then New Amsterdam: Manhattan!

Yes... It's hard to imagine, at the time, how Manhattan would develop over the following centuries to become the New York City we know today.

To learn more about the eventful history of the Banda Islands (ancient and recent), I refer you to this fascinating and very complete story, written for the site "Bali Autrement" by the anthropologist Franck Michel, a great specialist of Asia:
→ The Banda Islands, a coveted archipelago

When our small group is about to leave Banda Neira to return to the WaowWet in the bay, the rusty ship of the Pelni, the Indonesian ferry company, has just arrived. Suddenly, it is the crowd of great days in the village, still asleep and almost desert an hour earlier.

The street vendors have set up their stalls in the street leading to the pier - fish, spices, fruits and vegetables ... Quantity of goods are loaded and unloaded from the huge ferry, in a rush more organized than it is the air. It screams, it's jostling, there's a constant back and forth of carriers, motorcycles, people ...

As in all islands that are a little isolated, the arrival of the boat that provides regular connections with the rest of the world is an event. A real "lifeline" for the islanders. As our dinghy moves away, I contemplate, in a dream, all this agitation on the quay, thinking of Magellan, the great sailors of yesteryear and the countless Anglo-Dutch wars for the control of commercial shipping routes.

The spice route once made the Moluccas and Banda Islands famous. Westerners have forgotten them a little today. They attract only a few travelers, curious to get off the beaten track, and some privileged divers ...

I was the guest of Waow from 27 October to 8 November 2015, for this diving cruise called "Secrets of Seram". All the opinions expressed here remain 100% mine.