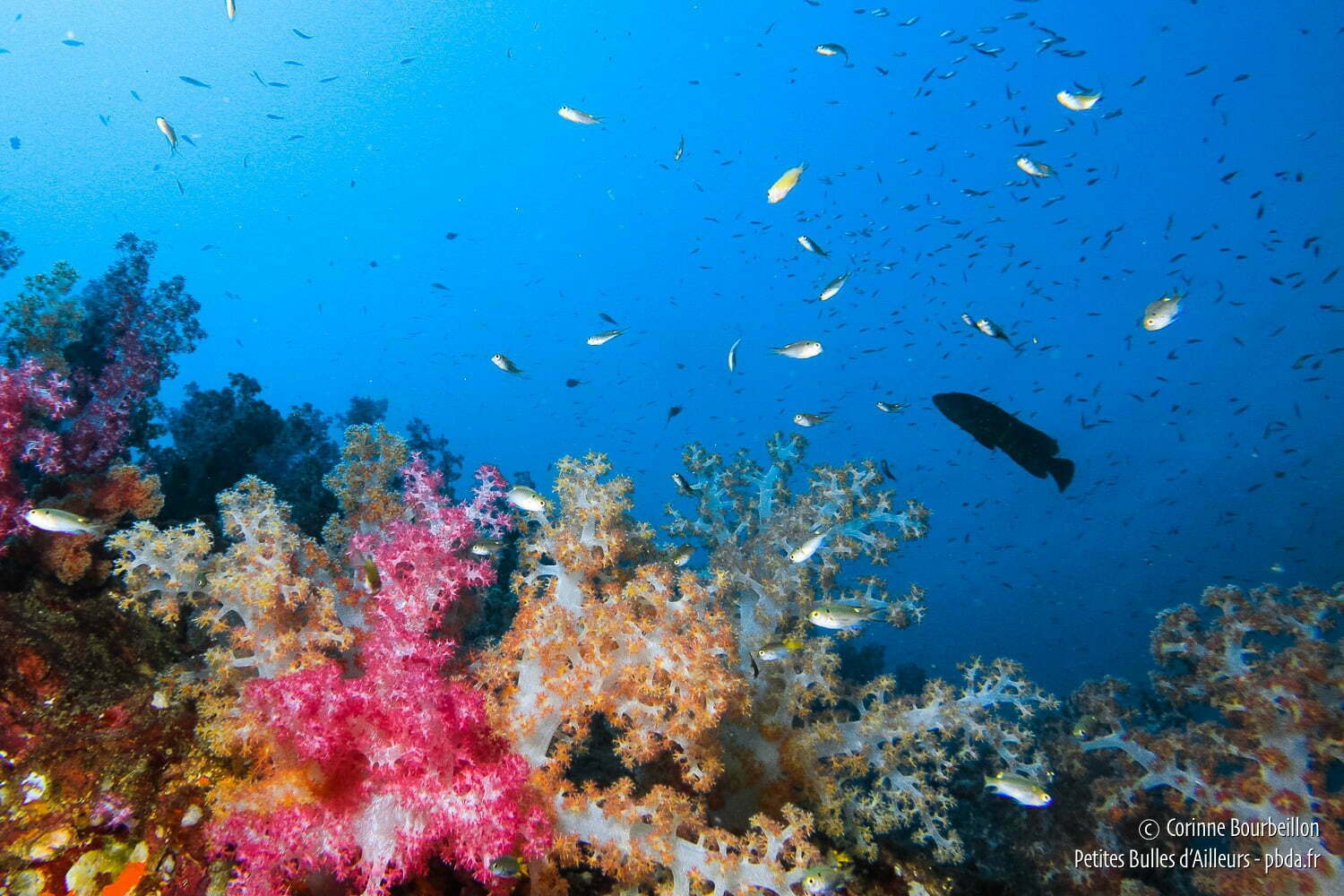 Hop! To the water! We're going back below the surface. On the program: a short cruise to the Similan Islands, with Richelieu Rock, Koh Bon and Koh Tachaï on the course. These are the most famous dive sites in Thailand...

When I embark, in February, on the Sea of Fantasy from Eden Divers, I know more or less what to expect: it's with this boat that I had already dived in 2009 (see → The cruise makes bubbles and other links at the end of this post).

In the crazy Thai armada that embarks daily divers on the Andaman Sea, this is one of the few boats to offer individual cabins, which suits me well (I do not like paying the exorbitant supplements singlenor sacrifice my sleep for snoring or snoring in a shared cabin).

Three years ago, I really enjoyed the comfort and the supervision, the Nitrox free, international atmosphere with divers of all ages and all walks of life ... so I decided to go back home.

Luckily, for this cruise, we are only 5 customers on the boat, made to accommodate 13 of them. Enough to spread out without rushing! I'm delighted.

The Thai crew is very caring, as always. Dinner is ready when you arrive, just step on the table.

My four diving companions are all German. Thirties, open and nice. We will have a good time during these three days. The staff who supervises this cruise is German too. Essen, Schlaffen, Tauchen

Good atmosphere, again, but... more Germanic than international this time! 😛

Bad luck: engine failure at the start. And since a spare diaphragm for the compressor is also missing... NitroxSo you'll have to dive "normally", in the air.

Good. All this is not too serious, it will not affect the cruise, fortunately. We will leave after all the other boats, much later, at night. Two Thai mechanics will spend long hours trimming and sweating, in the suffocating atmosphere of the hold, to repair the engine.

I wondered, before diving, what state would be the coral, which suffered the bleaching due to water heating. And now that I've seen for myself, it's hard for me to judge, actually.

It was my 3rd dive cruise at the Similan, but with three years between each. My memories are not so precise and I do not know the sites by heart.

I believe that it is near the surface, where there were real "coral gardens", that the damage is the greatest. But frankly, deeper, on all the sites where we dived, I enjoyed myself.

The highlight of the show being (as on previous occasions), in the Surin archipelago, the sumptuous Richelieu Rock, teeming with life, covered with a profusion of purplish soft corals, undulating under the current. Magnificent!

We often hear that it was Cousteau (him again!) who gave his name to Richelieu Rock, the color of the soft corals lining the reef having evoked the purple of Cardinal Richelieu's robe...

In fact, this version would be a beautiful legend (more). Charlie, from the diving center Seafarer Divers...in Phuket, explains to me that it's not possible:

That's wrong, Cousteau's "Calypso" was never at Richelieu Rock, because I was the dive guide for this expedition during the shooting of the film "The Convicts of the Sea".

In 1988, no dive center had dipped in Richelieu Rock and nobody in the area knew this superb site.

The English probably gave this name because Cardinal Richelieu had made them drool in the seventeenth century with his navy, and as this rock is treacherous to navigation, they could compare it ... the cardinal from Richelieu.

But in fact, the real explanation would be the following (thanks to Ludovic to put me on the track, via an article from Bangkok Post(see the blog of Wicked Diving): Richelieu Rock wouldn't take its name from any reference to the famous Cardinal Richelieu (1585-1642), but of a certain Andreas Plessis de Richelieu (1852-1932), which marked the history of Thailand.

This Dane, as his name does not indicate, was sent to Siam where he distinguished himself in several naval battles at the end of the nineteenth century. He was the first foreign commander to join the Siamese navy, which promoted him to the rank of vice-admiral in 1902.

Contrary to predictions of doomed birds, I managed not to drown my 7D ! 🙃

I know it makes many people shudder at the thought of taking a camera like this underwater... I'm not too worried about it myself. I always prepare my camera case very carefully, preferably the day before, with no rush. In any case, I can't imagine diving without my camera anymore!

But I still need several dives to get back on my feet and to be able to make the pictures I want. Small disappointment, during these three days of cruise: the weather was rather grey, which did not help me much for the underwater ambiance pictures...

And my main dilemma, from one dive site to another: the choice of the objective. Macro or wide angle? Small beasts or big beasts?

Where the hell are the mantas?

At Koh Bon, obviously, no dilemma for choosing the goal. Wide angle, necessarily. This is the site of the mantas rays.

Alas, we did not cross them. It's not for lack of insistence. We plunged and returned to Koh Bon, even attempting an incursion into the blue, away from the reef. In vain. However, they should not be far ... (But I'll have a little luck a few days later, after this cruise, returning diving to Koh Bon the day, from Khao Lak ...)

Finally, in the "big beast" category, we were also hoping to cross paths with a whale shark. No, we didn't. Not the tail of one. It just wasn't our day. Not that day or any other day.

I can see how lucky I was five years ago: several manta rays, and one whale shark for my very first Similan dive cruise!

All right, then. No mantas, no whale shark this time. But there was some "big" one, though. Lots of very impressive schools of jacks and similar fish. Our tour-leader, Karin, saw two swordfish, I saw an eagle ray, the Germans saw a blacktip shark.

Them, they're still here!

I put here links to posts and photos that I posted online, after my previous cruises-dives at Similan.

It was with the dive center Sea Dragonbased in Khao Lak, on the southwest coast of Thailand. I liked the atmosphere at the time, rather young and backpackers, very good option for small budgets. I hadn't launched this blog yet, but I had posted pictures on the very first sites I had created at the time, Carnets d'Asie du Sud-Est (South-East Asian Diaries) and Diving in South East Asia :

In 2009, I had discovered the Sea of Fantasy of Eden Divers (with whom I chose to leave for this Similan cruise in 2011). Good comfort, one of the few boats offering individual cabins, free nitrox and German-style square organization, but relaxed all the same...