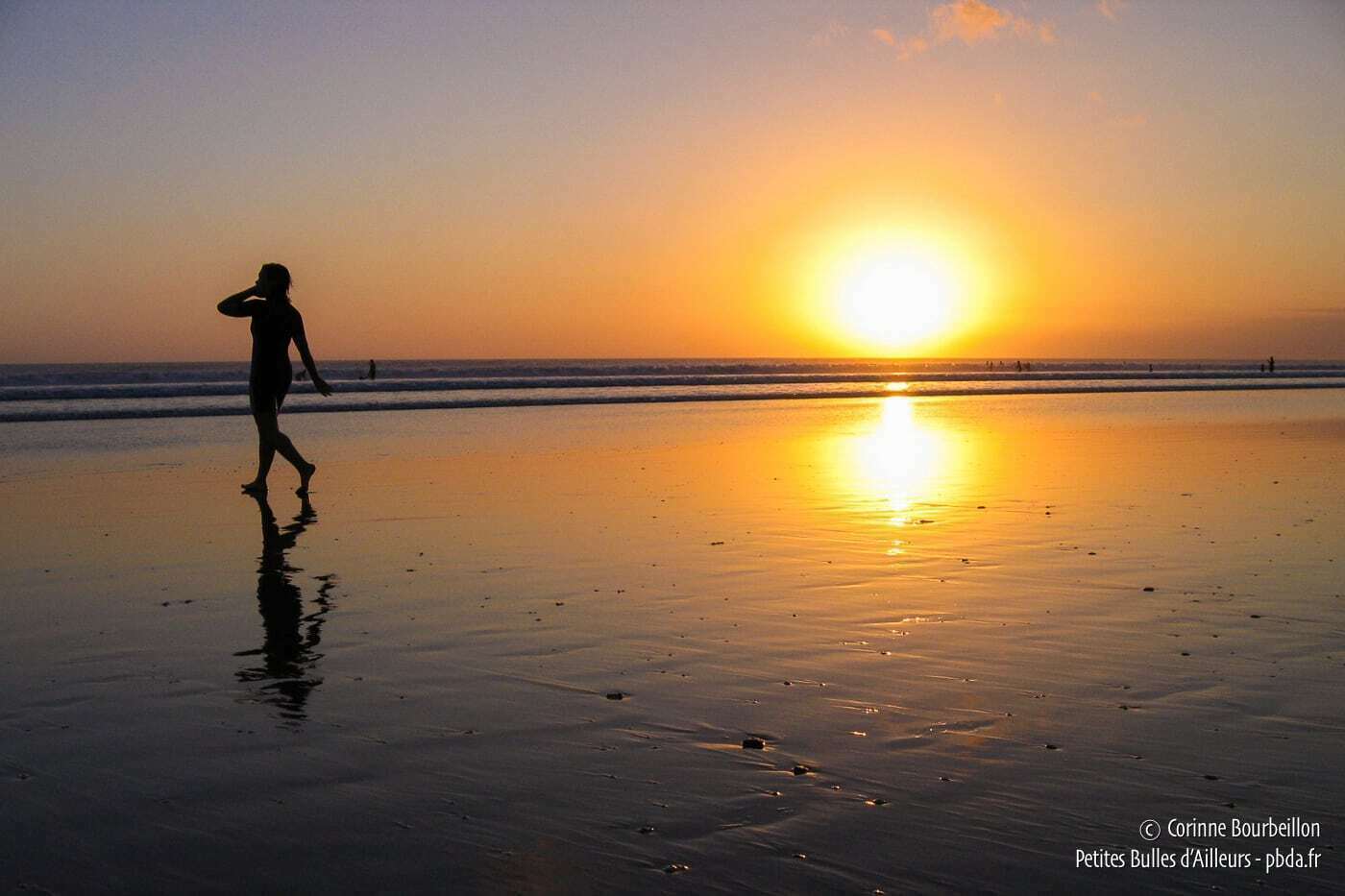 "And you're going on your own? Oh, I could never do that! » If you knew how many times I've heard those words...

For many people, travelling solo is inconceivable, especially if you're a woman... ???? I can hardly understand why. On the contrary, it's a lucky opportunity to be able to travel alone. And I find a lot of benefits in it.

When I talk around me about my solo escapades at the far end of the world, I get the feeling that I'm taken (at your choice) for a kind of super brave amazon or for a not very normal chick with asocial tendencies... People are weird.

One would think that mentalities have hardly changed since the past centuries! Even today, in the 21st century, a woman should not travel without a chaperone!?

So yes, I'm a girl and I'm going alone. There's nothing extraordinary or incomprehensible about that. I'm not going to give up the pleasure of discovering other horizons, under the pretext that I don't have anyone available to go with me? Huh?

It's neither difficult nor risky. It's not sad or unhealthy. Quite the opposite!

Alone but not lonely

Those who have never tried it before don't realize it, but a solo trip is rarely synonymous with loneliness. You never meet more people than you would when you travel alone.

This is even more true when, like me, you practice an activity like diving, which allows you to "socialize" easily, around a common passion. When you spend a whole day on a boat with other divers, it creates bonds. Often, we meet after the evening for a drink or dinner...

In general, people, whether tourists, expatriates or locals, come to you more easily and engage in conversation when they see that you are alone. So much so that it even becomes difficult to enjoy moments of solitude when you are looking for them!

I remember when I was on the island of Tioman, Malaysia. That evening I had declined an invitation to dinner with my diving companions, eager to finally have some time to myself to write in my little notebook, painfully, without being disturbed. As a result, it was the waiter at the restaurant where I hung out who couldn't help but come and talk to me after his shift. The kind of guy I would classify as a "nice bugger". Not mean, but a little clingy. In such cases, my notebook is a formidable weapon: I explain that I have work to do, I'm a busy travel writer with lots of things to write, and the guy, impressed, leaves me to my "work"...

In Pemuteran (Bali) last summer, I didn't spend a single evening alone. One time, in a tiny local restaurant where there were not enough tables, a couple of very charming Germans invited me to come and sit with them and we spent a pleasant evening chatting. Another evening, it was an American couple with whom I had dived during the day who insisted on having me at their table. The next day, it was the Balinese who ran the mini-market near my guesthouse who invited me to the party they were organizing for their son's wedding....

And then there are people who become friends along the way. In Malaysia, from Perhentian Kecil to Tioman, I had the pleasure to meet again Maz and Alex who were on a charity journey. In Sipadan (Borneo), it was with my diving buddy Sabrina, who was traveling solo too, that I became friend with. In Sulawesi, it's a whole Dutch family met in the Makassar-Rantepao bus who became traveling companions and friends, for a good part of my trip, to the Togian Islands. Still in Sulawesi, it's with a very nice Spanish couple, Joseba and Ana, that I made motorbike rides in the villages and rice paddies of Toraja country. On Siquijor Island, Philippines, Marika and Shareef, my bungalow neighbors, a Swiss-Maldivian couple, became buddies. We had memorable evenings with Neal and Raul, the two Filipinos who worked at Kiwi Dive and showed us the island...

Anyway, anyway. I forget a lot. I can't count the walks, drinks, food and parties I've been invited to. No, really, it's impossible to stay alone when you travel alone!

You can eat or not, at any time you want. You can stick or not stick in a cool place you found nice. You don't have to be accountable to anyone. It doesn't take two people to love the guesthouse you visit. You don't have to want the same things at the same time, nor do you need to compromise on certain activities or excursions...

I get the impression that this freedom also makes me more receptive, more aware, more available. Without company, you are more sensitive to the atmosphere of a place. More open, perhaps, to other cultures, other mindsets, other ways of thinking.

The fact of not being monopolized by the presence of a travel companion, who speaks the same language as you, who comes from the same world as you, it purifies the sensations, the mind, the sight. You get a better sense of the country. You have a more personal approach, a more personal outlook. No interference, no influence, however benevolent and accomplice they may be.

It's even a great advantage, sometimes, to be a "lonely traveller". Since you're alone, other women dare to approach you. You start a conversation, you inspire curiosity, they want to know everything about you. Of course, they are surprised that you travel like that, without a husband, without children, without anyone. At the same time, they assure you (often out of politeness) that they find it very nice. You reassure them a little, by saying that you still have friends, with whom you dive in or go for a walk...

Being alone opens doors, breaks down shyness. Yours and other people's.

So yes, there are many small disadvantages to travelling alone, but they seem minimal to me, compared to the infinite freedom that solo travel brings. They are in fact disadvantages of a purely material nature.

For two people, accommodation is bound to be cheaper, since you divide the cost of the room. And nothing irritates me more than the resorts and hotels that impose an exorbitant surcharge on travellers who have the audacity not to go in pairs... Grrr. I hate all these tempting rates that you can find on the web with this charming parenthesis at the end: (double occupancy basis).

The same is true when it comes to paying for private transportation with your own small purse, when there is no public transportation. But until now, I have often managed without too much trouble to share the fare of a taxi, a boat, with other travellers I have met along the way.

The most annoying thing, in fact, when you travel alone, is to have a problem with money: loss or theft of a credit card, or cash... With two people, the card or the money of the other remains. When you can only rely on yourself, you have to be careful. I've been through this three times.

The first time was at Siem Reap airport (Cambodia). I didn't have enough dollars to pay the departure tax, which was higher than I thought, and the only ATM at the airport only accepted Visa cards (and at that time I had a MasterCard). I was ashamed of myself, but I begged one by one for the few dollars I was missing from the tourists waiting there with me. People were nice and helped me out.

The second time, I simply lost my card in Thailand... at the bottom of my bag (yes, yes, it happens). I finally found it, well hidden in a pocket that I never use, right after I made an opposition! I was good at phoning my sister and asking her to make an expensive money transfer for me from Europe. Western Unionmoney transfer for me from Europe, just to have something to finish the holidays.

Finally, the third time was in Bangkok, at the end of the stay. I wanted to do some shopping at the MBK Center and get some cash in bahts. Except that after three weeks in the islands, I had forgotten (yes, yes, it happens) my PIN. I typed a wrong PIN code three times in a row and my card was swallowed. I was able to retrieve it because the bank where I wanted to make the withdrawal was open. But the card had been automatically cancelled... Luckily, I had enough cash left for the small expenses before I left. But I had to give up shopping.

Apart from these minor material mishaps with no consequences, nothing untoward has ever happened to me during my solo trips. My optimistic temperament leads me to believe that it can only go on like this.

Of course, I never hang out alone at noon in bad neighborhoods. But I don't do it at home either. Whether at the far end of the world or in my own country, I retain a modicum of common sense. Judgment is more than enough, in terms of taking appropriate precautions. No need for a how-to book on survival in an alien land for the female gender…

A book to recommend

For those who are more worried, I invite you to play it down with this nice book, full of useful tips and testimonials from more or less intrepid adventurers (including my own), co-written with humour and talent by my friend, Quebec blogger Marie-Julie Gagnon:

→ Travel for girls who are afraid of everything

In all honesty, I've never felt insecure. And I've never been mugged while travelling (it only happened to me in France, in Paris and Rennes, in everyday life). Many girls ask me this question, but overall, the South-East Asian countries where I have travelled are safe places for a tourist travelling alone. Once or twice, I have invented a husband who was going to join me soon, just to discourage some nice people, but that's all.

I'm not taking any risk, really, in flying away with my little person as my only company to a faraway place. I don't travel to countries at war. I don't put myself in physical danger. I don't perform any feats. I am not an explorer who takes risks. Just a dreamer, a wanderer...

The only risk I run is that I will be disorientated and transformed, that I will come back richer in encounters, memories and emotions. To get to know myself better too. Facing yourself, far from your usual landmarks, is an interesting and instructive experience.

You rediscover yourself in a new light. You find yourself with qualities and resources you never thought you had. As well as weaknesses. But then you know where you stand in relation to yourself.

And frankly, it's very rewarding to know a little bit more about who you are. Once you've been lightened up, when you have nothing but a travel bag to carry around, you're clearer about who you are. You tell yourself fewer stories, you have a better understanding of what's really important.

Then it helps with everyday life. From this point of view, travelling solo, whether you are a man or a woman, is an invaluable experience.

→ Practical information to organize your trip to Raja Ampat