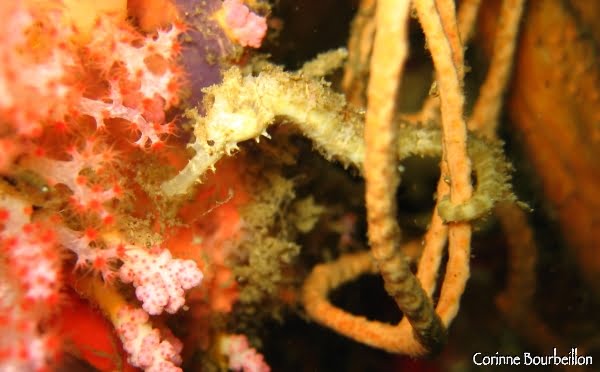 My first dives on Koh Phi Phi far exceeded my expectations. Despite the tourist pressure, the funds are very rich.

Koh Phi Phi under the water

I'm spoiled for my first two dives, on so-called "local" sites close to Phi Phi Ley, not far from Phi Phi Don (the main island where we sleep). No less than two "leopard sharks" (zebra sharks), seahorses which are not easy to find and a turtle... Not to mention the usual local fauna. I slide some pictures, but it's a festival!

Our dive-master, a young guy named Ryan, reads One hundred years of loneliness of Marquez, in English, on the boat. Obviously more interested in reading it than diving. Underwater, he certainly does his job well, but traces a little too quickly for my taste. Barely enough time to take pictures! Obviously a little jaded to walk around with diving tourists, the boy...

That said, monopolized by my brand new stab and brand new Legend Expander Legend (see page Equipment), I make few pictures. But I'm making up for it on the second one! The proof.

Then, hardly tired by this double immersion, I tackle the climb to View Point, the aptly named. There are now "tsunami evacuation route" signs everywhere along the roads of the island.

From there, we have a breathtaking view of the two beaches back to back. Probably the best-known panorama of Phi Phi. As usual, when it comes to making an effort, even modest, in these latitudes, I'm swimming. Fortunately, the ice cream vendor is waiting for tourists on arrival ...