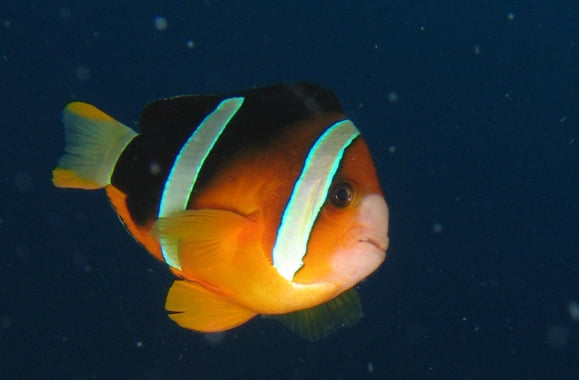 The world of Nemo

The clownfish is the most popular tropical fish, thanks to the movie Finding Nemo (The world of Nemo). By sorting in my photos, I rediscovered with pleasure the clownfish that I flashed over the years. Here is the photo gallery of my little world of Nemo to me.

All the photos below were taken with my small Canon Powershot A95 compact camera.

Addition - July 2012 : What progress has been made since then ... The photos below are from before 2009. I now do much better with my SLR, the Canon Eos 7D. See the photos at the end of the link below :
→ Clownfish have a dirty mouth


As you may know, the clownfish is also called Anemony-fish in English, because of the anemone in which he lives. Hence the name of Nemo (atNEMOny fish) for the little Disney cartoon hero.

Clownfish are curious, but fearful most of the time. At the beginning of the film, we can see Nemo's daddy go out and then carefully return several times to the anemone, before going out again ...

It's the same with real clown fish. They keep moving and squirming and hiding and sinking into their anemone. Not easy to photograph!

Beware of the anemone kingpins!

But some are more fearless. Once, during a dive at SipadanI witnessed some amazing behavior from a very brave little clownfish.

As I was leaning over the anemone trying to take a picture of it, it came out in a hurry and ran straight into my partner's mask to bang into it. Bing!

Quickly, he returned to take refuge between the stinging tentacles. Then he started the maneuver again. Re-bing! I even managed to get the picture...

Have you ever been attacked by a clownfish?