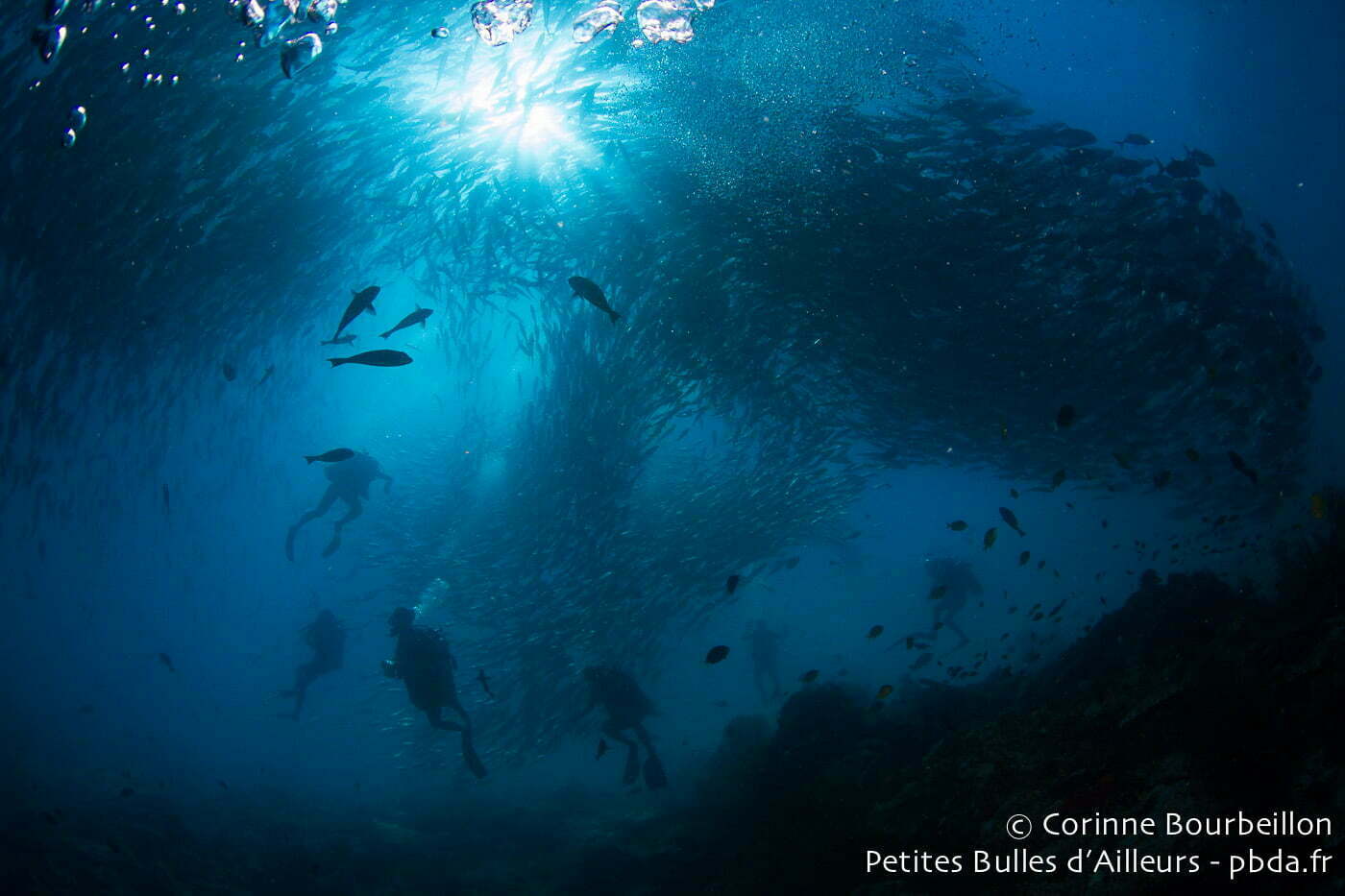 Diving in the blue of Borneo

I'm coming back from Borneo! Highlight of the trip: the dives in Sipadan, Malaysia ... Yes, for me, Borneo has more the color of the sea than the jungle.

Oops, I haven't published anything for a long time... 😡 The fault lies with the non-existent, random or ultra-slow internet connections during my trip to Borneo, in this month of July 2013.

Yet I like to tell my journeys as and when, almost live. The sensations are new, discoveries all fresh ... But there, it really was not possible. I only managed to put a few pictures on the Facebook page Bubbles Underwater & Beyond.

I have been back in France for a few days, but I still have my head there, in Borneo ... Underwater, most of the time. ????

My Borneo to me is more blue than green. I spent more time above the coral reefs than under the canopy of the jungle.

As always, diving was the main theme of the trip ...

The top! I wanted to see Sipadan again, where I had already dipped in 2006 and 2009. And Sipadan kept his promises: sharks and turtles in abundance, whirlwinds of barracudas and jacks ...

Located in the Malaysian part of Borneo, the island is a protected area, where attendance is limited to 120 divers per day. Underwater, Sipadan remained just as spectacular as when I first visited in 2006.

As for the diving around the neighboring islands of Mabul and Kapalai, it has nothing to do with the big show offered by Sipadan, but it remains very interesting for the muck-dive and the small fauna.

The archipelago of Derawan, on the Indonesian side, where I plunged in 2009, was rather disappointing: I did not manage to see so many "big" things in Maratua (a meager barracudas bench on lucky days) ).

But most alarming, especially, is that the Sangalaki Mantas have disappeared, or have become very rare, whereas they were very numerous and very easy to observe 4 years ago. We were almost sure to meet them around the island ...

There, we did not see anything. It seems that other tourists divers have seen one, a few weeks before my stay there, but by far, and from the boat. In short, the meeting with the beautiful manta rays seems to have become much more random

The area of the Derawan Archipelago, of which Sangalaki is a part, is unprotected, and these harmless giant rays are now very fished for their gills that end up in soup (like shark fins). The dynamite fishing is also still practiced in the area (we have heard several times underwater explosions). In short, in my humble opinion, the situation is not going to get better ...

The Kakaban sites are the ones I finally found the nicest, the richest in coral and wildlife. And then there is always the amazing jellyfish lake that did not sting that I had discovered in 2009. Regarding my journey of 2013, I posted these new articles on Kakaban:
→ Snorkeling in the Kakaban Jellyfish Lake
→ Multicolored dive on Kakaban reef

Finally, the island of Derawan itself remains very nice for the muck-dive. Turtles are found everywhere in the archipelago. To read at the end of this link:
→ Derawan, the turtle archipelago

Finally, I dive a little around Pulau Gaya, off Kota Kinabalu, which I did not know. But a big storm had stirred the bottom a few days earlier, so the visibility was particularly bad and did not allow me to really appreciate the sites. There is, however, plenty to do with the small tropical fauna and muck-dive.

Well, I'm just back home and I already have the nostalgia for Borneo ... I console myself by plunging into the blue with my images. There is enough to do: more than 3,000 photos and videos stored on the hard disk.

Of course, I come back to tell you all this very quickly! You can always find all the articles for this trip by clicking on the link below: