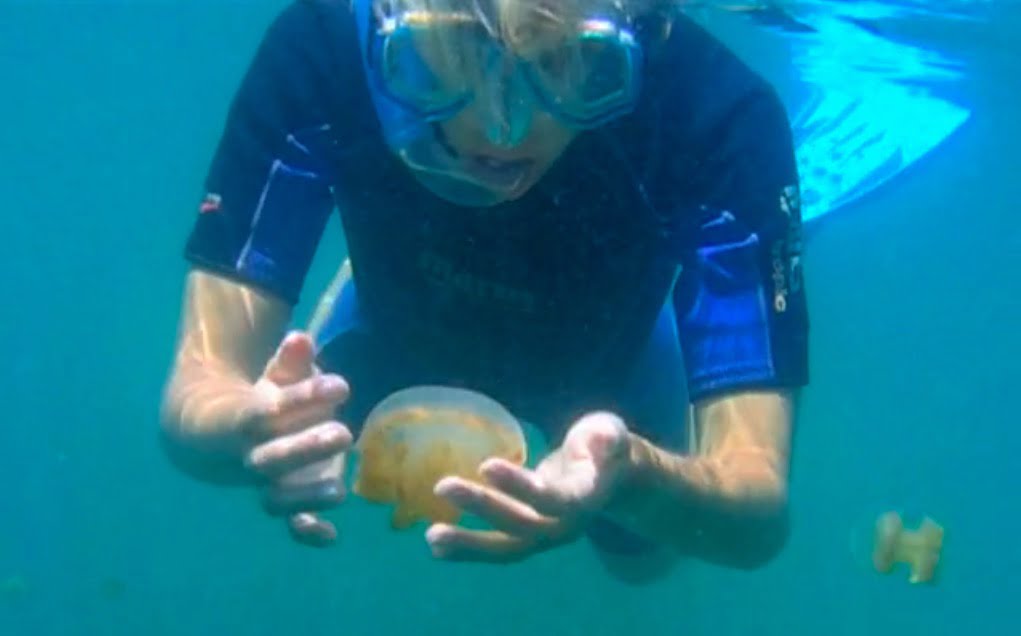 Kakaban, the island of jellyfish

It's a deserted island. In its mangrove necklace, it holds the jade water of a huge lake, full of jellyfish... that don't sting! Small video and photo walk in Kakaban...

There are only a few places in the world like this one. The most famous jellyfish island is Palau, Micronesia. There are others in the Raja Ampat archipelago, in West Papua, Indonesia, which are less accessible.

And then there's Kakaban, also in Indonesia, on the east coast of Borneo. I'll take you there! 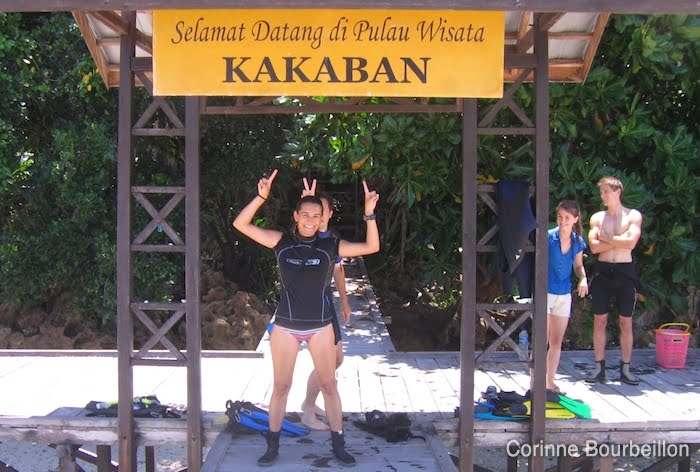 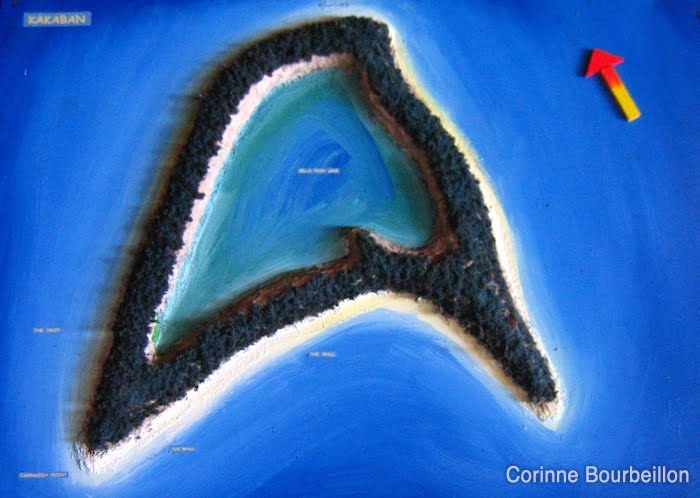 Kakaban Lake is slightly above sea level and its depth is about 17 meters.

A movement of the earth's crust elevated the island more than 10,000 years ago, trapping jellyfish, algae and various other small marine creatures. Finding themselves without predators, the jellyfish have lost, over time, their urticating power. 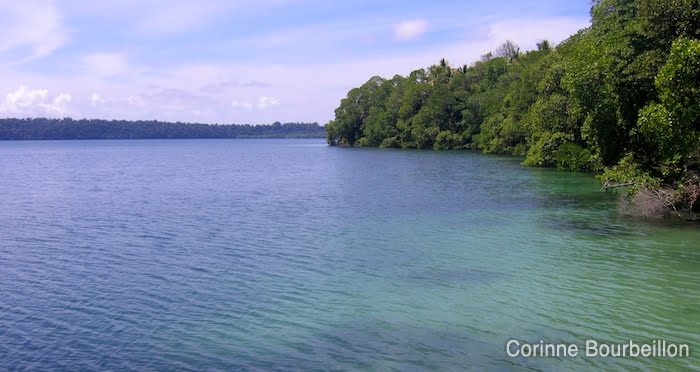 It's one thing to know that jellyfish do not sting. It is another to slip into this warm, greenish and brackish water, and to check for yourself that the famous jellyfish are harmless ...

Immerse yourself in the atmosphere, with the video below:

UPDATE. I returned to Kakaban in 2013, four years after the little expedition I'm talking about here, during a new trip to Borneo. Kakaban Island is much more crowded than before. From now on, it is forbidden to wear flippers, so as not to injure the jellyfish. Better also not to touch the jellyfish as we did ... Certainly, they do not bite, but it is we who risk harming them forcibly, if all visitors who parade in numbers now have fun doing the same ... C is a fragile ecosystem and the exponential number of tourists coming to bathe in the lake risks weakening it even more. In short, I should not have made neither film nor show this gesture. Mea culpa. I redid a small video in 2013 (with my reflex acquired in 2010, the Canon Eos 7DI've also made a similar assembly for the wink of an eye with my first excursion. I let you discover it below:

Below are the links to my new posts for 2013 on Kakaban : 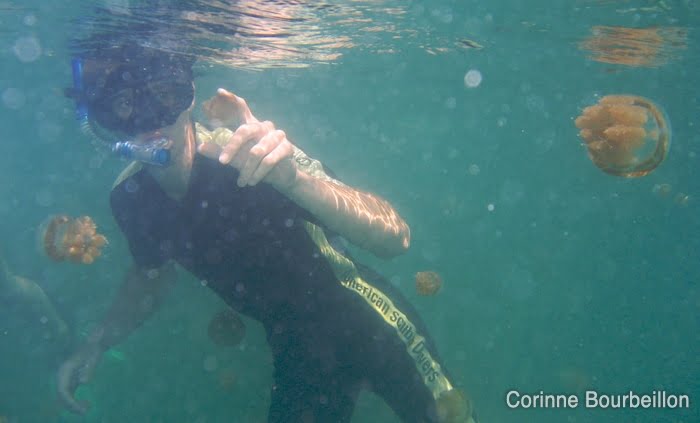 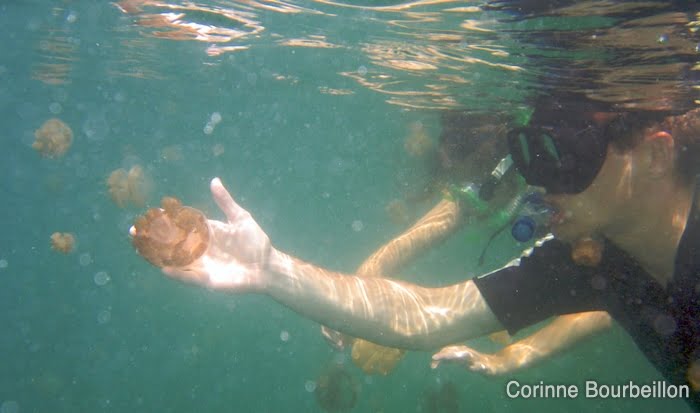 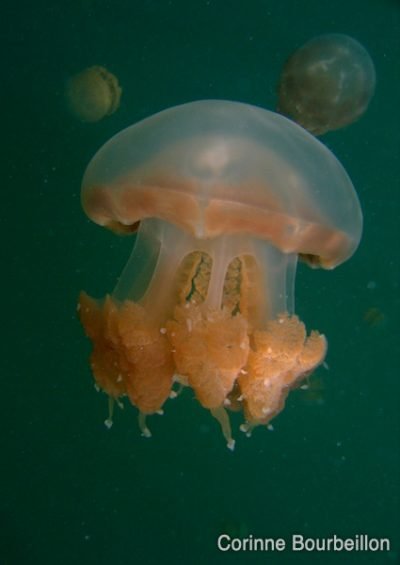 There would be three to four different species of jellyfish in the lake. We only found two. The small brunettes, the most numerous, we see in the video, and some others a little larger, white and translucent.

It is all the same a funny thing, to immerse yourself in this soup of jellyfish ... After the first apprehension, where we only risk touching with the tip of our finger these funny jellyfish, we dare finally approach her face, to take a closer look.

The farther away from the dock, the more of them. It's amazing!

It looks like small translucent hearts beating, mini-planets immersed in a cosmic soup.

Indifferent to our presence and our clumsy splashes, they are running in all directions, swimming obstinately, most often sideways or upside down. Because of the sun, the heat? Mystery.

In any case, my underwater box does not tolerate the heat of the rays in the murky water. After a few pictures, the interior is covered with mist.

I have to stop the images and then just enjoy the show with my eyes, which is not worse…

The access to the lake itself is relatively easy, contrary to what I was afraid of the stories of those who preceded me here a few years ago, as Yann and Marie Ange.

The place has probably been converted since then. There is now a long wooden footbridge that crosses the small piece of jungle and mangrove separating the sea from the lake. In five minutes, we're there! 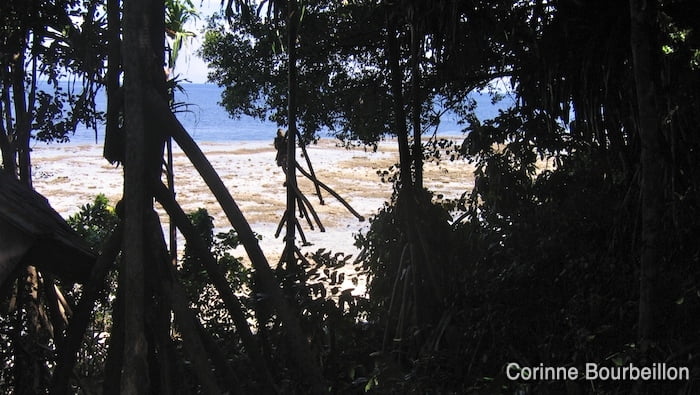 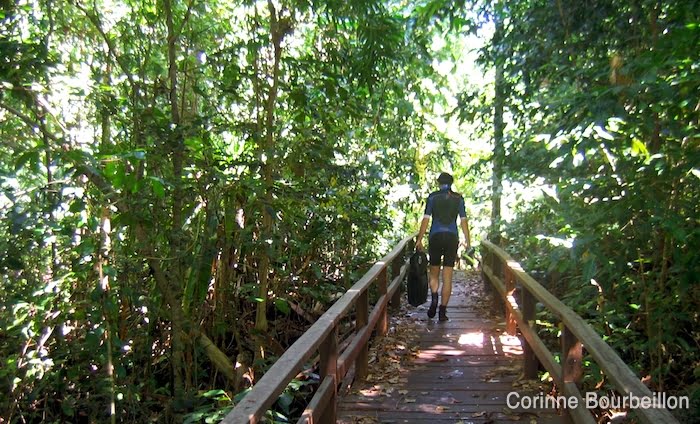 The trickiest part of the trip is actually to reach the island from the boat, or back. We were a small group of eight, not all equipped with boots or sandals to walk without cutting on the dead coral beach.

Becky, the young English girl, had only flip-flops and her flippers (which we put on barefoot). But she is lucky to have a real gentleman for a boyfriend: Paul carried her on his back to cross the dangerous strike!

We arrived at a very low tide, and even when properly fitted, it is not easy to advance in the shallow water, trying not to spoil the living coral branches, without stumbling on dead debris. roll under the sole. 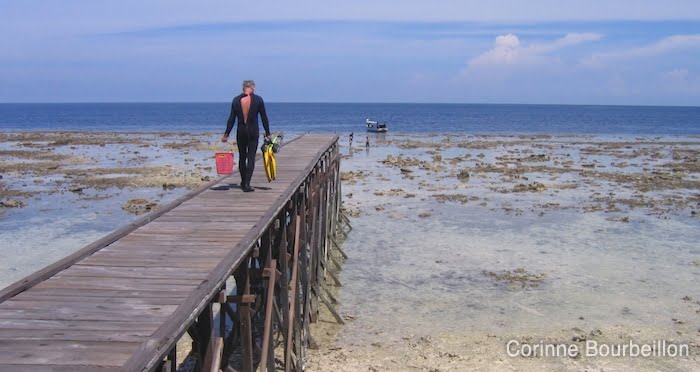 Fortunately, no sore to regret this time ... And this strange and fascinating lake deserves some effort. With the mantas of SangalakiIt was the other "curiosity" in the area that I was anxious to see.

However, as I arrived at the end of my stay, and had to spend two dry days in Derawan, because of my stingray stingI almost missed Kakaban ... we planned to go there the day before, actually. But a big storm, with driving rain and rough sea, forced us to postpone our small expedition.

I watched anxiously for the next dawn... Luckily, the sky stayed clear! And we were able to embark as planned, in an old wooden boat with a dusty engine.

After the lunch break on the pontoon and the amazing jellyfish tour, we went back to the boat for our second dive on Kakaban Reef ... But I will come back to tell you in detail my dives in the Derawan archipelago, here a few days.