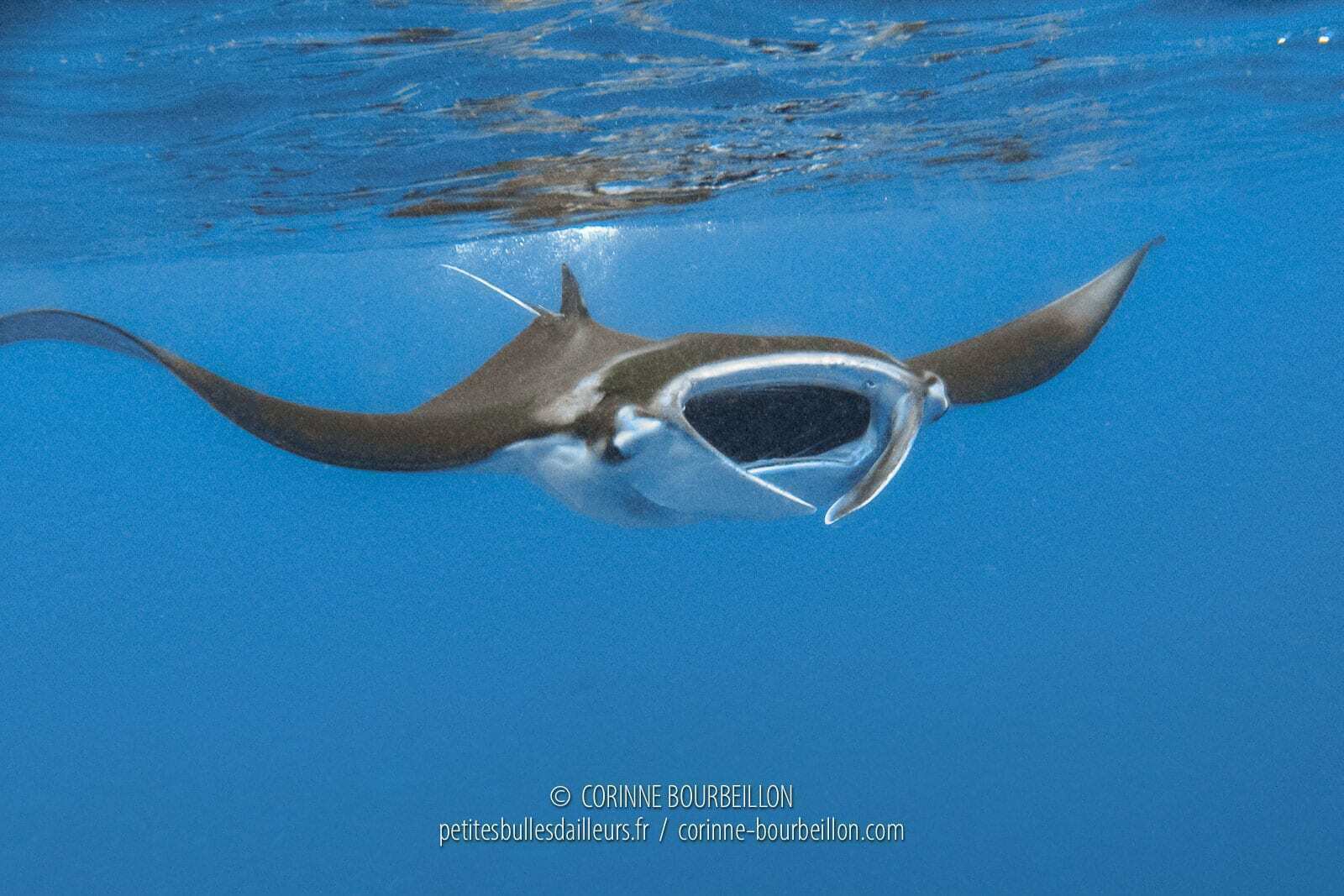 To see the manta rays evolve, from close up, it's an extraordinary spectacle... (Sangalaki, Borneo, Indonesia, July 2009)

July 26, 2009. I left Derawan and its archipelago today. I realized this dream I had since the beginning of this Indonesian journey in Borneo : swim with manta rays,, in the waters of Sangalaki !

First of all (because I am always asked this question): no, large manta rays do not sting. They do NOT have a stinger, and they are totally harmless (unlike the small stingrays, but I will talk about that below...)

I start by giving you some pictures of these magic moments with manta rays, in the waters of Sangalaki (an island of the Derawan archipelago near Borneo, on the Indonesian side)... These graceful giants are powerful, fast. You have to paddle hard not to lose sight of them!

At ground level or deeper, they seem more aerial than aquatic. They hover and split the wave of a fin flapping, stretched like a wing.

You can easily go to meet them, simply by snorkeling (PMT), or by scuba diving. I've tested both with pleasure...

Added October 25, 2009 : I published a new post on the Sangalaki Manta Rays, with the video mounted → Excursion to Sangalaki. I give it to you below too:

Swim with mantas in snorkeling

The first time, it was from a big boat with powerful engines, chartered by pilots and mechanics of the MY F (Mission Aviation Fellowship). It is a Christian American organization that has bases and planes all over the world. True missionaries, who do not forget to say the blessing before swallowing their nasi goreng (Indonesian fried rice). They rally the isolated populations for humanitarian and religious purposes.

Based in Tarakan, they were a small group of people who came to spend the weekend on the island of Derawan, with women and children. Paul and Becky, my English fellow travellers, bumped into them the day we arrived on the island. The Americans kindly offered us to take advantage of their boat for a snorkeling trip in Sangalaki. We obviously jumped on the occasion!

I don't do much snorkeling, and it's not at all the same feeling as diving. I'm not as good a swimmer as I am a diver, and I always feel a bit "naked", vulnerable, without my wetsuit or regulator, moving around on the surface, tossed around like a small cork in the swell. Much less comfortable for the pictures...

It's a funny thing to jump into the water, like that, just with his snorkel, to approach the black fins seen spurt in the foam between two waves.

But then... When you put your head in the water, what a show! A real ballet.

It's all about keeping up with the rhythm, between the twists and turns of the mantas. I give you below some small raw video sequences, so that you can appreciate the majestic "flight" of the beast.

When one of them decides to keep you in the curve of its trajectory and approaches right, gaping jaws, all at his feast of plankton, a little shiver runs down your spine. You drink the cup in your snorkel and stop palming so as not to break the spell.

The beautiful continues its momentum and evades you smoothly, without effort, offering you its milky belly by way of goodbye.

Meeting with the mantas in diving

The second, more stealthy encounter was made by diving a few days later. I was underwater with a ski instructor, Philippe, and his son Julien (I never met as many French people during this trip as in Derawan!).

We crossed a little too far, alas, the road of an enormous manta, all black, this one. Like a real sea devil, with rolled "horns", it did not deviate from its trajectory, and continued, impassively, its slow flight in the blue...

We were lucky to be able to admire the manta rays. They are, it seems, less numerous than in the past. The previous week, tourists went several times to the site without noticing one.

Finally, this so beautiful first day in Sangalaki ended in pain, for me. I was stung by a stingray. In other words, a beast stingray with blue dotsThis is a very common species in these tropical waters, a miniature but venomous cousin of the harmless large manta rays. Hidden in the sand, at the edge of the beach, it stabbed me with its poisonous sting in my left foot while I was returning to the boat.

I had my diving boots and I was walking carefully. The dart is on the side of the foot, near the little toe, just above the rubber of my sole.

The rangers who guard the island since the Sangalaki resort is closed brought a tub of very hot water to relieve the excruciating pain. Ah... this reminds me of my Rescue ! Yes, the venom of stingrays (is thermolabile, which means that its toxicity decreases at a certain temperature.

Then I gritted my teeth on the boat until I got back to Derawan. It does not show at all on the photo below, but I hurt, really badly.

I'm brave in the midst of all these caring Americans, and I even find the strength to wince and smile like Indonesians every time they get their picture taken, but this return has been a torture .

I was the attraction of the day in the village. A nice lady took me on her motorcycle to the small clinic where, by chance, a doctor was present that day. A young woman who spoke perfect English, who took care of me.

Hot water, anaesthetic injection, incision to clean the inside of the wound. Then medication to avoid infection and prohibition to go in the water for three days, the time to heal...

Three days of forced rest, therefore, watching the turtles from the pontoon, without ploufs nor snorkeling... what a torment!

But I am doing well. My foot soon swelled up and looked normal again. Marjolijna young Dutch woman who is doing her doctoral thesis here (she studies Derawan turtles and even cleans the beach edges of garbage) was less fortunate than me.

He had the same misadventure with a stingray the day before yesterday. Except the doctor wasn't there. And it was the dispensary assistant, less gifted, who butchered his foot, less carefully.

As a result, his wound looked worse than mine... Stingray stings are common here, it happens very often, to islanders and tourists alike.

I gave Marjolijn what I had left of sterile compresses. We all took them from our little travel pharmacies to allow her to disinfect the wound as well as possible and to soothe the pain in the meantime. I hope she will recover as fast as I did!

In the end, it's more dangerous than it seems, tropical beaches...

Updated August 26, 2009 : Marjolijn tells, on her blog, about her ordeal... Poorly treated, she ended up with an infection 😱 To read (in English) here :
→ About infections and stingrays