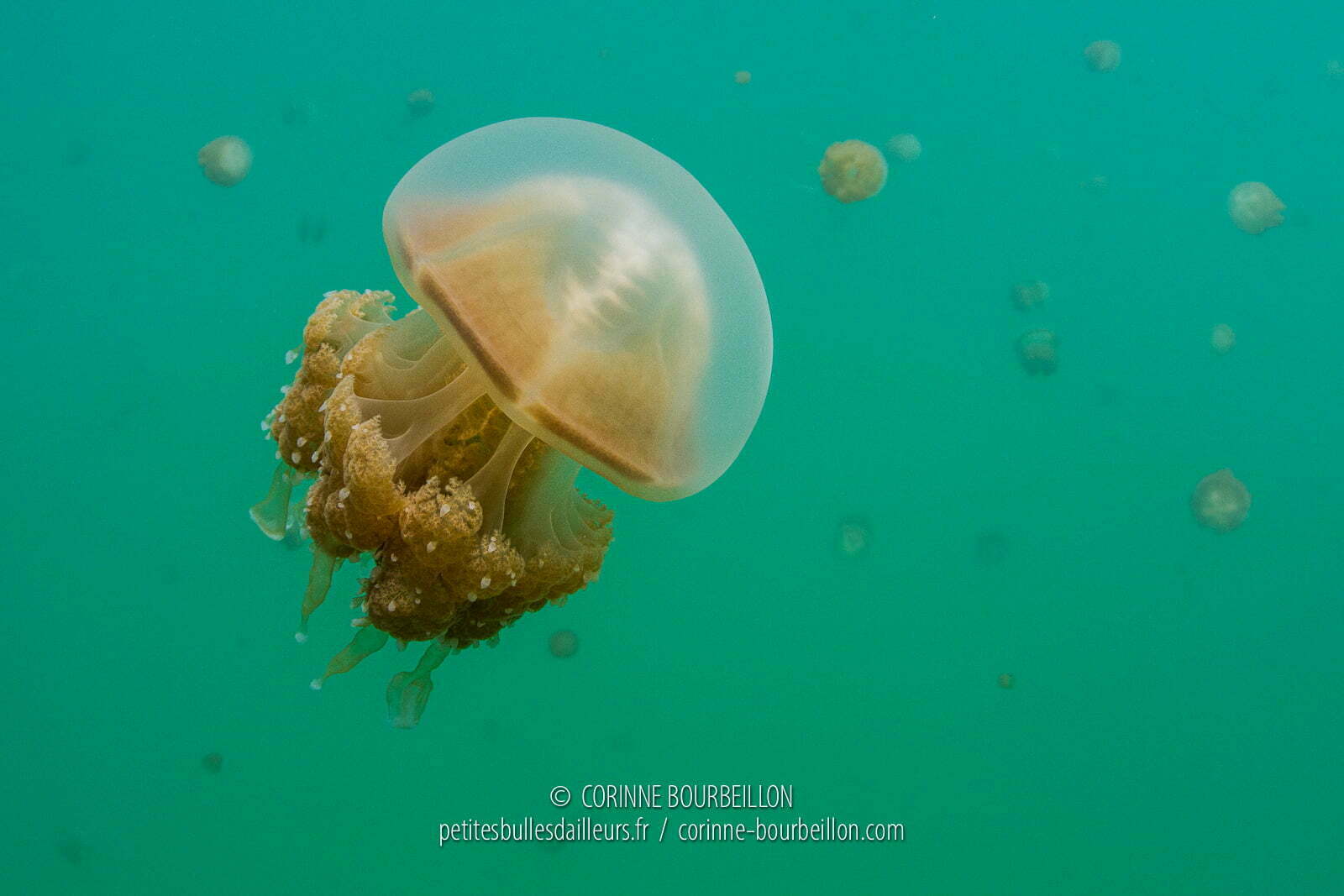 The further you go towards the centre of the lake, the more jellyfish there are. (Kakaban, Borneo, Indonesia, July 2013)

Kakaban and its lake with jellyfish that don't sting...

Borneo is adventure! I saw again the Indonesian island of Kakaban and its mysterious jellyfish lake. I even went back to swim there. The video evidence...

2009-2013. Yes, this is the second time I've been to the island of kakabanin the archipelago of Derawanon the southeast coast of Borneoon the Indonesian side.

In the game of the seven differences, we notice that a wooden gatehouse, painted in blue, has been built at the back, but above all that my Tribord lycra and my jersey are indestructible... 😂

I invite you to reread the article I wrote at the time on Kakaban:

Four years later, the place has become very popular. Groups of Asian holidaymakers arrive every day, strapped into beautiful orange lifejackets - as many do not know how to swim.

A small entrance fee of IDR 10,000 (less than one euro) and the signing of a register are now required for access to the lake. It is also now forbidden to swim with flippers, so as not to risk cutting the famous jellyfish in half.

Jellyfish that do not sting

It sounds incredible, but these jellyfish don't actually sting! Even though we know that, it always feels a bit strange, when we're swimming, to be in the middle of these gelatinous creatures, which we've learned to be so wary of...

The explanation would be the following: about 10,000 years ago, a geological phenomenon lifted the island, imprisoning marine animals, including jellyfish, inside a crater. The jellyfish, finding themselves without predators, eventually lost their stinging power over the millennia.

The proof in pictures, with the video below!

You will note, at the 15e second, the kindness and the good mood of one of our Indonesian dive guides, who did not want to let me carry on the wooden gangway, slippery in places, my heavy waterproof box, containing my 7D (see on page Equipment my equipment for underwater photography).

In any case, I had a lot of fun making a little film almost similar to the one I did, Four years ago.

UPDATE. It's better not to touch jellyfish like we did when we were swimming... They don't sting, of course. The danger is not for us, but for them. We are the ones who risk damaging them by force, if all the visitors who come in large numbers now have fun doing the same... Lake Kakaban is a fragile ecosystem and the exponential number of tourists coming to bathe in its waters could make it even more fragile. In short, I shouldn't have made this gesture or filmed it. Late awareness. Mea culpa. Above all, don't imitate us.

Kakaban lake side and sea side

There are other jellyfish lakes around the world. Those of Kakaban (Borneo, Indonesia) and Palau (Micronesia) are the best known.

In Indonesia, there are in particular Raja Ampat (West Papua) and also to the Togian Islands (Sulawesi).

As for jellyfish, I will have the opportunity to dabble with them several times, between two sea-side dives, during this stay of 2013because the resort Derawan Dive Lodge takes us regularly to make bubbles around the island, along the coral reef, splendid (I'll show you that in a future post).

It's fascinating to watch them. Hundreds and thousands of them are pulsating in the green waters of the lake, like beating hearts.

Between dives, our small group lunch on the pontoon, before or after the jellyfish tour.

And then we take advantage of the view on the sea side... Magnificent!