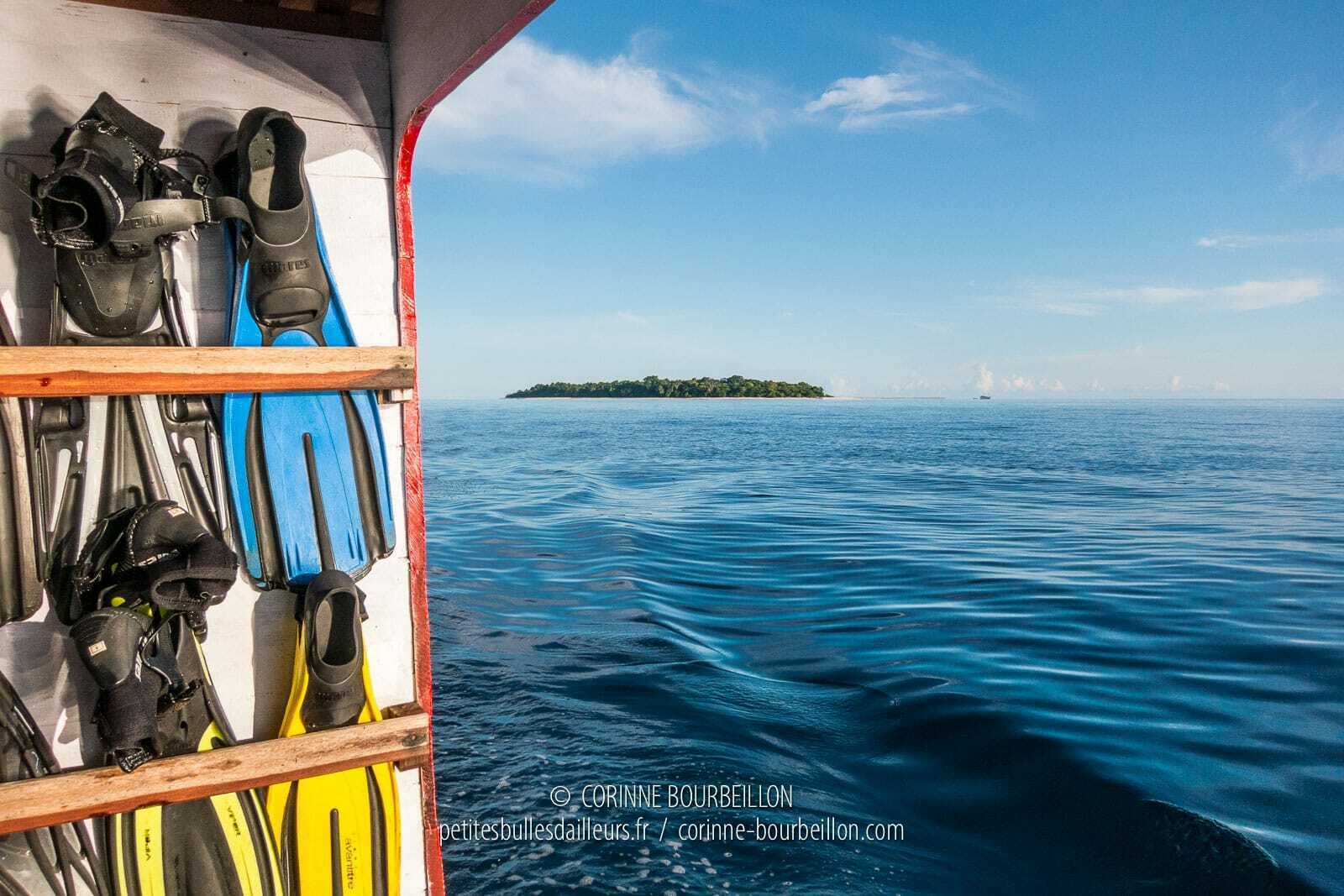 Sangalaki and Maratua: sadness and disappointment in the waters of Borneo

It's not all about multicolored backgroundsin the Derawan Archipelago (Borneo, Indonesia). Once famous, the islands of Sangalaki and Maratua are no longer, in 2013, the fabulous diving spots they used to be.

Four years ago, in July 2009, I had a first time the long trip to the archipelago of Derawanon the east coast of Borneo (Indonesian side), to see the manta rays of the island of Sangalaki.

The encounter with these graceful giants, at the time, was almost certain, both in snorkeling (flippers-masque-tuba) and in scuba diving. I can testify to this, at least for the July period, when I was there. In 2009, manta rays were frequenting the waters around the island.

Other travellers had made me dream and had decided to undertake the journey:
→ Dreams of mantas

Having followed in their footsteps, I too at the time kept a dazzling memory of Sangalaki. It was a magical sight. I talked about it here, in these posts published in 2009:
→ The mantas rays of Sangalaki
→ Excursion to Sangalaki

Alas, in 2013, there is nothing more to see. The mantas of Sangalaki have disappeared.

I already had some fears, preparing this new trip of 2013 in the archipelago of Derawan ...

I came across various reports from divers on the internet, saying that Sangalaki was not interested anymore. The lucky ones who have recently met a manta ray there are rather rare.

During this trip in July 2013, I only made one trip to Sangalaki. But even if I had done ten, I do not think I would have met manta rays. Our guides Derawan Dive Lodge were not too urgent to take us there, knowing we would be disappointed ...

We indeed wandered about an hour above the sand, small coral potatoes and dead coral debris, to no avail.

So I just "walked" my 7D underwater, for not much. And for lack of mantas, I served as a model for another sub - Bambang, a very nice Indonesian guy, who came to spend a few days of vacation in the area, with his wife and friends.

What's happened in four years? Why are there no more manta rays?

Our dive-guides were evasive at first, claiming that we could still see manta rays, when there was plankton... (Except that the last time they had seen one was almost a month ago and it was from the deck of the boat). Anyway, they finally agreed that the mantas in the area had probably all been caught, or almost.

In fact, manta rays (or mobulas) are victims of the recent Chinese market craze for their gills, which are now considered a delicacy - supposedly beneficial to health - in the same way as shark fins...

Small explanatory summary to read on 20minutes.fr :
→ The manta ray soup could cause extinction of the species
For more information, you can visit these pages on Mantatrust.org :
→ Gill Plate Trade
→ Manta Fisheries
Also read this recent article on the Stopsharkfining website:
→ The Global Threat to Manta and Mobula Rays

It's one thing to read articles about the ongoing extinction of manta rays. It is another to make the concrete experience, on my modest scale of tourist-diving, on the site of Sangalaki ...

Disappointment also at the Maratua Channel

Not far from the island of Sangalaki, the archipelago of Maratua is really beautiful.

All I did was take a few pictures from a distance, from the boat. Traditional villages with houses on stilts, small fishing boats going back and forth on the azure waters... Life seems quite peaceful here.

But I was disappointed by the underwater world of Maratua. There is a lot of dead coral and relatively little life - with the notable exception of the aptly named Turtle Point, where you are sure to find a large number of turtlessometimes very big.

The famous Maratua channel, the "Channel", crossed by a very strong current (normally a guarantee of abundant underwater life and schools of wriggling fish) no longer deserves its nickname of "Big Fish Country".

In question, fishing dynamite - still practiced today. Several times, during our dives on the neighboring island of Kakaban, we heard explosions under water ...

During this 2013 trip, I did six dives in Maratua, very uneven and never exceptional ...

Among the beautiful encounters: in addition to the turtlesa tiny bench of yellow-tailed barracudas of which I managed to make some pictures (below); a school of barracudas a little bigger but seen from too far away, in the blue; and an imposing school of humpback parrotsI've captured as well as I can the progress in video, in a fog of sand and debris lifted by their raid on the reef (I'm not putting it here, the quality is really rotten).

But during our dives, no sharks, no schools of jacks, no swirls of fish - nothing exceptional "big".

In short, a big disappointment - including for our guides, who seemed to hope better. Spectacular encounters may still be possible in Maratua, but there must be more luck than I ever had ...

I copy below what I wrote in my logbook, during my last dive at the Maratua Channel: "Disappointing. Nothing. We waited a long time in the cold current, with our hooks, to see something... nothing. Just a turtle at the end of the dive. »

Of course, I'm glad I went back to the Derawan Archipelago, for turtles, for the incredible Jellyfish lake of Kakaban and his falling full of life.

But to divers looking for thrills and a great show, I would say that in 2013 Sangalaki and Maratua are probably no longer worth the effort. such a long journey. Dynamite fishing and overfishing have already caused a lot of damage in this area. And it's not likely to get any better in the coming years...

(But as I mentioned earlier in my updates, in 2017 it seems that the situation has improved all the same. Ask about the forums from people who have been there recently)...)