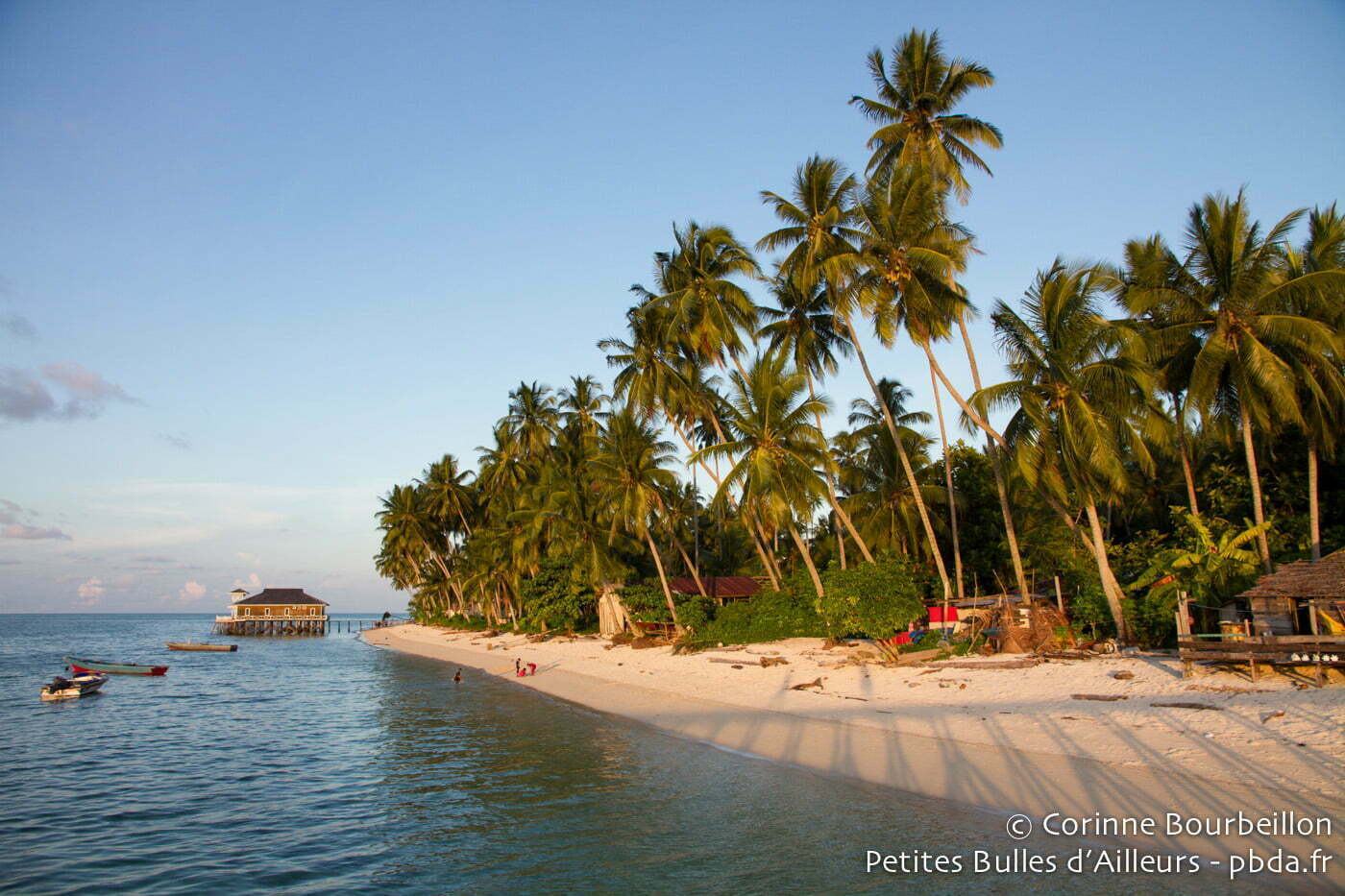 The island of Derawan, on the east coast of Borneo. (Indonesia, July 2013)

Itinerary: from Kuala Lumpur to Derawan in one day

Derawan is a tiny Indonesian girl on the east coast of Borneo. I had already been there in 2009. But for this 2013 trip, I have revised my itinerary.

Four years after my first passage, I wanted to see Derawan and its archipelago, the islands of Kakaban, Maratua, Sangalaki... Mission accomplished!

It was the first step of this July 2013 trip to Borneo.

I stayed a little over a week in Derawan, which has not changed much. There may be a few more guesthouses and small tourist shops than before, but the tiny village has remained rather peaceful.

Seen from the open sea, the island still has a small effect ... Coconut palms and cute white sand band. 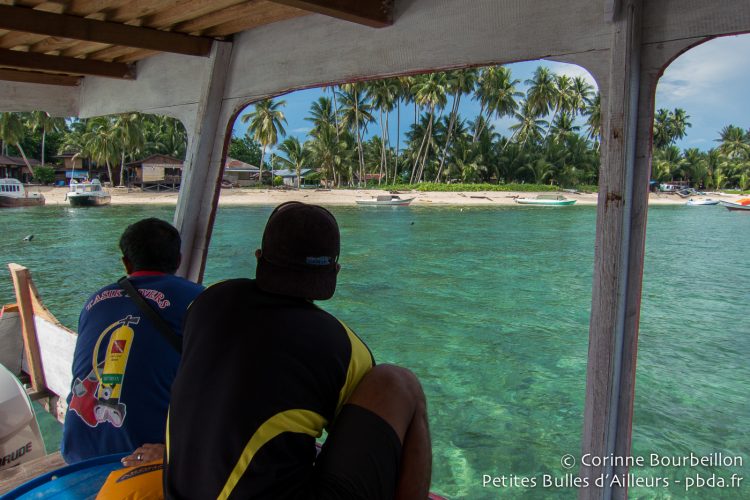 Derawan, it's far away. To get there, several itineraries are possible ... I managed, during this last trip, to complete the journey Kuala Lumpur → Derawan in the same day. During my previous trip, the Tawau → Derawan trip took two days ...

I get a lot of emails asking me for directions to Derawan. Here is a "practical" article that will answer a lot of questions!

A bit of geography to start with... Besides, this is often how I prepare my trips. By looking at maps. Nothing more inspiring! 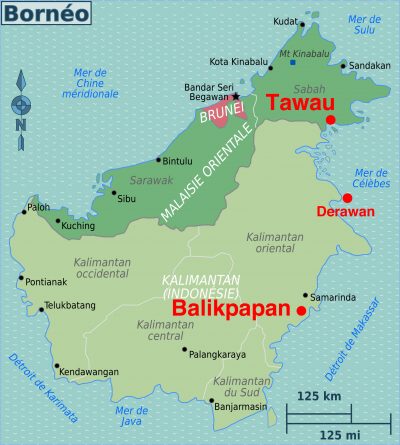 Derawan is an island located in the Indonesian part of Borneo, on the east coast.

As a reminder, three countries share the island of Borneo: Malaysia and Brunei North, Indonesia for three quarters south.

The two largest international airports closest to Derawan are Tawau (in the Malaysian state of Sabah) and Balikpapan (in the Indonesian state of Kalimantan).

As you can see on the map opposite, the route to Derawan depends on which side Borneo is approached: Malaysia or Indonesia.

Those who read this blog for several years may remember it. The itinerary, when I was planning my trip to Borneo from 2009, was already asking some dilemmas.

Then I inquired on possible routes to reach Derawan from Tawau.

Finally, once there, I had completed the journey Tawau-Tarakan (then Tarakan-Derawan) almost fingers in the nose. Not a little proud... 😄

Four years have passed since, and new connections by plane make it possible to envisage other routes ... New dilemmas.

I arrived by Tawau on the Malaysian side (Air Asia flight from Kuala Lumpur). I had chosen to go first to Sipadan / Mabul (Malaysia), then down to Derawan (Indonesia). After landing at Tawau, I went directly to Semporna, the port from which we embark for Mabul and Sipadan.

After my stay in Mabul / Sipadan, my itinerary to Derawan was as follows:

It took two days, even by direct Tarakan-Derawan by speed boat.

This time I opted for the opposite route: Derawan (Indonesia) as the first stage, Sipadan / Mabul (Malaysia) next. I decided for several reasons:

In short, my journey, for this first part of the trip to Derawan, was the following one, all in the same day, the day after my arrival in Kuala Lumpur :

I arrived at nightfall in Derawan. I'm very happy to spend this first Indonesian night on an island rather than in an ugly concrete town like Tarakan... And to be able to start the first dives the next day! 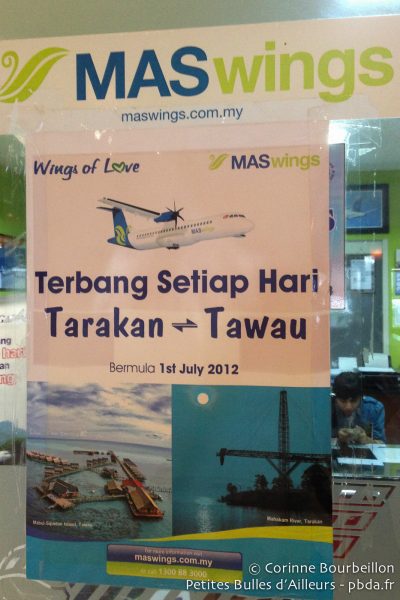 Thanks to the new MAS Wings Tarakan ↔ Tawau line, which I discovered while preparing for this July 2013 trip, the crossing of the Indo-Malaysian border through eastern Borneo has become much faster and easier.

The line has been open since July 2012 only and offers an alternative to the slow and overcrowded ferry that makes the connection in 4-5 hours.

MAS Wings is a subsidiary of Malaysia Airlines, a Malaysian national company, which has the advantage of not being blacklisted (unlike Kalstar for Berau↔Tarakan).

I do not know if I enjoyed a special promo period during this month of July 2013, but the rates were more than affordable. Berau-Tarakan on Kalstar was around 40 € the flight. Tarakan-Tawau on MAS Wings around 20 € the flight. So, I did not hesitate very long ...

Only problem: impossible to do Berau→Tarakan→Tawau in the same day. Kalstar and MAS Wings' schedules did not allow connecting flights. So I had to resign myself to spending a night in Tarakan. I didn't check if connecting in the same day is possible in the other direction: Tawau→Tarakan→Berau.

The only feasible option to complete the Derawan → Tarakan → Tawau route in the same day is to depart early from Derawan (around 6-7am) with a speed boat for a direct trip by sea to Tarakan. It takes 4 to 5 hours of very tidy crossing, and also very expensive (from 1.5 to 2.5 million Indonesian rupees, or about 150-250 dollars, depending on the year, the renter, the head of the client , the boat, the price of diesel, etc. etc., the ideal being to find other tourists with whom to charter the boat). It will arrive in the late morning Tarakan and catch the flight MAS Wings 1:15 for Tawau.

If you want to know the schedules, fares, connections, etc., don't ask me, I don't know them by heart. I have told you what I know above. And then all that can change very quickly, as often in Indonesia ... I recommend you to go and see for yourself on the sites of the companies:

→ Kalstar Attention, the schedules indicated online are not always up to date, and when I tested, it was impossible to make a reservation on the site. So you'll have to ask someone in Indonesia to check and book for you. [Update: Company disappeared in 2017]

→ Malaysia Airlines is reliable and tickets are payable online with a French card.