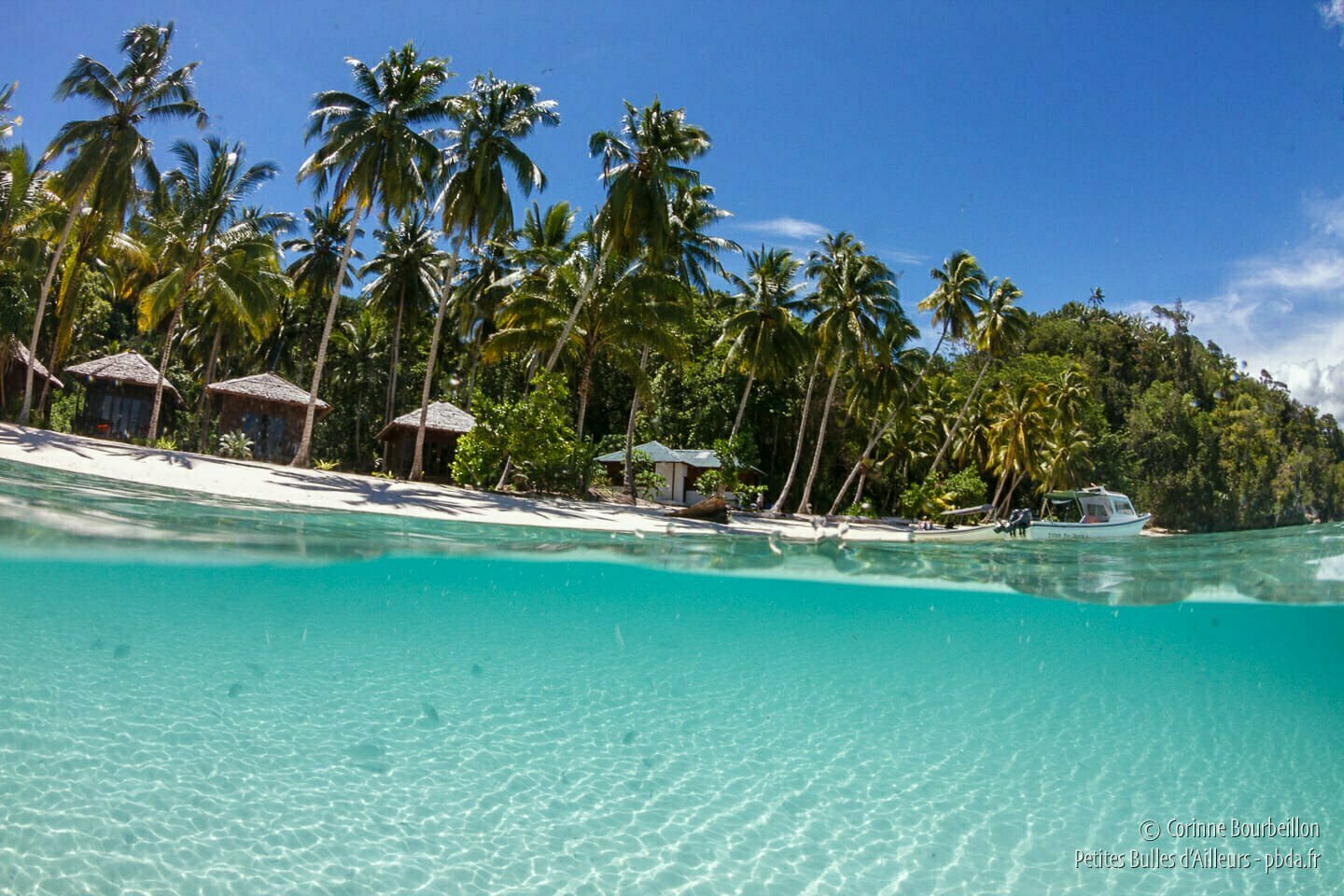 "Above all, don't stay under the coconut trees", they tell me when I get to Triton Bay. Yeah, the biggest danger here is getting a coconut on your head!

Here is the island of Aiduma and the resort Triton Bay Divers, where I landed on March 8, 2016, at mid-day, after forty hours of travel from Rennes, Brittany ... Yes, some people think that I'm a little crazy to accomplish such a journey, just to photograph fish and possibly get me some coconut on my head ... ????

Triton Bay (Teluk Triton) is located in the extreme east of the Indonesian archipelago, in the province of West Papua. From Europe, it's the end of the world. It's there (zoom in/out on the Google Map for a better view):

The aircraft survey was carried out without any significant hiccups or delays: Paris - Istanbul - Jakarta for the first international leg to Indonesia (on Turkish Airlines).

Then Jakarta - Ambon - Fak-Fak - Kaimana, on Lion Air and its subsidiaries (Batik Air and Wings Air) for domestic flights. Since Jakarta, there is no simpler nor more direct for the moment ...

After landing in Kaimana, the "capital" of the region, I have "only" an hour and a half of boat trip left to join Aiduma Island and its coconut trees, in the bay of Triton... Phew!

Of course, I'm very happy to finally arrive. And to discover my new "home" for a dozen days... I walk on the sand, soft underfoot, dazzled by the beauty of this little cove nestled under the coconut trees.

But I'm already being warned, with benevolent insistence: above all, don't hang around in the shade of the flippers! It is dangerous. "Coconuts are regularly removed from the trees near the beach, explain me Jimmy, from the resort Triton Bay Divers. But there's always more. So don't just stand underneath..."

This is not a joke. Throughout my stay, the shock of a coconut landing without warning on the ground will make me jump often. It's big and heavy, a coconut. And when it falls, it can hurt a lot ...

But after such a long trip, this Papuan island feels like a well-deserved paradise. An adorable beach of fine white sand. Some wooden bungalows facing the sea. A hill covered with dense jungle at the back. The sea and the coral in front... It's magnificent!

I wanted an immersion in nature, far from everything, I got it! There's no cell phone service here anymore. As for the internet, uh... Might as well forget about it.

Lobo, the nearest village, is on the coast of Papua, three quarters of an hour's boat ride from Aiduma Island. The coast is wild, with spectacular karst cliffs. Here and there, a few "camps" of fishermen. Here I am "forced" to disconnect.

At dawn and dusk, I learn to tame the thousand strange noises - screams, whistles and crackles - from the surrounding vegetation. It is the paradise of insects and birds (toucans and white cockatoo for the most visible). One morning, very early, I will even see the tail of a couscous at the top of a potentially killer coconut tree.

But it is for nature under water that I have come here. As Raja AmpatFurther north, Triton Bay is considered a "hot spot", a global biodiversity hotspot.

Far from tourist routes, still little known, this bay was explored by marine biologists of the organization Conservation International in 2006. They observed here the amazing walking shark, endemic of the region, and counted many rare or new species of fish, crustaceans and corals. A truly "cash factory"they say about these waters that give rise to so many new life forms.

In 2014, the scientists of the Lengguru expedition returned to explore the region. Arte will broadcast a documentary on their adventure in June and July 2016:

→ Papua, in the heart of a lost world

As early as 2008, the Kaimana area established a 6,000 square kilometer protected marine area in Triton Bay waters. To dive, you must pay an entrance fee of 500 000 Rp (about 40 €). As Raja Ampat, you are given in exchange a badge to hang on the stab (the BC).

Triton Bay has lived up to my expectations: on the diving side, exceptional, incredibly rich and unspoilt seabed; on the atmosphere side, a very peaceful, restful holiday, far from the tourist crowds and the fury of the world...

But honestly, I don't think it's a destination for all divers. In Triton Bay, the waters are loaded with nutrients, resulting in a spectacular profusion of underwater biodiversity. The downside is extremely variable visibility, in water that is often greener than blue: from poor (5m) to fair (15m) for indoor sites, from good (20m) to excellent (25m and more) for sites further out to the open sea. And then it changes all the time according to the weather, which is also very variable, even on the same day...

Result, we must every day adapt the choice of sites and the type of dives, depending on the conditions of the sea, the sky, the tide ... And my daily dilemma of photographer, at breakfast time, is to decide which objective to fix on my device Fisheye or macro?

(Yes, it's hard to have such serious decisions on vacation.)

You also need to be aware that apart from diving, swimming and a trip to nearby villages, there is not much to do in the area. So it's better to be in a contemplative mood, preferably a bit of underwater photography and capable of a child's wonder in front of the treasures of nature, to enjoy Triton Bay as it deserves.

For me, I enjoyed: fluffy forests of black coral, explosion of bright colours of soft corals, huge tables of hard coral, jacks on the hunt, giant whirlpools of fusiliers and surgeons, gaterins, carpet sharks (wobbegongs), swarms of glass fish, seahorses-pygmies galore, mini cuttlefish and mini octopus photogenic (wonderpus), harlequin shrimps, nudibranchs ... Not to mention the often seen dolphins of the boat and even (once) whales ...

Also note that do not consider diving to Triton Bay during what corresponds to our summer. At that time, it's the eastern monsoon season (which runs roughly from mid-June to mid-September). The region is then very exposed to the winds and the conditions at sea do not make it possible to dive. The Triton Bay Divers Resort closes elsewhere during the summer months.

My only regret: that there was no bagans Nearby, during my stay. These mobile fishing platforms, which haul nets overflowing with anchovies or other small fish for bait, attract whale sharks, who come to feed around the catches (as in Cenderawasih Bay, another known destination of divers in West Papua).

We can then immerse ourselves alongside these nice giants of the seas (as I did in Mexico) and admire them very closely. I will not have had the opportunity to do it this time ... Too bad.

Away from it all

The small resort Triton Bay Divers where I spent a dozen days is very recent, it opened in February 2015. This is the first and (for now) the only diving structure in the region of Kaimana, where tourism is still almost nonexistent .

Since I discovered Raja Ampat, in 2012, I am particularly interested in diving in West Papua, located in the heart of the mythical Coral Triangle. The distant Triton Bay made me dream and seemed for a long time inaccessible to me. Until 2014, there was only the option of cruises-dives (few and most high-end category for the most part). So when I learned about this resort project, I threw myself on their Facebook page...launched even before the opening. As the months went by, I followed their construction and development work on the land, the purchase of the boats, the arrival of the first customers... keeping in the corner of my mind the project of taking a trip there, one day soon!

Behind this crazy project of opening a diving resort in such an isolated place, there is Lisa, an English girl who grew up in Hong Kong, and Jimmy, a Chinese-Canadian who has lived in Taiwan. Both diving professionals, they dreamed of one day opening their own center and associated themselves.

Addition. I put you below a video shot in 2017 by the videographer and underwater photographer Karsten Heinrichwhere Lisa explains what makes Triton Bay different from Raja Ampat, for example:

The motto of the resort Triton Bay Divers, it is "remote but worth it. Basically: it's super far away from everything, but it's worth it! I'll say. I just came back enchanted.

All the more so as I (still) enjoyed conditions worthy of a princess, under those fearsome coconut trees at the end of the world... Yes, during my stay, I was the only diving customer. So who blissfully took advantage of the boat and the TWO dive guides (Indonesians from North Sulawesi, in the eyes of lynx, who worked in Lembeh, among others) for herself alone, eh, who ???? 😊