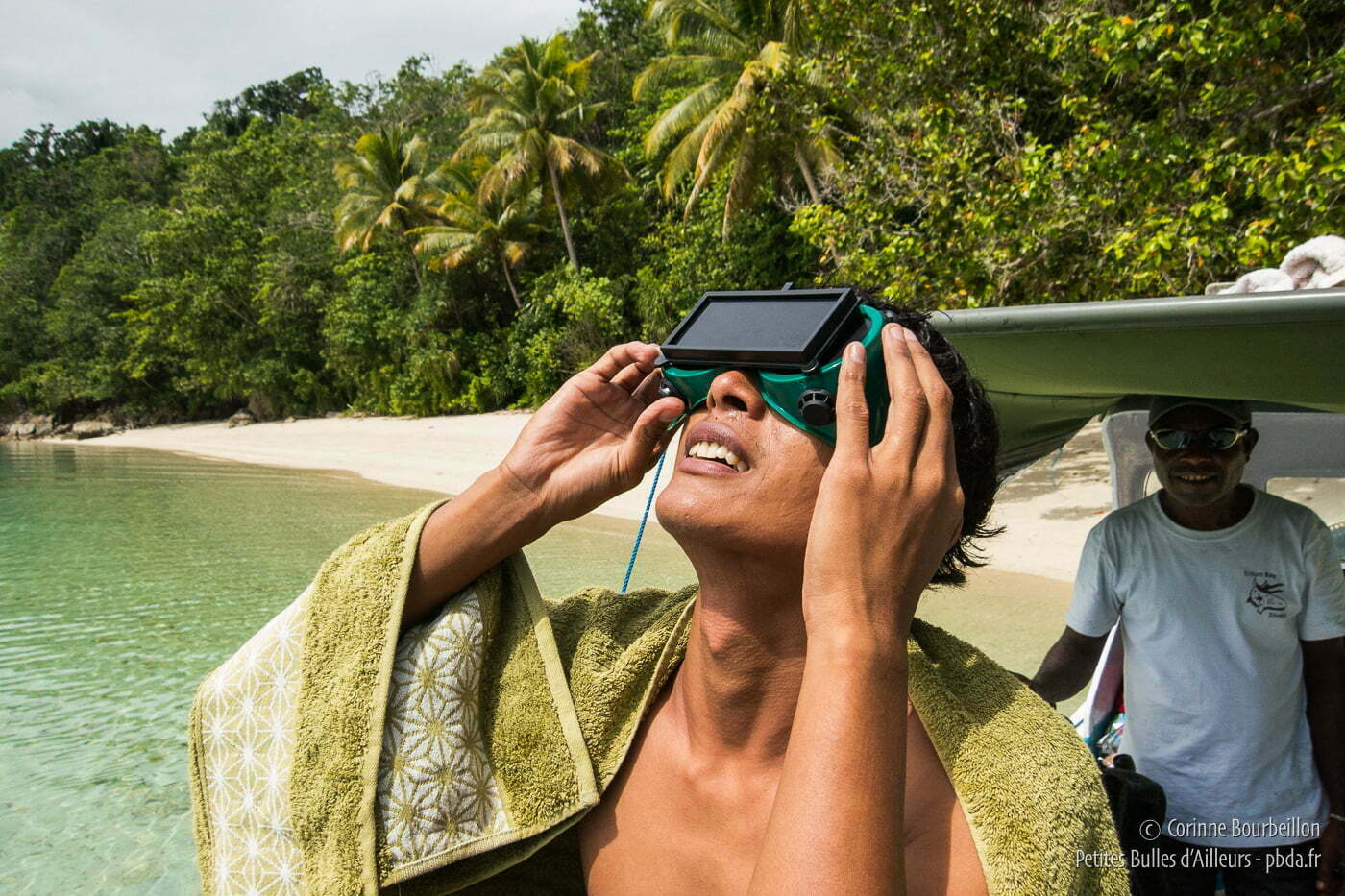 Andi, one of our guides, observes the eclipse. (Triton Bay, Papua, Indonesia, March 2016)

When the sun goes out over Triton Bay...

This is a rare event that I witnessed between two dives, during my trip to Triton Bay in Indonesian Papua. An eclipse, the rendezvous of the Sun with the Moon!

Nasa, Indonesia and me

I knew about it before I left. I knew I was going to be in an area of the planet where... the solar eclipse of March 9, 2016 was going to be observable. A NASA video animation is better than a long speech:

Triton Bay is where I put a small red circle on the map below:

We can see that it is just a hair too "low" compared to the path of the Moon's shadow on the Earth, corresponding to the total eclipse (purple line). So I knew, before leaving, that the eclipse would only reach 90%, where I would be. But that it would still be perceptible and observable, in the middle of the morning, around 10-10:30 am...

Probably, therefore, right after my very first dive of the day, right during the surface interval!

A strange halo around the sun

And indeed, that day, when we come out of the water, Andi and Edi, my two guides, Lisa, owner of the resort Triton Bay Diversand I notice right away that the light isn't quite as usual. And it is only then that I remember that there is an eclipse today! Besides, it was a little bit dark underwater at the end of the dive...

Lisa points her finger to the sky, points out a strange halo, like a kind of crown around the sun.

We return to the boat, take off our gear and dock on a small sand creek for the surface interval. Lisa rummages through her things and takes out two green plastic protective masks, with an opaque plastic visor, also in plastic, like a cheap welder's mask. "This is all I could find here, she tells me. It's better not to stare at the sun too long, it's not really suitable, I think. »

The masks pass from hand to hand. The boatmen...the guides, Lisa and I, we can't believe it. They're not so bad, these masks. Through them, you can see the black disc of the moon nibbling at the white disc of the sun.

We're nibbling on cookies while drinking tea. It is still daylight on our little beach, but we can feel that the sun is not as hot as it should be at this time of the day.

The atmosphere is a bit strange and there's always this halo around the sun. It's only through the black visor that you can really see what's going on.

My SLR camera is in its watertight casing...for underwater photography, with the macro lens... Useless, then. But I do have my little compact camera in my bag for souvenir photos. Quick, I'm trying to get a picture before it's too late. I stick the lens inside the opaque filter. The result isn't great, but I'm glad I managed to immortalize the moment before the eclipse ends.

There's something a bit magical about being there, alone in the world on this beach in Papua, in our wet neoprene suits, watching this cosmic encounter...

This is the first time I am entitled to an eclipse during a surface interval. ????