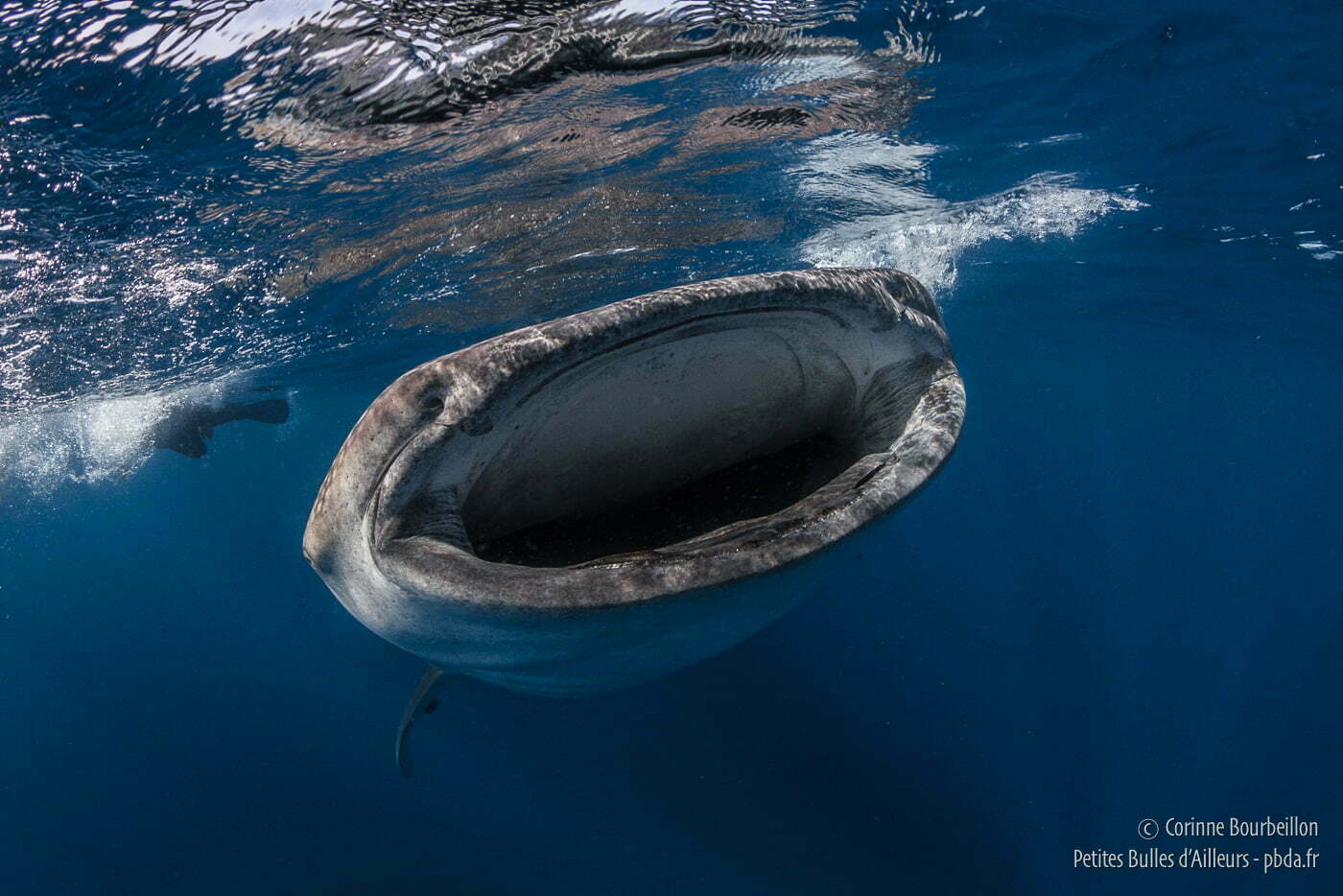 The huge mouths of whale sharks are worth a trip

I crossed an ocean for them. Whale sharks - tiburones ballena in Spanish - gather in July and August off Mexico's Yucatán Peninsula.

That's right, this July, 2014, I'm in Mexico. It's a new destination on the Petites Bulles d'Ailleurs! Usually, I usually hang out in South-East Asia during summer holidays... But I really wanted to see this:

Every year, from mid-June to mid-SeptemberWhale sharks gather by the hundreds off the Yucatán Peninsula near the Yum Balam Nature Reserve in Mexico. They come here to feed on tiny translucent tuna eggs, which are abundant in the area at this time of year. You can swim with them by snorkeling.

The intensity of the experiment is proportional to the size of the animal. It's just huge!!!

Those are the biggest fish in the world. They don't have teeth (only very small teeth of a few millimetres which are not of much use), but they are sharks.

Like whales (which are mammals, not fish), they are gigantic and feed on tiny marine organisms (plankton) and small fish, which they swallow by filtering the water with their mouths wide open.

To learn more about these unusual fish, I refer you to the "whale shark" Wikipedia entry..

My previous encounter with a whale shark was in 2006! It was in Thailandduring a diving cruise in the Similan Islands, near Richelieu Rock (the photo opposite, where I can be seen with my small compact camera of the time, was taken by another diver, Daniel Cocker, whom I thank for the picture!)

I tried to cross their path again off Koh Lanta in 2007then in Sogod Bay in the Philippines in 2008. In vain. More recently, during a diving cruise in the Maldives In February 2014, I once again managed to miss a whale shark... Frustrating.

So, this summer, I decided to fly west: towards Mexico, where the meeting with these giants of the seas is certain to happen in 100% in July!

Update 2018 : Four years after this 2014 trip to Mexico, I had the chance to meet whale sharks again... See my post here :
→ In the Philippines, let the whale shark come to you

What a show! The cattle are there, on the surface, swallowing large plankton swarms, indifferent to the small swimmers tossed around by the swell.

Once they're in the water, there's no point in chasing them. These gentle monsters are much faster than humans on flippers. With the swell and the current, approaching them is already very sporting!

I got confirmation of what I already knew: I'm a much better diver than I am a swimmer. Palmer on the surface being shaken by the waves is not my thing at all. I, who never get sick in the boat, was almost seasick in the water, manoeuvring my big tank to make my photos and videos!

Some practical information to observe whale sharks in Mexico

As I get more and more emails asking about my trips, I'm compiling below little info about my stay in Isla Mujeres and the whale shark tours... 😎

As I explained earlier, whale shark season is roughly stretching out from mid-June to mid-September. The meeting with the giants of the seas is, so to speak guaranteed from mid-July to mid-August. The rainy and hurricane season usually arrives in September-October.

July-August is also the season when it is terribly hot in this region of Mexico (tourists who are not interested in whale sharks come en masse in February-March to enjoy the Riviera Maya when the temperature is more bearable).

I, who am able to make do with a fan in Asia, I bless the air conditioning here... But it's really in the water that we're best!

ISLA MUJERES AS A BASIC CAMP

I chose to stay in Isla MujeresThis way, you can be as close as possible and reduce the travel time to the whale shark area (and thus get there before the hordes of snorkelers coming from Cancún and Playa del Carmen).

I settled in the south of the islandfar from the tourist "village" of the north. Nothing planned in advance. I found at the last moment, on the internet, the day before my arrival, a small hotel that seemed nice and comfortable, just to end my Mexican stay in beauty. Good luck. A peaceful place, with a sea view, very cute. The iguanas come to stroll near the pool and the wifi works of God's fire. I recommend the address, which remains affordable, it's really nice: Hotel La Joya.

Good to know: for accommodation in Mexico, if you pay in cash, you are often given a discount corresponding to the amount of taxes (i.e. 16% + 3% in all the hotels where I stayed).

Again, I hadn't planned or booked anything in advance... Once I arrived in Isla Mujeres, I looked again at the reviews on the internet and decided to go for the Casa del Buceo. It is a small Mexican diving center, family, out of the tourist center (and not too far from my hotel). Super nice welcome, outings in small groups, staff with small care. Ideal for me who is in a hurry a bulky camera with its waterproof housing.

The day I pointed, it was a hot day to die. The very efficient Pablo was opening up a cerveza behind the counter. A nice guy, who immediately understood what the dripping tourist who came to inquire needed: "Here, it's too hot, why don't you have a beer", he said, handing me a Dos Equis (XX). I also did two small bottle dives near the island with them.

(If you live in Playa del Carmen, I also recommend the small French diving center O2 Mexicowhich regularly organizes whale shark tours. I dove with them in cenotes and at sea ...)

Whale sharks, which congregate in the summer off the Yucatán Peninsula near the Yum Balam Nature Reserve, have become a tourist attraction. We come to swim with them from Cancun, Playa del Carmen, Isla Mujeres, Isla Holbox ...

The excursion (which usually includes transportation, lunch and drinks, guide and equipment rental) costs from $100 to $150 (American, of course), sometimes more, depending on the starting point, the operators, the services.

HOW TO AVOID THE CROWD

At the end of the morning, there is an impressive number of boats in the area where the whale sharks are! To avoid the crowd, it is better to use a diving center or a tour operator who leaves early (same tactic as to visit the Mayan pyramids). It's really worth getting up at dawn!

Recently, the approach of whale sharks has been regulated (fortunately for them): no scuba diving, no more than two swimmers together with an authorized guidemandatory wearing of a floating garment (diving suit or lifejacket), ban on touching animals…

Once located, the huge fish are clearly visible from the surface, by boat, and the success of the excursion depends on the captain and guide's ability to lead you to the right place, to admire these giants from their best angle, preferably avoiding other groups of snorkelers.

Another thing to know: the crossing to reach the whale shark area can be long (from one to three hours, depending on the starting point, the power of the engines, the age of the captain and the weather). It can also be very bumpy if there are waves (watch out for seasickness, both on the boat and in the water). Whale sharks are not always in the same place and not necessarily very close to the coast. At one time, there was a gathering of whale sharks just off Holbox Island. But this is no longer the case.

For the outing I did, we went quite far offshore, far beyond Isla Contoy, north of Cancún. I've cobbled together a Google Map below, with a blue fish that I've placed where I think we went.

I've been in Mexico for three weeks! My stay ends this Sunday, July 20th... And except today, I haven't blogged at all during the trip! Too many busy days and lousy internet connections. And then, I think I needed to disconnect a bit...

All the same, I managed to post a few pictures (mostly underwater) along the way, on the Facebook page of Les Petites Bulles d'Ailleurs. You can see them at the end of this link :
→ Album "Mexico - July 2014" on Facebook

Here are, in order, the stages of this trip in Mexico - or more exactly in a very small part of Mexico, along the very touristic Mayan Riviera - that I will detail in future articles:

Finally, I still have two more trips and lots of dives to tell about: the Maldives (February 2014) and my short getaway in Indonesia (May 2014). I've interrupted the stories in class and I've got a lot of pictures in the hard drive .

Anyway, I'm way behind in updating Bubbles Underwater & Beyond. So don't be surprised to see Indonesian and Maldivian posts coming in between two Mexican articles in the coming weeks!

To see all the articles on this trip, click on the link below ...