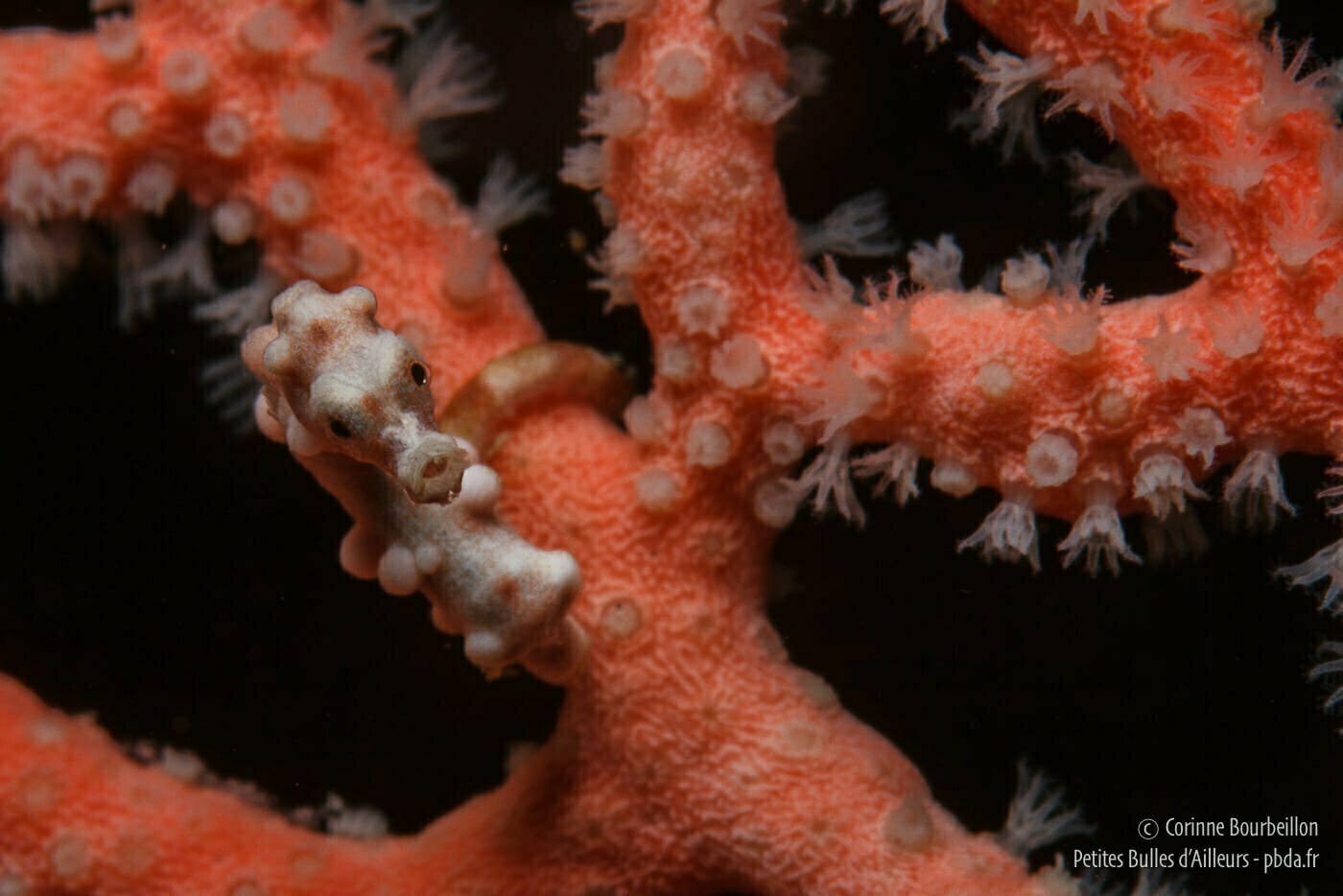 Shy as a pygmy seahorse

Those tiny sea horses are a-do-ra-bles!!! But they're very shy, and they hate having their picture taken...

Photographing them is really a challenge, because of their tiny size. Just think: the seahorses in the picture above are about the size of my little finger nail!

So, to observe, some divers get a magnifying glass. And underwater photographers like me shoot them with a lens macro, which captures tiny subjects down to the smallest detail.

Locating them during a dive is therefore really not easy. They are most often found in huge fan-shaped coral "bushes", the gorgonians. To find them, it's a bit like looking for a needle in a haystack ...

So every time I choose to put the macro lens on my Canon Eos 7D, my two Indonesian guides Andi and Edi, from the resort Triton Bay Divers, carefully inspect the gorgonians and corals around. 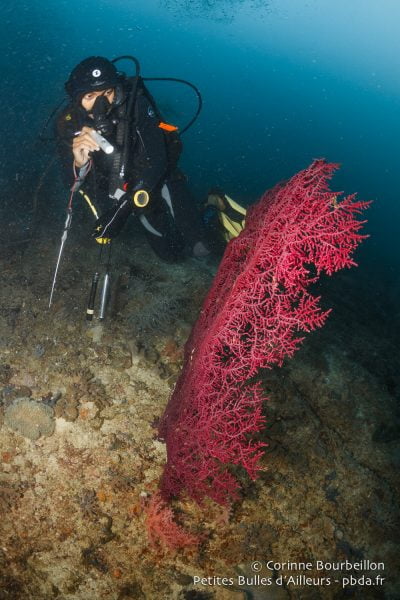 It's a bit like a competition between them, whoever finds the first one the adorable pygmy seahorses first!

But it's a game of patience, a delicate quest, not always successful. I am always very impressed when one of my precious guides manages to find these mini-sea horses, kings of camouflage, among the branches of a huge gorgon ...

So there is both variety and profusion on the same area. It's rare. Really, this Indonesian bay, located in West Papua, south of Raja Ampats biodiversity hotspot status. I talked about it in this first post:

→ Diving under the coconut palms of Triton Bay

The bumps of the bargibanti serve as camouflage and allow it to merge with the branches of the gorgonians of the same colour, which are also bumpy when their polyps are closed. In its pink-mauve version, it is the most widespread pygmy seahorse, the one that I photographed most often during my dives in the Indo-Pacific zone. I also discovered at Triton Bay a variant with red humps and white body: this type of seahorse, particularly rare, is nicknamed "Santa Claus" by my guides, who are overexcited if they find one!

He is similarly very talented to pass unnoticed or almost in the branches of gorgonians he lives. Less common than the bargibanti, it is highly coveted by underwater photographers.

Finally, there is the elusive and delicate pontohi (Hippocampus pontohi, also named Pontoh's Pygmy Seahorse). A rarity as difficult to spot as to photograph.

His white body decorated with red and yellow patterns allows him once again to play hide and seek among the "twigs" of coral and algae leaves where he likes to take shelter, on walls or underwater drop offs... And I even once saw his cousin the servensiless flamboyant, with a brownish color.

These graceful little sea horses don't like - but then not at all - pictures. They are shy, big shy people who hate being in the spotlight. With their tails curled up on their branches, as soon as they notice that they are being taken in too close, they prefer to turn slowly... and turn their back stubbornly to the lens! This is sometimes exasperating.

So it takes time, sometimes a lot of time, to manage to photograph one from the front or the side. The most annoying thing is when he decides to change branches. It then takes a long time to find it! The help of a lynx-eyed guide is indispensable... 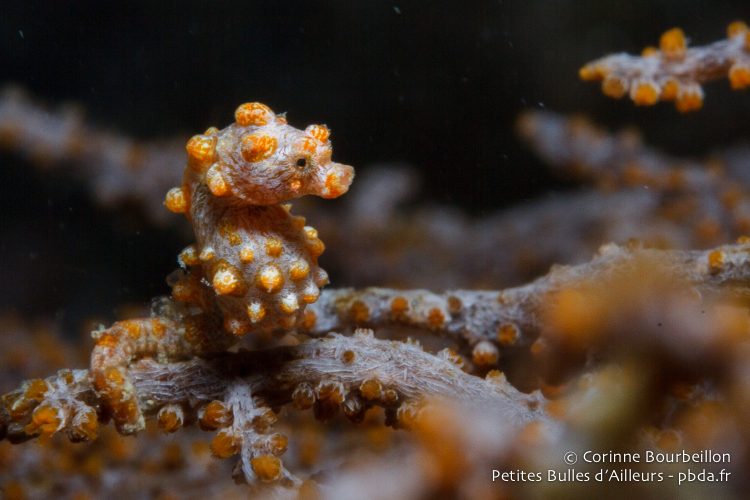 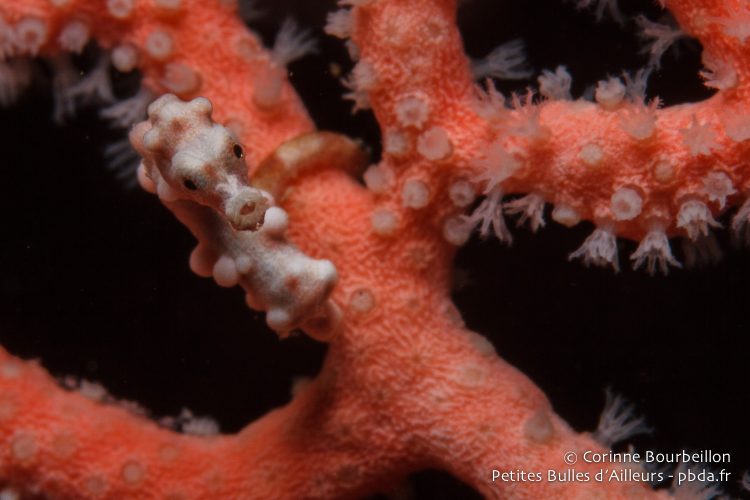 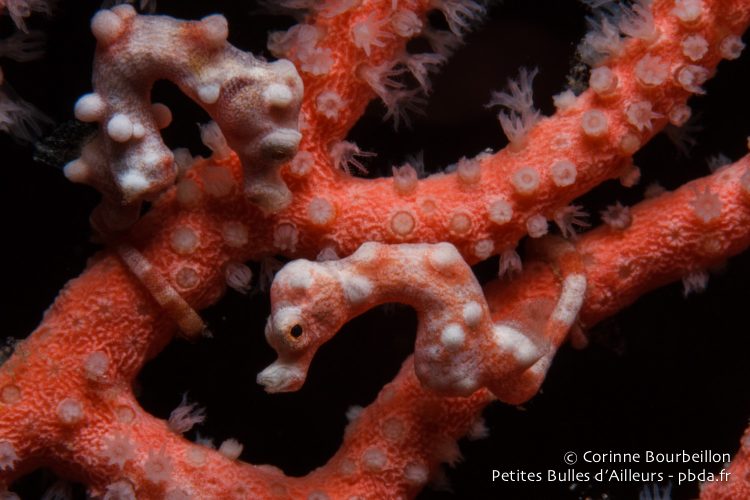 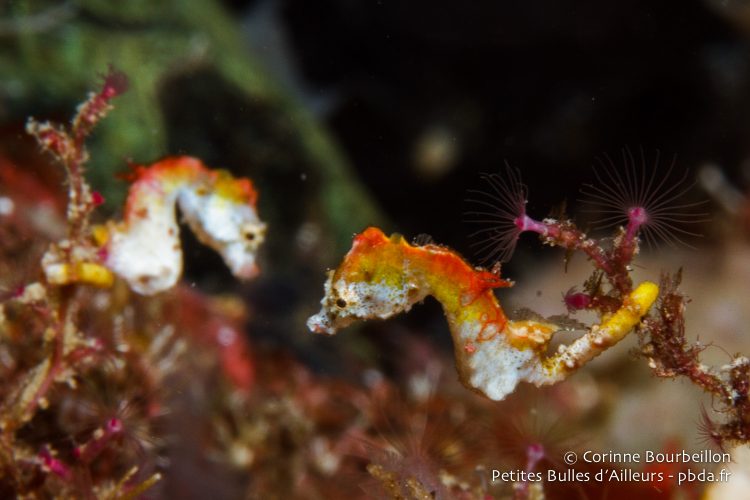 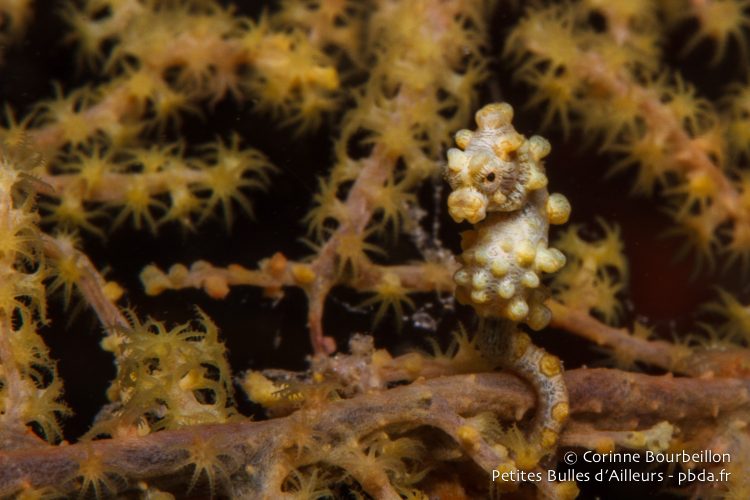 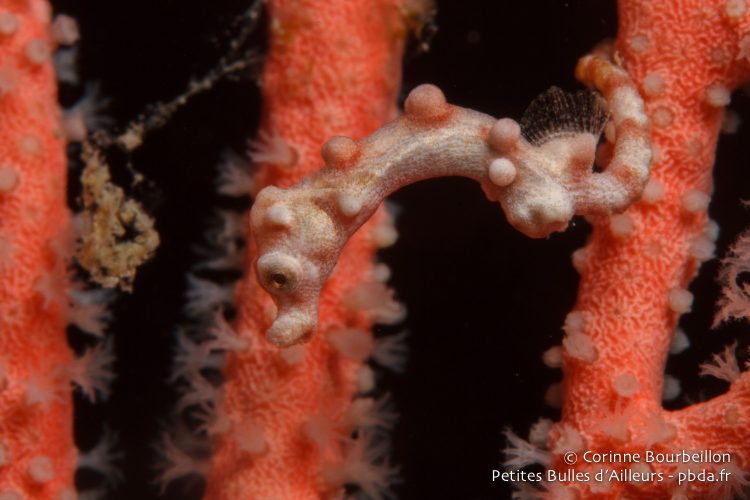 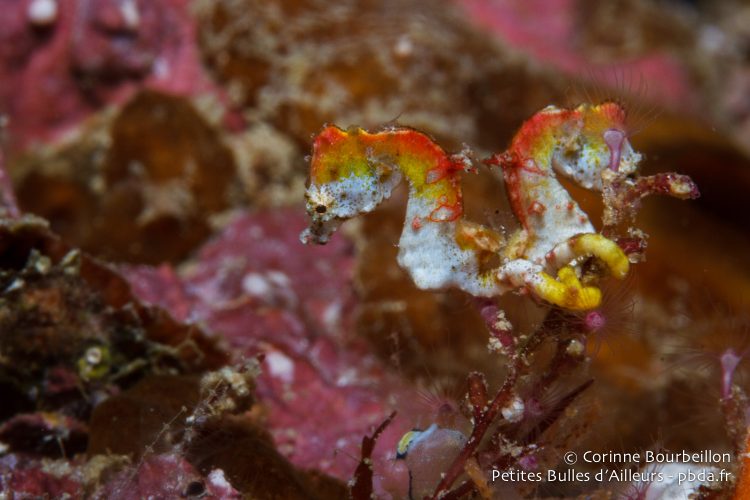 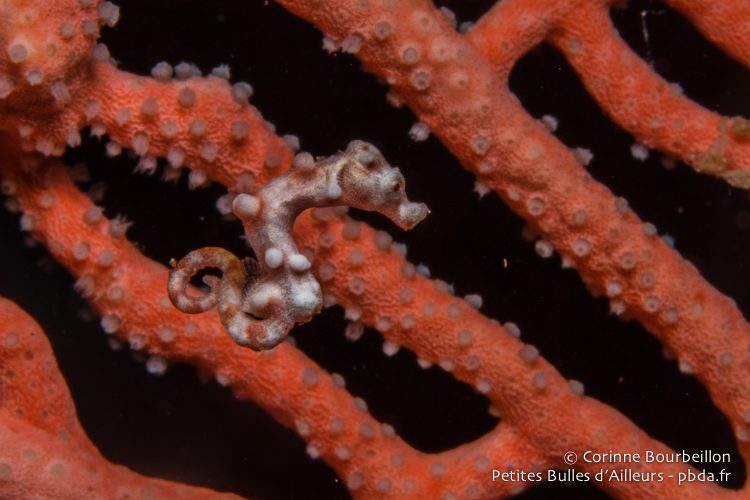