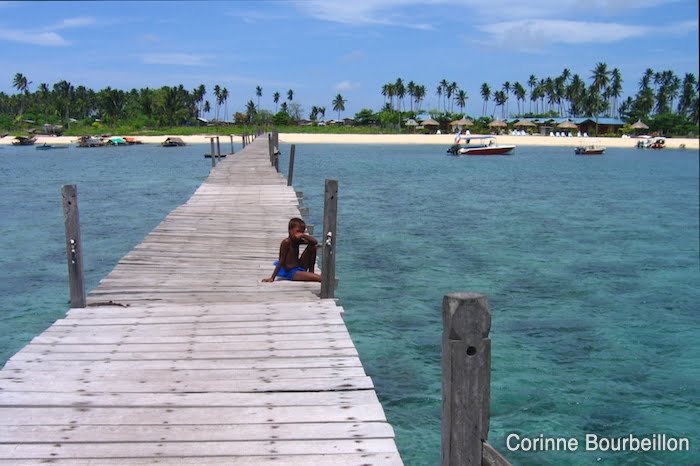 In just over a month I fly to Kuala Lumpur (Malaysia). With my mania not to do too much preparationI still don't know what my itinerary will be. Only thing I know for sure is that I'm going back to Borneo, for diving in Sipadan, as in 2006.

For those who are not familiar with the geography of the area, look at the small map below, to locate. I put in big black spots where I want to spend. 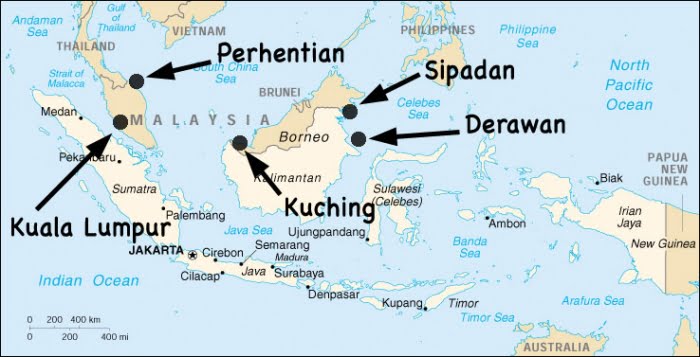 You see the thing? Malaysia is made up of two very different regions: the peninsular area, which is an extension of Thailand, and northern Borneo. South Borneo is part of Indonesia.

Fortunately, from Kuala Lumpur (KL for the close friends), the many Air Asia routes allow to go everywhere in Malaysia and Indonesia, for cheap.

My other envy, dive question, after Sipadan is Derawan.

That said, Derawan is worth the detour, both for underwater wildlife (turtles and mantas, among others) for the scenery. Read Yann Senant's mesmerizing travelogue and take a look at the fabulous images of Pierre Poilloux.

I get a month's freedom. July then. With these new Asian getaway plans, I'm faced with terrible dilemmas. 😀

➡ First dilemma: to dedicate this trip to Borneo exclusively?
Or give in to the temptations of Peninsular Malaysia ... and go back to Perhentian IslandsFor example, to mix pleasantly lazy and quiet dives? So, I would go to Besar (the big one) that I hadn't had the opportunity to discover, instead of Kecil...

➡ Another dilemma: to go to Kuching or not?
I'm aiming for Sipadan, of course, but it might be a shame not to take advantage of this new incursion into Borneo to visit Kuching, the capital of Sarawak (Malaysian state in the northwest of Borneo), whose charm is praised by all travellers. But it is completely the opposite of Sipadan. And there are not too many dive sites in the area. It's rather a good base to radiate in the surrounding natural parks.

➡ Third dilemma: jungle or no jungle?
I am rather aquatic, like traveler. I like the sea, the beaches and the islands. In short, the very moist treks in the tropics, I do not like the masses. Especially if it is recommended to put on anti-leech socks (brrr, special dedication to Thib'). At the same time, if there is a place where the jungle and the natural parks are sumptuous, it is Borneo... Good. On this one, I'm going to be blasé, but too bad: I've already done a lot of jungle walks during my previous trips, in Thailand and Vietnam for example. And then, during my trip to Borneo in 2006, before heading to Sipadan, I took the time to stop in the Sepilok Center to admire the orangutans: a piece of jungle with comfortable wooden footbridges (perfect for the poor hiker that I am). So, now, uh... I think I'll dispense with the jungle and tribes trip, even if it's in principle a "must" of the trip to Borneo.

So many dilemmas that I have not decided yet ... (Yes, I know, I'm sorry to have such problems.)

And yet it is not for lack of having received several e-mails from readers of Bubbles Underwater & Beyond, giving me advice and possible itineraries. Thanks, among others, to Ludovic and Olivier, for their suggestions!