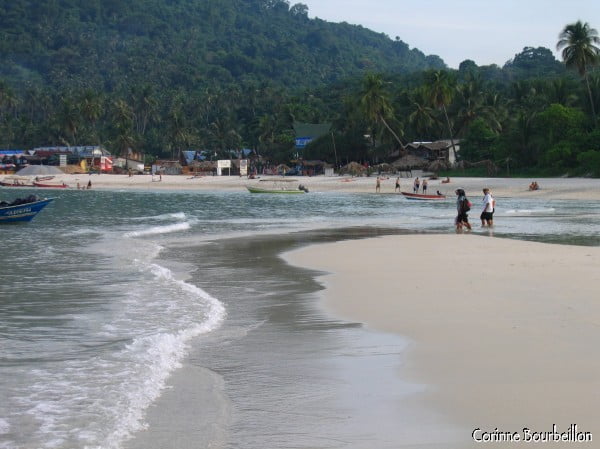 I leave Kota Bahruand its women buried and concrete for the Perhentian Islands. Perhentian Besar the great, and Perhentian Kecil the small, renowned for their crystal-clear waters and coral reefs .

I share the taxi to Kuala Besut, from where the boats for the islands leave, with two young English girls. Afterwards, everything is very easy. The driver drops us off in front of the small agency he works for, which collects the tickets for the crossing.

(Small addition, years after the publication of this post: I don't know yet, during this July 2006 trip to Malaysia, that this first passage in Sipadan will be followed by two others, because I won't resist the pleasure to go back diving on this really exceptional spot, in 2009 and in 2013.)

But right now, I'm in the early stages, in the Perhentian Islands, so...

We are a dozen young people backpackers (backpackers) to cram us into a large boat, equipped with two powerful engines: 45 minutes of jumping in the waves and we are there!

We all go down to Perhentian Kecil, the Little Perhentian (pronounced "ké-tchil"). This is typically the island of young budget travellers with backpacks... The accommodation is more rustic and a little cheaper than on the neighbouring island of Perhentian Besar (the Big one), and there are a lot of bars along the beach.

My first impression of the islands is in any case consistent with the information gleaned here and there on the internet : transparent water, white sand, coconut trees, deep green forest behind. Really a very nice scenery, very postcard. The sun is banging, it's terribly hot.

Just deposited on the beach, I head for the big red sign of Coral Sky Divers...clearly visible. This is the diving club I contacted by e-mail before leaving.

WARNING: This trip dates back to 2006, and Coral Sky Divers has not existed for several years. But there are a lot of other dive centers on the Perhentian Islands, it's quite easy to find it via a small Google search.

Perhentian Kecil being crowded in July-August, it's a bit hard to find accommodation without having booked anything, especially when you arrive for the weekend, like me.

So the club took it upon themselves to get me a bungalow from their neighbors. Here in Malaysia, the tourism industry uses the term "bungalow" instead. chalets (sic!) for the bungalows.

I am therefore housed in Matahari Chalets, which adjoin the diving club (mata-hari means "sun" in Malay, literally "the eye of the day"). Very practical.

I'm not going to have a long way to go in the morning, jumping out of bed, to gear up before the first dive of the day. So my only concern may be the difficult choice of which swimsuit to put on. The start of the holiday is looking pretty good...