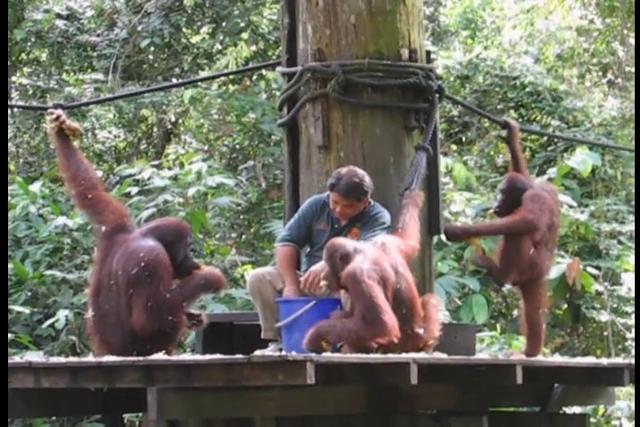 The orangutans of Sepilok

Here I am in Sandakan, northeast Borneo (Malaysia), to see orangutans "for real" in the Sepilok Center. These great red-haired monkeys, victims of poaching and deforestation, are gradually being reintroduced to the wild, in a nature reserve in the middle of the jungle.

A jungle "equipped" for tourists

18 July 2006. I arrived in the morning, my bags are set. In the early afternoon, about an hour before the orangutan meal announced at 3:00 p.m., I head to the Sepilok Orangutan Rehabilitation Centre of Sandakan...located right next to my hotel.

It is both a protected nature reserve and a veterinary centre, whose primary mission is to rehabilitate wildlife and reintroduce orphaned or injured orangutans into the jungle, who have been rescued and cared for. Often youngsters who have been abandoned or separated from their parents, victims of poaching and deforestation.

The Sepilok Centre also works to raise awareness of the plight of orangutans. It is an animal that has become a symbol of the deforestation at work in Malaysia (and neighbouring Indonesia), particularly in Borneo. Entire swathes of jungle are being replaced by huge oil palm plantations.

Orang utan literally means "man of the forest" in Malaysian. To learn more about this great ape and the threats facing the species, which is considered Critically Endangered, please visit the following website by IUCN (International Union for Conservation of Nature), I refer you to the page Orangutan of the WWF website.

Before that day, I had never seen orangutans "in real life" before. I only knew them from documentaries.

When I arrived at the Sepilok Centre, there are a few tourists, but the place is not crowded. I buy my ticket, watch a short eco-educational film shown in an air-conditioned room, before taking a long wooden footbridge that leads through the jungle to the platform where the monkeys are fed.

I'm rather pleasantly surprised. Whatever one might think of this center (I was initially afraid of a vulgar tourist attraction), this is not a zoo or a circus.

Part of the jungle has been "landscaped" to allow visitors of all ages to observe the monkeys from a large wooden platform. So you don't have to wade through wet leaves full of greedy leeches, phew!

Still, it's very humid under the canopy of the huge trees, I'm dripping. You tilt your head back to see the top. It is vertiginous.

Some orangutans are already installed on their own platform, hanging from a large tree, which is connected to other trunks by large ropes.

The healers arrive shortly after, with buckets of bananas. They sit quietly, without a sudden gesture, in the middle of the monkeys, and begin the distribution, without ostentation.

The Sepilok orangutan meal: the video

The atmosphere is peaceful, quiet, in the forest. The people around me are commenting half-voiced on the terribly human attitudes of the orangutans, and the arrival of new monkeys swinging softly, with their huge arms, along the ropes. The spectacle is fascinating.

I'm coming home from this little "junglesque" getaway with a smile on my face. Tomorrow, I'm heading for Semporna for the ultimate goal of this diving trip in Malaysia: the mythical island of Sipadan !

Updated 2018. The orangutan has truly become the emblematic animal of wildlife that has fallen victim to deforestation. Illustration with the video below, where we see an orangutan from Borneo in front of a bulldozer. Distributed by the organization International Animal RescueIt went viral on Twitter in early June 2018 (but the video is actually from 2013).