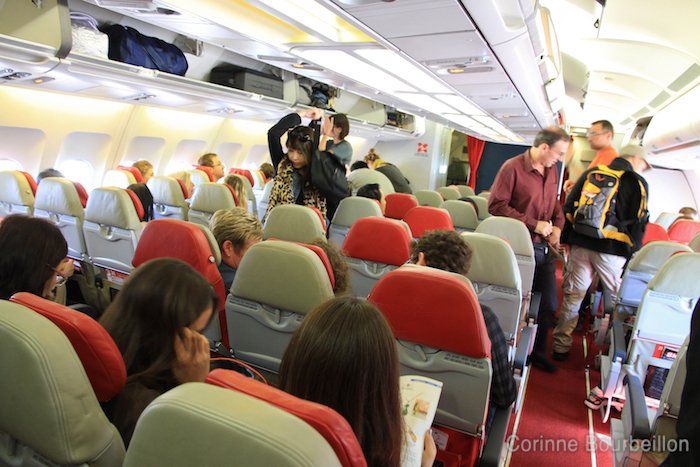 Since the time I speak (Air Asia here, Air Asia by then), this time it's done! I finally tested the brand new Air Asia X line, from Paris to Kuala Lumpur. The route was launched by the Malaysian lowcost airline in February 2011.

January 13, 2012. Small update : Too bad, Air Asia flights to and from Europe will stop from the end of March 2012 ...
Read: Air Asia X abandons flights from Paris and London

As I already wrote in other posts, Air Asia is probably the company that I have most often stolen, because it allows to circulate everywhere in Southeast Asia, for cheap. The lowcost is good ...

But flying 12 hours on this brand new long-haul route from Paris, stamped "X", is a different matter. So I boarded the plane this Sunday, July 3rd, wondering a few questions... 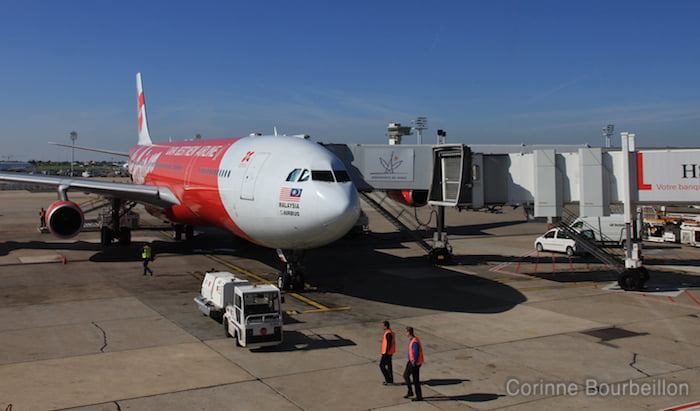 I was afraid of being a little cramped and finally, I'm fine. I did not measure the spacing between the seats, but they seemed comparable to any other airplane seats. 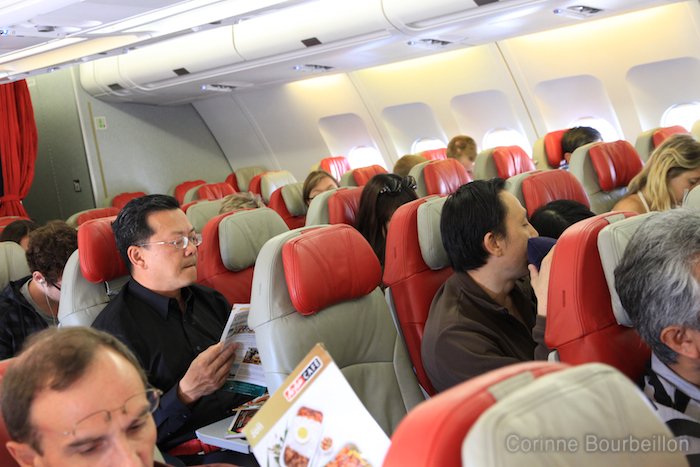 The plane looked new or almost. A red and white Airbus, with the colors of the company.

Two pigeons perched on the cockpit while I waited in the departure lounge. It seemed like a good omen for the trip ... 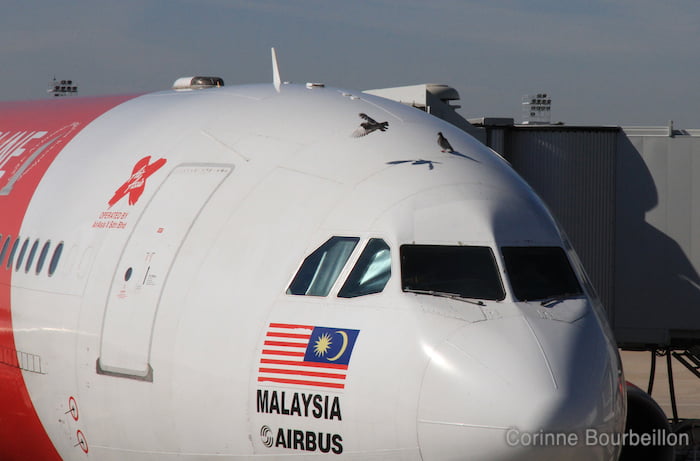 For extra services, you have to pay: this is the principle of lowcost companies. So I had bought my meals in advance, as well as my comfort kit and excess luggage.

The "comfort kit" consists of a red cover containing a blanket, an airbag and an eye mask. You can keep everything afterwards, but I didn't bother with that... 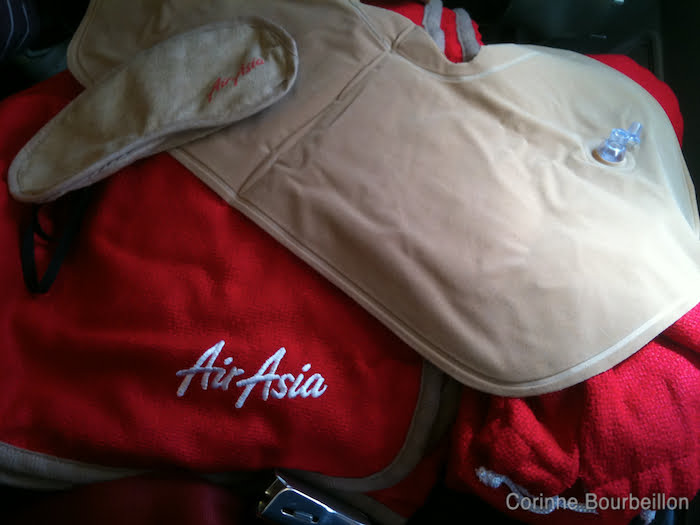 Can't load me up any more. As for the extra kilos, with my diving equipment and all my underwater photo equipment, I now put in the hold... 27kg!

Meal-wise, the portions aren't huge, but it was enough for me. I think I was right to opt for the Asian menu, with a little spicy rice, as I like it. The "Western" trays from my neighbours seemed much less appetizing. 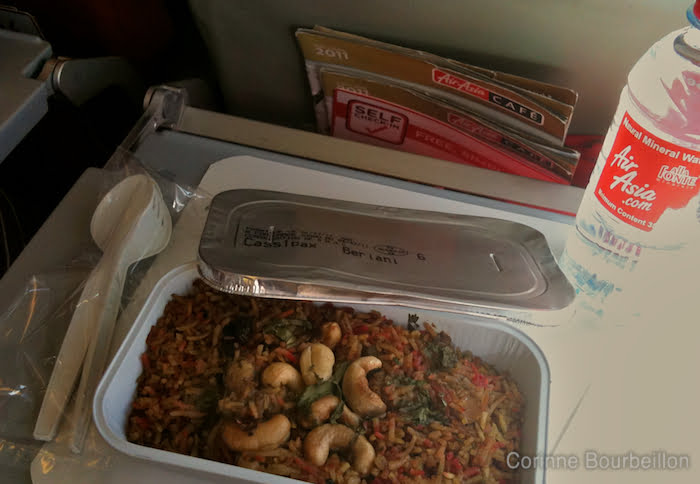 The prepaid meal is divided into two services: a tray with a small bottle of water is served shortly after take-off and another one three hours before landing. If you want extra stuff, you have to buy it when the hostesses pass by with their trolley.

I refrained from renting a small screen to watch movies, really not essential, saw the turnips on the program, even to kill time.

The thing I missed, in fact, were the famous flight parameters that most regular airlines broadcast on their long-haul screens: altitude, elapsed time, country overflown, local time at destination, etc.

Price more than correct, in my humble opinion, to reach Asia ... I managed to get this ticket at a low price in November, during the great launch promo.

Since then, I've looked at the rates on the Air Asia website. And frankly, excluding promo, they are not much more interesting than that may offer some regular companies, very competitive destinations like Bangkok, Kuala Lumpur, Singapore ... 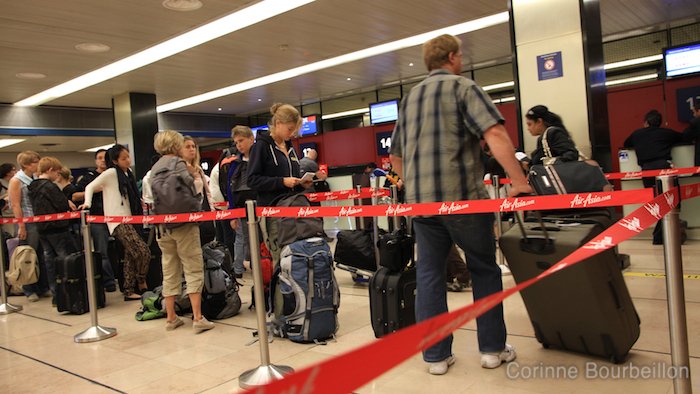 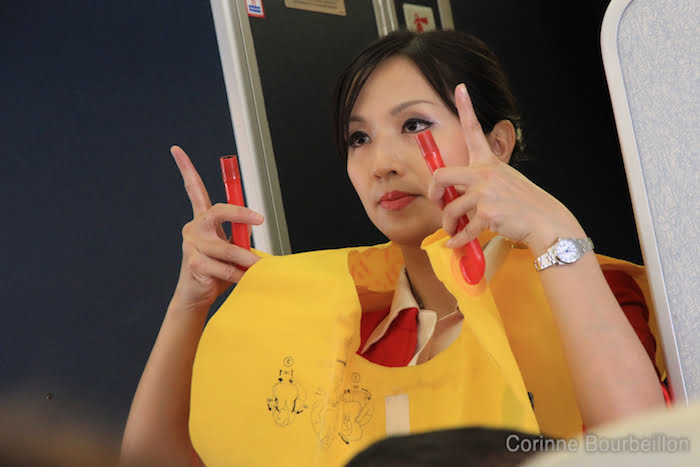 All the same, Air Asia X offers a Premium class which is worth it: there, you have a real bed to spend the 12 hours of flight time comfortably, almost all services, and the fare remains accessible, compared to the seats in First or Business Class of regular airlines.

At check-in, I jealousy of a group of young people who went to ask their backpacks at the counter of the Premium ... Small guys who had to get their seat at the famous promo of November, I Assumed.

Well, it's not all that ... Take the plane, it's still not the most thrilling, in a trip.

I only went to the airport LCCT from Kuala Lumpur. To embark immediately, on another flight, Air Asia Indonesia, this time. Cape on Denpasar (Bali). Short trip of less than 3 hours.

Bali, I only stayed one night. In a very charming hotel that I recommend, the Bali Hotel Pearl. A French-run resort with a small pool and a pretty quiet garden, ideally located on the edge of Legian and Kuta, just steps from the beach.

We are obviously not in tariffs backpackersbut the place remains affordable. Ideal to recover from the shift and the fatigue of the journey when arriving ... 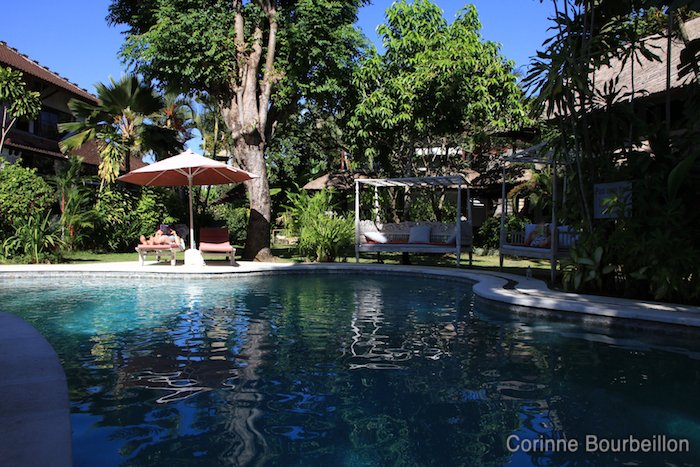 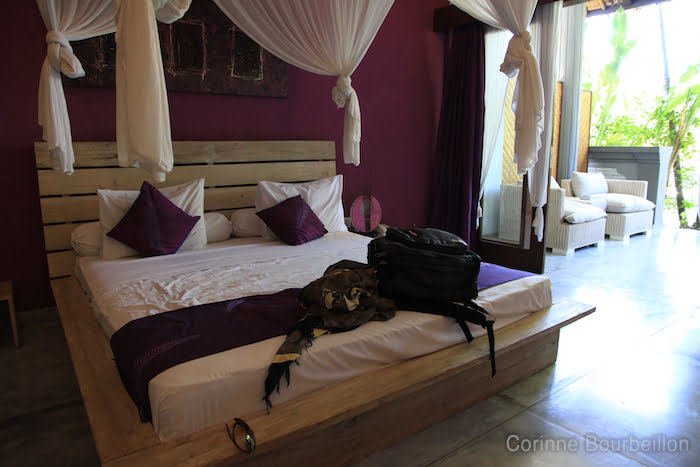 I took another plane the next morning. Batavia Airthis time. A domestic Indonesian company, no longer on the famous "black list" of companies considered dubious... Nevertheless, the plane was very old and the pilot too daring for my taste. Anyway, I arrived at my destination.

AT Flores. Still in Indonesia. A long island, east of Bali, after Lombok and Sumbawa, for those who know it. Flores is part of what is called "the little islands of the Sound".

I'm here. Sprawled on the terrace of my little bungalow, facing the sea. 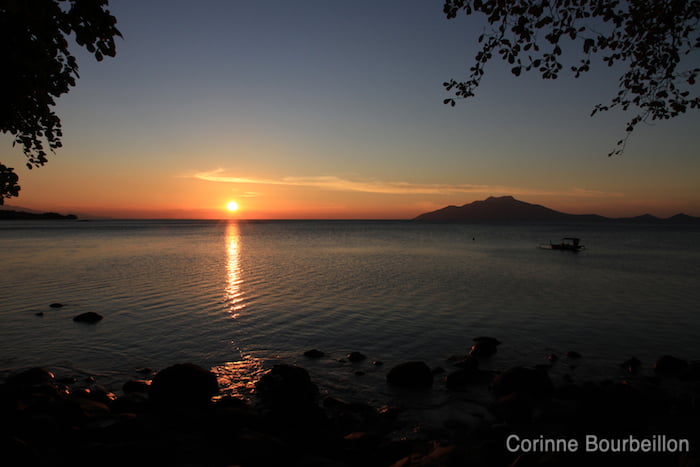 I am enjoying my first "lazing around and diving" stage, not far from the town of Maumere. I'll say more in a future post, if I manage to reconnect...

Here, wifi is capricious and power cuts are frequent!