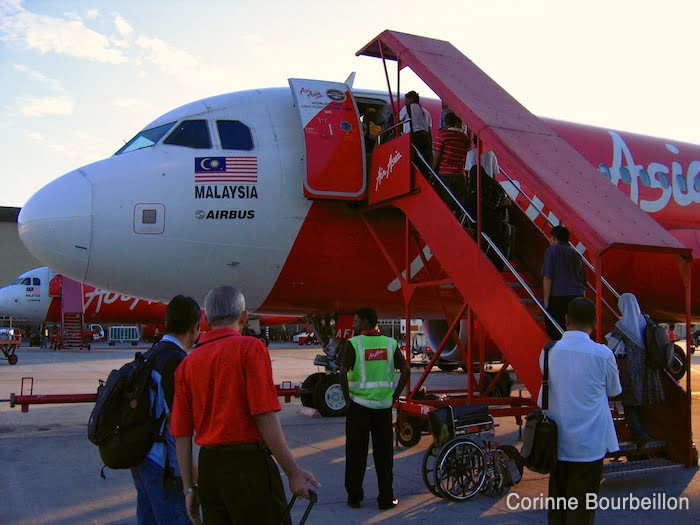 An Airbus from the Malaysian low-cost airline AirAsia, at LCCT airport in Kuala Lumpur.

It's probably the company I've taken most often, with all my travels in Southeast Asia! In this month of October 2009, AirAsia, the Malaysian lowcost, has just filed an application for authorization to practice in France.

Soon a return trip Paris-Kuala Lumpur for less than 400€, as it is the case for London since March 2009?

AirAsia would then operate from Orly airport. The announcement was made by Malaysian Prime Minister Najib Razak on Wednesday evening in Paris at the end of his four-day visit to France.

The DGAC (General Directorate of Civil Aviation) should quickly validate this request. We do not know yet when the line will open, nor how many flights per week will be proposed ...

Kuala Lumpur's practice is that this is a huge air hub serving many destinations in Asia-Pacific. I have often traveled too Malaysia Airlines, according to their promos, for this reason. Once in KL, it is easy and inexpensive to reach Bangkok or Phuket, Bali, Makassar or Jakarta, Vientiane, Hanoi, Siem Reap or Phnom Penh ... and even Australia, India and of course China.

AirAsia's competition may also further drive down the prices of other airlines for Asian destinations. Malaysian lowcost has a very good reputation in terms of safety (the planes are new), unlike so many others in this part of the world.

I do not have any stock at home, but their very small prices and their reservation system on the internet allowed me to organize steps that I could never have offered otherwise.

AirAsia from Paris ? A godsend, really, for budget travellers in love with Asia.

EDIT. July 2011: I finally flew on AirAsia X, from Paris, shortly after the opening of the line !! To read here :
→ Paris - Kuala Lumpur on AirAsia X

EDIT. January 2012 : Less than a year after the opening of the Paris-KL route, AirAsia decides to close its routes to Europe... Read :
→ AirAsia abandons flights from Paris and London