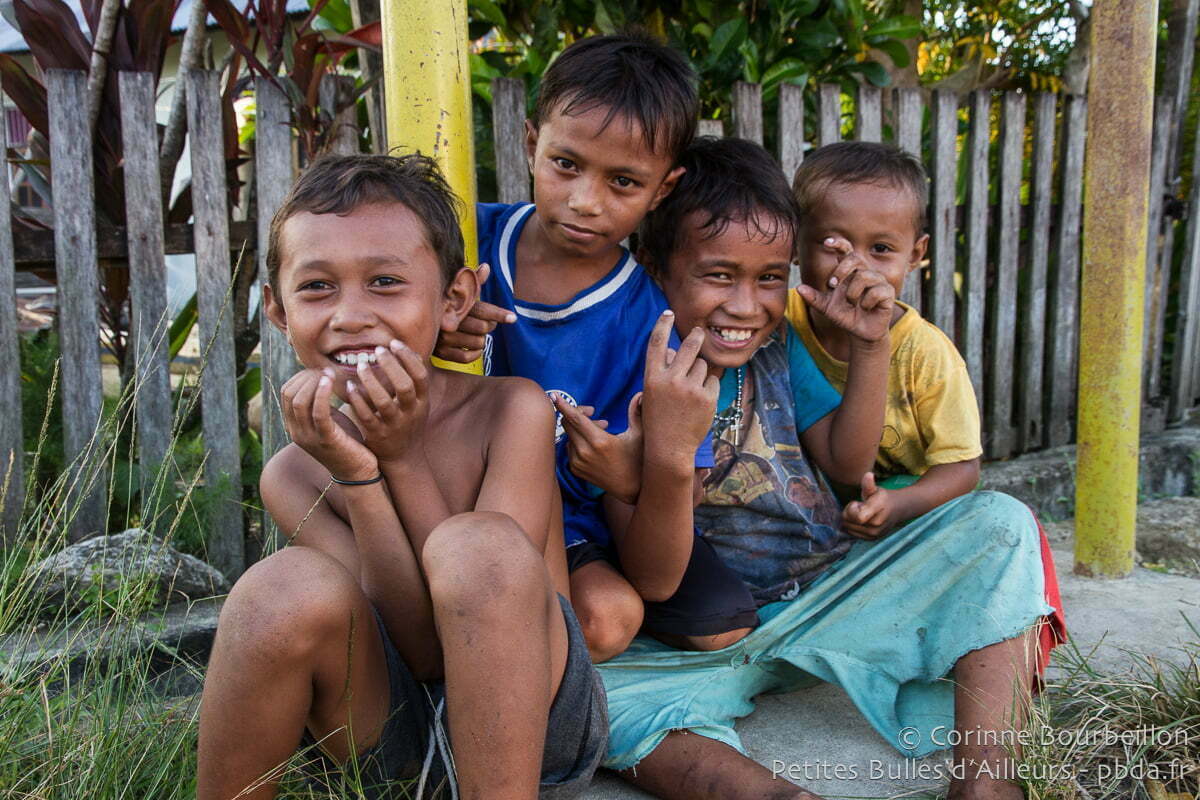 It is a tiny Indonesian village, between sea and mangrove, in Weda Bay. My visit is the evening attraction for the hilarious kids.

March 2013. Weda Resort, Halmahera, North Maluku, Indonesia. There is a handful of bungalows, for tourists divers or birdwatchers, far from everything, between the sea and the jungle.

The perfect place to disconnect.

I gave up on the jungle birdwatching tours - not too much of my stuff, I prefer water and fish. 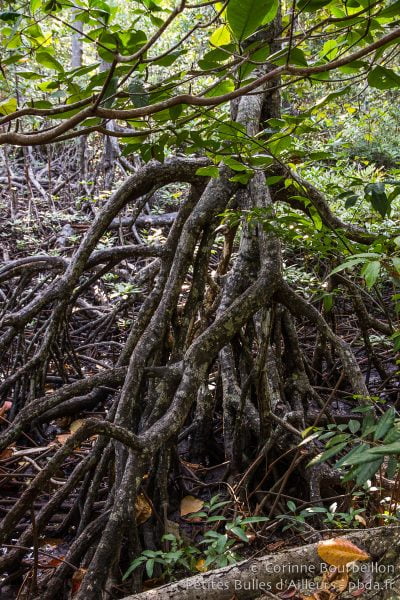 But I improvise a little stroll, at the end of the day, to the neighboring village. His name: Sawai Itepo.

The path leads to a black sand beach. At the end, the village.

It takes only a few minutes to cross this piece of mangroves, taken every day by the inhabitants of Sawai Itepo. Some of them work at the resort.

The cove is really beautiful.

Admittedly, there is the inevitable pile of garbage and plastic waste where pigs and dogs forage, on the edge of the beach, and also some not so beautiful huts, built on marshy ground ... But the soft light The golden end of the day gives a peaceful atmosphere, really serene, to the place.

There are traditional boats and fishing nets on the beach, small fields and wooden shacks behind the coconut trees. 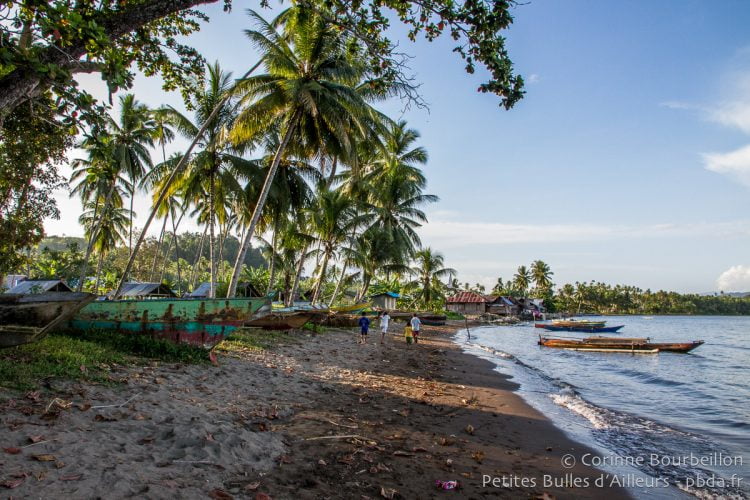 A bunch of kids saw me from far away. They run and shout, without daring to approach me at first.

Adults, they greet me politely and laugh a lot to hear me ask permission to take pictures: "Boleh photo? " 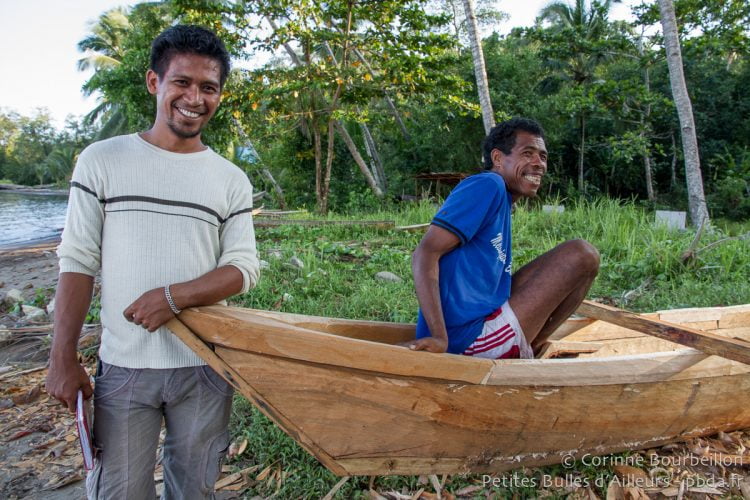 Weda Resort helps the local population with, inter alia, an education program through the Sawai Ecotourism Foundation. It gives me a good excuse to engage in a semblance of conversation and visit the village.

I ask to see both schools, in my lean bahasa indonesia. "Di mana sekola? " The children, more and more numerous, show me the way and escort me along the alleys in the ground.

Schools are hard buildings, like the church. Here, the population is Christian. 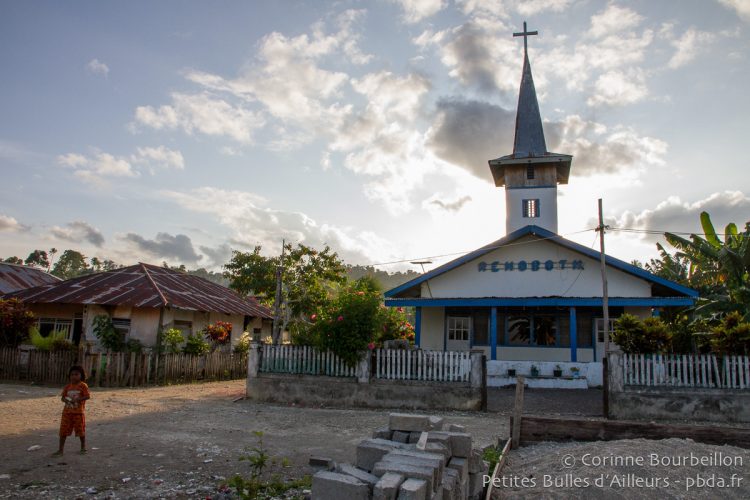 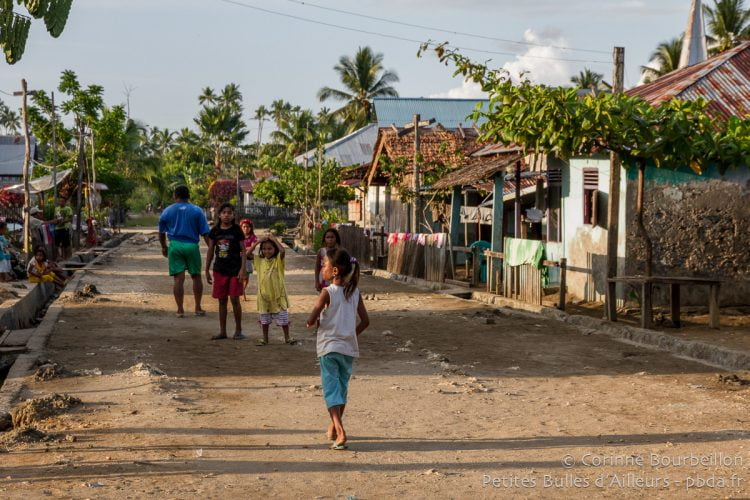 People enjoy the sweetness of the evening, sitting in front of their doorstep. They chat with friends and watch me with an amused eye. "Sore! Sore! " Good evening !

Dry linen in front of the houses, some in hard, most in wood. Some, painted in bright colors, are brighter than others and seem relatively comfortable. Through the open windows, we sometimes see a sofa in the main room that serves as a living room ...

But other shacks are downright miserable, with their crooked walls, assemblages of old planks and bits of rusty sheet metal.

Here, there is electricity - and TV, thanks to satellite dishes - but not yet running water. 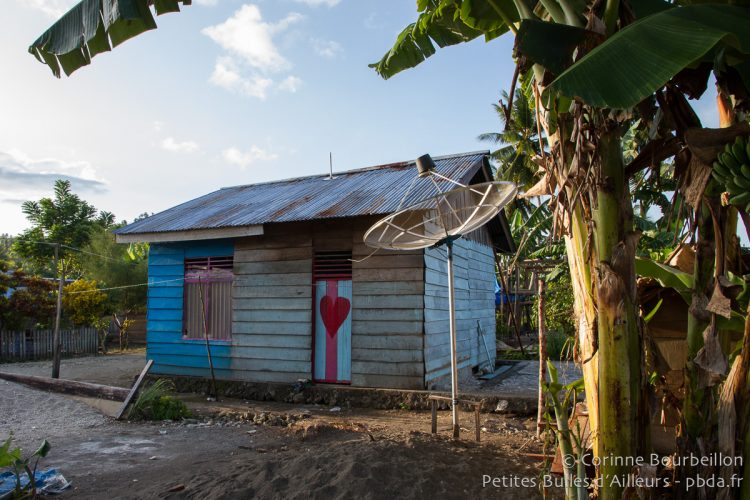 I manage to ask their names for the boldest kids. "Siapa nama? " What's your name ? One by one, they introduce themselves.

And as always, they are the ones who end up asking for photos, delighted to then be reflected on the digital screen. 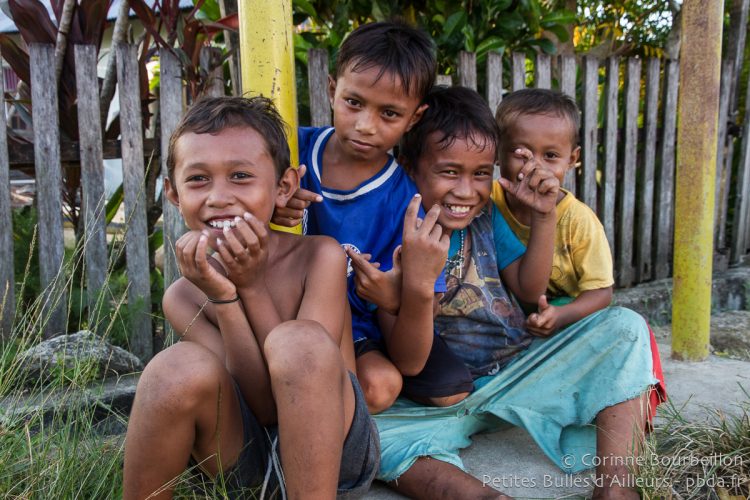 When I go back home, three girls who dared not talk to me at first, hock me.

They too want their picture! It's gone for ultimate smiles. 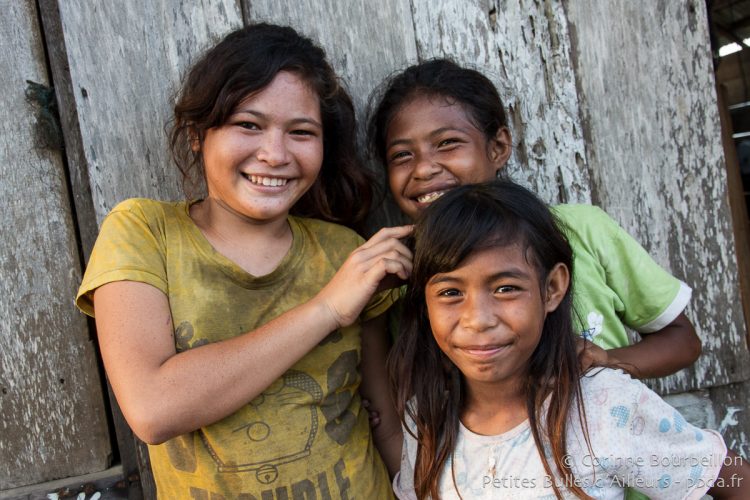 If you like the "village" atmosphere and the smiles of children, I invite you to re-read these articles, published during a trip to Borneo, in 2009:
→ Derawan (Indonesia): Bouilles de mômes
→ Mabul (Malaysia): A village full of life