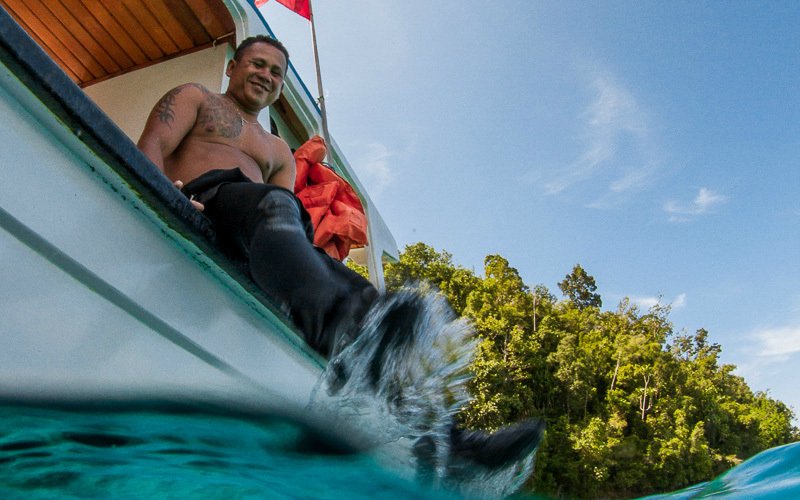 I like being under water. But I also like being on the water. Between two dives, in Weda Bay, I enjoy the pleasure of sailing, from one reef to another, from one creek to another, under the Indonesian sun.

Sailing on a dive boat

It was March 2013. I'll take you back to Weda Bay in Halmahera, the big island in the north of the Maluku archipelago, in Indonesia.

I'm staying there, at Weda Resortfrom where we go diving in the bay every day: 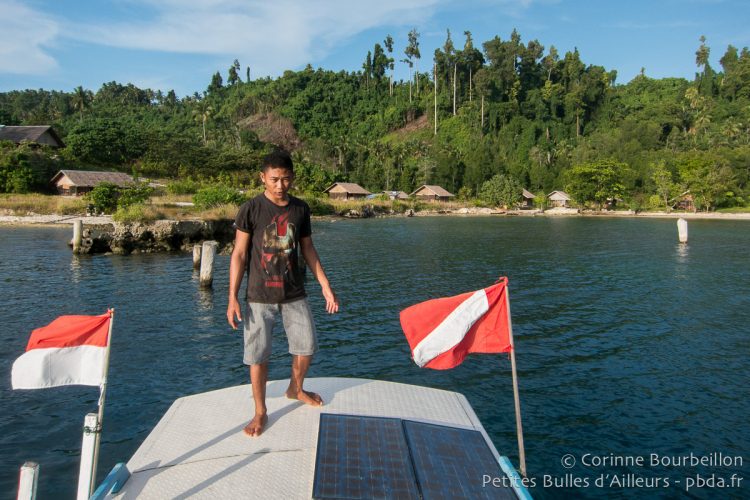 Underwater, I marvel at the beauty of the underwater world or tiny creatures like the seahorses-pygmies. 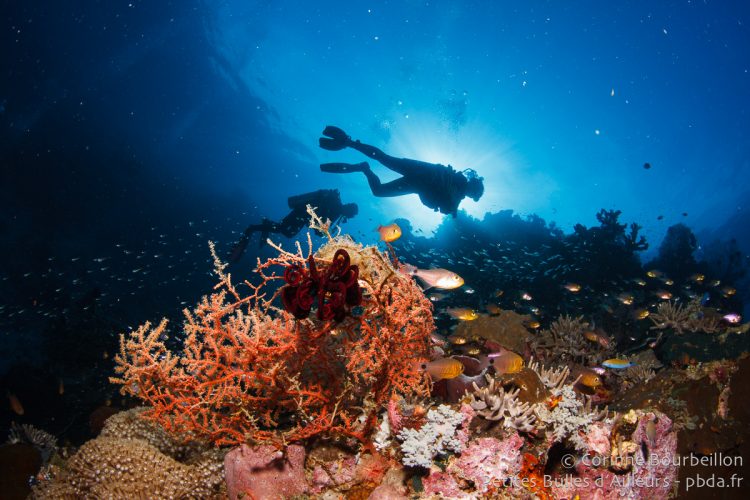 But on the water, I marvel too.

I love being at sea. I love being on a boat sailing at the end of the world. I like to contemplate the horizon and the wake when we cross the bay, I like to see the forest pass when we go along the shore, without knowing yet what we are going to discover. 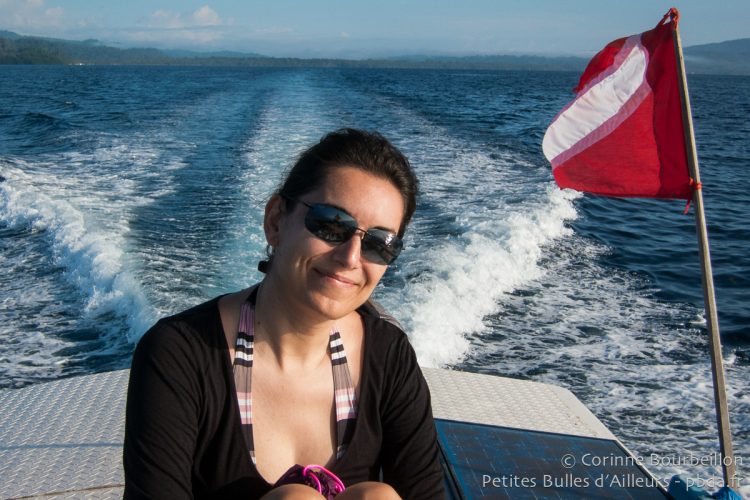 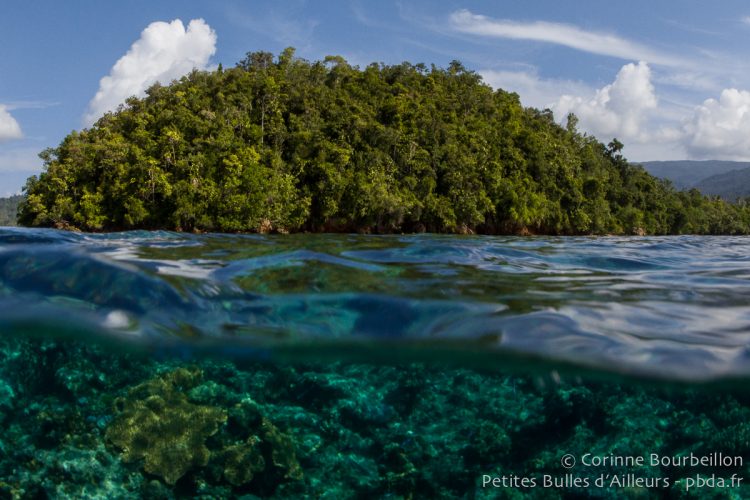 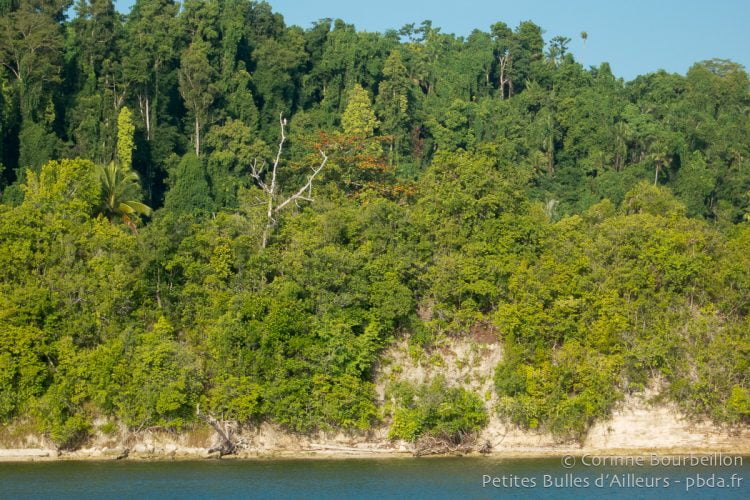 The atmosphere on the boat is nice.

We are very small. Four to six divers depending on the day, our two Indonesian guides Johnny and Radyal, two crew members, and sometimes also Rob, the owner of Wesa Resort, which is added as a guide when necessary.

I note with amusement that I'm not the only crazy underwater photo lugging my Canon SLR in a bulky, watertight box in the depths of Indonesia. On the boat, a Dutch couple has the same Ikelite equipment as me for their Nikon. On the left, my camera, on the right, theirs: 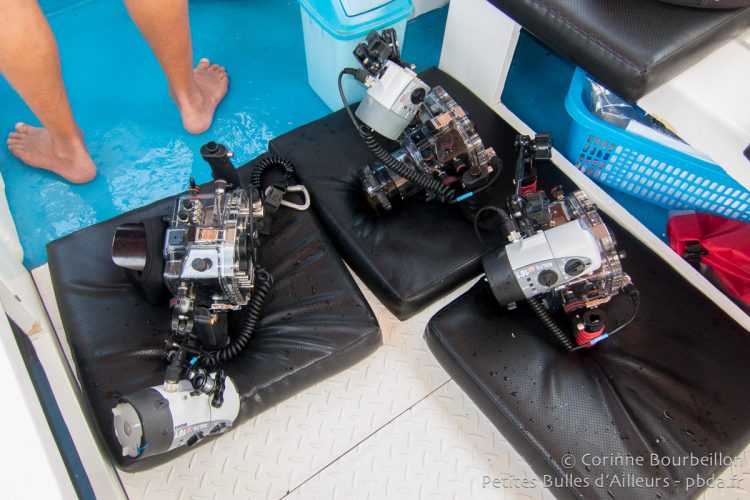 Between two dives, we sympathize, we tell nonsense, we take a picture ... We savor the pleasure of being there, away from everything, nose to the wind, under the sun.

On two occasions, during our trips, we came across dolphins players. The Indonesian crew and our guides are never bored by the show and are as enthusiastic as we, the divers-divers ...

And then, there are the chance encounters, as we go along, from one dive site to another: sometimes fishermen, or people sailing from one village to another, on a traditional pirogue. 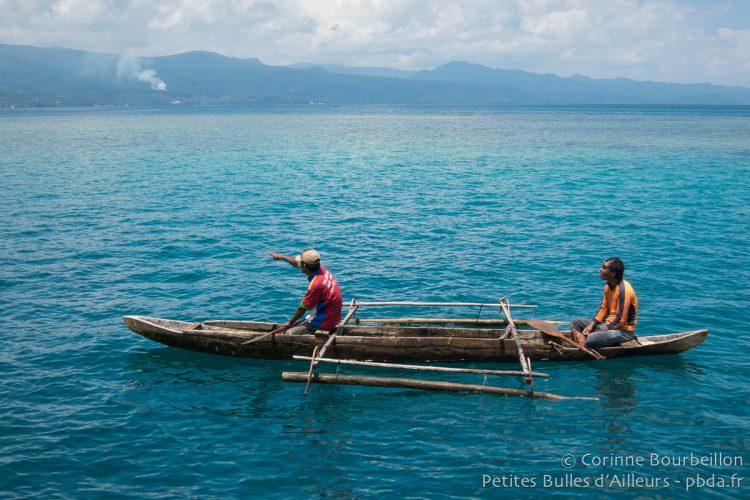 We also get a close look at a sight that is less pleasing to the eye, but which has a significant economic, social and environmental impact on the local population: the huge cargo ship of a mining company.

It can be seen in the distance, from the resort. Barges permanently store ore there. 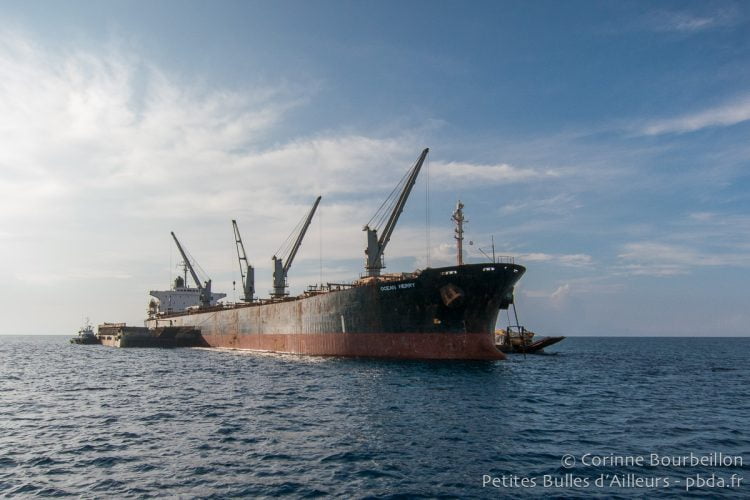 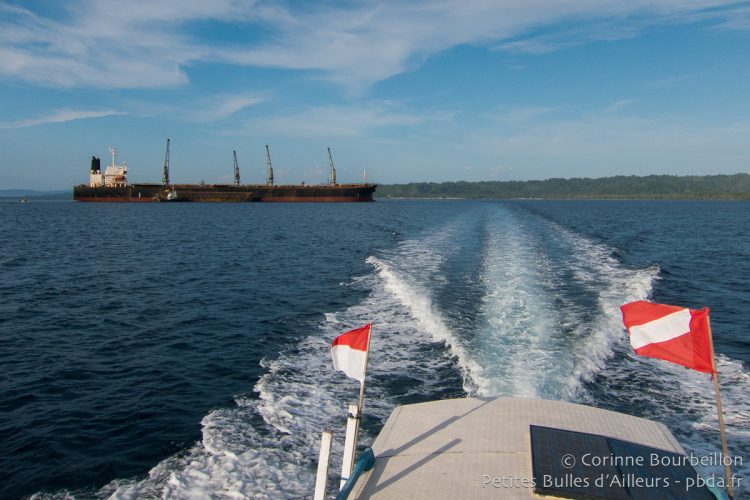 Mining operations, there are everywhere in the archipelago, and more and more. Here in Halmahera, but also in North Sulawesi or in the Papuan peninsula, to name some areas where I traveled recently. The wealth of basements, nickel, iron, gold, cobalt, etc. arouses the greed, Chinese companies in particular.

Below, a map of 2011 found on the PWC.com website. Even if it is not readable on this scale, each point of color representing a mining area, we can see the magnitude of the phenomenon ...

The beautiful Bangka Island (North Sulawesi), where I also went on this trip in March 2013, after a first stay in July 2010 (and I'll get back to you in future posts), should escape a mining projectwhich promised to be destructive.

According to the environmental policy of mining operations, the ecological consequences are more or less catastrophic: deforestation, poisoning of soil and river water, accumulation of sediment near the coast that is gradually suffocating the seabed...

During their first installation in Halmahera, a few years ago, Rob and Linda, the owners of Weda Resort, had to completely review their project and resign themselves to changing places, because of the proximity of one of these mines.

Their new Weda Resort, the one where I lived, between jungle and mangrove, is located near the villages of Kobe and Sawai Itepoand not too far from another mine, Weda Bay Nickel. But, for now, the owners of the Weda Resort seem to maintain a good relationship with this company. It claims to care more than others about the ecological, economic and social impact of its activities (what others dispute, see the links that I added a little lower, in November 2013).

Interesting detail: the mine Weda Bay Nickel is operated by French people, in cooperation, among others, with the Sandouville factory near Le Havre, in Haute-Normandie (Sic). Visit these links, they bring a lot of information on the region and the operations conducted by the French mining company. 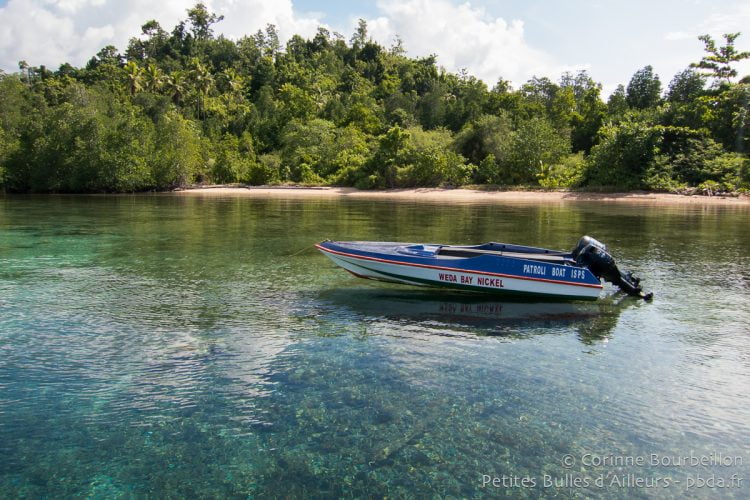 For my part, I did not conduct the investigation and I am not in a position to give an informed opinion on the matter. In addition, Weda Bay is huge: from one area to another, I imagine that situations must be very diverse. I came here as a tourist, just diving, and all I could see was that in Weda Bay there were still splendid coral reefs.

Nevertheless, there is cause for concern: will Weda Bay remain as beautiful and relatively unspoiled as it appears to be today?

I have just come across some articles concerning the Weda Bay Nickel company, which do not bode well, alas:

→ Indonesia: Nickel for a Piece of Bread [International mail]
→ Eramet mine in Indonesia: report denounces land appropriation [Alterasia.org]
→ An alarming report on violations of community rights [Amisdelaterre.org]
→ Selling their nickel for a dime [The Jakarta Post]

Between two dives, we also stop in small creeks for the time of the "degassing" interval. We have to let a good hour pass, so that our bodies eliminate the excess nitrogen accumulated during the first dive.

Most often, we take advantage of this rest forced to snorkel (swimming with mask and snorkel) on the surface. 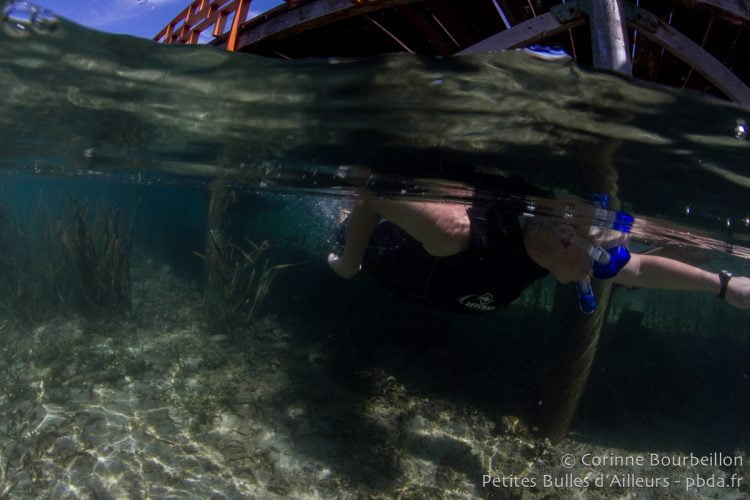 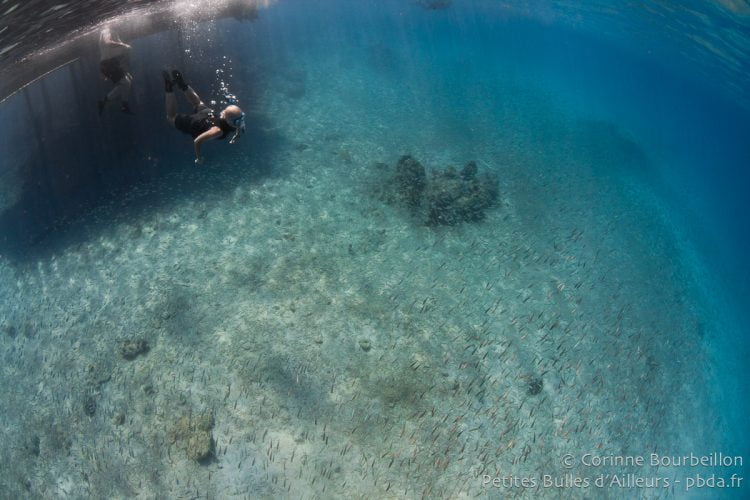 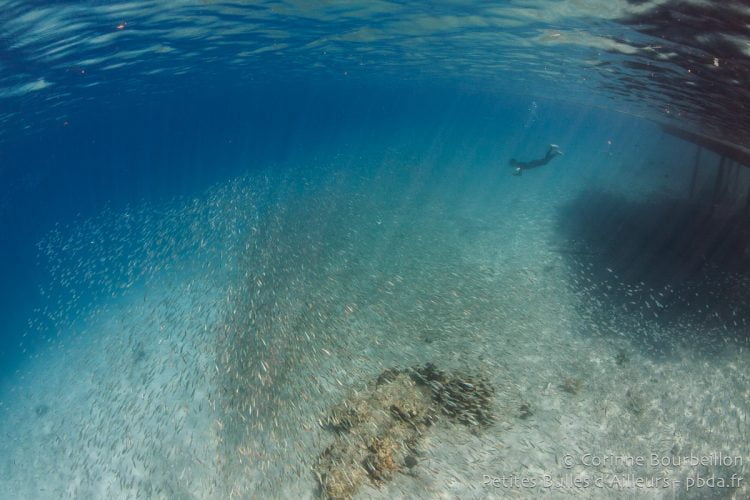 That day, it's a harpoon lesson. 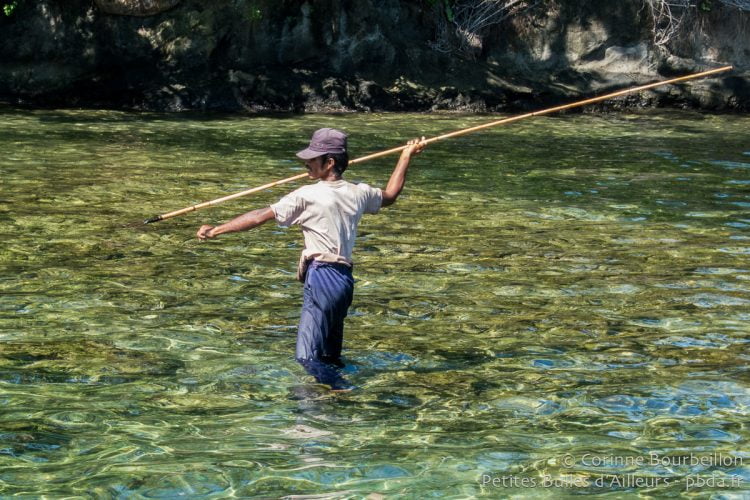 We went a little further south in the bay, I think, to a place that I would be hard put to locate on a map. Apparently, it's near a village.

On the pontoon, there are two little boys and, not far away, a gentleman whom I suppose to be their father. Children play in the water. He walks the shallow waters of the cove with his harpoon.

The kids, all naked, hastily retract T-shirt and bermuda discovering that there are ladies on the tourist boat mooring. 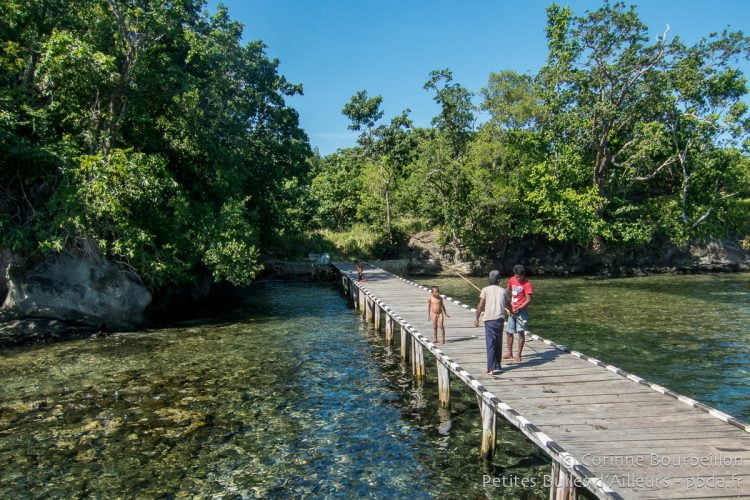 Around the pontoon, in an incredible turquoise blue water, there are tiny schools of fish. 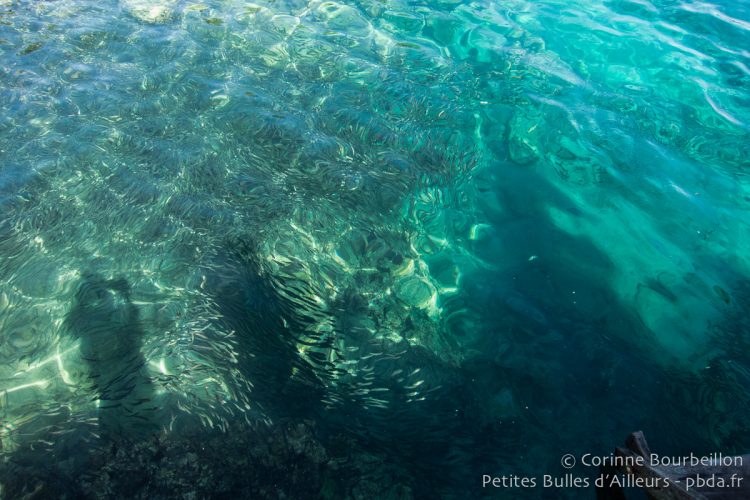 Our fisherman arrives to harpoon them with a staggering precision. 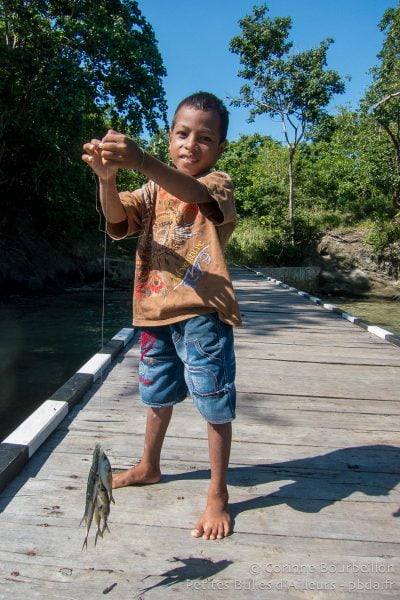 He brings back several of them, planted on the spears at the end of his harpoon, with each throwing.

One of the kids proudly takes the pose with some of the catch of the day.

While our guides are chatting with the fisherman, we, the tourists, are playing tourists: we are taking pictures and admiring the view.

Michael, my diving buddy, gets back in the water with his mask, snorkel and flippers for another snorkeling session. He can't get enough of it.

The fisherman, to impress us, returns to the water harpooning a moray eel, which he deposits at our feet. The poor squirms violently on the hot planks of the pontoon. But his ordeal will last only a few minutes, the man quickly rejects the water. Obviously, it must not be terrible to eat, the moray eel ... 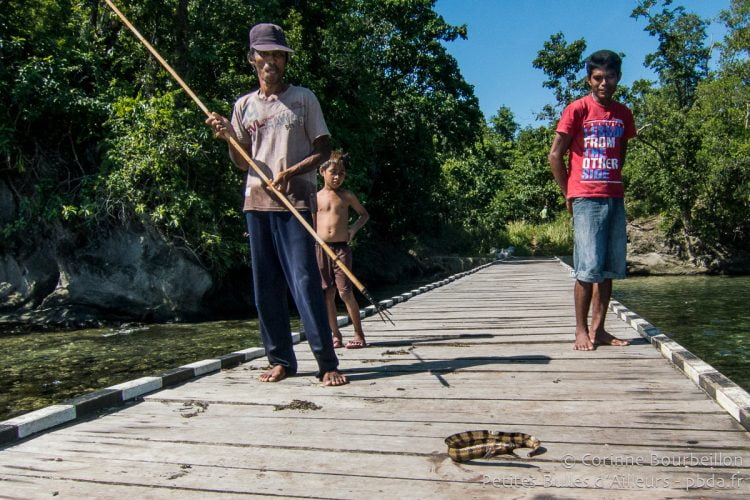 But our surface interval is coming to an end. We must go back on the boat. We go back to diving, leaving the children to return to their games and the guy to his fishing. 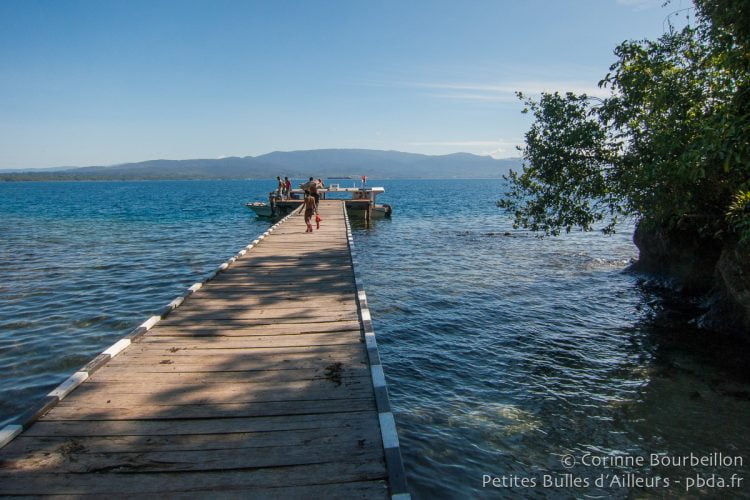 Now that I'm back in France, far from the bay of Weda, I enjoy reminding myself of these nice little stops between two dives, to review these pictures.

Unique moments, just as precious, in my eyes, as our underwater explorations!