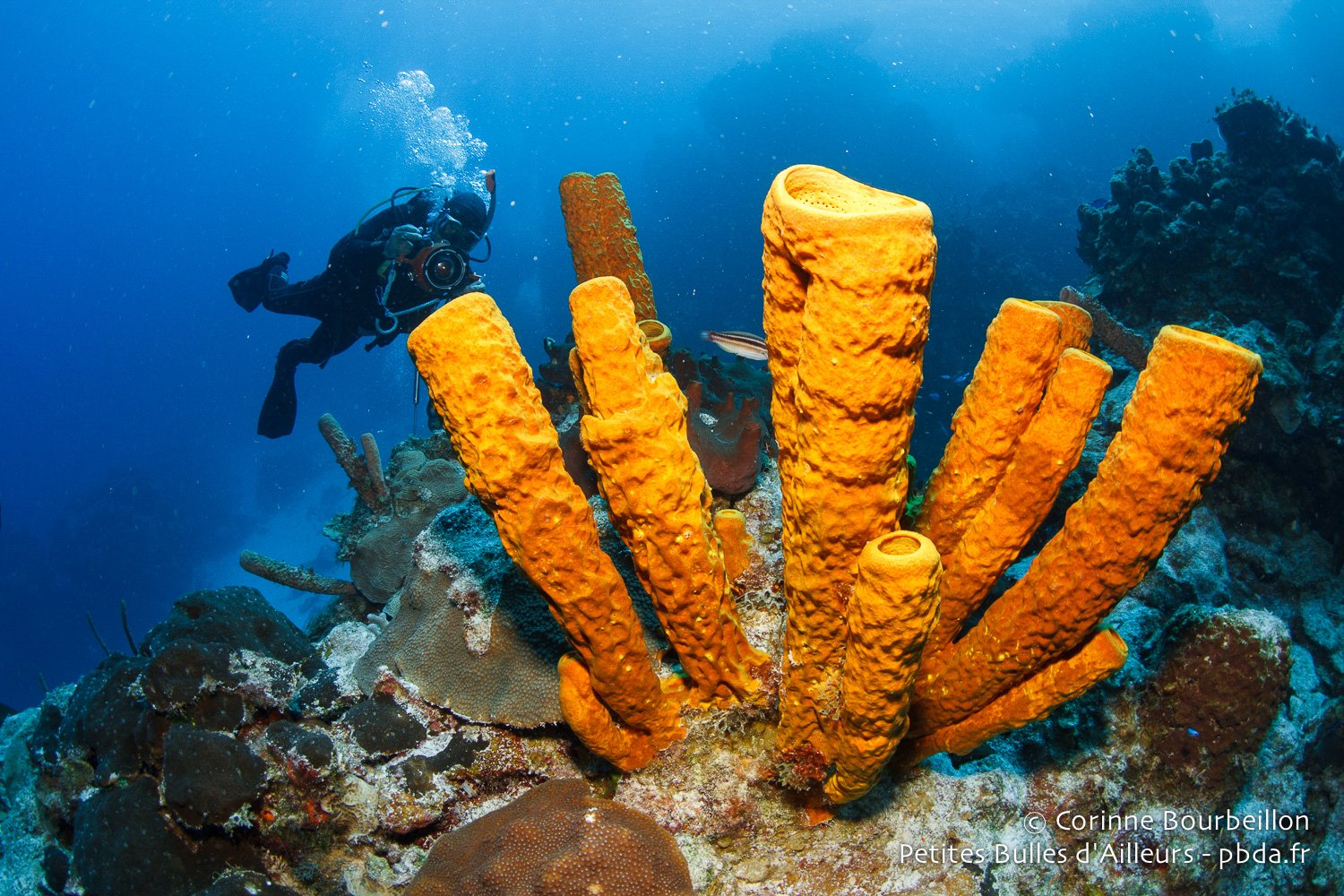 The Caribbean Sea is a change from Asia! In Mexico, I couldn't miss the island of Cozumel, a famous diving spot.

July 2014: new exotic place, new underwater world. This summer, I chose to discover the Caribbean coast of Mexico, that of the state of Quintana Roo. The region attracts me for its fabulous cenotes - these submerged caves revered by the Mayans that can now be explored by scuba diving - and  its spectacular gathering of whale sharks, off Cancún, which I dream to see for years ...

Between the cenotes and the whale sharks, I couldn't pass up the island of Cozumel, explored by Cousteau in the early 1960s. It is THE diving spot of the Yucatán Peninsula, the most famous of the area! Thanks to Cozumel and diving, I met Sergio, a great character...

His full name: Sergio Sandoval Vizcaíno. A pioneer of diving in Cozumel, where he has lived since 1979, he celebrated his 74th birthday in early 2015 and is still blowing bubbles underwater!

UPDATE - OCTOBER 10, 2018. I just learned, via Facebook, the passing of Sergio, four years after our meeting in July 2014... He was 77 years old. I have not been to Mexico since. Never again will I have the opportunity to dive again with Sergio, who made me discover the magnificent reef of Cozumel. I let you re-read or discover below what I wrote at the time.

The man is an inexhaustible storyteller, picturesque as can be. Concerned about his physical condition, he avoids alcohol and drinks sea water regularly, convinced that "it's good for your health" !

He often demonstrates it on his boat, to impress the customers he takes diving... But in fact, he doesn't drink it pure! He just dilutes a little sea water in a bottle of fresh water.

Sergio may be a scuba diver, but he never discards his snorkel, which is attached to his mask, because it saved his life long ago. Lost at sea after a dive, he drifted for several days in the middle of the sea before being rescued. His snorkel allowed him to breathe on the surface without swallowing water and to avoid drowning.

A former automotive mechanical engineer, Sergio is also a passionate underwater photographer and a patient do-it-yourselfer: he makes the waterproof housings for his cameras himself, in his workshop, at home! Finally, this septuagenarian is obviously not "digital native", but since he discovered GoPro and social networks, he publishes a lot of small underwater films on Facebook.

Above all, Sergio is particularly familiar with the dive sites of Cozumel and the fearsome currents in the strait between Playa del Carmen and the island. Day after day, on each outing, he monitors the health of the corals and fish, takes underwater photos and, back on land, praises the beauty of the underwater world to the tourists.

He is a passionate and exciting man, warm, multilingual, extraordinarily friendly. I am delighted to have discovered the Cozumel Reef with him.

Sergio's house, in San Miguel, the big city of the island, is known by all taxi drivers under two names: Aquarama, which is now the children's swimming school run by her daughter and granddaughter, whose lessons take place in the garden swimming pool (Aquarama is also the name of one of his ships); and Aquatic Sports, which refers to the small diving structure he runs with the help of his wife Lolita.

Long involved in the preservation of the sea bed, Sergio Senior (to distinguish him from Sergio Junior, his son, who bears the same name and also organizes diving and deep-sea fishing trips) is today one of the oldest diving operators in Cozumel. He is also one of the pillars of the Scuba Fest annually, in December.

At Sergio's house, a Virgin Mary watches over the pool from her alcove and newspaper clippings, framed and hung on the walls, salute the aquatic exploits of her daughter and granddaughter, both named Beatriz.

A generation later, in 2009, the second one, nicknamed "Betty", then 13 years old, tried to beat her mother's record, but unfortunately the currents carried her too far from the island, preventing her from reaching her goal. The little girl still swam nearly 13 hours in a row... At the Sandoval's, we really like water, it's in the family!!!!

The fabulous reef of Cozumel

For the underwater photographer that I am, who enjoys diving "à la carte" and preferably in small groups, Sergio's family structure is ideal. As he also takes pictures, I often finish the dives in pairs with him, while Cristobal, his young dive-master, supervises the rest of the dive.

Between two immersions, it's a "salsa-guacamole-ham-cheese-fruit" picnic on the boat Aquarama. The atmosphere is relaxed and international.

During this week spent in Cozumel, I dive, depending on the day, with a young Belgian couple, an American, a German and a Japanese couple, with whom I discover common knowledge in Indonesia - they often dive in Asia, like me. They are great friends of Sergio and Lolita, they regularly come on holiday to Cozumel.

Underwater I discover an environment different from what I am used to in Asia. The species of rays, for example, are not at all the same. There is also an abundance of large angelfish (of the family Pomacanthus, says a reader of the blog) that reminds me of the Asian batfish.

And then, in these waters, the flying scorpion fish ("lionfish") is an invader: these fish, which originate from Asia, were introduced into Mexican waters of the Caribbean Sea, where they have no predators. They are voracious and proliferate to the detriment of other species, unbalancing the ecosystem. Professional divers are allowed to kill them when they see them.

Update - May 3, 2015 : AFP has just published an infographic on the subject, which sums up the situation well. I insert their picture below.

The Cozumel reef is much more beautiful than the sites opposite, on the coast around Playa del Carmen. I had a great pleasure to explore it, even if I found it less exuberant and full of life than the Indonesian or Malaysian spots I like so much.

The "usual" tropical fauna is very present, but the density and diversity seems to me to be less... Which doesn't prevent us from making some nice encounters, the proof!

My favorite sites on the Cozumel Reef are in the area called Palancar, where there are huge and spectacular coral formations. Their yellow and pink outgrowths are at their most beautiful under the glow of the flash.

For divers, it's a fantastic playground: there are cavities to explore, arches and passages to squeeze through and lots of life to observe.

To learn more about diving with Sergio Senior in Cozumel, I refer you to these links:
→ The Aquatic Sports Center website
→  His Facebook page