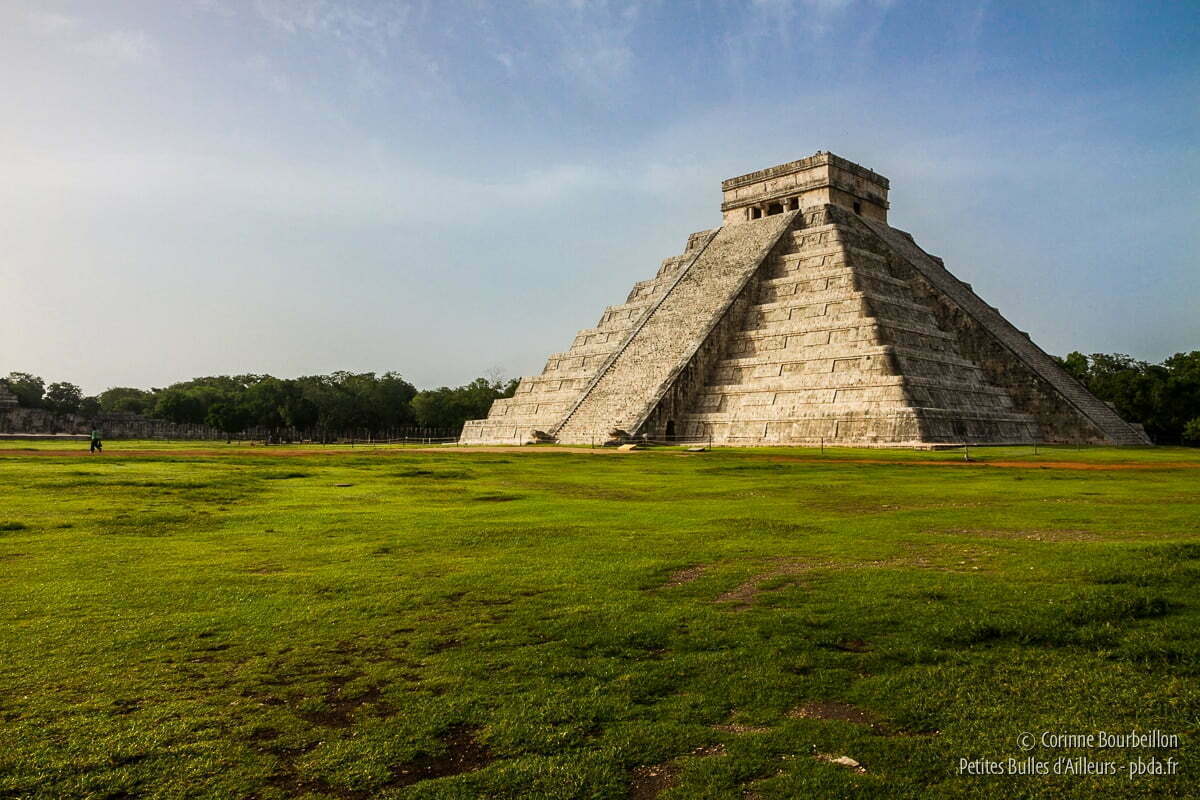 The girl who wanted to see the Mayan pyramids

The old stones of Mexico are worth a visit. And Indiana Jones can (again) go and get dressed. The mysterious Mayan pyramids are mine!

There's more to life than diving... 😉 During my stay in Mexico in July 2014, I couldn't ignore the pyramids of the ancient Mayans, which are nearby. Here are four archaeological sites that I took the time to explore between two dives, and that I highly recommend visiting if you travel to the Yucatán peninsula:

July 2014. Scorching heat. In this season, in the Caribbean Sea, the Mexican sun is beating down. In front of me, the remains of a small grey stone pyramid in the middle of a clearing, surrounded by vegetation.

A large iguana watches me out of the corner of its eye. I slowly approach it to take its picture.

We are in San Gervasio, a Mayan archaeological site, created around 100 BC and occupied until the 16th century. Surrounded by a patch of jungle, it is in the centre of the beautiful island of Cozumel, located off the coast of Playa del Carmen and Cancún.

There are old stones, trees hugging the old stones and a few hard-sweating tourists, more fascinated by the iguanas hiding in the bushes than by the old stones, really. Yet this small site dedicated to the Mayan goddess Ixchel - goddess of fertility, the moon, medicine, weaving - is not lacking in charm. An ancient paved road, a graceful arch still standing, several temples and buildings in fairly good condition. The place is peaceful, far from everything.

I rented a scooter for the day, to explore Cozumel quietly. San Gervasio is my first Mexican "cultural" excursion, my first Mayan pyramid!

A few days later, I leave Cozumel, where I spent most of the week exploring the beautiful coral reef of the island. I now head for the beaches of Tulum and its archaeological site (created in the 6th century, occupied until the 16th), a few kilometers south of Playa del Carmen.

I took the ferry at dawn in Cozumel, then boarded a bus that dropped me off at the guesthouse i-Tour, located at the crossroads of two main roads in Tulum. I went for the budget option for the one night I plan to spend here. The accommodations on the beach are crowded and overpriced, mostly flanked by bars with sound systems for nightly beach parties...

For just sleeping and walking around during the day, i-Tour is a good option. They have a lovely welcome (in French!), bicycles on loan, impeccable, comfortable and themed air-conditioned rooms (from Frida Kahlo to Hugo Sanchez), and several nice restaurants around. They are also a tourist centre: all the minibuses stop there in the morning for breakfast and at that time of the day, there is a big crowd in the little courtyard, which is quite a funny place (wink to Marie-Julie and her Taxi-Brousse blog, who stopped there).

I leave my bag and hurry by bike to the Tulum site in the middle of the morning. It's already a bit too late: the clusters of tourists transported from Cancún and Playa del Carmen start to pour in.

Here too, the sun is beating down. Tulum was a fortress-port and one can discover many well preserved buildings, on a cliff overhanging the magnificent turquoise blue of the Caribbean Sea. The light is intense, the place very beautiful.

But the crowd of visitors, more and more dense, spoils a bit the contemplation. I end up fleeing and riding my bike to a stretch of beach to complete this tourist day on the Riviera Maya.

The next day, I take a bus to Valladolid, an old colonial town a little further inland, where I plan to stay for a few days to explore the area and visit several other renowned sites, including the very famous Chichén Itzá.

Valladolid is charming and enchanted me from the moment I arrived. Not as big and not as far from the coast as Merida, it is the ideal base to explore the region. One morning, very early, I board a collectivo (collective taxi), determined this time to be the very first one to visit Chichén Itzá site that day.

It is THE most famous Mayan site, the most visited, the most beautiful archeological site, and a Unesco World Heritage site, and everything and anything!!! 😲

I'm so excited when I get there, that I indulge in the pure tourist Instagram selfie ... Well, it's not every day you can take a selfie in front of a Mayan pyramid... 😀

I arrive so early that the ticket booths are not yet open. I am really the first visitor of the day to pass the entrance of the site. It makes the staff at the ticket desks laugh, enjoying the calm before the day's tourist rush.

I had read mixed reviews about Chichén Itzá. For my part, it is quite the opposite, I will come out thrilled with my visit.

I start with the great pyramid. The light is still beautiful and soft at this time of the day. Some lonely people like me are already following in my wake on the vast grassy esplanade. The street vendors are starting to arrive. For them, it's a race. They rush with their handcarts through the alleys, quickly setting up their stalls of trinkets. They give me astonished looks.

Chichén Itzá is well worth a visit. The huge pelota court, the still intact sculptures and this vertiginous central pyramid are the highlights of the show. When I leave, at the end of the morning, I can barely make my way up the stream of the crowd on the opposite direction!

Cobá: Mysteries in the jungle

And then there is the lovely site of Cobá, scattered through the jungle. It too is easily accessible from Valladolid. You can rent a bike, or a two-seater, at the entrance. It's a pleasure to ride under the cover of the trees and to stop from one vestige to another.

I start with the great pyramid. One of the few where it is still allowed to climb. It's vertiginous, the steps are a bit collapsed and you have to hold on to a big rope to go up and down. But it is worth it. The jungle spreads out endlessly below, like a sea of green.

Here again, I managed to arrive early enough to feel almost like an explorer. But it doesn't last long... I comfort myself with the small pyramids still hidden in the greenery, where the crowd doesn't stop.

I'm publishing this post over a year after my July 2014 trip to Mexico!

If I have already talked a lot about the spectacular dives that I was able to do in the waters of the Yucatán Peninsula, but I still have some "terrestrial" memories to bring back to life. Other Mexican articles should therefore appear unexpectedly, as the next publications come out...

To find all the articles previously published about this 2014 Mexico trip, click on the link below... 😉