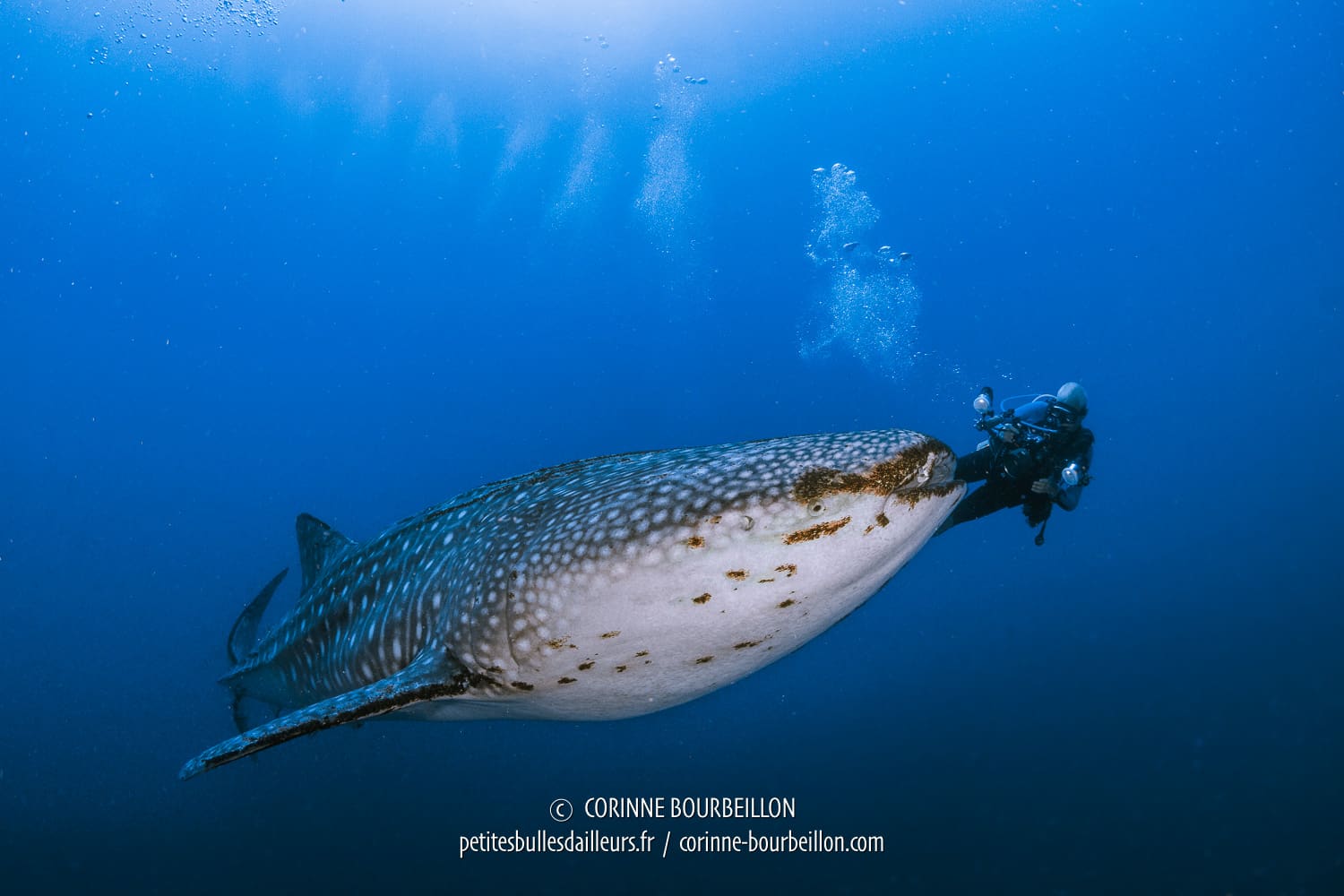 Marine biologist Steven Weinberg in tete-a-tete with a whale shark in the waters of Balicasag. (Philippines, May 2018)

In the Philippines, it is THE mythical encounter that all divers dream of: the whale shark, the biggest fish in the world.

I know someone who's been diving for almost sixty years and has never seen a whale shark before... 😄 This diver is the marine biologist Steven Weinberg !

Yes, the author of the famous identification books for underwater flora and fauna ...that biology-savvy divers eagerly seek out. (For the uninitiated, they even say "the Weinberg" about his works that are a reference, a bit like they say "the Bescherelle" for spelling books).

I was honoured and fortunate to have Steven Weinberg as a regular underwater buddy in the Philippines during the month of May 2018. It was while on an unforgettable liveaboard diving cruise at Tubbataha Marine Park, followed by a short stay in Panglao (Bohol Island). A trip organized by my friends Carol and Jérôme of the Equation diving center.

I thus shared with Steven Weinberg a great moment in his life as a diver and marine biologist: his very first encounter with a whale shark!!! 👌 Or more exactly his first two encounters with this splendid and harmless giant of the seas (this huge shark has no teeth, it feeds on plankton and small fishes).

The first time was at Tubbataha. The second one in front of the reef Balicasag...an island across from Panglao. Moving pictures are worth 10,000 words... So here it is. a short video that I did underwater:

Photographing a whale shark in "macro"...

Steven, who can be seen swimming vigorously close to the huge shark, had a "macro" lens on his camera (a magnifying lens made to capture the image of very small subjects). In short, impossible with this equipment to photograph a monster measuring 7-8 meters long!

And underwater, when you have an SLR camera locked in its waterproof case, you can't change lenses. Yes, it's a bit of a mess... 😂 Leaving with a configuration for "small" and meeting "big" during the dive, it's the kind of anecdote that makes underwater photographers scream with laughter... The Photo-Sub Forum went there from his little ironic comment on Facebook when he saw my pictures: "Who's that doing whale shark macro? 😱«

But while I was shooting wide angle shots, Steven, not discouraged by its configuration unsuited to the big beast, took advantage of his macro lens to photograph details: the eye of the whale shark as well as the parasites it was covered with (these are the black traces you can see around its mouth and on its fins).

These are very small crustaceans, which he managed to identify: "And who has pictures of the shark's eye and skin, infested with thousands of copepod crustaceans (Pandarus rhincodonicus), huh? And knock! » he replies to teasing people on Facebook.

I put some of his pictures below:

These "whale shark lice" can grow up to a centimetre long and actually feed on algae and bacteria on the skin. This would be less parasitic than commensalismIn other words, these small crustaceans take advantage of their host, but without harming it. They are a priori harmless for the whale shark, which has very thick skin (about ten centimetres).

My quest for the whale shark

Unlike Steven, I had already encountered whale sharks before these two memorable dives of 2018 in the Philippines... But I wasn't always lucky in my quest for the biggest fish in the world.

It should be noted that the species is threatened with extinction and a victim of shark-finning(fins are worth a fortune in Asia, where they are considered a refined dish, even aphrodisiac). For divers, encounters with this beautiful animal are rare and always impressive ...

"My very first whale shark was in 2006, in Thailand during a diving cruise in the Similan Islands. It was a chance encounter, which occurred on a landing. The animal, a rather young and curious specimen, had come around us for long minutes...

A year later, still in Thailand, this time in Koh Lanta, I thought I was going to meet a whale shark again. Alas, I will only admire it in a video, made by another diver who had the good fortune to see him in real life…

The following year, on my very first trip to the Philippines, hoping for a better fate, I decided to go diving to Sogod Bay (island of Leyte), bay known to be frequented from March-April by the majestic sharks. In vain. I did not see a single one during my dives. That's the way it is, the ocean is the one that decides...

The dark side of the feeding in Oslob. In the Philippines, the presence of whale sharks is almost guaranteed at the well-known whale shark spots in the Philippines.Oslob (Cebu Island) and Donsol (Luzon island). But I have always preferred to avoid these sites where hordes of tourists tumble and where are organized without caution for commercial purposes, the feeding of these wild animals (in Oslob) and snorkeling excursions. To better understand, I invite you to read the very informative post of the blog Little Travelers around the worldwhich explains the situation well.

The rather unshy whale shark that we were surprised to meet at Balicasag in this month of May 2018 (watch the video at the beginning of the article) was probably coming from the Oslob site in Cebu, the two islands being not far from each other for this big migratory fish, able to travel long distances ...

In the following years, I continued to dive a lot, mainly in Indonesia, but without ever coming across a whale shark again... It was in 2014 that I was able to admire several specimens again, snorkeling this time, during the annual Whale Shark Gathering off the Yucatán peninsulabetween the Gulf of Mexico and the Caribbean Sea.

From June to September, with a peak in July-AugustThey migrate by the hundreds into these warm waters, where they can be observed feeding on the surface (on tuna eggs, among other things). I discussed this here in the article below: 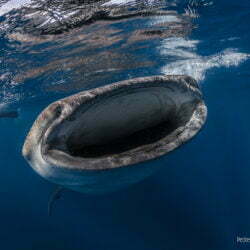 The huge mouths of whale sharks are worth a trip

To read also, this scientific article in English → Why Giant Sharks Swim To Cancun For Spring Break: The Science Behind The World's Largest Whale Shark Aggregation

This spectacular aggregation of whale sharks takes place off the coast of Cancùn, on the side of Isla Mujeres and Isla Contoy. The event is natural, but has also become a tourist attraction. For the past few years, boat approaches and boat launches have fortunately been regulated (only two people and a guide in the water at the same time per animal). It is therefore advisable to choose an authorized operator who is respectful of surface procedures, in order to disturb as little as possible the big fish banquet.

By going in this month of May 2018 on a liveaboard at the Tubbataha Reefs Nature Park, I knew I had a very good chance of running into a whale shark there... 😉

Tubbataha is indeed a marine sanctuary, protected since 1988 and UNESCO World Heritage since 1993. It consists of two atolls and of a shallow coral reef, located far from any inhabited land, about ten hours' sailing from Puerto Princesa (Palawan Island) in the Sulu Sea.

The crossing is possible and allowed to the boats of divers tourists than three months in the yearduring the dry season (mid-March to mid-June) when the area is not threatened by typhoons. It is THE mythical destination for diving in the Philippines. The park is home to many different species of sharks and fish, as well as manta rays, and the coral is beautiful.

→ Photos and video: diving cruise in Tubbataha in May 2018

For us, it starts very strong: from the very first day, during our very first dive in the morning, my dive team has the chance to observe a whale shark!!! 😲 Small preview in the sequence below, where I can be seen fighting with my camera (the video mode refused to start). Thanks to Jérôme d'Equation Dive Shop for the images:

As a result, while the whale shark is coming straight to meet me, I only manage to make two images (the pictures below), without adjustments, triggered in a hurry over the inoperative video mode...

Never mind. I'm enjoying the show. I admire the powerful lateral to-and-fro movement of its tail fin, the very graphic gray livery with white dots. It's really a very beautiful animal, very impressive. Its calm swim fills me with a pleasant feeling of serenity...

I can not believe how lucky we are. We end the diving amazed, happy.

So at the beginning of the cruise, I'm confident. There has been one, there will be more! 👌

But as the days go by, I end up jealous of my little comrades from the other palanques. Several of them, more polished than us, are going to meet the huge fish again! Which will not be our case. Well, in the absence of a whale shark, we'll still console ourselves with a manta ray...

And then, a few days after the liveaboard in Tubbataha, we experienced this second incredible encounter, totally unexpected, in the waters of Balicasag, whose video I put at the beginning of the article... a real surprise. Balicasag, it's a very nice dive site, but not famous for very big beasts like Tubbataha. Here, in principle, it is especially the kingdom of turtles!

The two divers at the front of our group are the first to enjoy the show. Jérôme of Equation Dive Shop, who guides us, knocks on his tank to attract our attention, because Steven and I are loitering far behind, busy with our cameras as usual. Jérôme is super excited and waves at us with a big gesture.

At first, I don't understand. Certainly, there is a magnificent school of jacks circling near the reef, but from there to get excited like that... And then I see an imposing shadow becoming clearer in the blue. A silhouette that I know well. No way!!! 😲

I immediately begin to palmarize frantically, to see it more closely, quickly, before the big beast runs away!

But the whale shark of Balicasag does not run away. He lets us approach it, our noisy, shimmering bubbles don't seem to intimidate him. It quietly performs large turns near the reef and the school of jacks, not too deep, between 8 and 18 meters, leaving us plenty of time to admire it, for a good twenty minutes.

This giant must be 7-8 meters long. He swims in no hurry, but we have to swim hard to keep up with his pace. Our air bottles are quickly emptied, so we have to abandon it reluctantly, but we go back up with stars in our eyes...