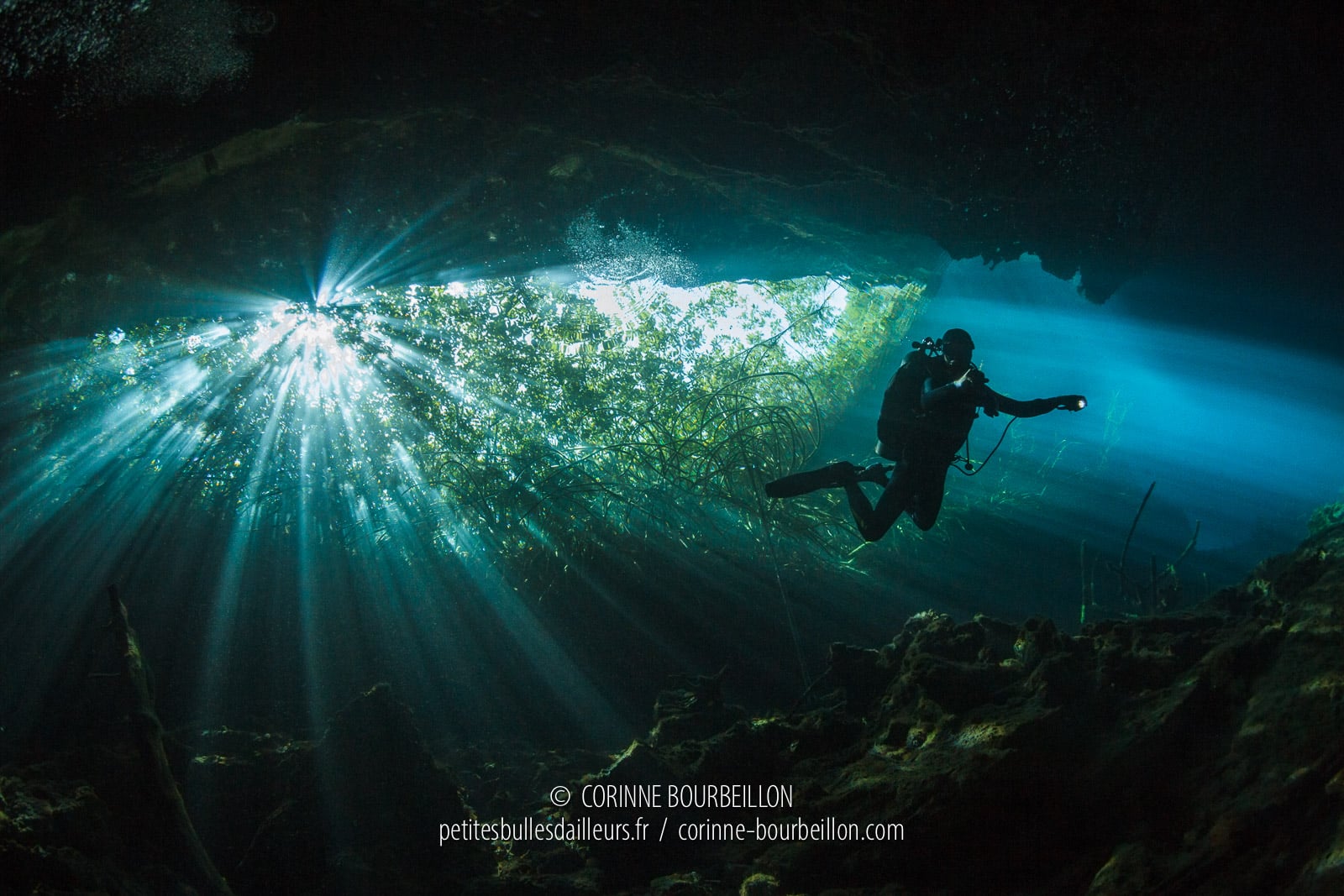 In Mexico, the Yucatán Peninsula is like a Gruyere cheese, pierced with fresh water holes called "cenotes". Sacred to the Mayas, the cenotes are today bathing places... and diving spots!

What are the cenotes?

The word maya "tzonot" or "d'zonot" gave "cenote" in Spanish (pronounce ce-no-te). These are holes, chasms, formed by the collapse of limestone rock, filled with fresh water.

The largest concentration of cenotes is found in Mexico, in the Yucatán peninsula. They are everywhere, of all sizes, scattered in the jungle, but also in the heart of towns and villages, which have developed around these natural wells.

Above : the superb Ponderosa cenote, also called Garden of Eden, and the Valladolid cenote, adjacent to a bar-resto in the heart of the city. Signs warn of the danger for the unwary who would like to dive. (Mexico, July 2014)

In the north of the Yucatan Peninsula, there is a series of cenotes that are arranged in a ring around the Chicxulub crater. That's why they're thought to have been created by the impact of a meteoriteIt could even be the meteorite that caused the extinction of the dinosaurs!

Below are some diagrams found on websites, which allow you to visualise the trick.

Subterranean fractures connecting Mexican cenotes form a huge network of galleries and sunken cavesThe water table can be connected to the water table or, near the coast, to the sea.

For the Mayans, these water holes were sacred placesa mouth open to the other world. Some cenotes were places of worship, where offerings were thrown and sacrifices were made, both of animals and human beings.

A strange animal, the coati

When the cenotes are in the middle of the jungle, you can sometimes see a strange creature emerging from the cover of the trees. Long nose, clawed legs, long bushy tail.

A coati. The Mexican version of the raccoon.

Tourists on a picnic attract coatis. They do not hesitate to beg for a piece of sandwich, standing on their hind legs. The animal reminded me Indonesian cuscus…

But let's get back to the cenotes.

Today, cenotes have become tourist attractions. The surroundings of the most famous ones are equipped to allow swimming, snorkeling (fins-mask-tuba), scuba diving.

Showering is mandatory before swimming in some cenotes, to avoid that sun creams and anti-mosquito products pollute the water.

The cenotes most frequented by swimmers are in the open air, surrounded by trees, open to the outside. But you can also splash around inside cenotes that are buried underground: these caves can be reached via a staircase that descends in a spiral staircase or steeply in the rock. Below, a generator provides the light... I visited several of them, including one 18 m underground!

I confess: I never dive in fresh water, I'm not particularly fond of caves, even when they're dry, and cave diving doesn't appeal to me much. But the spectacular underwater photos taken by other divers in the famous Mexican cenotes in the middle of the jungle had captivated me. And made me want to see them with my own eyes! So, this summer, I fell for the idea. I went there in my turn, to make my own pictures...

Some cenotes give access, via galleries full of water, to underground rooms, whose ceilings are pierced with openings, more or less wide, towards the outside. When the hole is small, the rays of sunlight that pass through it make like blue laser beams in water !

I came for these unique plays of light, particularly beautiful in the cenotes where I chose to dive: Ponderosa (Garden of Eden), Tajma Ha, Car Wash, Grand Cenote.

It's hard to explain, to share the absolute fascination of places like this. What could be more exhilarating than to photograph water, light, mineral and plant life together, brought together here by a unique geological chance!

I lived in the cenotes magical momentsA new sensation. Nothing to do with diving in the sea. Immersing yourself in the chasms revered by the ancient Mayans is no mean feat.

Feeling like Indiana Jones underwater is exhilarating. In the cenotes, I was 10 years old again!

Another strange phenomenon in the cenotes, which I was able to experiment in particular at Tajma Ha : where a layer of fresh water is superimposed on a layer of salt water, the water seems to split in two. It feels like a line, like when you're on the surface, between the air and the water. Except you're submerged, in a gallery full of water.

I do not have a photo that can show you that... We go down and we raise our head, we have the impression to come in and out of the water. But not at all. We are always immersed. Very disturbing, very disturbing. This is called a "halocline". Luckily I had been warned about it before diving, because at the time my poor brain could hardly understand what was going on. Especially since the phenomenon in question occurs when we are in a totally underground environment, without any external glow. Almost frightening, I admit.

The underwater skull signs signaling the entrance to galleries that it is risky to explore impressed me less than this strange sensation of half-air, half-water, regulator in the mouth, in crystal clear water...

Above, the underwater panels at Grand Cenote and Taj Maha. (Mexico, July 2014)

Some practical info & #8230; I really wanted to explore the cenotes in good conditions for taking photos. So i opted for a small structure, knowing from experience that it would be easier to "customize" my requests than in a large center.

My choice was O2 Mexicobased in Playa del Carmen, which I contacted before leaving. This will be the only thing planned a little in advance on this trip to Mexico.

Good luck! Great reception, great service. With customised and almost private diving: I ended up just with a buddy or alone with a guide. In short, luxury according to my criteria.

My guide in the cenotes, Clément Prandi, is himself an underwater photographer (see his site Facebook Mystic Vision). He was therefore particularly sensitive to my wishes and even paid with his person, regularly playing the models, always going to the right place at the right time for my images...

Clement suggested that I go and visit this cenote apart, called Playa del Carmen, near Tulum, Car Wash, because before, people came to wash their cars there... Bacteria make up a kind of opaque layer on the surface.

The Car Wash cenote gives access to a cave and galleries, where big tree roots and stalactites follow one another at the entrance... A plant cathedral and mineral cathedral. All this in a water capped by a green, opaque ceiling, which only lets in a diffuse light.

It's both beautiful and a little scary. But Indiana Jones and Crocodile Dundee were watching over me.

There is a small crocodile, a real one, living in this cenote. I was hoping to at least photograph its silhouette against the light. But he was hidden somewhere, in the mangrove, and did not deign to play the extras... So Clément paid of his person and took the pose for my photos.

Finally, a little word for my diving readers, who always want to know what suit to take in their luggage... In the cenotes, the water is "fresh" according to my criteria. About 24-25 ° C.

Yes, it is cold compared to the sea, which is 28-29°C in July on the Caribbean coast of Mexico.

For the simple swimmers, snorkelers and swimmers, immersing yourself in the cenotes is very pleasant... Especially when there is an overwhelming tropical heat outside, as is the case in July in Mexico. You can splash around as long as you want to cool off, and get out when you've had enough.

But for divers, it's totally different, you don't feel the water temperature at all in the same way.

This is one thing I often have trouble getting across to my non-diving friends, especially those from Brittany... For them, water that exceeds 17°C is just science fiction and they find it "good" as soon as 14°C!

The temperature of thermal neutrality for the human body, i.e. at which heat loss and production are balanced, is 24 to 26°C in air, compared to 33°C in water.

My little person being more sensitive than average to these physical and physiological laws (a complicated way of saying I'm cold), I put on a 5mm hooded shorty, over my old long suit (also 5mm), to be able to last an hour under water without coming out completely cold. It worked very well, the double layer was effective.

I therefore recommend extra protection for the most chilly, to explore the cenotes. The hardcore can try a simple 5 mm wet suit without any hoody. But it will be more comfortable with an extra layer.

The cenotes are great. Must do if you are traveling to Mexico, whether you are a diver or not.

These are spectacular, magnificent places. Accessible to all. And for saltwater divers, the experience is really different, rich in thrills. Unforgettable.