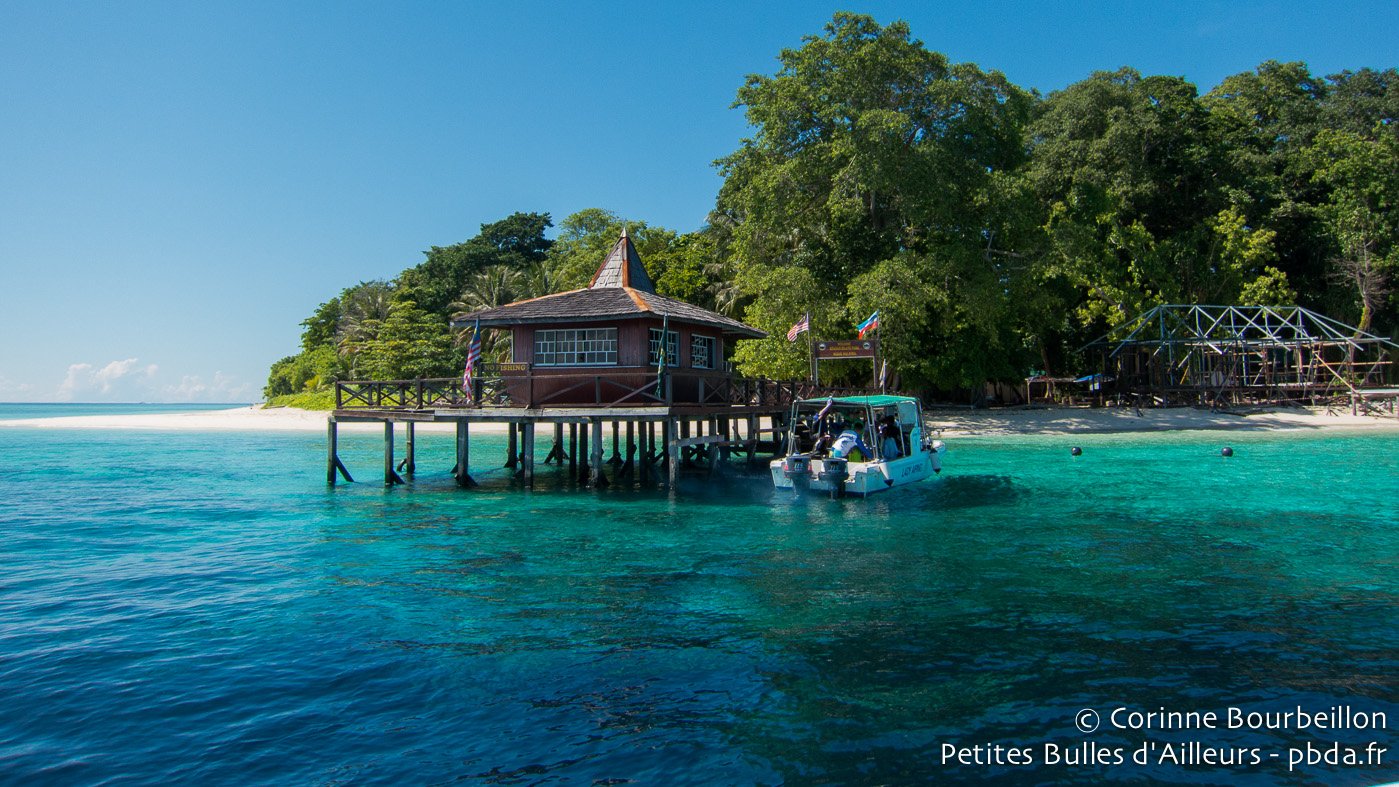 Divers under supervision in Sipadan

Sipadan. An island explored by Cousteau. A dream of divers. But a dream under military surveillance, for the safety of tourists and the preservation of the reef.

Sipadan, a small island off Borneo, in eastern Malaysia, is one of the most famous diving spots in Asia. Reputation not usurped.

Of course, you better like fish to appreciate the place as it deserves... 👌

I have already posted a few articles on this new journey of 2013:

For the underwater environment → Sipadan underwater in pictures
To see a shark up close → Sipadan: a video, a shark, a minute
For the details of my July 2013 trip to Borneo → Diving in the blue of Borneo

Sipadan is where and how do we get there?

A few small practical and geographical details to start, because I am inundated with emails asking me for information about Sipadan ... ????

Sipadan is a tiny island, located in eastern Malaysia, in northeastern Borneo, near the border with Indonesia. The island is part of the Malaysian state of Sabah.

A significant advantage of this fabulous diving spot is its easy access, via Tawau airport: there are direct connections with Kuala Lumpur in Peninsular Malaysia, or Kota Kinabalu in East Malaysia on Borneo (see theAir Asia and Malaysia Airlines).

Once in Tawau, you have to go to Semporna, the port from which boats leave for Sipadan and Mabul, the neighboring island. The journey by road takes about an hour. There are many taxis waiting for the client at the airport.

It takes about an hour to cross Semporna to Mabul by boat. Then, since Mabul it takes another twenty minutes to reach the island of Sipadan itself (be careful, as long as there are waves, the crossing time is easily doubled).

An oceanic island explored by Cousteau

Turquoise water and white sand... "Wow" effect guaranteed when the sun is shining.

Sipadan is a very special island. It is the only oceanic island in Malaysia. This means that it is not just a landmass in the extension of a continent, but an island of volcanic origin, created by the activity of the earth's crust on the ocean floor.

Sipadan herself is very small. The island is perched on a vast coral reef, atop an ancient volcano.

This forms a vertiginous underwater cliff, which sinks to about 600 m below the surface. These particular geological conditions have favored an incredible abundance of life and underwater biodiversity. (Click on the pictures to see them big.)

Malaysians Clement Lee and Samson Shak, British Ronald Holland and American Randy Davis are considered the "discoverers" of the island's underwater riches and the "pioneers" of diving in Sipadan. In 1984, they started the very first commercial diving operation there, which still exists today, Borneo Divers.

But it is the Frenchman Jacques-Yves Cousteau who made the island famous, after his passage with the Calypsoin 1988. Amazed, he was quoted as saying: "I've seen places like Sipadan before, but that was 45 years ago. What we have here is an intact work of art. »

In Sipadan, Cousteau shot a documentary entitled The specter of the turtle (1989), whose spectacular images of the cave sheltering a turtle cemetery, with skulls and whitish carapaces on a sandy background, have marked the minds. There is a rational explanation for this turtle grave: lost in the bowels of the cave, they would have perished asphyxiated, because they could not return to the surface to breathe.

My name is not Cousteau and I only visited the entrance to the Turtle Tomb Cave, a vast room in the dark intimidating. I still brought a small video, which I will post in a future article ... (EDIT: the video is online, see here.)

An island under high surveillance

Sipadan is also known outside the small world of diving because of the dramatic history of hostages of Jolo, in 2000.

About 20 people - a group of foreign divers and Malaysians - were kidnapped in Sipadan by Filipinos of the Islamist separatist group Abu Sayyaf, then taken away and sequestered on the nearby island of Jolo. extreme south of the Philippine archipelago.

Since then, the Malaysian army has deployed men to Sipadan and the surrounding islands. They are there permanently, patrols plow the waters of the region. The security of the tourists is thus (in principle) assured, but it is always a little odd to see guys with weapons and trellises on the white sand beaches ... I already talked about it during my first stay in 2006.

UPDATE: Security in Semporna / Mabul / Sipadan. I receive many questions on this subject, I remind you that this article, published initially in December 2013, concerns my stay there in July 2013. I added in comments new information, in answer to readers ...

June 15, 2014After new kidnappings of tourists in November 2013 and April 2014, in two isolated resorts in the region, I published a first long comment under this article, compiling several news and updates on this subject, which you can read at the end of this link:
→ https://petitesbullesdailleurs.fr/plongeurs-securite-sipadan-20131215/comment-page-1/#comment-6754

August 26, 2017I have posted a new comment, in response to a reader, compiling the latest information I found on the situation at that date, to be seen by clicking on this link:
→ https://petitesbullesdailleurs.fr/plongeurs-securite-sipadan-20131215/comment-page-1/#comment-7960

Various measures have also been taken for the environmental protection of Sipadan and its reef, after the island, the subject of a dispute with neighbouring Indonesia, was officially awarded to Malaysia in 2002: closure of the few hotels built on Sipadan itself in 2004; introduction of a quota for divers and snorkelers (swimmers in flippers and snorkels) limited to 120 per day, and now increased to 176 per day [2019 info].

Today, most of the tourists-divers stay on Mabul, the neighboring island of Sipadan - where the accommodations, from the cheapest to the most chic, pile up around the village. Others make the day trip from Semporna, the port on the mainland in Borneo.

The only permanent residents of Sipadan are now military rangers and some lizards and not fierce lizards ...

In terms of safety, the tourists came back - and an impressive business developed around diving, in Mabul and Semporna.

From an environmental point of view, the underwater life on Sipadan Reef has remained spectacular! It's comforting, after my disappointment in Maratua and Sangalaki, Indonesian side of Borneo.

In Sipadan, each visitor must first land and sign the permit register before diving, swimming or strolling. Each boat receives a pennant for the day, identifying it as being allowed to sail around the island.

It is forbidden to circulate on the island beyond a perimeter restricted to the large beach near the pontoon and to the area set up for divers under the trees - with tables, wooden awnings and sanitary facilities. This is both to ensure the tranquility of the turtles that lay their eggs on the sand around the island, and to keep tourists within sight.

The atmosphere is more unusual than heavy. We return to the island between dives to eat, rest, take souvenir photos ...

On site, the military rangers, often in flip flops but with weapons at hand, monitor the comings and goings of tourists between two naps.

Sometimes the siren sounds when an intrepid or daze ventures beyond the limit. Better not to laugh with this, warn the guides before landing a group. An offense and it is the whole boat that finds itself not only expelled but prohibited from diving ...

(Thanks to one of my diving companions, Vicente Garcia, for the picture above, where I can be seen filming a coral shark! And the video that goes with it is here.)