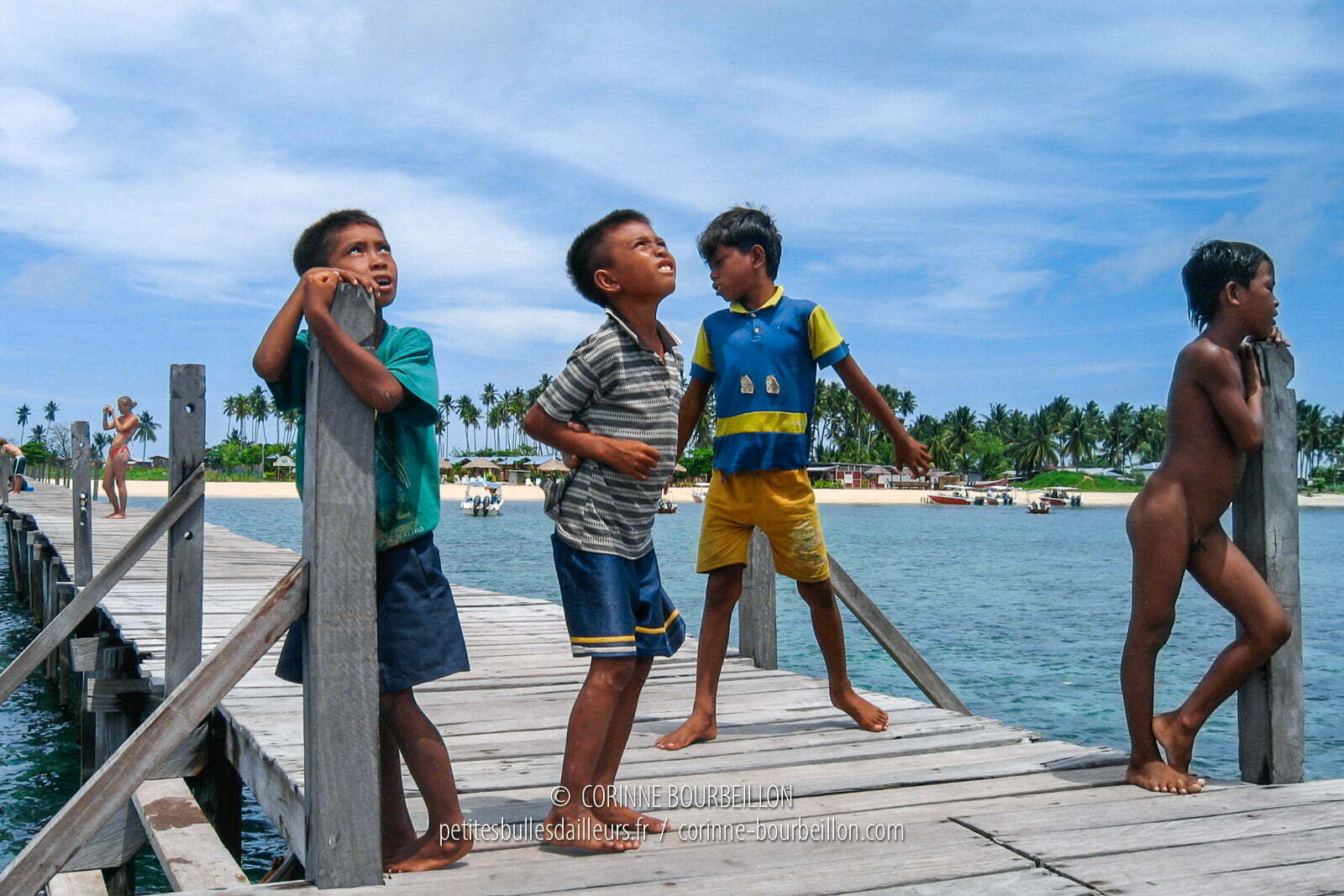 On the pontoon of Mabul, the little gypsies of the sea welcome divers. (Borneo, Malaysia. July 2006)

Gypsies of the sea and soldiers in arms

The islands around Sipadan are unknown and yet they are worth seeing. I dive there almost every day until the end of the week, waiting for my turn to go to Sipadan.

The main one, Mabul, is inhabited. Whole families of fishermen, more or less sedentary "sea gypsies", live there in wooden shacks on stilts, next to a luxurious resort for rich divers and longhouses rustic for low-budget divers.

The island is pretty, seen from the sea, but for this first time in the waters of Sipadan, I preferred to reside in Semporna, even if it means making the boat trip every morning.

Update : during my future trips to Borneo, in 2009 and in 2013, to dive in Sipadan, I will make a different choice, I will reside in Mabul to avoid this journey.

The port of Semporna is ugly, not very pleasant, I would not advise tourists looking for exotic postcards to stay there. But there is a semblance of modernity that I appreciate: internet access (although not very fast), electrical outlets to recharge the camera batteries, restaurants, hot water, market, etc..

Little annoyance in my quest for modernity: I receive SMS, but I can't send any. It's annoying, though... Hmm. I feel like a backpacker who's getting embourgeois!

During my many dives in Mabul, Sibuan and Mantabuan, I am not disappointed. The dive-masters are competent and know the funds as their pocket. I discover every day animals that I have never seen before.

Highly sought after frog-fishes aka frogfish (antennae), indolent and shapeless fish, disguise themselves as a sponge and wedge incognito between two stones, leaning on their fins which have become quasi-paws.

Crocodile fish, kings of camouflage too, merge with the sand. And, again, there is a truly incredible variety of nudibranchs ...

A treat for the amateur photographers of which I am a part. You can also meet the classic tropical underwater fauna: batfish, moray eels, angel fish, clowns, parrots, etc. etc.

Between two dives, we decompress on the sand, time to eliminate the nitrogen accumulated in the body and regain some strength.

On each island, there are soldiers, who control the waybills of the boats, the names and the number of the divers. Security measures put in place by the Malaysian government since the hostage taking in 2000 by the Philippine terrorist group Abu Sayyaf (the divers detained on the island of Jolo had been kidnapped in Sipadan).

It’s a little funny, all the same, when we land on these cute white postcard beaches with their coconut palms, to see guys in lattice arriving, some armed with an impressive machine gun, as a welcoming committee .

Bikini divers are the main attraction of the day for them... And of course the French are entitled to a little ironic football commentary. Thanks Zidane!