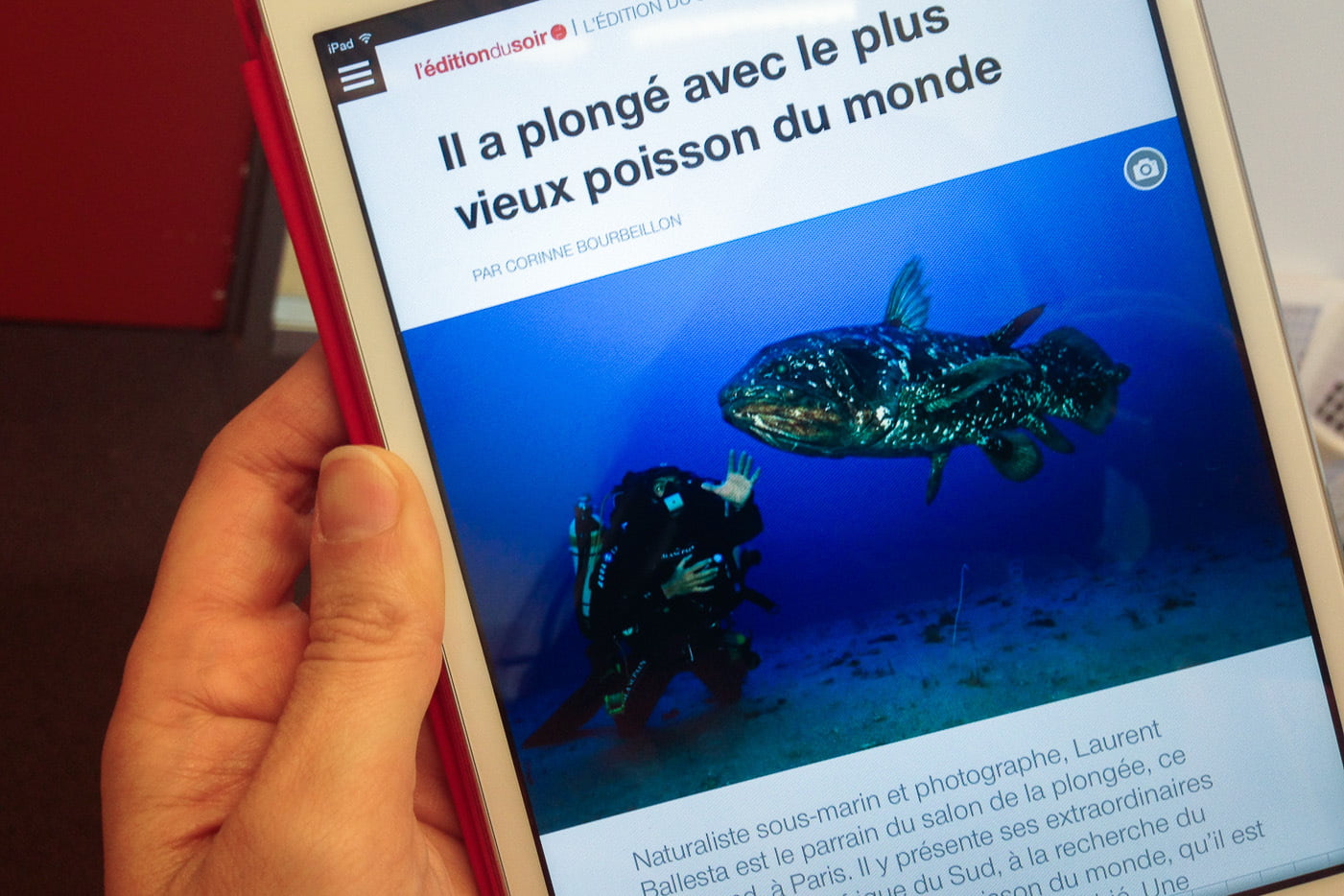 My interview with Laurent Ballesta appeared in the evening edition of Ouest-France.

I won't be at the dive show this weekend. But I had the pleasure to interview the godfather of this 2014 edition, the underwater photographer and naturalist Laurent Ballesta.

He went diving with the oldest fish in the world...

I rarely mix up my personal posts on this blog and my job as a journalist at Ouest-France. Except when the theme of one of my articles for the paper has something to do with... diving!

After my meeting with François Sarano and Jacques Perrin at the beginning of 2010 for the release of the film Oceansthis time I had the pleasure of interviewing the naturalist diver and photographer... Laurent Ballesta .

The article appeared this Friday, April 10, 2014 in the digital evening editionthe new digital newspaper launched by Ouest-Francewhich I work for. This article is unfortunately no longer available online, but I have made a PDF version of it, which you can read by clicking on the link or image below :

The man who photographed the coelacanths

Laurent Ballesta is the man who photographed the mythical coelacanththe oldest fish in the world. It was in South Africa, in 2010 and 2013, during dives at a depth of 120 meters.

He has just published a book, with a preface by Nicolas Hulot (his former partner in the TV shows Ushuaïa), on his extraordinary expeditions. It is entitled Gombessa: meeting with the coelacant, from the local name of the famous fish. A film will also be broadcast on Arte in May 2014.

Laurent Ballesta will be present this weekend at the Salon de la plongée 2014, at the Parc-Expo of the Porte de Versailles in Paris. On the program: exhibition, signing sessions, conferences (Saturday at 4pm and Sunday at 2pm). If you are there, these are really moments not to be missed...

Biologist and photographer, this specialist of deep rebreather dives talks about his quest for the coelacanth with a communicative passion: "These are the most complicated dives of my life, the most committed, the most difficult, he confided to me in the interview I did with him. You live 30 incredible minutes with the animal, in 120-150 meters of water, and those minutes are worth an eternity..."

An eternity that is costly... He and the other divers in the team still have to endure 4 and a half hours of decompression before they can return to the surface.

Below is an excerpt from the Gombessa I expedition documentary, later posted on YouTube:

Laurent Ballesta: "A narrative between natural history and lived history".

Laurent Ballesta didn't want to settle for publishing a beautiful book of photos on the adventure of the Gombessa project. So he decided to write in the first person.

"I consider myself a wildlife photographer, but I wanted to accompany my images with a story, like a long journey, he told me. Coelacanth is a very personal dream that I have had in my heart for so many years... I have tried to find a balance between the insipid and the shameless, between natural history and lived history. »

I haven't read the book yet, but our conversation made me want to dive into it !!!

Apart from that, guess where Laurent Ballesta is going to dive soon? À Raja Ampat !!! I even think there's still a few places left on one of the two photo cruises organised with him at the end of January - beginning of February 2014…

2015 Update: Laurent Ballesta made this cruise to Raja Ampat on board the well-named Waowa magnificent ship that I too was fortunate enough to discover...a little more than a year after this article was posted online... 😉