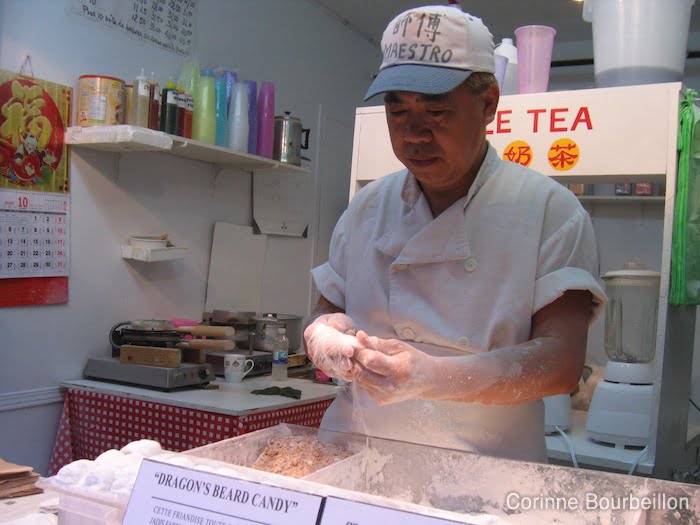 A little bit of Asia in Montreal: it's the Chinatown neighborhood that I offer you a glimpse of, through two short videos.

These are two very similar montages, because I wanted to test the video function of my iPod Nano and compare with that of my small digital camera.

Here is the first sequence, shot with the new iPod Nano.

Here is the second sequence, shot with my antique Canon Powershot A95.


Filming with an iPod Nano: bof

Frankly, the picture quality is better with my little camera, I think. It was a little gray, and the tiny sensor of the Nano seems to me to have trouble managing the lack of light, even more than my Canon Powershot A95, which is nothing extraordinary. I find the rendering of the Nano a little greenish.

The Nano is so small, it's hard not to move. Fixed shots are still shaking a little.

Another thing I noticed: the Nano, despite its tiny size, is less discreet. Curiously, people weren't paying too much attention to my ordinary little APN (it's a trick, people think I'm taking pictures while I'm filming, hey! hey!). With the iPod Nano, they felt like they were being filmed and tried to avoid the lens more often.

Other than that, Chinatown did not impress me. In terms of neighborhood, Montreal's Chinatown is restricted to two-three streets, the most popular being the pedestrian street of Montreal. the Gauchetière where I shot these two little movies.

In fact, there are many other street corners and neighbourhoods in central Montreal that deserve to be called "Chinatown", given the presence of the Asian community. I have seen many Chinese, Thai, Vietnamese, Indian restaurants, sushi and noodle vendors, mini-markets and other Asian fast-food outlets.

But in Chinatown, there's one guy you can't miss, if you like Asian sweets: the seller of candy with dragon beard (Dragon's beard candy), that we see on my videos.

These are sweets made with sugar, peanut, sesame seeds, coconut and chocolate ... And the famous dragon beard, these are the funny stringy thongs it covers all. Four dollars a box of six.

Obviously, it's a bit of an institution in the neighborhood. The small counter, where you can observe the candy making, is very popular with tourists.