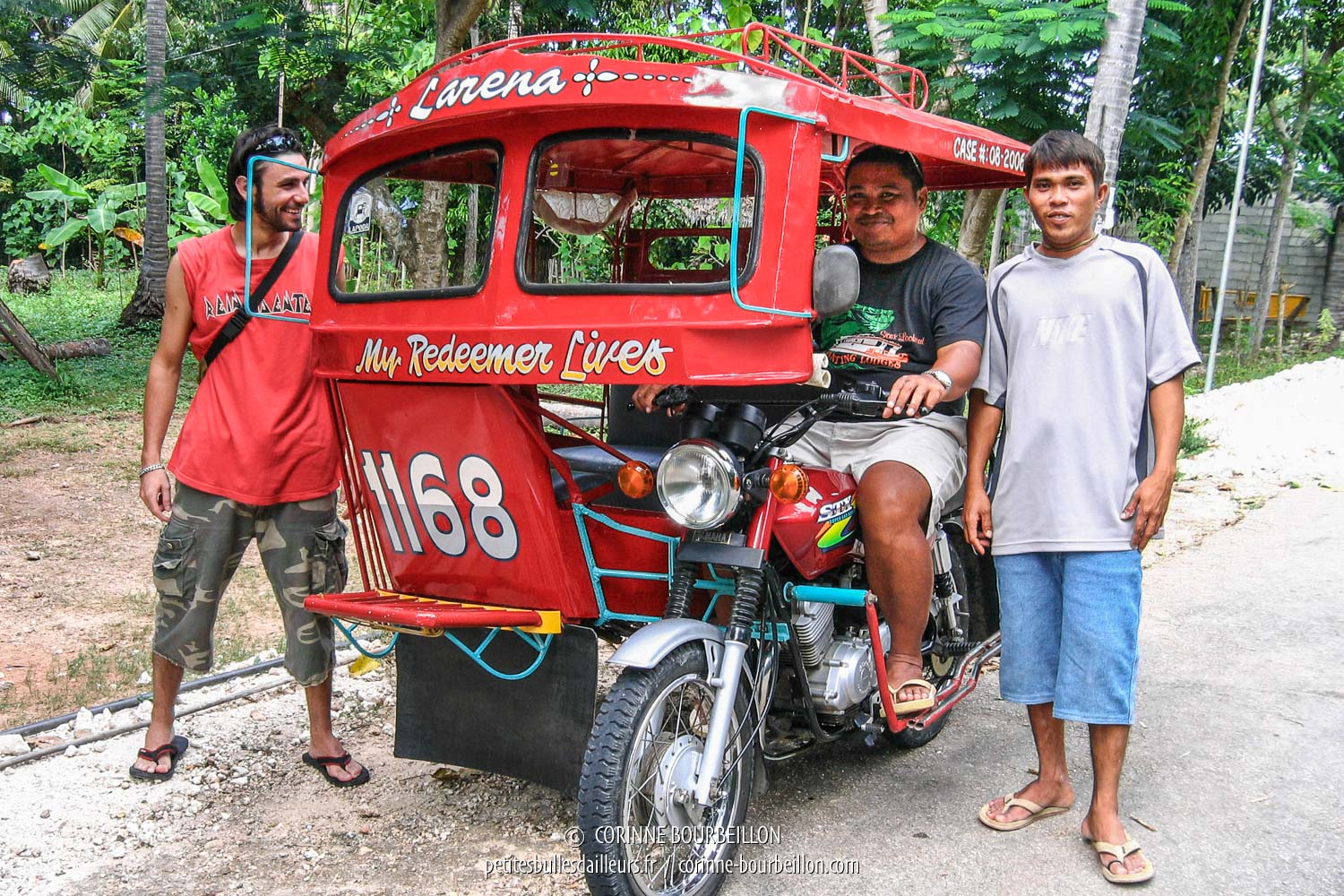 English is convenient to chat with your tricycle driver! (Philippines, Siquijor, February 2008)

What is convenient when traveling to the Philippines is that everyone speaks English. Fishermen and peasants, villagers and townspeople, children and adults ...

I was struck throughout this trip by the spontaneity with which people came to speak to me. And surprise the good level of English of most of my interlocutors.

English is the second official language of the country, with tagalog (language of the region of Manila) renamed filipino for the sake of national unity. English and Filipino allow us to understand each other in the archipelago, where we speak more than 70 other languages ... The most represented is the Visayan, language of the Visayas Islands, where I was.

Many Filipinos explained the same thing to me: children learn English at school, and classes are taught in English, hence the good general level. Filipinos are very proud of this. For expatriate candidates, speaking English is also a way to find work more easily.

English is part of everyday life. Posters on the walls, road signs, administrative documents, religious, legal or advertising messages are most often in English. Filipinos use English to count, especially when it comes to money. It is not uncommon in a conversation to suddenly hear, in a stream of unidentifiable words, a "one thousand pesos".

The Western traveler who has already been to Indonesia or Malaysia, also recognizes the famous "selamat" polite formulas. Tagalog is part of the Malayo-Polynesian family of languages, and the Arab and Chinese merchant ships of past centuries have also left their linguistic imprint.

And then there's all the vocabulary inherited from three centuries of Spanish colonization: butter is mantikilya, for example. I even once heard a girl pick up her phone saying "como estas" to his interlocutor ...

At Cebu Airport, while waiting for my return flight to France, I chatted with a lady on the ground, a former flight attendant, at the bar facing the check-in desks.

She obviously speaks perfect English and she immediately senses my little accent frenchy when I order. We exchange a few words, we sympathize ... I take the opportunity to address the issue of language. I tell him that it amuses me to identify words of Spanish in the filipino, and that English is a real comfort for traveling to the Philippines.

She then remade a short history course, explaining me that English has spread with the presence of the Americans (half a century of colonization, since the Spanish-American War of 1898) and then continued after the Second World War and the independence of the country. That Spanish was still practiced not so long ago, in the large families of the well-to-do, but only the elderly still speak it a little today. And that the general English level in the Philippines is falling, because teachers prefer to go to private schools where they are better paid.

The language participates in the change of scenery

For a passing tourist like me, being able to make people understand each other and talk to them in English is definitely a plus. But this "facility" has its downside.

How to say.... It takes some of the mystery out of it. The change of scenery is less complete. And I didn't even make the effort to learn two or three words in Tagalog or Visayan, since everyone greeted me and approached me in English. It's a pity, isn't it?

I promised myself to come back. Take the time to better discover the country, to return to explore the fabulous seabed. Next time, I will put myself more seriously to the language.

Even to learn the basic phrases, to present me as it should, when the inevitable litany of questions arrives, always the same. Where I come from, where I'm going, and if it's the first time in the country, and how long I stay, and if I travel alone, etc. etc. Questions that are as much curiosity as politeness ...

But it creates a slightly different, often warmer relationship when you are able to respond in a language other than English!