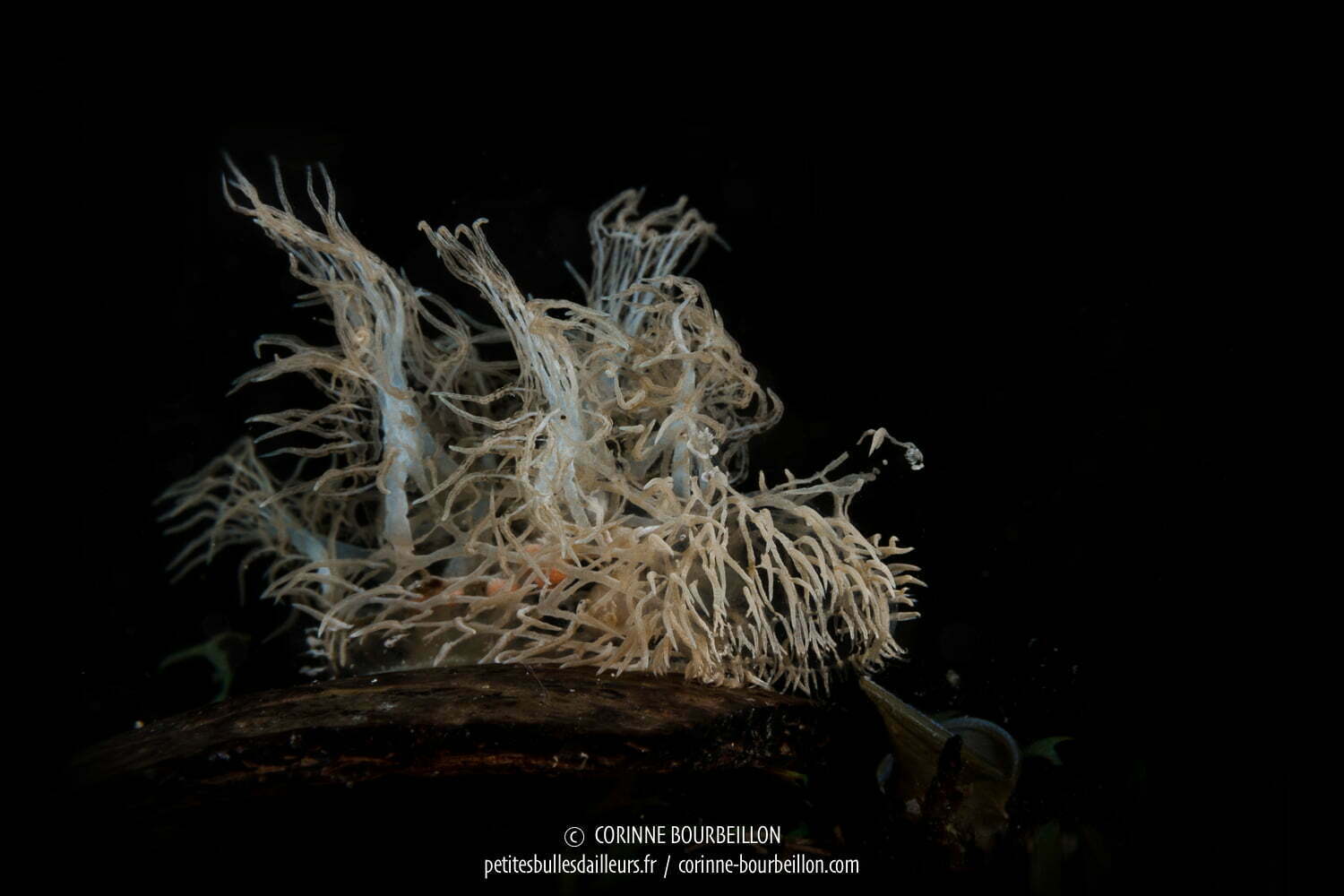 His name: Melibe colemani. This little sea animal is the star of Romblon, Philippines. Divers are ready to travel thousands of miles to admire this strange sea slug!

March 2017. I am on the island of Romblon, in the Philippines. "Here we have the Holy Grail of nudibranchs", announces proudly Philipp, of the diving centre The Three P.

The grail of nudibranchs? Definitely? What's so special about it? "It's a recently discovered nudibranch, very hard to find and really amazing. But you have to see for yourself. You know, we have divers from all over the world coming here just to photograph it. Her name is Melibe colemani. Tell the guide you want to see some, he'll show you some... "

And it's true, you have to see it to believe it... This sea slug is translucent! You can see its organs through it! 😮

It's not the only weirdness. Its body is made up of a network of tubes, of a whitish beige colour, which are in fact digestive glands. On his back, they extend into imposing growths, called cerata.

I admit I didn't know any of this until I saw my first Melibe colemani... 😍 Besides, even when I have it in front of me the first time, I can't see anything!

Joseph alias "Erap", my Filipino guide, however, insistently points at me, pointing two fingers towards his eyes and then his index finger towards a tuft of soft coral. Seeing that I can't see anything, he makes a circle with the tip of his pointer over the polyps, where I'm supposed to be looking, then gently spreads the "stems" that undulate in the current. But I still don't see anything. Nothing at all. In fact, I don't even know what the thing I'm supposed to see looks like.

I need a little more time to locate the front and back of the beast, which must be within 4-5 centimetres. Plus, it's running, that nudibranch. Every time the swell moves, it also undulates, moves forward, straightens up, raises its head... Is that its head? Wow... I'm hallucinating.

His mouth is like a reticle, a mini-net that is capable of capturing tiny and invisible prey, I guess, that it only has to digest. It's a gelatinous monster. A multiform slug. A ghost nudibranch.

Besides, there isn't just one... Joseph draws my attention to his little translucent comrades. Underwater, there are nudibranch corners, just like there are mushroom corners in the forest! 😂

Without the eye of my guide and his knowledge of the site (I mentioned in a previous article on muck-dive), I would never have managed to observe and photograph this wonder of nature ... Melibe colemani is so light, so vaporous, that it must be approached with infinite precautions. Because a simple movement of the hand over the little beast is enough to create a current able to lift it from the substrate and float it in full water. It does not look like anything anymore, then. It would be easily confused with a vague spongy debris washed away by the current.

During this dive - and a few others the following days, where I will ask again to see the Melibe colemani - So I spend a very long time stuck on the spot, to observe and photograph the tiny and fascinating animal. A game of patience ...

The Melibe colemani is a nudibranch filterer who was named after the man who discovered him, the Australian naturalist and photographer Neville Coleman (1938-2012). A find made at Mabul, the neighboring island of Sipadanin Malaysia, near Borneo: Coleman published the very first image of it in 2008, in its Nudibranchs Encyclopedia.

I really like his account of the dive during which he saw and photographed for the first time this curious creature, hitherto unknown to scientists. It also took him a long time to really see what he had in front of him... The story is told here on this American site of enthusiasts:

The nomenclature and scientific description of the species were only established in 2012 (one month after Coleman's death) by two marine biologists specializing in nudibranchs, the Spanish Marta Pola and the American Terrence Gosliner. For science buffs, here are two links to their study:

→ An extract from the study here
→ A PDF download here

(Coincidence: I discovered while consulting the Facebook page of The Three P diving center, that Terrence Gosliner also spent a week in Romblon recently, in April 2017, for his scientific research)!

In addition to Mabul in Malaysia, Melibe colemani has also been observed in Indonesia Komodo and Lembeh. In the Philippines, Romblon, divers at The Three P Center spotted it for the first time in 2013.

The species is probably widespread in the waters of the Coral Triangle. But this nudibranch is so hard to see, that it is not surprising that it was discovered only recently. Especially coveted by the divers photographers macro, it is considered a rarity. The advantage in Romblon is that the guides know where to find them.

In any case, for me, under water, it's ecstasy. The Melibe colemani doesn't look like any nudibranchs I've encountered so far. It's something new and strange. What an extraordinary creature! The Grail. I've heard it said...