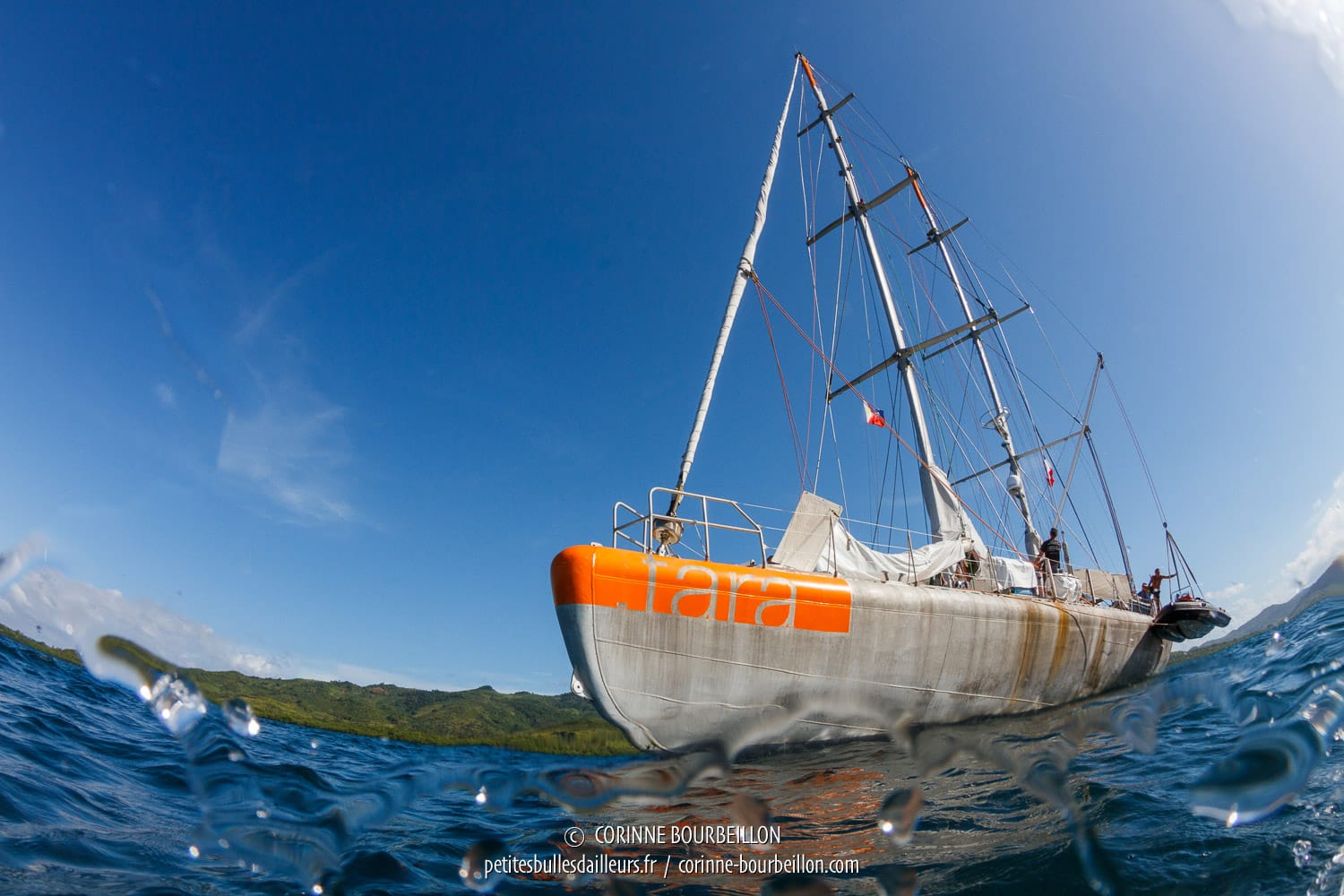 Coral mission in the Philippines with Tara and the Sulubaaï Foundation

Tara. Two syllables that roll from one side to the other... This is the name of an extraordinary boat, an oceanographic sailboat that will be sailing the waters of the Pacific in early 2018. On board, passionate sailors and researchers are trying to unlock the secrets of the coral reefs.

Launched in 2016, this expedition, named Tara PacificThe project will be completed in the fall of 2018. With my reporter's cap on, I was fortunate enough to be able to embark with a team of scientists and spend a week on board with them for a story in February 2018.

I took a flight to the Philippines, where I joined them near Palawan, in the waters of the small island of Pangatalan. In the heart of Shark Fin Bay, we discovered the coral reef restoration work being done by the Sulubaai Foundationcreated by a French couple, before crossing the China Sea to Vietnam aboard the Tara...an unforgettable adventure.

My 2018 articles on Tara and the Sulubaai Foundation

Upon my return, I wrote a series of articles in Ouest-France, the newspaper I work forwhich were released in February and March 2018. I have also published a long-format report in the magazine n ° 15 Dive! (May-June 2018) which has just been released on newsstands.

Here are the links to all these articles published in 2018:

→ They bought an island to save the coral
(the evening edition of Ouest-France, March 15, 2018)

→ Tara Pacific, an extraordinary expedition for coral
(Magazine Dive! No. 15May-June 2018, on newsstands or in digital format).

To discover above, my report for the magazine Dive! Eight pages in issue 15 of May-June 2018.

Sulubaai: they bought an island to save the coral

Frédéric Tardieu summed up the birth of his environmental project in Pangatalan, which was to become the Sulubaai Foundation : "At the beginning, we had the dream of erasing the damage caused by man on this island. Today it has become a struggle, to make this tiny place on Earth a lung of biodiversity. "

Originally from Marseille, he and his wife Chris created this foundation in the Philippines in 2012, one year after they set their sights on the small island of Pangatalan, near Palawan. At an age when others are beginning to think about retirement, the couple left everything in France to devote themselves to the restoration of the island, whose reef and vegetation were devastated.

In 2016, the Tardieu family and the Sulubaai Foundation team succeeded in transforming an area of about 40 hectares around the island into a maritime protected area (MPA), where fishing is prohibited. They have reconstructed an artificial reef with coral cuttings. They have surrounded themselves with marine biologists, hosted scientific missions, and raised awareness among the inhabitants of the villages of Shark Fin Bay about the protection of mangroves and the coastline, both on land and underwater...

I tell the whole story in an article published on March 15, 2018 in the digital evening edition ofOuest-FranceI'll give you the link here:

➜ They bought an island to save the coral

Below are some photos brought back from my 2018 stay in Pangatalan :

Discover below, in addition, the video report on Pangatalan and the Sulubaai Foundation, made during our stopover by my sister Noëlie Pansiot, correspondent on board for Tara :

2020: return to Pangatalan for the Sea Academy project

UPDATE, SEPTEMBER 2020. Two years after the story I mentioned above, I returned to Pangatalan in March 2020, just before the borders closed due to the Covid-19 pandemic. I was able to dive around the island again in the Shark Fin Bay and talk with Frédéric Tardieu about the current and future missions of the Sulubaaï Foundation, including the new Sea Academy projectwhich is scheduled to last for three years until 2024.

Objective: to develop several small MPAs (marine protected areas) on a human scale, to restore the coral and mangroves and, above all, to bring back the fish thanks to innovative methods...

In September 2020, the French Global Environment Facility (FFEM) has officially validated its financial support for the Sea Academy project. This news has allowed me to devote a new article in the digital evening edition ofOuest-France to this wonderful initiative, which brings hope to marine ecosystems. The link is here:

More about the Sulubaai Foundation

UPDATE, MAY 2019. I also invite you to listen this May 22, 2019 episode of the excellent podcast On the roads of Asia by Romain Lazzarotto, who gives the floor to Fred Tardieu (player below). He tells with an infectious enthusiasm the incredible adventure in which he and his wife Chris embarked, helped by the young diver and marine biologist Thomas Pavy, to transform the island and obtain the status of marine protected area (MPA) around Pangatalan:

UPDATE, FEBRUARY 2020. The 20 Hours TF1 broadcasted, on Sunday February 16, 2020, a report on Pangatalan and the ongoing environmental missions promoted by the Sulubaaï Foundation, in particular the repopulation of the reefs thanks to fish post-larvae. I put you below the video of the report published on Facebook by the company ECOCEANbased in Montpellier and specialized in this field:

UPDATE, MARCH 2021. Three years after my first report in Pangatalan, Paris-Match devoted a report to Fred Tardieu and the Sulubaai Foundation, followed by a column in partnership on Europe 1. I put below the short video of Paris-Match A social networking site (with a few photos taken by me in it), where Fred Tardieu sums up everything that has been accomplished on the island since his arrival:

Other images of the adventure

This fantastic experience of February 2018 in the Philippines took me a little further, as far as Vietnam. Because after the stopover in Pangatalan, the schooner Tara crossed the South China Sea earlier than planned and I stayed on board... which was not on the programme initially!

I discovered what it was like to spend several days on the high seas, on a round-hulled sailing boat, when you are not used to sailing at all. I never thought I was prone to seasickness, but I became very humble again when faced with the waters of the open sea...

And I now have a boundless admiration for the sailors and scientists on board who experience this kind of pitching on a daily basis, or almost daily, because it is their job. Maybe I'll tell you about it one day...