I remain under the spell of PemuteranI left Monday for Amed. Almost a whole week spent diving and lounging. And I did a great job of taping here until the end of the weekend. This allowed me to attend dance rehearsals and preparations for a wedding ceremony ...

Under the spell of Pemuteran 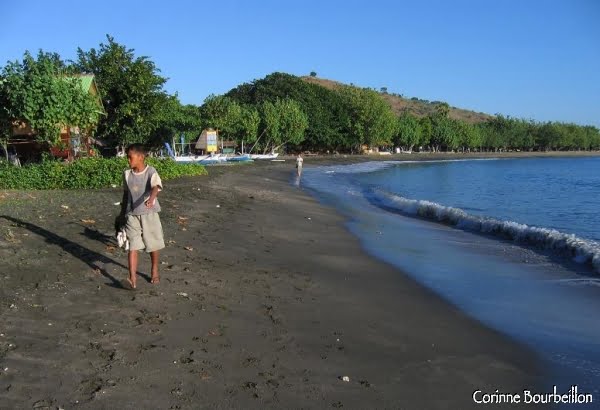 I take away from Pemuteran the memory of superb underwater depths and radiant smiles. The welcome of the people here is simple and warm. Far, very far from the tourist-commercial harassment of Kuta or Lovina.

A parenthesis apart, during this Balinese stay. Absolute relaxation. With a serious question at bedtime: which swimsuit will I wear today?

The little dancers of Reef Seen

The diving center Reef Seen hosts and organizes, on Saturday and Sunday, dance classes for children. Many little girls, some little boys, and teenage girls.

Around 2:30-3:00 pm, the tables and chairs of the divers' debriefing bar are pushed out of the way, which is then transformed into a dance floor for the kids' bare feet.

And it is a spectacle infinitely graceful, touching, to see them, more or less applied, trying to imitate the traditional dance gestures of the teacher. 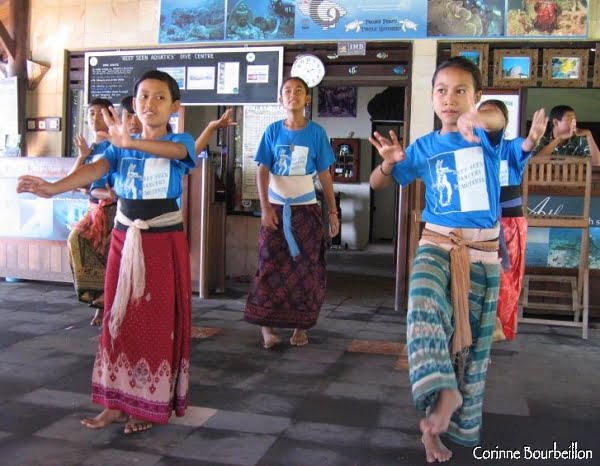 The small hips of the girls, encircled in the sarongs, somehow follow the rhythm of the gamelan, these traditional Balinese percussions, recorded on a CD. You must also roll your eyes, swing the head from left to right, and push the delicacy of each gesture to the fingertips, the precision of each step to the end of the toes. 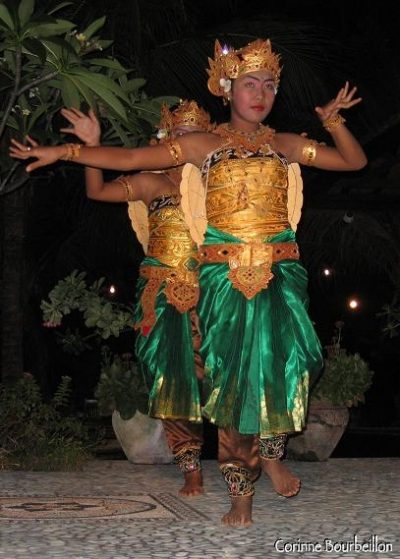 I found myself in front of these girls. Saturday night, the most gifted make the spectacle for the tourists of the hotel Pondok Sari, or another resort near. Reef Seen serves as backstage.

It's a change from the shows I usually cover in real life when I'm working... 😀 Here, no need for accreditation or photo passes to go backstage and watch the little ones getting dressed up in front of the ice, with a lot of makeup and hairpieces.

The final show, with the famous turtle dance, choregraphy created by Reef Seen please, is very kitsch, with satin and golden costumes.

I applauded to break it up, to warm up the room and encourage the little artists. Luckily, no hot "Vu" to write in the back for the next day's paper... It's a change from my job !!!

Traditional wedding at the neighbors

On Sunday, I was invited to drink tea and eat cupcakes at my neighbour's place, the family who runs the mini-market just behind the bungalows of the diving center. Reason: the marriage of the son, with a daughter from the village next door. I was made to sit at a long table in the backyard, with a bunch of other people, dressed in Sunday clothes, I mean in traditional sarong and turban.

It had been several days since I noticed the preparations, going past their house to go to warung (resto) opposite who also internet center. Decoration of the entrance with a fake cardboard door-paste Balinese temple, flowers, hangings ... 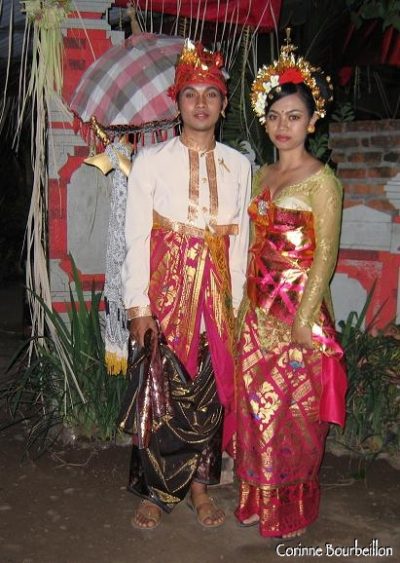 Actually, I missed the real wedding day, which was Monday, the day I left. The party I went to was a festive one, where family, friends and neighbours are invited to drink and eat. The next day, the day of the official ceremony, it is more serious: we dress in white or yellow, we pray.

The marries were there, welcoming everyone to the entrance. They gently took the pose, a little fuzzy, in their sumptuous and kitschy costumes. In the yard opposite, the hour of dinner approaching, men have gathered little by little, to eat and drink between them, something other than tea, in my opinion ... No less than three pigs must be killed for the festivities. There was already one roasting on the spit.

I ran away after a while, after having a little chat with my table neighbors and nibbling on two cakes, delighted to have had a glimpse of these wedding preparations.