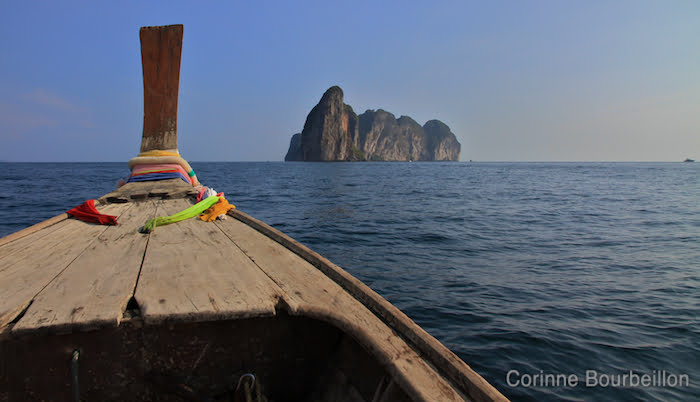 Koh Phi Phi (pronounced pi-pi), it's actually two islands. The largest, Koh Phi Phi Don, where we live. And the smallest, Koh Phi Phi Leh, uninhabited. Who, despite the cargoes of tourists to land there, looks like a treasure island, a movie island.

Let's get one thing straight: this isn't an "adventure," is it? All tourists worthy of the name do the walk in Phi Phi Leh (tourists of which we are obviously a part, my traveling girlfriend and I, which we fully assume during this mini Thai trip in 2011).

The excursion is not an expedition. In short or long version, in speedboat or long-tail boat, chartered or private, in the morning or afternoon, it is sold by all agencies, all hotels and guesthouses of the island ...

Still. I love this landscape of spectacular karst cliffs ...

When, after walking along the cliffs of Phi Phi Don, we see Phi Phi Leh approaching, in the axis of the bow of long-tail boat, we have the impression of discovering a mysterious island, inaccessible, lost in the ocean ... An illusion that I savor with delight.

So beautiful on the skyline

And then she's beautiful, Phi Phi Leh. Even from a distance. Before and after the trip, I never tire of photographing its unique silhouette, looming on the blue, from the beaches of Phi Phi Don.

Beaches not so crowded, too, contrary to what I feared. It's quite a nice surprise. Even on those that are accessible on foot from Tonsai, the tourist "village" of Koh Phi Phi Don, you can still find a lot of places to relax and take pictures without fear of crowds.

So yes, I'm glad I did it again, the ride to Koh Phi Phi Leh. To have bathed again in the emerald water of its coves and plagues dominated by stunning cliffs. To have been able to observe some fish, already, in palms-mask-snorkel. And to have taken full eyes, again.

The rock faces plunging almost steeply into the water are dizzying. Their sight always gives me the same euphoric feeling, a little exhilarating. I have seen and reviewed many times in previous trips, it is not a discovery. But I am pleased to see that I am not jaded. The sensation does not become dull.

Of course, we are not alone. Of course, we jump when a group of Asian tourists, a few meters away, starts to shriek from his speedboat at the moment of the souvenir photo. Of course, we find it a little ridiculous, to have to wade in the water all at the same time, in the same places, on the order of boatman.

"Now, swimming and snorkeling. Fifteen minutes. One, five. » He wouldn't want his pronunciation to get us confused between 15 minutes and 50 minutes. Now we'd be prolonging our water frolic! Other than that, he's not much of a talker or a cheerleader, our guy. Well, it's true that he works... And as a tourist walker, it can't be a crazy job every day.

Maya Bay, the beach neither secret nor deserted

The last stop before the sunset is Maya Bay, aka THE Beach.

Yes, it's the famous beach where the (bad) film was shot The beach, with Leonardo Di Caprio and Virginie Ledoyen.

Maya Bay is a beautiful white sand beach, at the bottom of a bay defended by impressive cliffs. A real movie beach, a Hollywood dream. Victim unfortunately of his success ...

This time, we are entitled to more than half an hour. So nice.

Okay, well, I had no illusions about what was waiting for us at the beach. It's confirmed: there are as many people in Maya Bay as there are during my last visit, in 2007. I had warned the other girl, so she was not too scared ... The crowd is dense on the tongue of sand flour, so soft underfoot.

Update 2022: Maya Bay, suffocated by overtourism, was closed in 2018 by the Thai authorities, to allow corals and the seabed to regenerate ... The explosion of tourism from China, in particular, which now represents nearly a third of visitors to Thailand, has not helped matters. Thailand was planning to reopen Maya Bay in 2021, it will finally be the 1er January 2022by limiting the number of people. To protect ecosystems, quotas are effective, we saw it in Sipadan in Malaysia. Rather a good initiative, then. Besides, two to three months after Maya Bay closed, the sharks came back: "We've gone from 5,000 tourists to about 60 sharks." sums up a Thai marine biologist, specialist of the issue, interviewed in a report for Correspondent on France 2. The association Ocean Quest has begun replanting coral "cuttings" in the area. by fixing them to the glue, with success.

Fortunately for my friend and me, we are at the end of the day and the speedboats come from Phuket start to leave. Soon remain only the long-tail boatswho one by one ends up leaving, too. The beach finds a semblance of calm.

It is in the shade, the setting sun only illuminates the cliffs at the entrance of the bay. It would probably have been better to come very early, at dawn, before the daily crowds. Another option: you can also camp at Maya Beach, which in principle allows you to enjoy it a little outside the busy hours.

At the end of the day, we find a more serene atmosphere, reminiscent of what was Maya Bay, before the movie The beach and the tourist frenzy.

When we leave, the Moon is already visible and the shaving sun gilds the cliff. Ultimate looks for a beautiful wooden sailboat that we cross the road ...

It is understood: Phi Phi Leh is neither a mysterious nor a secret island. But we can pretend it is, for the time of the crossing... before running into the other boats on the excursion!

And dream of the day, where, perhaps, Maya Bay will become as beautiful below the surface as above ...