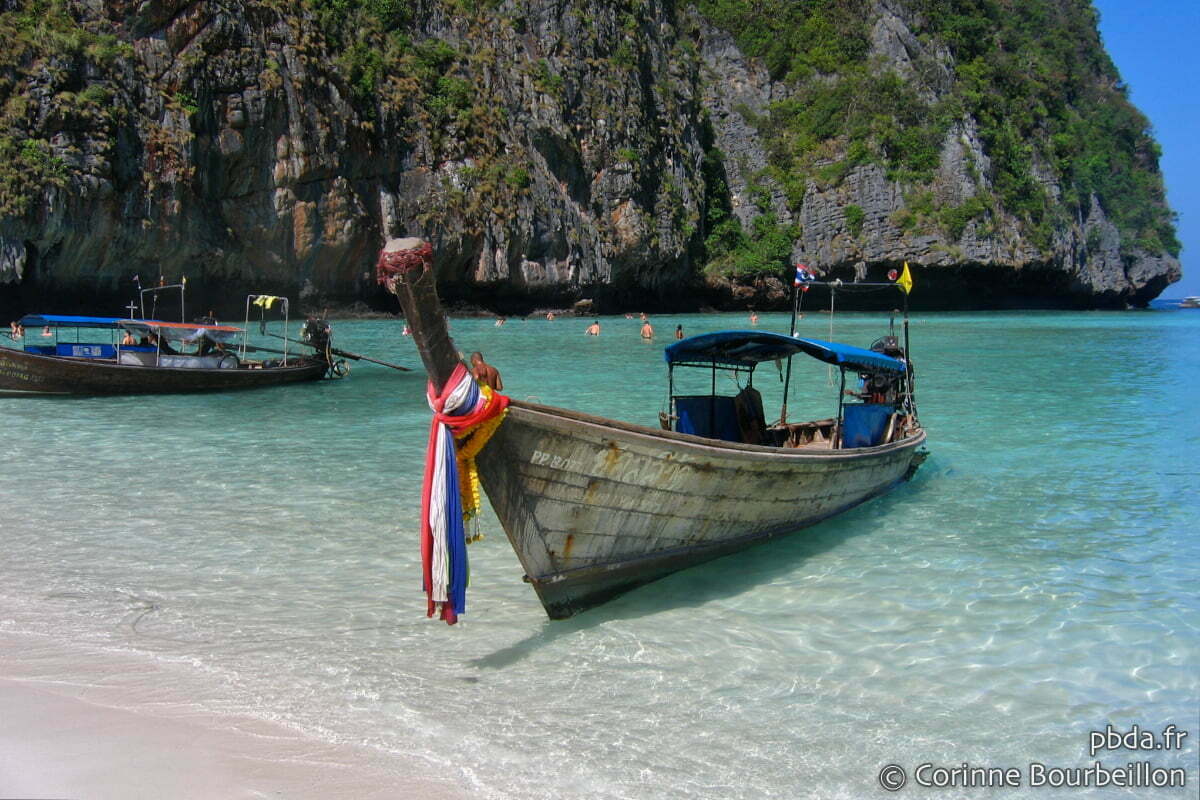 Maya Bay, the beach of The Beach and diving at Hin Islands

You saw the movie The beach with Leonardo Di Caprio and Virginie Ledoyen? Yes, it's there ... Maya Bay, on Koh Phi Phi Leh, in the south of Thailand.

Maya Bay, the beach neither deserted nor secret

Well, needless to say that once arrived on the island, it is not at all like in the film: the beach of Maya Bay is very easily accessible, and not at all deserted, especially in this month of January, it's the peak tourist season!

Update 2011: I returned to Koh Phi Phi four years later, in 2011 and unfortunately nothing has changed in Maya Bay. The place is certainly still beautiful, but tourism issue, it may be even worse than in 2007... See my new pictures in this post → Phi Phi Leh, the beautiful island

Update 2019: Maya Bay, suffocated by overtourism, was closed in 2018 by the Thai authorities, to allow corals and the seabed to regenerate ... The explosion of tourism from China, in particular, which now represents nearly a third of visitors to Thailand, has not helped matters. Thailand plans to reopen Maya Bay in 2021, limiting the number of people to 200 per day. To protect ecosystems, quotas are effective, we saw it in Sipadan in Malaysia. Rather a good initiative, so. In fact, two to three months after the closure of Maya Bay, the sharks returned: "We've gone from 5,000 tourists to about 60 sharks." sums up a Thai marine biologist, specialist of the issue, interviewed in a report for Correspondent on France 2. The association Ocean Quest started replanting coral "cuttings" in the area by fixing them to the glue, with success.

But hey ... It must be admitted, the white sand and turquoise waters (framing well to avoid having too many people in the photo) still have their effect! ! !

Day spent yesterday by boat to tour the nearby beaches and islands. At each stop, splash in the water with mask and snorkel or take a kayak tour!

Pure idleness of pure tourist, under a great sun. Life under Thai coconut trees is too hard! ????

Today, dives again, but this time on the famous sites of Hin Daeng and Hin Muangat one and a half hours speedboat from Koh Phi Phi.

We were hoping to see manta rays, which are visible around this season, but no luck. They did not deign to cross our path underwater ... Too bad! The underwater fauna also remains abundant and spectacular.

A big fat moray stoically supported the light of my flash for a tight portrait. The moray eels are very nice critters, finally, despite their patibular appearance ...