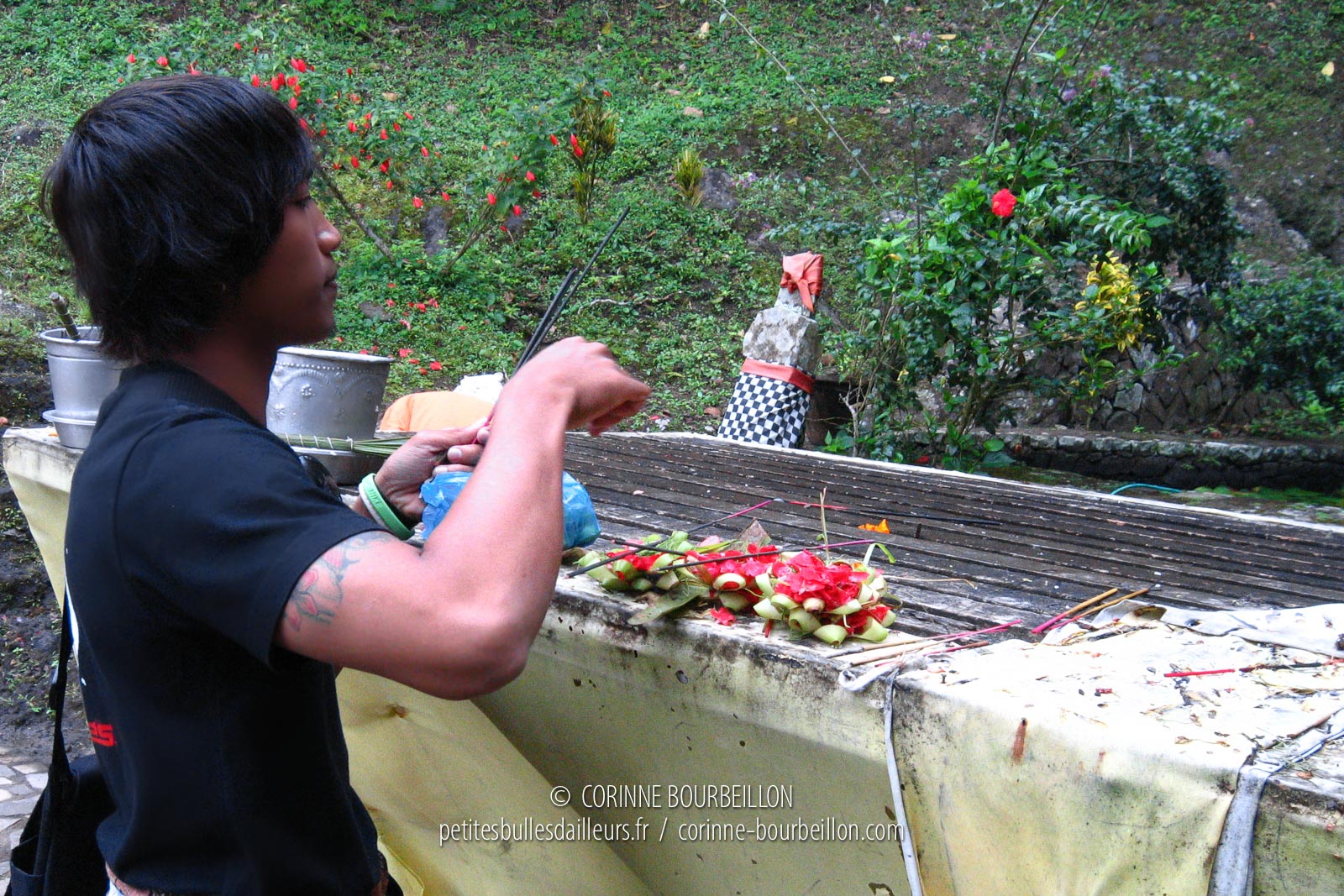 Offerings at the temple of Lempuyang. Amed and Amlapura region. (Bali, Indonesia, July 2008)

Sana, one of the young guys who work at the little hotel Wawa Wewe IIThe first time I was in Bali, I was asked to go for a motorcycle ride in the Amed region (north-east of Bali). On the program of this ride: rice fields, temples, markets and... cockfighting (yes, I went back to a gallinaceous arena, like in the Phillippines!).

So here we go, under a gray sky, to the heights. For the first time since my arrival, it is a little less beautiful. But it's not bad for driving.

It's amazing, just dig a few miles inland to find yourself in a greener, more humid area. With pretty rice terraces, bits of fresh and lush forest.

First small stop and detour, to begin with, on the road to Tulamben, to fill up at the petrol station (the litre of petrol, here, is at the moment at 6 000 IDR, or about 0.42 euro cents, which is huge for the Indonesians; they too have seen the prices at the pump soaring, there have even been big demonstrations in Jakarta because of the price of petrol, in short...).

Second small stop at the market of Culik (pronounce "Tchoulik") where I buy a sash-sash, to go with the sarong that I will have to wear to the temple. The people are very nice as always and laugh a lot when I draw my camera to point it at their stalls.

We stop first at Pura Lempuyang, actually made up of two temples, a little one with just a sacred pond and a big one with huge stairs adorned with dragons.

On a clear day, the view must be spectacular. Unfortunately, with all these clouds, difficult to appreciate the panorama at its true value.

We knot the sarongs. Then I imitate Sana, who buys offerings, and lights the sticks of incense.

Once seated in a suit in front of the altar, with our hands facing the sky, we must take a flower three times from another small offering basket at our feet, make a small circular gesture, then place the petals in our hair, then behind both ears. After that, pause, hands joined, for a prayer. Then we are sprinkled with holy water, by the priest on duty, all dressed in white.

We finish the prayer by having water poured on our hands, which we must drink or pretend to drink, three times, then sticking grains of rice on the forehead and the temples.

Even if it doesn't mean much to me, I really enjoyed this little time of prayer in this great, almost deserted temple. On the way, we met only Balinese in sarong, with their offerings. Not a single pale face.

Lunch and shopping in Amlapura

Lunch break at the marketAmlapura (26 000 Indonesian rupees for two, less than 2 €!). I also take this opportunity to change my euros at a better rate here, because it's the big city of the region. Here I am again a millionaire in rupees!

Small shopping stop at the market, then the big supermarket of the corner, Harry'swhere I'll spend a few tens of thousands of rupees (actually, 5 €) for a jacket and a pair of new flip-flops...

Sana takes the opportunity to pick up girls in the car park, with an unstoppable tactic: direct exchange of mobile phone numbers with the promise of SMS.

At the top of his 21 years old, my young guide explains to me in his approximate English that his friends are making fun of him because he got dumped by his previous chick... So he has to find another one, quickly!

The palace of Tirta Gangga

We hit the road again and then, a few kilometres away, visit the water palace of Ujung, built around 1920 by the last king of Karangasem.

There are few people, just a few Asian tourists and locals. It is an amazing building by the sea, in the middle of a large park with pretty lotus basins, soothing.

Then we stop at this other palace, not far from there, built by the same king, much more frequented and better known, the palace of Tirta Gangga (photo opposite).

I already knew him, having visited him during a previous stay in Bali. It's a bit of the must-see site in the area.

The place, certainly very touristy, is really pretty and rather pleasant. I am delighted to rediscover it. I particularly like the big pool filled with huge fish, which we cross by jumping from slab to slab.

Finally, Sana can hardly believe me when I tell her that Filipinos, like Balinese, really appreciate cockfights and organize lots of them. And they bet too? Yes, yes, yes!

Same scenario as in Siquijor, Philippines (read : The roosters are fighting on SundayFebruary 2008 article). All men around the small clay arena and everyone who gets excited at the time of the bets.

Sana put a few thousand rupees, which he will obviously lose ... He is disappointed. He thought that my presence would bring him luck.

Stroll along the coastal road

The next day, I leave to explore alone on my motorcycle (I say "motorcycle" because everyone calls it "motorcycle" because everyone calls it "motorcycle"). "motorbike" here, but it's actually the equivalent of a scooter) the beautiful little coastal road to the south. At each turn, from the top of a promontory, you discover a new cove of black sand, with its little boats lined up, and the sea as far as the eye can see... It's beautiful, it's beautiful!

I then wander far beyond the village of Aas, well past the scrap metal lighthouse, far down the road, somewhere between Seraya and Ujung.

Wherever I go, I am still the Queen of England, greeted and enthusiastically challenged by the locals. "Hello, mister! Hello, mister! » (In Indonesia they give "mister" to all foreigners, both men and women). I distribute small hand gestures to the right and left, as I know how to do so well, and I continue on my way.

Just before a rickety bridge, a vague imitation of the Kwaï river bridge, I choose the small road on the left: it goes down towards the "pantai"...on the beach, a guy says to me and I ask him for directions. And I discover there, below a tiny village full of goats, cows and children, a village where nobody speaks English, a beautiful, perfect beach. An arc of black sand, real sand, without any stones in it, surrounded by small cliffs.

There are the fishing boats, and a busy family emptying the nets, watching me curiously. The exchange will be limited, given the small extent of my Bahasa Indonesiathe Indonesian language. The teenager who puts the net in the big bag held by two small children speaks as bad English as I do Indonesian.

I take a long break on this beautiful beach, which is called Pantai Soan or Sohang, I don't know. I transcribe approximately the name given to me by the teenager of the fishing family... This beautiful beach, from where we can see both the islands of Lombok and the two Nusa (Lembongan and Penida), well, I can't even show it to you! I ran out of batteries!

The spare batteries I took were unloaded. And in the area, not a warung (small shop) had no batteries other than those damn local ABC batteries, not strong enough for my camera.

Never mind. If one day you follow me like this splendid little coastal road, fork off the yellow scrap bridge, follow the bad road with little speed, hurry to the children, do not crush the hens and stop at height a flight of steps on your right. It's here.

Updated on August 19, 2009 : discover pictures of this beautiful beach (Pantai Songean, his real name) in this article, posted one year later:
→ Bali: they found "my" beach again