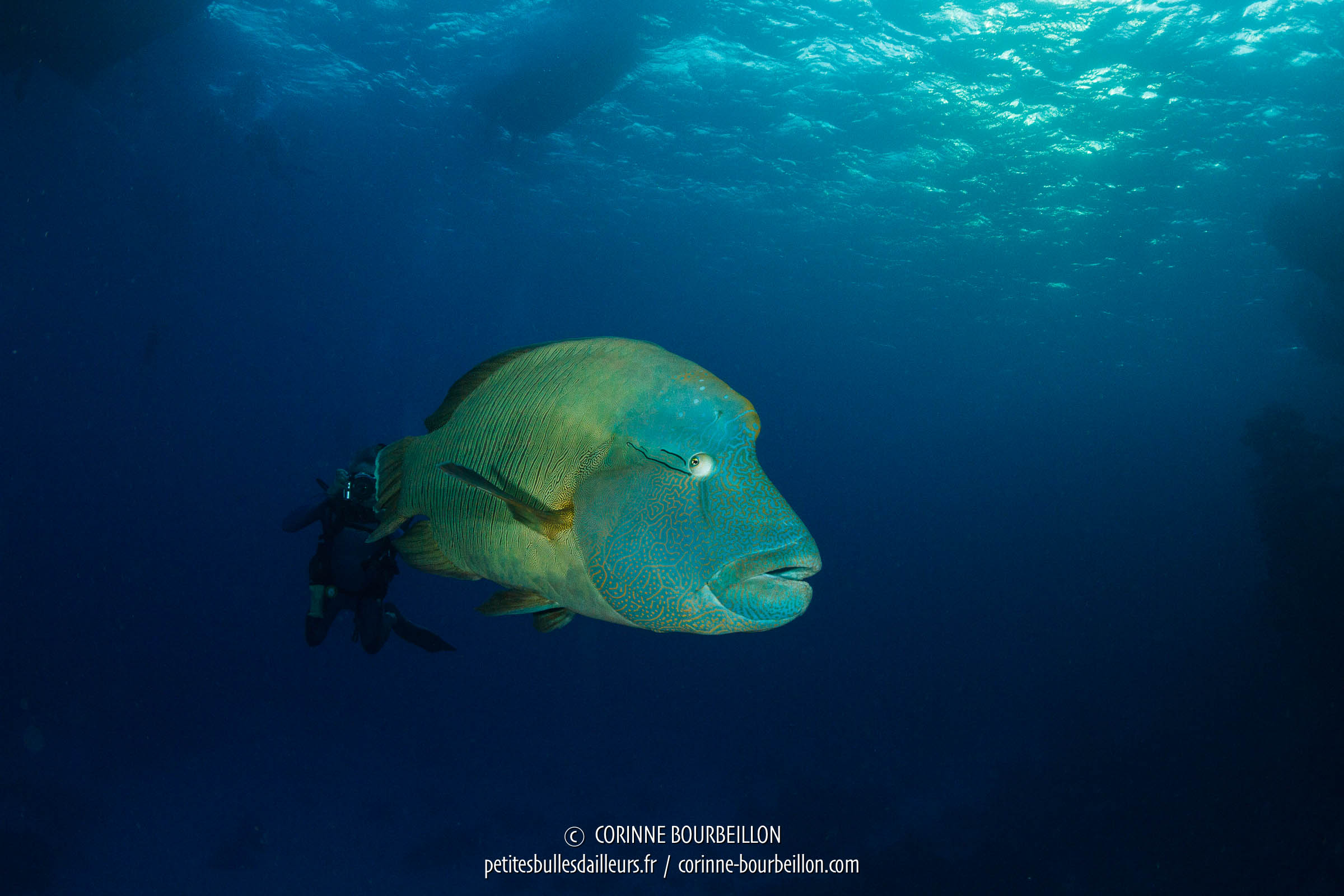 Fancy some big blue? Hop, in the water! I'll take you to the Red Sea for scuba diving, snorkeling and underwater photography...

Oops, I did it again

A year ago, I had accumulated some unusual experiences in the space of a week: I had not only met a mermaid, but also photographed sharks and explored wrecks too... It was in October 2016, in the Egyptian waters of the Red Sea, thanks to a special "three-in-one" diving cruise. The concept: to take on board scuba divers, freedivers and underwater photographers at the same time.

In this month of November 2017, I took off for Egypt and embarked on a new "snorkeling-photography" cruise in the Red Sea.

It was organized by the same people as last year: the Greek-Swiss underwater photographer Phil Simha, the French apnea champion Rémy Dubern and the Franco-Egyptian team of theExocet. This time the route was not to the north (Ras Mohammed, Brothers), but to the south (St. John's Reefs)…

On the program: a week of great blue and sunshine (O joy, just before entering the grey Breton winter 😎). Water at 27-28°C, with a vertiginous transparency. And then, above all, happiness and wonder beneath the surface. Of all the spectacles offered by nature, coral reefs are really the ones that fascinate me the most...

Those who don't dive don't realize it, but bringing together scuba divers, freedivers and underwater photographers on the same boat is not necessarily easy... With or without bubbles, once released into the water, these three "populations" of webbed humans don't have exactly the same morals.

Exploration fanatics sometimes curse the slowness of image hunters who hate to swim fast underwater. Photographers, on the other hand, grumble about those that appear in the frame or that frighten the fish. As for the freedivers, adepts of aquatic simplicity, they contemplate with an often sarcastic eye the cumbersome paraphernalia of the "bubbly" ... 😁

This clash of underwater cultures sometimes gives rise to amusing scenes. I let you admire below the ease of Rémy (yes, as I mentioned above, this boy is still a freediving champion), when it comes down to tease, in selfie mode, like GoPro, those who carry their air supply on their back instead of just their lungs:

Remy created his freediving school Blue Addiction in the Var (South of France) with his wife Audrey. They also organise training courses in Indonesia and Corsica. It is with him that I had learned to free dive in 2014. I have not practiced much since then, I admit, only when the opportunity arises, as in Komodo, in July 2016.

During this cruise to Egypt in November 2017, I will finally devote only one morning to snorkeling and every other day of the week to underwater photography! Yes, each time, I hesitate a little, and then each time I choose to immerse myself in a bottle... The fault lies with Jen and Julien, our two guides, who every morning give us a tempting briefing of the first site during the day.

As a result, the desire to photograph is the strongest: instead of chaining short dives on a single breath, I prefer to be able to spend an hour under the surface, in order to quietly explore the reef and take pictures! My buddy François, less addicted to photography, regularly alternates between the two: freediving in the morning, diving in the afternoon.

On the left: a tortoise has climbed up to meet the freedivers, to breathe on the surface. Right: Audrey goes down in apnea to say hello... (Red Sea, Egypt, November 2017)

Because there is one thing to know about this type of mixed cruise where you can chain up to three or even four dives per day: if you choose to start the day with a scuba dive, it will not be possible to snorkel afterwards. That's right! If it is possible to do freediving BEFORE a scuba dive without any problem, the opposite is not true.

To be able to practice both in the same day, you have to opt for apnea first. Security Question.

Why you shouldn't freedive after a scuba dive. I summarize by simplifying: while diving, underwater, we breathe compressed air (air is about 79% of nitrogen and 21% of oxygen). But the more the water pressure increases, the more the inhaled nitrogen dissolves in the body and accumulates (this is saturation). During scuba diving training, we learn that if the pressure drops suddenly (ascent too fast), the dissolved nitrogen becomes gaseous again and can then form dangerous bubbles in the body tissues... 😱 We also learn that it is eliminated only very slowly, by breathing (that's why divers make stops underwater on ascent and also surface intervals, to "desaturate" a little, simply by breathing, for a given period of time). To make apneas afterwards, even at shallow depths, would be like a series of sudden pressure variations, while holding one's breath... This would encourage the accumulation of microbubbles and their anarchic degassing in the body, which causes the diseases and accidents known as "decompression sickness" or "desaturation".…

All the interest of this thematic "three-in-one" cruise, in addition to the pleasure of getting into the water (with or without a bottle, with or without a camera), are the workshops and mini-training sessions that Rémy and Phil offer us every day. Initiation to relaxation techniques to improve your apnea, yoga and stretching sessions, classes on photo composition and underwater photography, discussions on how to approach sharks or marine mammals in a respectful manner, etc. etc.

Between meals and dives, before the evening aperitif or during the navigation periods, they share with us their knowledge, experience and give valuable tips, which we can put into practice the same day. ????

It's exciting and rewarding. It creates a nice atmosphere, a climate of benevolence and listening really nice, whatever the level of each. These exchanges also make it possible to get to know each other better and to create new affinities, as the week goes by, with other divers.

I do not know yet if there will be a third edition next year [EDIT: Phil, Rémy and Audrey have just confirmed that they are preparing something for 2018]. But during this second "snorkeling-dive-photo" expedition in the Red Sea, I am not the only "repeat offender" on board. Several divers, present on the 2016 cruise, came back, too!

All I want to do is put it back on. Who knows, one day I might even be able to do some snorkeling... But in the next post, I'll tell you why, on one particular site, I was very happy to have chosen the bubble camp! 😉 🦈