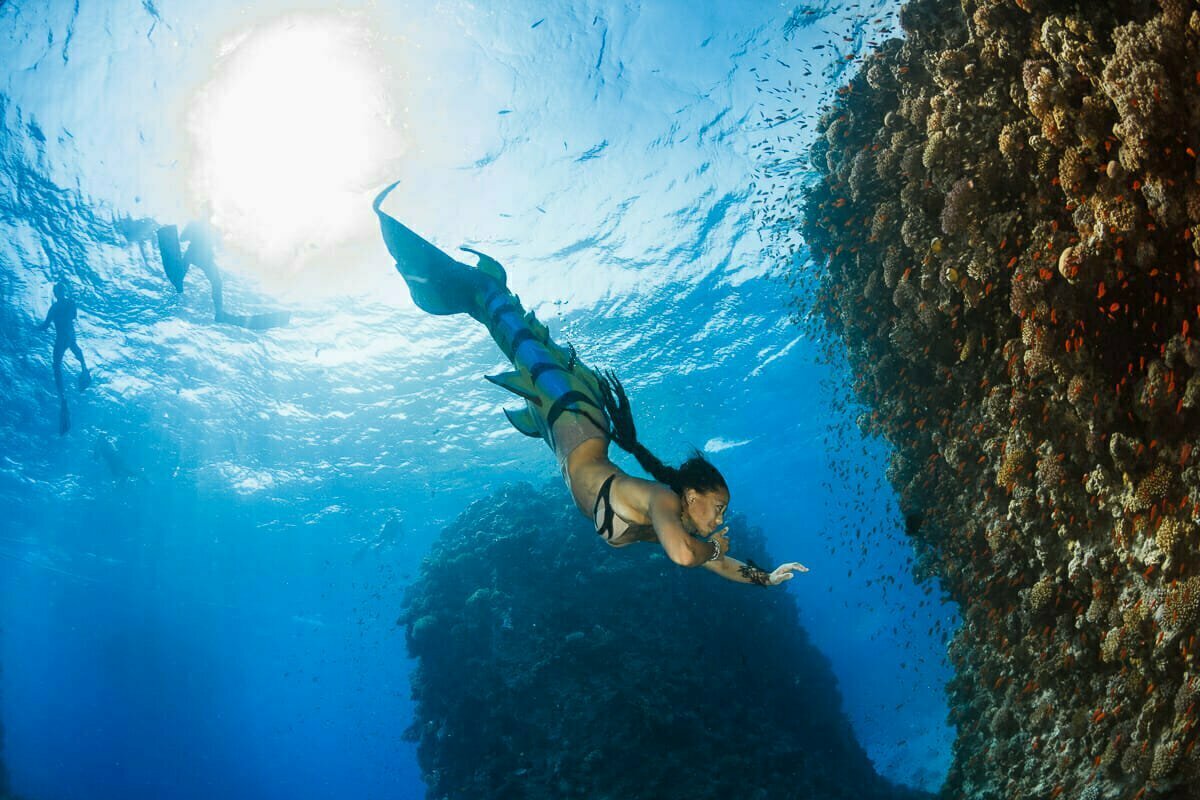 I met a mermaid

This is the first thing I notice when I step on the deck of the boat. A mermaid's tail, lying there, between two diving bags.

A mermaid tail on the bridge

I'm bending over to feel the object. It's soft and massive at the same time. The tail is yellow and blue, silicone, zebra-like and bristling with small fins. I lift the tail a little. It weighs. I'll learn later that the tail weighs 12 kg!

"You share your booth with Cindy, she owns the mermaid tail," teaches me. Phil Simhawho welcomes me aboard theExocet, moored in the Hurghada Marina, Egypt. Professional underwater photographer, diving and apnea instructor, he is the instigator of this week-long diving cruise in the Red Sea.

That's all he tells me. It's late, past midnight. My roommate, who came in earlier today, is already asleep. I struggle with the doorknob, sneak to my bunk as quietly as possible. I'd be remiss if I woke up a siren... ☺️ We'll get to know each other the next day!

Back to the Red Sea

Yes, it is. In this month of October 2016, here I am in Egypt for a "photo and snorkeling" themed diving cruise. With a mermaid on board, so. But I didn't know that when I made my reservation, at the last minute, learning that there was a last place available a few days before departure...

As for the rest, I knew just about what to expect: clear water at 28°C, only four-five hours' flight from Paris. The idea of being surrounded by photographer divers like me and the presence of freediver friends (Rémy and Audrey from Blue Addiction) have finished convincing me!

In addition, the Red Sea, I do not know very well. My only dives there, before this new trip, went back to November 2011 (It was also with photographers, those of Forum of the photo-sub).

I know, I'm very late in my stories, I have not finished telling my 2016 dives in Indonesia (Komodo and Raja Ampat in July, Triton Bay in March). The posts to come by the end of the year will be a mix of Red Sea and Indonesia, but so much the worse for the chronology! It's not every day you get the chance to photograph and film a mermaid underwater. I can't resist the pleasure to show you some pictures... 😉

Siren, it's a job

The mermaiding or sirenism, it is a new sporting leisure in vogue, and also a trade. Fun coincidence, my duck had just dedicated a beautiful portrait to a professional sirenten days before I met Cindy !

The sirenism, it is to evolve in apnea, the legs slipped in a tail of fish - gracefully, as to do. Cindy is Swiss, she is in her thirties and teaches mermaiding to adults and children in Neuchâtel (more info on his website Métisphère). She played the models in the Red Sea for us photographers. I'll let you discover what it's like, with the little video below:

It's really sporty, the mermaiding. Cindy's performances impressed me a lot. Immerse yourself several meters deep on a single inspiration, without a mask, eyes wide open, and waving gracefully with a silicone tail of 12 kilos while keeping the smile, it requires a hard training. Ariel can go get dressed.

How do you get into mermaidism? Out of passion. And a taste for challenge, too, I believe. Cindy has always loved water and is a top-level sportswoman: acrobatic rock, swimming, apnea... An engineer, she decided to change her life: "I wanted to devote myself to activities that corresponded more to my aspirations," she explains. She is now a naturopath, coach and mermaid! Quite a chick...

Unlike all of us on the boat, she had never breathed in a regulator (the thing that divers have in their mouths that makes bubbles): so she took advantage of the cruise to do her first scuba dive! And she even saw sharks. Disgusting, beginners' luck... 😁