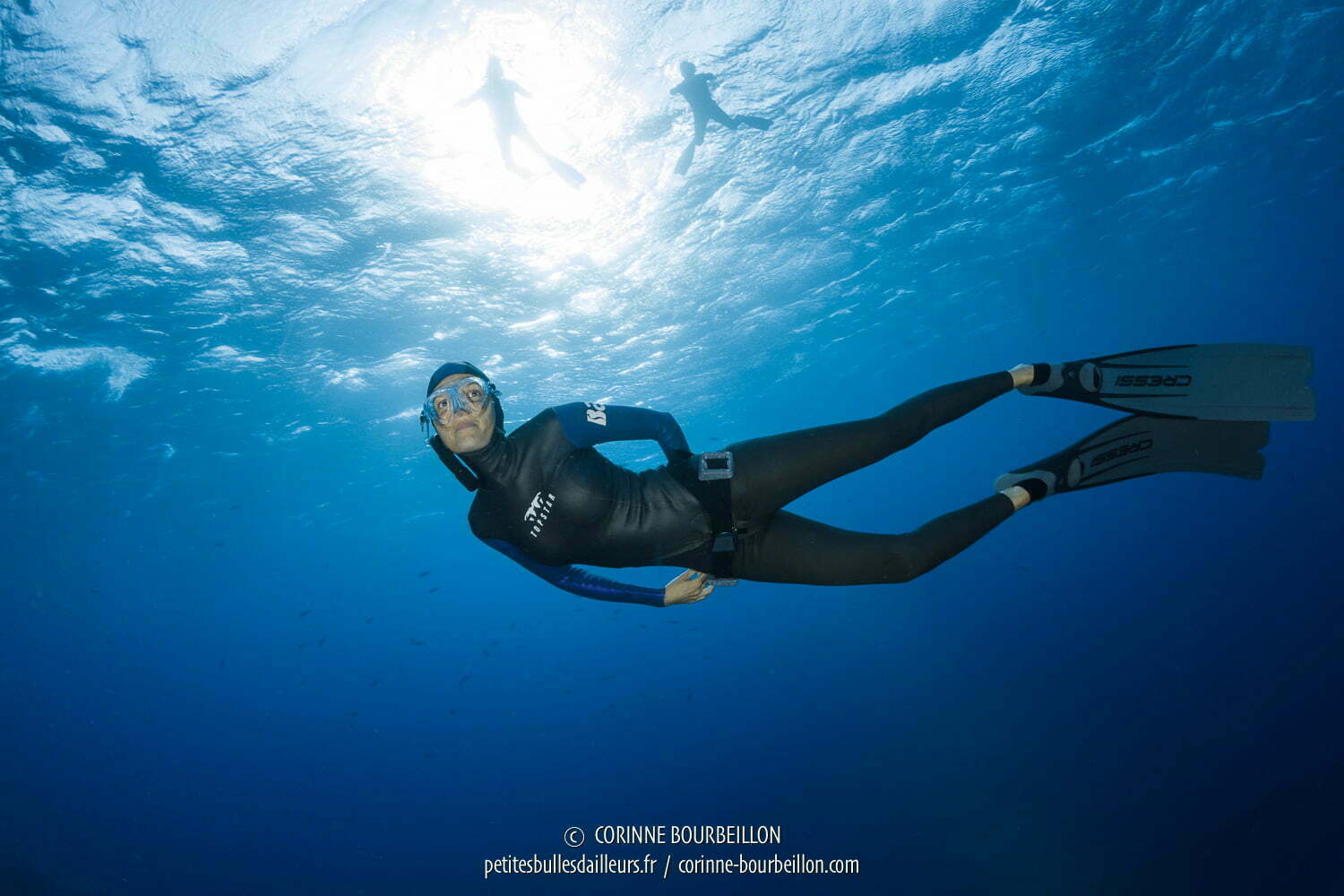 This year, I discovered feediving. First in Indonesia, then in the Mediterranean Sea. In English, we say "free diving", in other words "freedom underwater"... I love it!

Life is full of surprises. I, the scuba diver who loves to make bubbles, have learned to do something new and incredible: not using a regulator and not breathing underwater! And yes, this year, I started freediving!

In English, we call it free diving : in other words "freedom underwater". I like the expression, it's the freedom (and not the lack of air, as in French with the word "apnée" , apnea) which is highlighted. No more need for an air tank on your back!

The principle is to do as marine mammals do. The only air you take with you is the air you store in your lungs... 😀

At the beginning, I didn't think I could do freediving because I used to smoke. I also doubted that I had the physical strength to do it, given my lack of regular sports training. And even though I love water, I'm not good at swimming - swimming laps has never been my thing. So, anyway, I was convinced that freediving was not for me.

However, today I manage to go down to a depth of about ten meters (update 2018 : about 20 meters, now)...on a single breath... There's few things I've accomplished this year that I'm more proud of. I still can't believe it.

It all began in Indonesia in May 2014. I returned to Pulau Weh, a small island in the province of Banda Aceh, on the western tip of Sumatra. There I met a friend, Remy Dubern, whom I had met during a previous stay in Pulau Weh, four years earlier, in 2010. He was a scuba diving instructor at the time.

We kept in touch on Facebook. In the meantime, he took up freediving. And as he's the kind of guy who doesn't do things by halves when he's passionate about something, he pushed the experience very far... Up to the point of competition, up to winning gold, at the 2013 FFESSM French championship, with a descent in fins to -80 metres!

Freediving is now his life. In addition to competition, he has become a trainer and now teaches freediving to beginners as well as to more experienced divers (see his website Blue Addiction). With his partner Audrey, he regularly organises training courses in France and abroad.

So I took advantage of Remy's presence in Pulau Weh, to initiate myself to freediving with him, at Lumba Lumba dive shop on Gapang Beach, between two days of bubbles diving...

He is a great teacher, caring and very educational, who really gives you confidence and knows how to communicate his passion. I might not have dared to try freediving if he hadn't been able to talk to me about it as he did... A real motivator!

For the practical exercises, the first stage is dry. After a few simple yoga postures to relax the body and breathing exercises to learn how to fill up the rib cage, we lie down on deckchairs, relax as much as possible and try to hold our breath as long as possible...

It seemed unimaginable, but after a few tries, I managed to hold on for 2 minutes and 30 minutes!

Well, in the water, it's a different matter. There are other tricks to master: the ears to equalize, the finning to optimize, the stress to manage... There are several freedivers trainees following the course and we all manage, as the day goes by, to overcome our blockages, to make impressive progress, each one at his own level.

As I didn't bring my camera underwater for the sea sessions, here are some screenshots of the videos made with the GoPro by Rémy with Rimen and Mathieu, a couple of travellers who became friends and who discovered freediving like me during their stay in Pulau Weh.

I liked this initiation in Indonesia so much that I decided to do it again: even before the end of my stay in Pulau Weh, I signed up for one of the three-day Blue Addiction courses that Rémy had planned to organize in Hyères, in the south of France, this summer.

Update 2021. Remy made a video for the magazine Dive! in which he explains breathing techniques, useful for both freediving and scuba diving. I give it to you below:

Returning from my trip to Mexico, at the end of July, I went back on the road for a last week of holidays on the French Riviera, in Hyères, to take part in the Blue Addiction freediving course. This trip on the Var coastline was a first for me: I didn't know the area at all, which is a bit the cradle of diving in France...

I discovered the islands of Port-Cros and Porquerolles during our sea trips, under a radiant sun! Gorgeous! Of course, it's not Indonesia, and the water is definitely cooler, but the Mediterranean remains "exotic" for the Brittany native that I am...

From Pualu Weh to Hyères, I discovered another way to dive. And above all discovered that I was perfectly capable of it. At my (modest) level of course...

I like the parallel with the running that Rémy does during his training sessions: everyone is able to jog, to run for fun, at their own pace, no need to be a marathon runner. For freediving, it's the same: no need to be an athlete like in the Big Blue, it can be practised as a leisure training, in complete safety, it is an activity accessible to any normally constituted person.

Between my freediving initiation in Indonesia and this training course in the Mediterranean, I gained confidence. I learnt some little tricks, not very complicated, which allow me to hold my breath longer.

What is really incredible is the spectacular progress that everyone makes, between the very first dive and the following apneas... I also learned the importance of physical relaxation and mental "letting go" (which are useful not only in freediving, but also in everyday life).

From snorkeling to freediving

Well, I'm only a great beginner for the moment and I still have a good margin for improvement! Contrary to others, I'm not especially looking for depth or performance, but rather pleasure and ease...

The idea is to be able to get a closer look at fish and coral when I go snorkeling. And then, maybe, one day, to be able to approach (and photograph, and film) dolphins, sharks, manta rays and other friendly creatures, without scaring them with a plume of noisy bubbles!

In particular, I remember my snorkeling session with the dolphins of Sataya, Egypt, and the whale shark trip to Mexico : if I had taken a few freediving classes before, I would have been much more comfortable making my pictures...

During my trip to the Maldives in February 2014, I didn't know much about freediving yet either. But some of my diving buddies on the fabulous boat Ocean Divine were also excellent freedivers (I'm late in my publications, I haven't told this part of the trip yet).

During our snorkeling breaks, I was a little envious to see them immersing and descending below the surface, with no apparent effort...

Me, not very good at holding without breathing underwater, I was content to splash around on the surface with my camera. Admire the graceful position... (Thanks to Jeff for the pictures !)

The beauty of free diving

I am not a little proud of having obtained, after my initiation in Indonesia, my first star Aida (International Association for the Development of Diving).

What is fascinating about freediving is that it involves primitive physiological resources, which we all have within us, without really being aware of it. Our body is now adapted to terrestrial life, but it has kept buried, over the course of evolution, somewhere deep in its cells, the memory of its former aquatic life... The subject interests doctors and biologists. I refer you to this page of Rémy's Blue Addiction website, which explains it very well:

→ We can all do freediving

I will continue to scuba dive, of course. But I also want to progress in freediving... You are freed from the equipment, you listen more to your body. And above all, it's so much more beautiful!

It's also a lot of fun to meet scuba divers, underwater... They can't believe to see freedivers passing under their noses, with no other equipment than the fins-mask-tuba gear!

I have had the opportunity to try freediving again or to be with other freedivers on new trips:

Finally, to close this chapter on my discovery of freediving, I really like the inspiration that today's freedivers show to share their passion, thanks to videos posted on the internet. They are more and more numerous to put forward the aesthetic dimension of freediving, to offer another approach of the underwater world or of the sensations in diving, which is neither documentary nor reportage nor competition...

The best known is the freediver Guillaume Néry, world champion in 2011 and French record holder at -125 meters. He's the one we see in the movie Free Fall, directed by his partner Julie Gautier, who has been a hit on the internet since 2010.

In April 2014, when his book came out Depths, I had the pleasure of interviewing him for the digital evening edition ofOuest-France.

The article is available as a PDF capture on the the link below:

→ Guillaume Néry, a life in freediving

Guillaume Néry and Julie Gautier have directed a new short film (in which Rémy Dubern participated), which I invite you to discover below.

The theme of this film is the hallucinations caused by narcosis, that intoxication of the depths felt by divers capable of going very far underwater... The bias here is again very aesthetic, but in a more psychedelic and somewhat frightening vein...

Guillaume Néry also participated in a film in the mexican cenotes. I find there the atmosphere and the play of light that has so fascinated me for my own images.

Of course, snorkeling in this kind of place is reserved for pros... I'll give you an excerpt below. It's superb, but again, rather worrying.

For the fans of this kind of offbeat films about freediving, I put below the links to two other articles I recently published, with more playful little films: