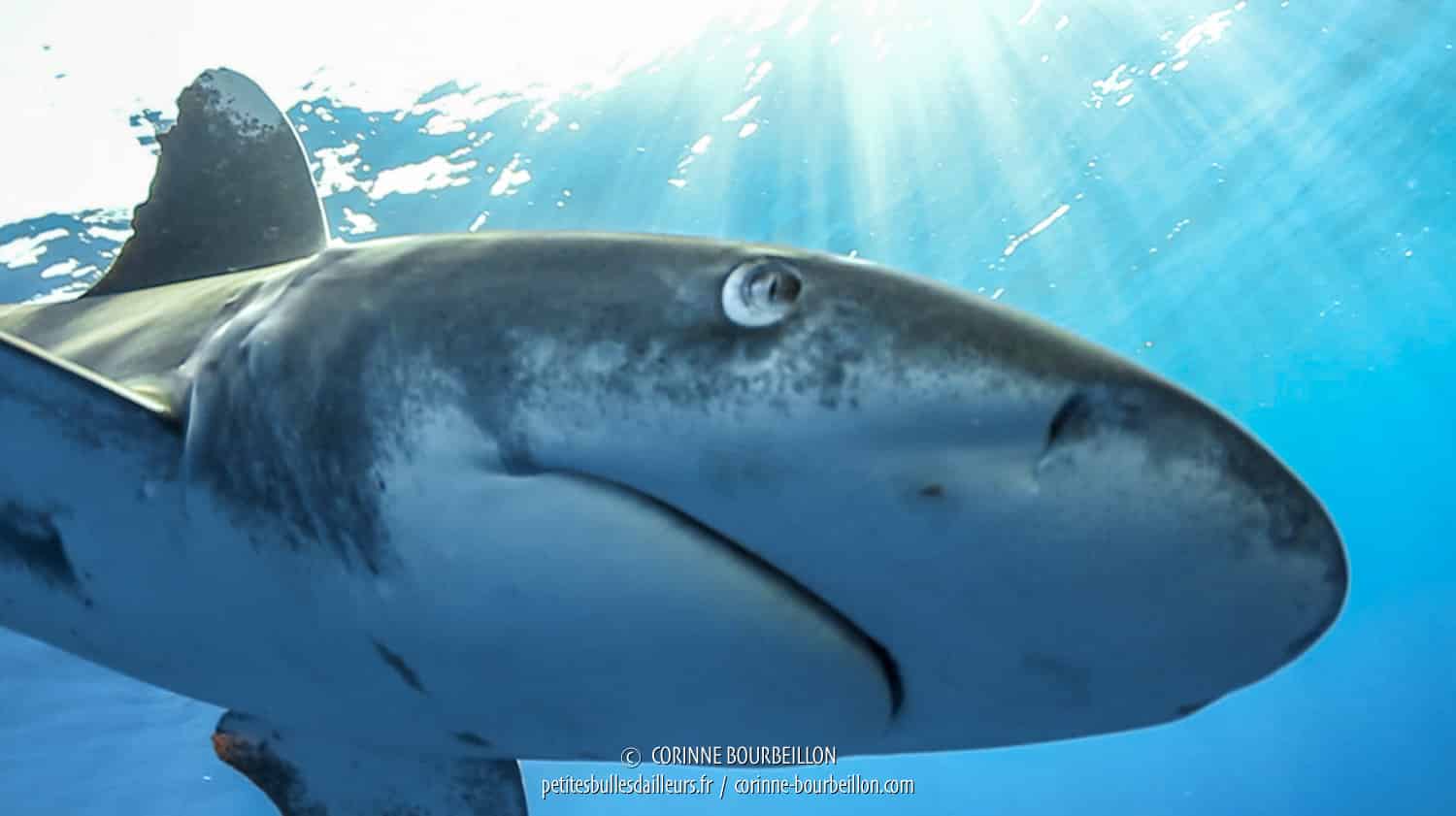 Those who follow me on Facebook have already seen the video in preview... 🦈 Having the opportunity to watch a shark (or several sharks) during a dive always makes your heart pound a little harder. But filming the depth of its eye, because it has decided to come and stick itself to the dome of your photo lens... well, how to say... It's an experience that I will never forget !!!

An encounter both intense and unexpected

I let you witness this totally unexpected, intense encounter, as I experienced it, with this longimanus shark (oceanic white tip shark)... It was November 13, 2017, at the very end of the dive, at the Habili Ali (Saint John's Reef) site in the southern Red Sea, Egypt.

At the end of an one-hour immersion with my day pairs Anu and Alain, I discover, at the safety stop, that an oceanic white tip shark is there, circling at the surface.

In this month of November 2017, I embarked, as in 2016 at the same time, for a scuba diving and snorkeling cruise, organized by my friends Phil Simha and Rémy Dubern, aboard theExocet. Thanks to them, in 2016, I had already been able to watch the behavior of longimanus sharks, at the Brothers Islands:

Read → Under the sea with the longimanus sharks

Having had this first experience, I am not particularly worried this time. On the contrary. I am delighted at our luck, because the site where we are, Habili Ali, one of the reefs of the marine sanctuary that are part of the famous St. John's Reefsis not known as a "longis corner".

But I still don't know, at the moment when all these thoughts cross my mind in front of this lonely shark, how right I am... 👌

Anyway. So I keep an eye on the shark and decide not to turn on my flashes, which I have just switched off during our ascent (the sharks are, it seems, very sensitive to the electrical impulses coming from this type of batteries which launch regular recharging cycles).

As for the longimanus shark, it continues to patrol quietly, until (finally!) it decides to come to meet me. This time, no doubt about it, it really comes closer, the lateral come-and-go of its caudal fin propels it straight to me...

I stay well in front of it, the dome of my camera stretched out at arm's length. I don't move, don't let too many bubbles blow so as not to frighten it. I don't take my eyes off it over the top of my camera housing and I wait for the moment when the shark will turn around and go back the other way (as I have seen its fellow sharks do in the past).

But it does not leave. Not immediately. 😱

For a few seconds (which seem very long to me), the longimanus shark remains the eye and the "nose" glued to my dome. Fascinated by its own reflection? Hypnotised by the mineral shine of the glass? Attracted by the electrical impulse of the camera in video mode?

It ends up coming straight into contact! This triggers the reflex movement of a special eyelid, which comes to protect its eye. Never before, other than in documentaries, have I ever observed this third eyelid or "nictitating" membrane in action. All right, well, that's done.

In any case, this brief contact with the dome of my housing was enough for it, it immediately faded from my company. After it left, I didn't insist and quickly got back on the inflatable boat. But I still can't get over the funny wink that the longimanus shark gave me!

More to read → All my dives with sharks