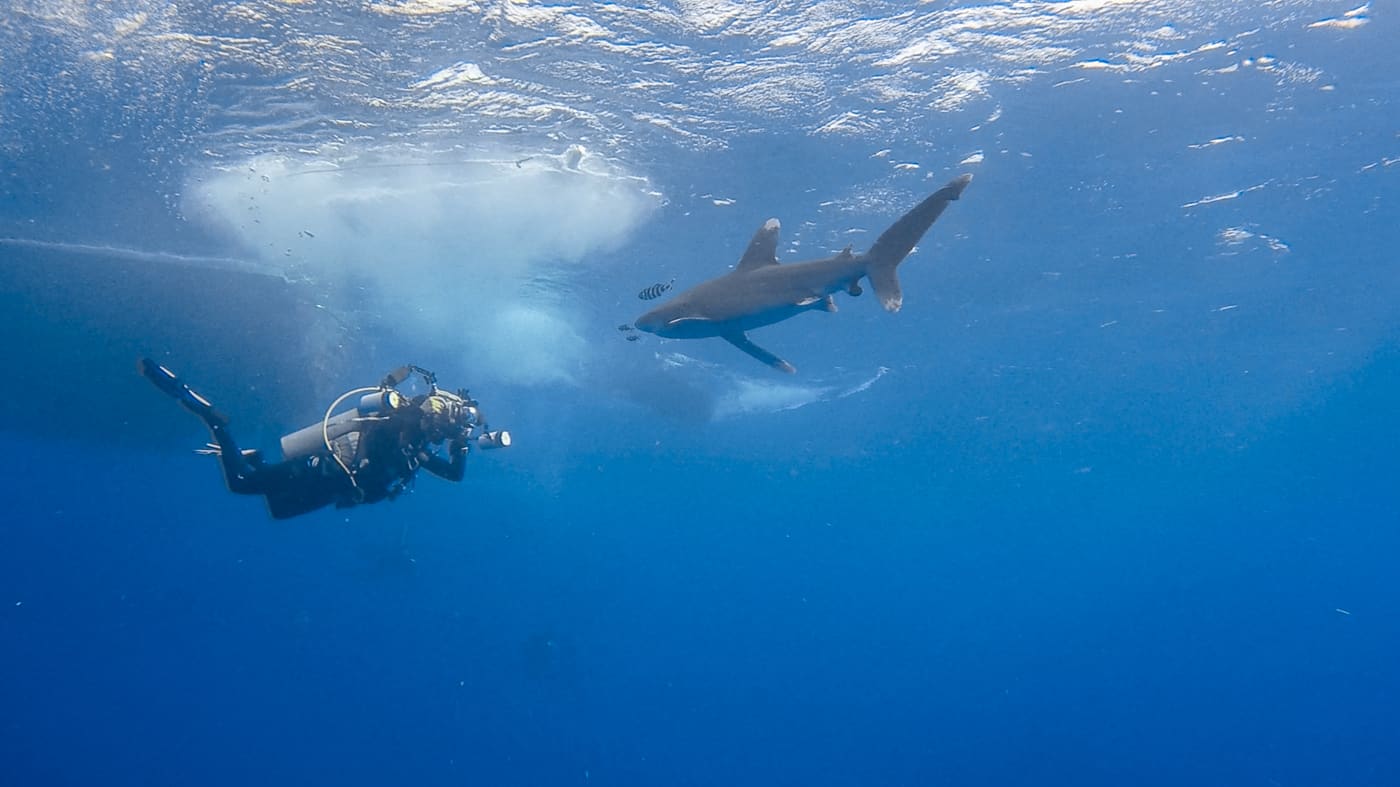 Underwater with oceanic whitetip sharks in the Red Sea

How beautiful are longfin mako sharks! I loved watching and photographing them in the Red Sea. But I must admit, they're also a bit scary...

➜ See here : all my posts with sharks in them !

But longan sharks, also known as oceanic sharks (Carcharhinus longimanus(their scientific name), that's a new one for me!

Below is a short 30-second video, made in the Red Sea in October 2016during a cruise aboard theExocetby one of my diving buddies, Doniphane Lachat. We can see a longiman coming to meet me, not really frightened by my little person...

The longiman can be 2 to 3 meters long. It's a magnificent shark! I find it very beautiful, very photogenic, almost elegant with its long fins (hence its name longimane shark or "long hand") with a rounded white tip and its faithful cohort of small pilot fish.

What a look! And watching him swim is absolutely fascinating.

Here is the series of three pictures I took during this little face-to-face that we see in the video:

I come out of the water with stars in my eyes, after my very first encounter with a longimane. And I'll see more on the next dives! It was at the Brothers, two arid and isolated islets in the Red Sea, in Egyptian waters.

Big Brother and Small Brother are renowned diving spots and the area is a protected marine park. When the swell is not too bad, you can also explore two wrecks.

The Brothers Islands are located very far offshore, their drop offs are exposed to currents and descend to several hundred meters in depth, so that one can encounter a so-called pelagic fauna (which lives in the open sea and does not normally approach the coast) in addition to the small fauna usual to the reefs.

In addition to the longimanes, I saw a huge tuna and barracudas. Several of my diving companions managed to observe a thresher shark and hammerhead sharks. As for the coral, it seemed less spectacular overall than in Indonesia, but some parts of the reef are splendid.

For a more detailed description of the Brothers and the diving conditions, I refer you to this page of the DAN website:

A "detail" that made me appreciate being on the huge and comfortable Exocet The crossing to the Brothers takes many hours and is not exactly a quiet sea ride, at least during my visit in October. The swell and waves can be rough. Several of us were sick and I, who didn't think I was prone to seasickness, must admit that I wasn't very strong on the way out...

On the way back, it was much better: I didn't play hard to get, I opted for the anti-seasickness pill. It worked!

Even among divers and ocean-lovers, the longnose dolphin has a reputation for being a shark to be wary of.

"This species has a bit of a dog's behavior, explains the underwater photographer Phil Simha, organizer of the cruise, the day before our immersions to the Brothers. The longiman is curious, opportunistic, it comes to prowl under the boats, and everything that moves on the surface attracts it. Underwater, it is not afraid to approach divers, to come into contact with them... "

In short, where most of the other sharks I have already met while diving prefer to keep their distance when they come across groups of sharks with plumes of bubbles, the longiman, on the contrary, will be intrigued, attracted, and will willingly come to see what is going on...

See also ➜ Wikipedia entry for the longiman
On the Sharkuterie blog ➜ Is the reputation of the longimanus justified? [post from 2006]

Update 2017. I crossed paths with the longfin sharks again, when I returned to dive in the Red Sea in November 2017, still aboard theExocetone year after the dive-cruise I'm talking about here. I invite you to watch below the video I made, where I was given a very close look at a very (too) curious longiman: 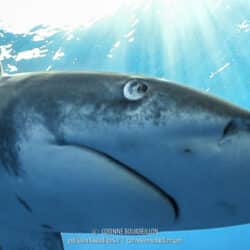 Although I find it beautiful, the sinister reputation of the Longimane is not really usurped. In recent years, in the Red Sea, there were deadly attacks (one in 2009, several in 2010 and one in 2015, in particular). Each time, bites inflicted from below or from the back, to persons swimming on the surface, bathers or palms-mask-snorkel. But never on submerged bottle divers, to my knowledge.

Updated 2018. There have unfortunately been two cases at the Brothers of bites on scuba divers in 2018, one on the thigh, the other on the calf. I take this opportunity to add below the educational sheet designed by Steven Surina of Shark Education...on the proper attitude to adopt when you're in the presence of a shark underwater:

On the boat, we are seriously briefed before our dives at the Brothers, territory of fascinating and worrying longimanes ...

It is forbidden for snorkelers to go in the water and for everyone to splash around in the sea. To observe the sharks, only bottle diving is allowed, with a few precautions: avoid hanging around on the surface during the immersion as well as during the ascent, stay together underwater, especially when you are under the boats where the sharks like to hang around, and, at the end of the dive, do not surface all together but one after the other

Of course, you are asked not to lose your buddy, to stay calm underwater and to keep an eye on the blue in different directions...

Drift in the blue

But during one of our dives in Small Brother, my partner Françoise has the misfortune to lose her camera, while launching from the stern of theExocet. There is quite a swell, I have just gone down a few meters to wait for him and, already a little displaced by the current, I attend the scene under the surface, powerless.

I'm a bit too far away to go for it and try to recover the device, which I can only watch sink... 😱 The longiman that roams near the boat and that I watch out of the corner of my eye is sharper than me. But it immediately loses interest in this inedible object, which continues its course towards the depths... There is a hundred metres of water where we are moored, alas, which makes any recovery project impossible.

Atrociously frustrated, terribly disappointed, Françoise still wants to go diving and joins me, with big sad eyes behind her mask. 😢 I sympathize wholeheartedly and check again that my own device is well secured, attached to my stabilizer vest .

We stay at shallow depth, between 10 and 5 meters, captivated by the spectacle of this longimane that circles around us. As a result, we drift, and when we start to swim again, it's already too late: we drift away from the reef of the island, towards which we were supposed to be heading. After a few minutes, we fall into the blue on a group of several other divers from theExocet. A little lost too, one would say. Like us, they were surprised by the surface current ...

But they are two longimanes who are circling us now! And they're passing by. How fortunate! I had been a little disappointed with the dives at Big Brother, where not a shark had deigned to cross my path. But Small Brother fills me up! The longhorn seals are here and here. And they're not shy models... 😮

We are several photographers in the group and everyone is quite happy, I think, to be able to take pictures... But well, we have been drifting for a while without really knowing where we are. It is better to report to the surface without further delay to the semi-rigid and to go back up. This dive lasted only 20-30 minutes instead of the usual 50-60... But what intense minutes!

One of us deploys his parachute (for non-divers: it's a sausage-shaped buoy that we fill with air underwater and let it fly to the surface, so that the boatman can spot us and know where to come and pick us up). The Zodiac appears immediately. Françoise is the first to go back up. One by one, we climb aboard the dinghy, without any trouble, while those waiting underwater watch the sharks passing by and passing by again.

Of course, we all have an emotional thought for the last of the group to go back up: alone under the parachute, he lived a little moment of solitude with the longimanes... Rich in emotions, this dive! I'm not about to forget it.

I've just come back from this cruise on the Red Sea in wonder, thanks to the longimanes. But like many other sharks, the species is a victim of overfishing: its huge fins are highly coveted for the Asian market, where they end up in soup in restaurants or as a supposedly medicinal or aphrodisiac remedy ...

As the longiman willingly follows boats, cetaceans and schools of pelagic fish for opportunism, it also often ends up in the so-called by-catch...

Spread throughout the world's tropical seas, it was once one of the most abundant sharks. Today, it is one of the most threatened. Will conservation measures and regulations succeed in reversing the trend? The longfin shark is on the IUCN global red list (International Union for Conservation of Nature) and in 2013 it was added to Appendix II of CITES (Convention on International Trade in Endangered Species of Wild Fauna and Flora).

I measure how lucky I am, as a simple diving tourist, to have been able to observe these magnificent sharks in their natural environment. In ten or twenty years, if the shark-finning (fin fishing) continues at the same pace as today, there will be nothing left to observe under the sea .