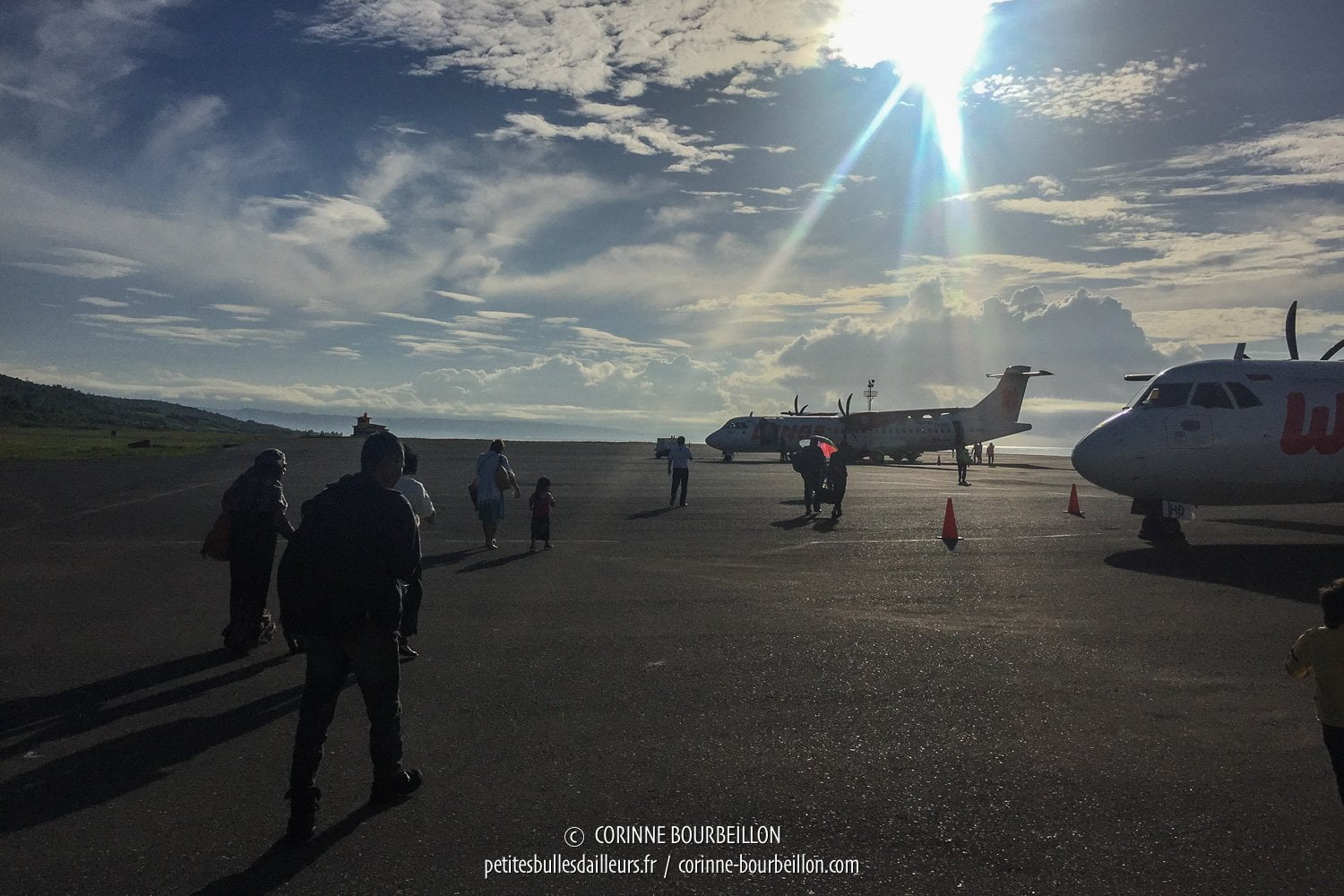 On the tarmac at Luwuk Airport. (Sulawesi, Indonesia, July 2017)

When You Travel in Indonesia

Ah, Indonesia!!! My favorite destination for scuba diving! But before being able to blow bubbles with the fish, you sometimes have to face the dreaded jam karet, the "elastic time"...

A long trip to Indonesia

That's right! In this month of July 2017, I flew (again) to Indonesia! 😎 Arriving in Jakarta, the capital, on the island of Java, is easy. It's after that it gets harder...

Nothing is ever certain when you travel in the huge Indonesian archipelago. A volcano can wake up (like the Sinabung, at the moment when I publish this post, at the beginning of August 2017). Or the weather to make his. In Indonesia, late planes are the norm, and on many roads in poor condition, the speed limit is never more than 50 km/hr. Over there, you never count in kilometers, but in hours. You're never sure what time you're leaving and what time you're arriving. When you travel in Indonesia, the only thing you're supposed to do is put yourself in "patience and zenitude" mode.. And to tame the jam karet, the "elastic time"...

Any journey, any transport is potentially synonymous with hazards, delays, unforeseen events, delays. We must make do. And tell you it does not matter. Because at the end of the end, you always end up reaching your destination. Wonderful Indonesia, as says the tourist office.

For the first leg of this new dive trip to Indonesia, I opted for a lost corner, not far from the usual tourist routes. I have already made more crooked way, so I'm reasonably optimistic.

I booked in a tiny dive structure (only three bungalows for now, soon five), the owl Tompotika Dive LodgeIt is located in Kampanar, a small Muslim fishing village on the eastern peninsula of Central Sulawesi. This is the place:

It is far from everything and very nice. With, as is often the case in small Indonesian villages, the typical sound environment that's going well ... ???? Strident cries of children playing, unintended choir of dogs barking, petarades of motorcycles and boat engines, competition of cocoricos ragged between cocks and Very early morning calls from mosques ...

I love to be in this kind of atmosphere and not much wakes me up at night. At the risk of sounding like a lecturer, I'll leave a little warning here for travelers who love "authentic": in Indonesia, the peaceful atmosphere of a village is not necessarily synonymous with silence and tranquility... 😉 I'm delighted with my stay in Kampanar. I will tell you about it in a future post.

So this is it. I arrived in Jakarta July 1st at 7am, after a fifteen-hour flight from France. I end up in the late morning with a domestic flight to the city of Luwuk, Sulawesi, with the Indonesian low-cost airline Lion Air and its subsidiary Wings Air.

I'm supposed to land in Luwuk at 4:50 pm I will then only have two to three hours to Kampanar. A driver sent by the Tompotika must pick me up at Luwuk airport in the late afternoon. (Yes, long journeys do not scare me, when it is to go diving ... ????)

But this flight Jakarta-Luwuk is not direct. There is a stopover and change of aircraft in Makassar, the big city of South Sulawesi. And that's where the jam karetthe famous "elastic time", takes back its rights...

At the Makassar airport, at the boarding counter for correspondence, the young woman in charge of picking up the passengers told me to sit down and wait. The flight will be delayed.

Good. Nothing more normal, in Indonesia. In fact, I was rather surprised at the punctuality of the first plane between Jakarta and Makassar ...

30 minutes, then an hour, then an hour and a half pass. I'm coming back at regular intervals if we always leave from the same door, the 5. (Because I've already been hit by the unexpected door change, at Makassar airport.) Yes, yes, reassure me -your. And I reconfirm the delay.

Late afternoon. Of course, because of the late arrivals, the flight ends up being cancelled!

"Bad weather in Luwuk", an airport employee explains to me. An Indonesian guy I'm chatting with tells me that he called a friend in Luwuk, and it's flooding over there! A huge storm, with waterspouts. 😱

The small crowd of passengers patiently waiting in front of the door then followed suit by an airport attendant in an orange vest, who led us down the halls to the entrance to the terminal, where we were all entered. the lobby of the Ibis Budget hotel. I remember that I already slept here, between two planes, during previous trips to Raja Ampat. You can hear the airport announcements in the rooms very well!

Everyone must have their ID and boarding pass at the front desk. We are staying there for the night. It's a bit of a bazaar, I almost ended up in the room of an Indian businessman (we were the only two passengers to present foreign passports, we thought we were traveling together ????).

But finally, everything is organized not so bad. You just have to wait. Time is still stretching, endlessly. Jam karet ...

Three guys from the airport come and go, taking care of picking up the checked baggage of those who ask for it. I am soon reassured to see that my bag followed me well to Makassar.

The flight is postponed to the next morning, at 6 am. You just have to show the same boarding pass and leave the tags on your luggage. I get the information repeated three times to be sure of the time. By the guy at the airport. By the Lion Air office employee. By an Indonesian passenger speaking good English.

I did well to buy a local SIM card at an airport shop when I arrived in Jakarta. I was able to keep up with my contact for the Tompotika as and when.

In the evening, two Lion Air employees knock on my door. They confirm me again the flight of 6am and ceremoniously give me 300,000 Rupees (about 20 €, it's huge for there, I ate for 30,000 Rp) compensation in cuts of 50,000, against the signing of a received and photocopy of my passport and boarding pass. I am pleasantly surprised, finally the company manages rather well the situation, I think.

At dawn, I find in the lobby of the Ibis Budget the guy speaking good English with whom I chatted the day before. I'm a bit indecisive: should we wait here for the airport employees? He tells me we can go straight there. Other passengers whose faces I recognize are there. A woman with her daughter, and another guy. We all decide to go together.

We are now patient in front of the famous door 5. There is no sign, no screen, no announcement about our flight. We have to wait, that's all. Yeah, it smells jam karet, that ... My Indonesian companions do not look more worried than that. The young woman has bought brioches, she offers us one to each. We chat, we joke. But I am much less relaxed than them.

Finally, shortly before 6am, we are signalled to board! Phew, no jam karet this time ... About an hour later, here I am on the shining tarmac of Luwuk airport.

A young man wearing the Tompotika T-shirt is here to welcome me. He is in charge of picking up my bag and carrying it to the car where the driver is waiting for us. And here we are, the three of us, off to Kampanar!

Flooding on the road

Very happy to finally be in Sulawesi, I am in a good mood despite the rotten road (jalan rusak) and gray weather. I jibe everything I know about Bahasa IndonesiaI'm doing selfies with both guys, who are thrilled. It's still raining a little at times.

And then after an hour and a half of driving, after a fork in the road, we have to turn back. I'm learning a new word: Banjir. Flood.

We can not go through there, the road is impassable. We will try another route. Jam karet ...

But via the bis route, it's the same. We are soon immobilized behind a long line of vehicles. The river of the corner and the rice fields overflowed on the roadway. So we wait. The driver and the guy from Tompotika go on the news. No problem, I have water, biscuits. The time is getting longer. Jam karet ...

It will take a car, stuck in front, decided to try the crossing and succeed, so that other drivers, including mine, embolden and imitate.

I let you appreciate the atmosphere, with the little video shot with the iPhone below... 😉

Finally, we will take more than five hours, instead of the estimated three hours, to reach Kampanar. Coolness and Zenitude, I am. Wonderful Indonesia. Jam karet ... 😂