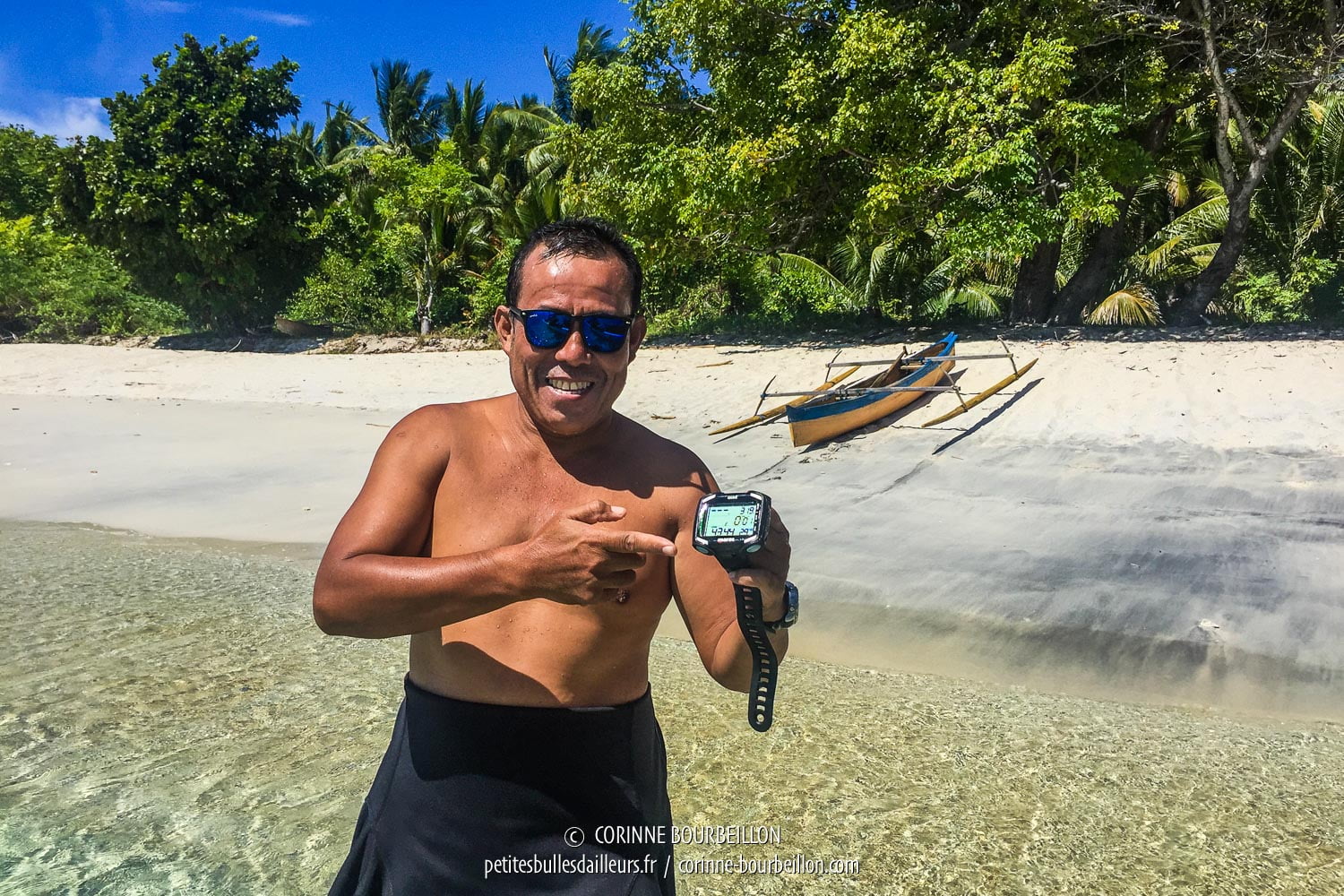 Opo the hero poses with the survivor rescued from the waters ... (Ondoliang Beach, Center-Sulawesi, Indonesia, July 2017)

My Underwater Guide Opo, A Hero

He's such a great guy. Opo, my dive guide in the waters of Central Sulawesi, became my hero. Because I can be a real burden sometimes...

July 3, 2017. I go back to the surface quietly, after three minutes of the safety landing at 5 meters. I mechanically control my climbing speed on thedive computer on my left wrist, then I meet the eye of my guide Opo behind his mask, which goes back to the same pace, facing me.

He greeted me the day before at the nice little diving resort Tompotika, after my eventful journey to reach the village of Kampanar, on the eastern peninsula of Central Sulawesi.

At 49, he is an experienced Indonesian dive guide. Originally from Manado, he knows very well the most famous spots of Sulawesi. He has accompanied scientific expeditions, particularly to the Banggai Islands, and has worked for a long time at the Murex Bangkawhere I've been before. During our discussions, during my stay in Kampanar, we discover common knowledge... The diving world is very small!

That day, Opo makes me discover the beautiful site of Batu Tekek, off Kampanar. A reef full of life, where colorful soft corals and gorgonians abound. He is a patient, attentive, caring guide. He takes the time to tell me which areas of the reef are most conducive to the mood shots.

The visibility is not extraordinary (I was warned, in this season, in this region of Central Sulawesi, water is very high in particles and plankton). But I still manage to make some cool pictures under the water.

Once on the surface, we remove our equipment, move it to boatman and go back on the Tompotika boat. And it's there, when I want to check my diving parameters, that I discover that my computer is no longer on my wrist ... ????

The boat is not very big and we are not many, there is just another couple of divers, Nadia and Akim, another guide and the boatman. Everyone helps me to look, in the middle of the fins and stabs (stabilizing vests) warehoused. We quickly realized that what isn't on board must be at the bottom of the water...

Opo is sincerely sorry for me. "We'll come back and dive here, we'll try to find him. " he promises me. Yeah, as much searching for a needle in a haystack ... I look good in front of the others, but I pester internally against my negligence. It's inevitably when I came back to the surface that I lost it, I remember very well having consulted it during the ascent and the safety stop.

As I always make the same gestures, mechanically, when I remove my equipment in the water once on the surface, I did not see that he had slipped my wrist at that time. I lacked vigilance. We must be wary of the strength of the habit, the overflow of self-confidence ... In short, I can only blame myself.

Well, it's not a tragedy either, it's just a material loss. It is replacing. But it's not exactly given, that kind of material. It makes you moan.

Opo kindly offers me to try our luck on the second dive of the day. But this time, the conditions are against us: reduced light with a sky that has turned grey, poor visibility underwater and a current that pushes us against the reef, making it impossible to explore the area where the computer must have fallen... Too bad.

"We'll come back at a better time." promises me again Opo. He is really nice. I do not ask so much and I do not want to be a ball.

At the end of the day, I resigned myself to this loss and do not see the point of spoiling the mood because of it. Opo lends me a computer from the center for the following days.

The hero of the day

July 6, 2017. Three days later, I'm the only diving customer at the Tompotika. The others have left and the new ones haven't arrived yet. The weather is great, it's today or never: we go back diving at Batu Tekek!

The other guide and Opo's son accompany us underwater. The plan: submerge where we surfaced the other day, go down, scan the bottom with our four pairs of eyes. "If we don't find anything, I'll look a little further on my own, Opo tells me. You will only have to stay together while continuing the dive along the reef. »

The dive is even more beautiful than the other day! At first, I start by inspecting the bottom at about thirty meters, methodically, making U's, but without much conviction. After a while, I see Opo waving at us: he goes to explore the bottom a little further and tells us to stay together, following the reef.

A few minutes later, we went back up to 20 meters, near the drop-off, when it reappeared. He pretends nothing, his arms folded against his chest, his hands hidden, but his eyes shine behind his mask. And he doesn't resist for long the pleasure of showing me his find!

I scream in my regulator (for non-divers: it's the mouthpiece you have in your mouth to breathe). Unbelievable! He found my computer! It was lying there, the screen against the sand, the bracelet intact and closed, for three days, at a depth of 31.9 meters.

Opo is the hero of the day. During our surface interval, on the beautiful white sand beach of Ondoliang, I make him tell about his exploit in front of the iPhone :

I'm a little ashamed, he was not obliged to give himself this pain, but he did it anyway. I am sincerely grateful to him. And that day, I find that the name given to foreigners in Indonesia (bule(to pronounce... ball and chain) sounds really good to refer to my little person ! 😂

I thank Opo endlessly and we follow the memory photos, before attacking coconut and grilled fish with local fishermen. For them, the bule Boulet is a nice distraction and an exotic tourist subject to photograph on the phone. I take the pose with the group, then each one of them ...

Even without the pretext of the engulfed computer, it was worth pushing here to enjoy this beautiful beach.

You have to learn from your mistakes. In my case, it will still take two lessons ... ???? Yes, I admit, the same incident had happened to me, in similar circumstances, a year ago, in Egypt. My old dive computer had also ended up sunk in the bottom of the Red Sea. There we could not go get it. It had been a good excuse to offer me a brand new ...

Lesson learned this time: I'll never take off my stab like a backpack again!

In fact, twice the same causes produced the same effects: a wrist that was too thin and a bracelet that was too big and not tight enough on the neoprene suit. As a result, when I pass the straps of the stab, the bracelet can get caught and slip off my wrist without me noticing.

My first computer was secured with a wrist strap. It wasn't enough. It must have come loose, too. I'm going to install a Velcro system on the inside of the second one to keep it from slipping off. Ironically, there's a Universal Computer Holder on my suit at the wrist - but I've lost the part that's supposed to be attached to the computer's wrist strap, which is supposed to grip the piece of fluffy fabric underneath, so I'll have to tinker with it myself...

Finally, on the advice of Opo, I changed my habits to decaprate on the surface. I now slowly open the clip of the left shoulder strap with the right hand, to completely release my left shoulder and remove my vest without contortion, which avoids any unfortunate collision with the bracelet of the computer ...