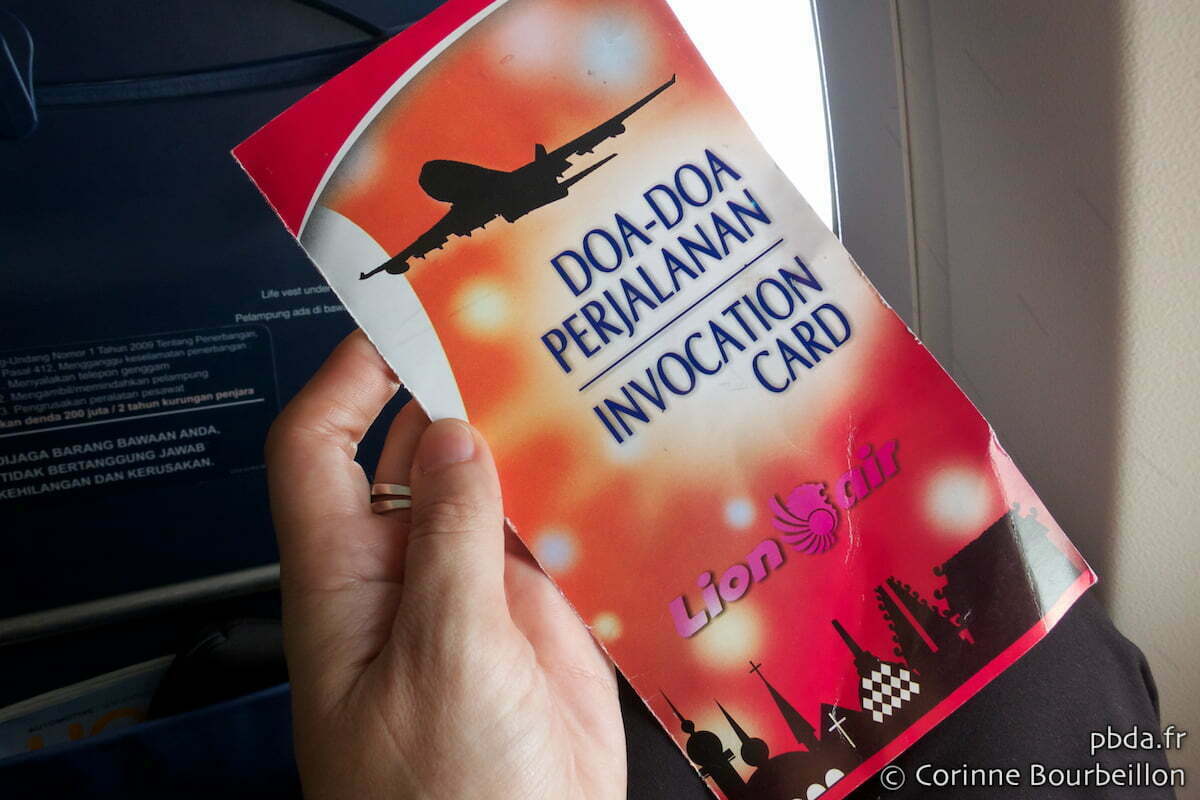 The Indonesian airline Lion Air has something unique. In the seat pocket, with the safety instructions, there is a booklet of special prayers for the flight.

It can be surprising. The Indonesian low-cost company Lion Air may be modernizing and upgrading its fleets with brand new aircrafts, but it continues to provide its passengers with a booklet in the seat pocket that seems to me to come from another age. Entitled Doa-Doa Perjalanan / Invocation Card, it contains prayers, for all religions.

Comforting for some, surely... But praying for a favorable sky, for the aircraft to fly well and for the crew to get safely the plane and all its passengers to their destination, I doubt that all this will have any impact on the flight. Anyway, it can't hurt...

I had already talked about it on this blog, during my very first trip to Sulawesi in 2007:

Each time, I am amused to discover this prayer booklet. It doesn't prevent me from respecting the beliefs of others, whatever they may be, as long as no one imposes any of them on me.

With Air Asia, Lion Air is the airline that I have taken most often, for my travels in the huge Indonesian archipelago.

Lion Air is beginning to seriously compete with Air Asia in Indonesia, both in terms of prices and routes (as of June 2013, they had 36 destinations and 226 daily flights on their website).

The airline has grown significantly in recent years and continues to expand and renew its fleet (notably by purchasing Airbus aircrafts to France).

During my March 2013 trip to Indonesiaso I flew on Lion Air again, like almost every time I've been there! On the way there, to join Halmahera (Jakarta-Ternate flight), then to join Sulawesi (Ternate-Manado flight), where my final destination was the island of Bangka.

I have often been asked... At the time I published this article (2013), all Indonesian airlines were blacklisted, except Garuda (the national airline) and Air Asia Indonesia (the Malaysian lowcost airline that stretches across Asia). But in a few years, fortunately, things have changed for the better. I've made two updates recently:

UPDATE 2018 : On June 14, 2018, ALL Indonesian companies were removed from the EU blacklist. You can consult the list directly on the website of the French government here → June 2018: the black list of airlines banned in the EU, as well as on the website of the European Commission → Air safety: press release.

UPDATE 2017 : Lion Air is no longer blacklisted by companies banned by the European Union (the complete list is available in PDF to download on the website of the European Commission). This post was first published in 2013 and since then, safety has improved, in the Indonesian skies! Commercial passenger airlines that comply with EU safety standards now include :
→ Garuda Indonesia and its low-cost subsidiary Citilink
→ Air Asia Indonesia
→ Lion Air and its subsidiary Batik Air

When I travel in Indonesia, I try as much as possible to fly on the most reputable airlines. But to get to some parts of the archipelago, you don't always have the choice, Garuda doesn't fly everywhere. So yes, I have flown in the past with companies that were blacklisted.

I add to the passage this link from Slatevery interesting, signed in 2013 by the "Breton-Indonesian" journalist Gurvan KristanadjajaThis report provides a good summary of Lion Air's development and the aviation market in Indonesia:
→ Indonesia, The Country of Low-Cost Airlines

Batavia, which was one of the few not to be blacklisted, went bankrupt early 2013 I had to take one of their flights, precisely, for this March 2013 trip... Too bad for me, I had already bought my ticket. With the "bangkrut" , all I could do was to forget it and purchase another air ticket. Only Lion Air operated the connection at the day and time that suited me, so I had to choose, once again, a flight with a prayer booklet included.

Too bad for Lion Air that there was this failed landing in Bali, in April 2013. I confess, I shuddered in retrospect, on my flight back from Indonesia... But according to the testimony of a French passenger, row 26 brings good luck…

UPDATED OCTOBER 2018 : a Lion Air aircraft crashed at sea shortly after taking off from Jakarta on October 29, 2018. It's creepy... He had 189 people on board. Lion Air had previously experienced only one fatal accident in 2004, when an MD-82 crashed on landing in Solo City, Java, killing 25 of the 163 people on board, according to the airline safety network. of the Flight Safety Foundation.

In any case, my Ternate-Manado flight went perfectly well. I was a bit sad to leave Weda, but Bangka didn't disappoint me... More in the next post!