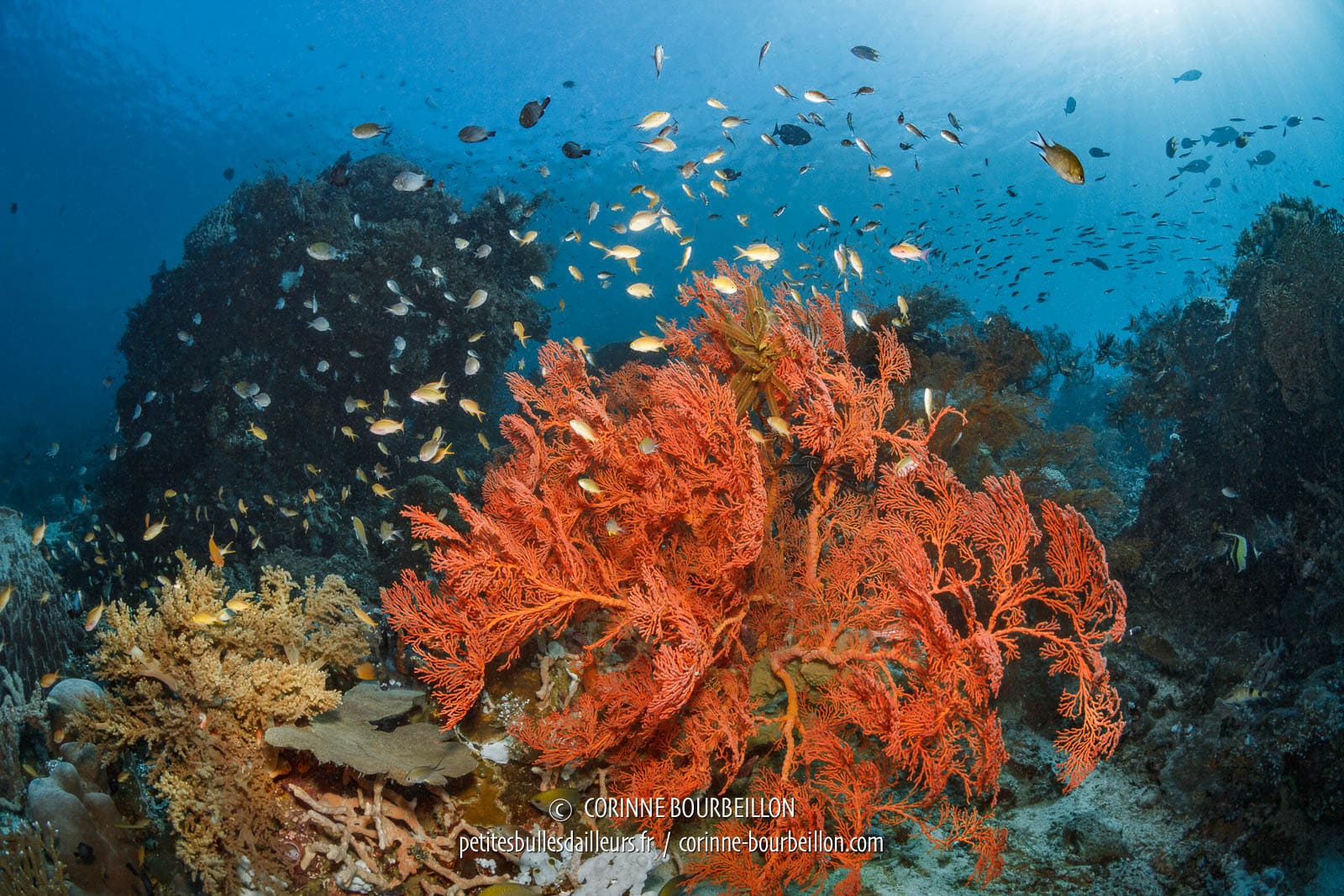 Fancy Indonesia? I take you diving in the waters of Sali Kecil, a small island far from everything located on the west coast of Halmahera. Awesome!

COVID-19. When will we be able to travel to Indonesia from France? As of the date I edit these lines, foreign tourists are not allowed to enter Indonesia. At the beginning of 2021, Indonesia's borders remain closed to visitors (except for holders of diplomatic or service visas and residents with Kitas / Kitap permits, subject to health checks). Only domestic tourism (also with health checks) is allowed: Bali reopened on 31 July 2020 to visitors from other provinces (or to foreigners already in the territory), Raja Ampat on August 22.

July 2018, Indonesia. I know, I'm very late in my stories ... ???? That summer, after the archipelago of Alor (see previous articles: All in the water in Alor! and A Strange Mermaid Called Dugong), I headed for Halmahera, located in North Maluku Islands (Maluku Utara, in Indonesian).

Halmaherait is the big quirky island that lies between the huge Sulawesi also called Celebes Island (in the west) and the huge Papua (in the east). We usually arrive via Ternate, an island-volcano cinema, flanked by an airport at the water's edge.

I do not have much to tell about Ternate, because I'm just passing through (with a short round trip taxi between two planes, from the airport to the big central pharmacy, to buy antibiotics to to cure an ugly infected palm bulb ... ???? #nocomment). To know more about Ternate and its region, I refer you on the excellent blog One Chai.

Me, for this new Indonesian trip dedicated to diving, I chose to ask myself for a week a little further south, to Sali Kecil, a tiny island located in the Strait of Bacan.

I did not come here by chance. A hotel with divers, the Sali Bay Resort, has recently opened on this island far from everything. It's here :

I make the crossing between the island of Bacan and Sali Kecil at dusk. I arrive on the island at night and discover my new environment that the next day: a dozen huge bungalows facing the sea in a beautiful shady coconut trees garden, all in length, at the foot of a hill covered with jungle. ????

The manager of Sali Bay Resort, a very nice Swiss Swiss polyglot, welcomes me in French. He tells me that the work is not finished in the resort building at the end of the beach called Divers Lodge, where I booked a room (smaller and cheaper than a bungalow Beach Front Villa).

Result: here I am graciously "upgraded" for the duration of the stay in one of these huge bungalows! ! !

The big class ... I'm really lucky. But this is not the first time that it happens to me, thus to benefit from a room of higher category, without having asked anything. Princess one day, princess always? ???? (Some examples: My princess boat in Komodo and Live my life as a princess in Raja Ampat.)

This time, I'm not the only one privileged. An Italian, who solo trip Like me and who will be my dive buddy the time of stay has benefited from the same preferential treatment, for the same reason. In short, we can say that we fell right at the right time ... There is even wifi (intermittent) and a small pool. I admit: I enjoy this incredible luxury in such an isolated place.

The few tourists who have decided to make the long trip to Sali Kecil are mostly divers who already know Indonesia. Over the days, I'm friends with the other photographers sub in the Camera Room, installed in front of the pontoon that spans the coral.

But we are not very numerous in mid-July and almost all my little comrades of bubbles do not dive in the morning, so I often have the boat and my guide for me all alone in the afternoon ... A little luxury extra, very appreciable.

We are therefore in a small committee, which makes the atmosphere very nice, almost family. In the evening, we meet before dinner with a drink in the restaurant room open on the beach.

A little parenthesis football, before you talk about coral and fish ... the World Cup final falls on July 15th, at the end of my stay, the day before my departure from Sali Kecil.

I am the only French and my lack of passion for the ball makes everyone laugh. The Indonesians who, in past years, all spoke to me about Zidane as if he were my friend every time I declined my nationality, now love Mbappé!

But with the time difference, around 23:30, the match has not started yet. We go to bed and get up early, here. Only a few football buffs (Indonesian resort staff and a German diver) are waiting around the only TV near the staff quarters.

As I have to get up before dawn to catch my flight Labuha-Ternate, I just take the predictions of each other before going to join one last time my princess bed ...

I will still find some pictures at the Indonesian JT during my stopover at Ternate airport, where I have several hours of waiting before the next flight. There is something to comfortably enjoy, in a great little restaurant-jewelry store-souvenir, with TV, wifi, large sofas where to wallow and (very) spicy food served by a lovely staff.

Let's go back to Sali Kecil ... Underwater, it's sumptuous. But on some sites, the current is not a joke and diving can become damn drifting ...

The islands of Sali Kecil (the little one) and Sali Besar (the big one) are indeed in the middle of the strait between Bacan and Halmahera (see Google Maps above). Depending on the tides and sites, the "juice" propels our palanquée a "corner" from the reef to the other, like pinball balls ... Sometimes, it becomes mission impossible to stop for photos!

Simply put, the ITF is a mega-current generated by the huge bodies of water in the Pacific Ocean that flow into the Indian Ocean, through the straits between the islands of the Indonesian archipelago ...

Here, in this strait on the southwest coast of Halmahera, the currents that can be observed from the surface at the mercy of the tides are indeed very impressive: it looks like a torrent in flood, but in the middle of the sea ... ???? The boat that transports me with the other divers between Sali Kecil and the surrounding sites (a big fishing boat fitted out for the diving and provided with powerful engines) is sometimes difficult to cross these impetuous waves!

Thanks to the Indonesian Throughflow brewing, Indonesia (with the Philippines and Papua New Guinea) is the region of the planet richest in marine biodiversity. The area holds in particular the record of species of corals, which is worth to him the name of Coral Triangle.

But these powerful nourishing currents also have a setback: they carry countless plastic waste, which come back to ruin at each tide, a sight that has unfortunately become "banal" all over Indonesia.

The solution to this problem? In Asia, as elsewhere in the world, it is mostly on land: it is the flow of our waste that must be dried up (avoid, reduce, recycle) to reduce the volume that ends up in the ocean. Once at sea, plastics break down into tiny particles that can not be "cleaned up" and end up in the food chain ... The Tara Ocean Foundationwho welcomed me in early 2018 aboard his schooner scientist for a report in the Philippines, launched in 2019 a new mission on this theme. To find out more, here is → At the origins of plastic pollution.

Explosion of life under the surface

But the underwater sites around Sali Kecil are splendid. Everywhere, there are armored reefs of coral and fish. The corner seems to have escaped the dynamite fishing that has destroyed so many other coasts in Indonesia.

What life! How beautiful ! ???? As soon as we go back under the surface, I marvel.

Overall, in this season, we had pretty good visibility. At almost every dive, we encounter harmless coral sharks with white tips (Triaenodon obesus), who sleep on the bottom or walk around in the crowd, indifferent to our regulators who vibrate and our bubbles that fuse. Impressive giant gorgonians, bright orange or fuchsia pink, curl up against the current. Clouds of anthias and wriggling fish-fish benches are made and unmade, tirelessly ...

There are also small sheltered bays, slopes and drop offs protected from the current, for quieter dives, as well as sites to muck-dive (diving at the bottom of the substrate, to observe the small fauna that is hidden there).

The inhabitants of the region do not see passing masses of tourists. So inevitably, when at the foot of the pontoon of a neighboring village, I put myself in the water for a muck-dive with my guide "eye of lynx" Jemmy, they observe me with curiosity.

Indonesian native of Manado (Sulawesi), Jemmy is a very experienced dive guide, who knows the expectations of underwater photographers like me. And I am able to let me fascinate very long by a huge gorgon as a tiny nudibranch ... Patient, attentive, he spares no effort under water to help me succeed my images. He leads me to strategic places when I'm at a wide angle and finds me small curiosities that are worth seeing when I switched to the macro lens.

I owe him especially to have managed to photograph my first nudibranch "Shaun The Sheep", Shaun the sheep: this tiny sea slug (Costasiella kuroshimae of its scientific name) is so nicknamed because of its resemblance to the character of the cartoon ...

I leave you with some underwater images brought back from there, it was time for me to get out of my hard drive ... ???? ????