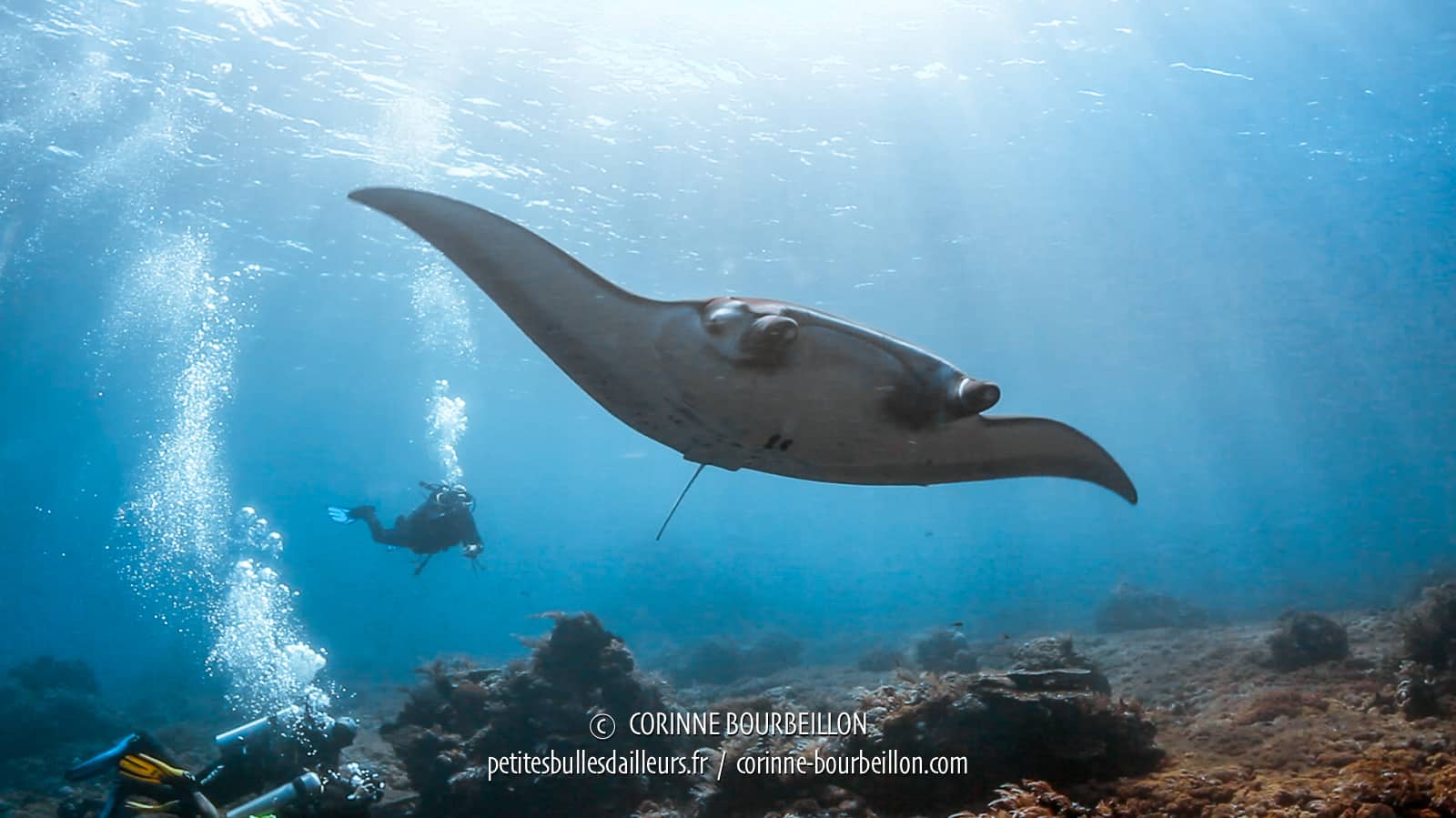 Near Bali, Indonesia, Sumbawa Island and its volcanoes offer a fantastic variety of dives. From manta rays to nudibranchs, the underwater world is full of wonders...

Where is that, Sumbawa?

Sumbawa is the last stop on my Indonesian journey of July 2018. Another island a little away from the traditional tourist routes for now. Located in the region known as the Lesser Sunda Islands (Nusa Tenggara), Sumbawa is very close to the well-known Bali and Lombok (in the West) and to the famous Komodo National Park (in the East).

Of course, it was the prospect of exploring the beautiful underwater world that attracted me there... 😉 And I wasn't disappointed.

I had spotted for a while the Kalimaya Dive Resort, a new diving resort opened in 2016 (and for now the only one in the area), which seemed to have everything to please me, according to the first reports found on the internet... I decided to go there and check it out myself!

From the airport located in Bima to the Kalimaya Resort, it takes about two hours by car. The resort is just next to a fishing village called Poja, north of the port of Sape, the "big" local town... It is right there:

A brief overview of Sumbawa

The few tourists who stay in Sumbawa are mainly surfers. They go to the west coast, in front of Lombok. To the northwest, some seaside tourism has also developed around the Moyo and Medang Islands Marine Reserve, in front of the Tambora volcano (the area has just been recognized "Biosphere Reserve" by Unesco).

I went the opposite way, to the east coast. And since I dived every day, I didn't really visit the island, which is very huge. I did manage to make a small land incursion on the Sape side, to buy some beautiful traditional fabrics, which allowed me to see several fishing villages and the surrounding countryside as I passed.

How to get to Sumbawa? Sumbawa is easy to reach by boat or by plane, there are flights from the airports of Bali, Lombok or Makassar. You then land at the airport of Bima. There are also crossings by ferry not too long from Lombok and Flores, as well as various "speed-boats" and cruises that stopover.

I also took advantage of the surface intervals, between two dives, to enjoy the coast. I have a dazzled memory of the magnificent Pink Beach, an immaculate, deserted, white-pink sand cove with intense turquoise blue waters...

Like its neighbor Lombok, the majority of Sumbawa's population is Muslim and most people still live in fairly traditional ways in small villages. The main resources of the island are agriculture and livestock, fishing, mining...

In this season, the relief has yellowish vegetation that contrasts with the soft green of the rice fields. As in Komodo and Alor, the climate here is much drier than in Bali.

To discover a little better Sumbawa, I imagine that a stay of two weeks to a month is a minimum. As far as I could tell, the roads are far from all in good condition and, apart from the surf spots on the west coast, there are not many hotel accommodations or tourist services. So you have to stay with the locals and manage to talk a little bit about Bahasa Indonesia…

If I believe the few stories and testimonies I have been able to find on the Internet, most of the rare travellers who take the time to explore the island are delighted with their stay, praising the hospitality and kindness of the people, the authenticity of the encounters and the magnificent landscapes, including the spectacular and formidable Tambora volcano.

Tambora, the volcano that disrupted the climate. Unknown to tourists, Sumbawa is nevertheless famous for its stratovolcano, the mount Tambora, which today stands at 2,850 meters. Its eruption of 1815 projected huge quantities of ash and sulfur particles into the stratosphere, which had catastrophic repercussions not only in Asia, but globally, causing global climatic cooling, which also in the year 1816 to be nicknamed "The year without summer". For three years, the harvests were everywhere disastrous, whether it was because of frost, drought or heavy rains, leading to famines and migrations in Europe and North America that marked the history of the nineteenth century…

Located on the famous Pacific Ring of FireThe Indonesian archipelago is actually a huge rosary of volcanoes! In this summer of 2018, it's the Mount Agung, the Bali volcano, which is under surveillance and preoccupying tourists because his recent eruptions have repeatedly disrupted air traffic and grounded aircraft ... Luckily, he stands still the day we take our flight to Bima.

I say "we" because that week I did not travel solo for once: my buddy during the Tubbataha liveaboard in the Philippines in May 2018 came to be with me. We decided to make again bubbles together in Indonesia! 👌

Diving at the foot of volcanoes

As Alor Divers and the Sali Bay Resort where I was just before, the Kalimaya Dive Resort is also in a rather isolated place, far from crowds... For divers, its location is particularly strategic.

The resort is indeed close to three very interesting areas, which are otherwise only accessible by diving cruise:

My buddy and I are settled like princesses in Kalimaya, in one of the rooms located in the long wooden buildings that are a continuation of the restaurant and the bungalows. Below, there are also comfortable gazebos, small beach huts above the sand, to rest or read sheltered from the wind and sun... Terrific. And then I discover with delight, in the building of the diving center, a gigantic Camera Room for my photographic clutter... 😍 👌

Everything is really well thought out and tastefully arranged in this resort. Meals are taken together around large tables which allows you to quickly become friends with other divers. We hasten to try out the lovely swimming pool, in front of the restaurant facing the sea. This will be our favorite spot for desalting after the dives. We get into the habit of watching from the corner of our eyes for the plumes of smoke that sometimes escape from the Sangeang, the top of which is clearly visible.

I made some inquiries afterwards about this volcano island. The last major eruption of the Sangeang was in 2014, according to Wikipedia, and it even disrupted air traffic in Australia! 🌋 😱

Our first dives are awesome. We go straight to Gili Banta, this island which is, in fact, an ancient volcano, a semi-sunken caldera, on the western edge of Komodo National Park.

We start with the Tanduk Rusa site, where we stay on a shallow underwater promontory, a dozen meters below the surface, protected from the furious currents around. This spot is a "cleaning station" where the beautiful and harmless manta rays come to hover over the coral potatoes, in order to get rid of their parasites and dead skin by small fish, the cleaner wrasses.

I'm thrilled for my friend: the graceful giants are coming soon, as promised (or almost) at the briefing!!! 😲 For her first dives in Indonesia, this sets the tone...

I let you discover this in the video:

As the days go by, we discover magnificent sites in the waters of Gili Banta and West Komodo. But often the day's schedule is adjusted along the way, depending on changing conditions and currents. Here too, the overpowered Indonesian Throughflow or ITF (this gigantic marine flow between the Pacific and the Indian Ocean that I was talking about in the previous post) makes the law.

When the site initially chosen is impassable, we then fall back on a neighboring spot that is more protected. Our guides are extremely careful to ensure our safety. We're here to have fun, not to be scared!

I have already done two dive cruises in Komodo (in 2016 and in 2011), I am excited to explore new sites, starting to dive from Sumbawa. This western zone of the maritime park does not always appear on the classic cruises routes, which, for the most part, crisscross the waters east side, between Komodo and Rinca, where are concentrated many famous spots.

Besides Gili Banta, where we saw the mantas, and which offers many other sites, one of those who impressed me the most is Buffalo Wall (Dinding Kerbau)at the foot of an isolated rocky island in the middle of the waves off Komodo, south of Gili Banta.

Underwater, magnificent walls covered with brightly colored corals, with a mixture of ascending and descending currents a little surprising. It is only once on the spot that one can evaluate if it is possible to dive there or not, even to postpone the immersion to later or another day, according to the conditions ...

Who says volcano, says black sand. Like a Bali or Lembeh, most sites around Sangeang are a paradise for underwater photographers "muck-dive" (observation dive of the small fauna, flush with the substrate) and "macro" subjects. This dark background offers a perfect jewel to live jewelry that are the nudibranchs (sea slugs) and other fascinating creatures, such as the marvelous little photogenic octopus.

You have to have the eye, to spot them. It is advisable to slow down and take your time, with the complicity of a guide accustomed to hunt down the small animals that populate these volcanic bottoms. Perfect buoyancy required, not to lift sand with a stroke of palm and ruin the scene ...

Like a Alor or Pulau Weh, we can also see in places strings of bubbles out of the sand. Underwater "fumaroles", gas emissions that remind us that we are diving at the foot of a volcano ... 😲

There are actually two volcanoes, two craters, in Sangeang. On the surface, during the boat trip between two sites, we even see a spit clearly smoke plumes regular. But we can not decide if the cloud that hangs on the other summit is just a cloud or if it also comes from the volcano ...

Along the east coast of Sumbawa, from north to south, there is plenty to do too, with many coves, beaches and islets, offering particularly rich dive sites, where you can find all the small usual fauna of the tropical waters of the Indo-Pacific.

Most of the time, I will be in macro mode, "safari" of nudibranchs ...

Finally, on the house-reef of Kalimaya, stretches an immense field of yellow elephant ears, these sponges similar to large fleshy leaves.

Big toad fish or frogs (antennal) of the same color have taken up residence there. An absolutely fascinating animal to watch. His fins are almost legs, he is able to open his huge mouth without warning to swallow a single shot, in a split second, a poor fish who saw nothing coming ...

Can not get enough of Indonesian waters, really. I left Sumbawa and its volcanoes with regret. But I intend to come back ... 😎