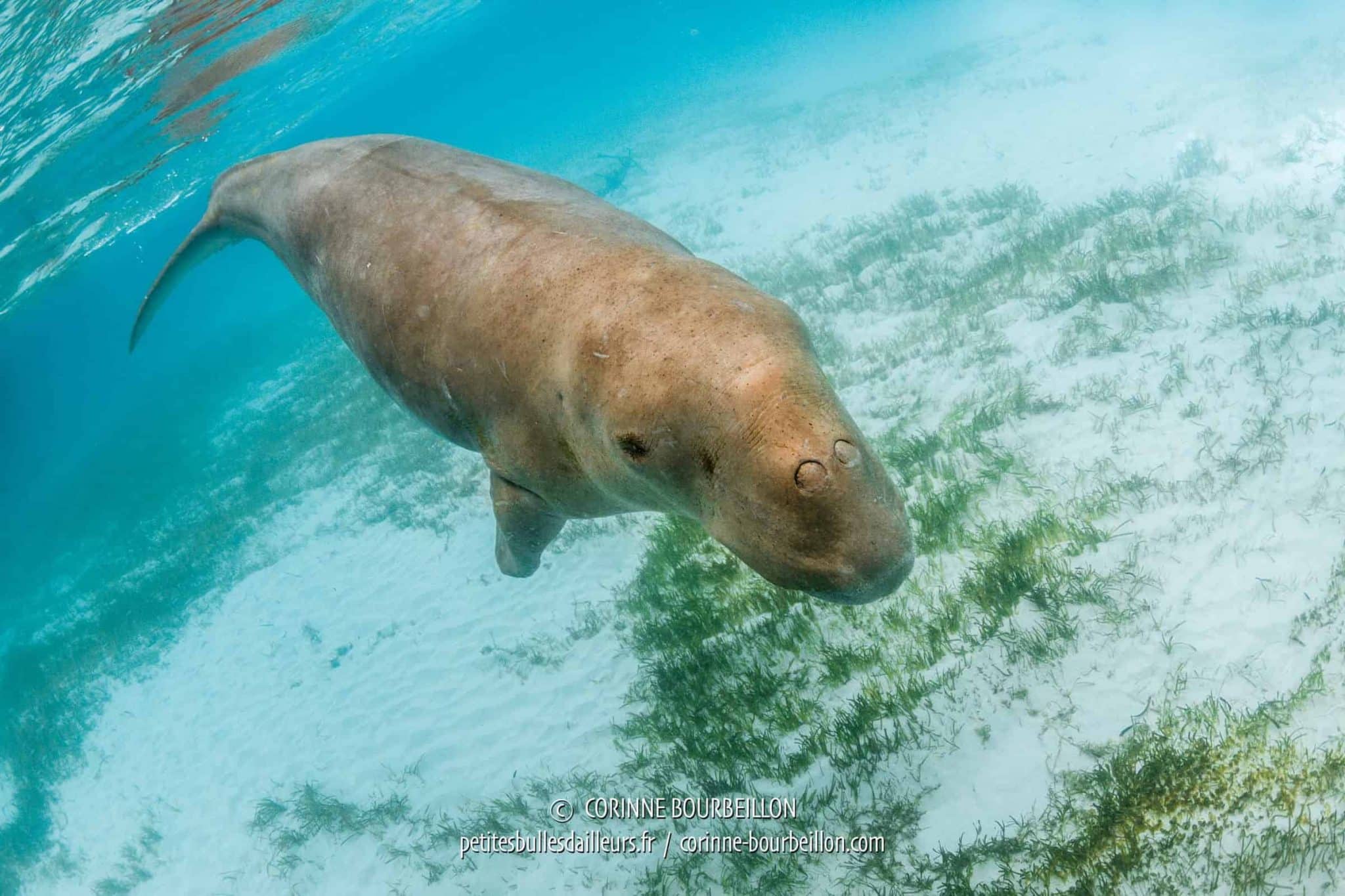 The dugong swims in shallow water, its main activity being to feed on the sea grass meadows in the bay. (Alor, Indonesia, July 2018)

It's called dugong or "sea cow." I was lucky enough to watch this fascinating animal in its natural environment in Indonesia.

COVID-19. Can we travel to Indonesia from France? As of this writing (June 7, 2022), foreign travelers are again allowed to enter Indonesia without quarantine. There is no need to present a PCR test upon arrival if one is vaccinated. The 30-day tourist Visa on Arrival (VoA) is reinstated at all airports (500,000 IDR, about 35 €, renewable once), the B211A-tourism visa is also valid again. The following are still required: a certificate of vaccination with two or three doses for at least 14 days (one dose for the Johnson & Johnson), an insurance covering Covid-19 (for an amount of at least 13 400 €), as well as the registration on the application PeduliLindungi for smartphone (iOS or Android). For regularly updated information on the health situation and tourism in Indonesia, I invite you to visit this page of BaliAutrement agency.

A marine biologist at Alor

In this month of July 2018, I land in the Alor archipelago, in the east of Indonesia, not far from Timor. I settle down for eight days on the island of Pantar at Alor Divers. A nice little diving resort created by a Franco-Slovenian couple, Gilles and Neya.

The accommodation is sea-facing, with simple but comfortable wooden cabins spread over a long deserted beach. I had previously stayed there in 2012, which allowed me to discover the magnificent coral reefs of the archipelago, swept by unpredictable currents.

On site, I have the great pleasure of meeting marine biologist Steven Weinberg, with whom I had filmed and photographed whale sharks two months earlier, in May 2018, in the Philippines, while ona diving cruise in Tubbataha, an exceptional marine park on the UNESCO World Heritage List.

This time, Steven is in Alor to accompany a small group of tourist divers, as part of a "bio" (biology) tour organized by the Safari Bali agency. 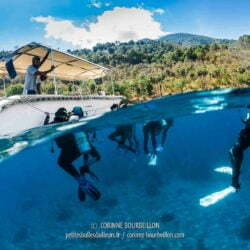 Everyone in the water at Alor!

When I arrive, he tells me with a smirk that he has a new adventure to offer me. A mini expedition to see a dugong!

He organized this before the arrival of the last divers who must join the group, it is not part of the official program. Steven has already seen the animal a few days earlier and he wants to go back there to take photos for his next book.

Of course, I can not resist such a tempting proposition. The only time I saw a dugong was by far, a stealthy shadow in the blue, in the waters of Bangka Island, in North Sulawesi.

The dugong is a sirenian

The dugong? It is a marine mammal that belongs to the order of "sirenians", says Wikipedia. I love it... The scientists in charge of classifying species are real poets.

Like his cousin the manatee, the dugong is said to be the origin of the myth of the mermaids. But in real life, the animal is more like a beast than a beauty... That said, from the surface, it is understandable that it can be an illusion.

Underwater, the dugong has a friendly face. But it is better not to trust it. A human splashing around in a snorkelling gear is no match for this powerful and massive animal, which is also very quick and fast when swimming.

The one I saw and photographed in Alor, a male who was not shy at all, was nearly 3 metres long and must have weighed 300 kg. In short, a not really sexy beast and impossible to confuse with a mermaid. Larger individuals may, it seems, reach 4 meters and 400 kg...

The main occupation of this apparently harmless vegetarian animal is to graze like a cow on the underwater sea grass meadows (up to 40 kg per day, Steven tells me), in shallow water, along the coast. And therefore close to humans, who have gradually depleted the dugong populations in the Indian and Pacific Oceans...

As a result, the species is now "vulnerable" and "threatened," according to theIUCN (International Union for the Conservation of Nature) and the CITES (Convention on International Trade in Endangered Species of Wild Fauna and Flora).

Some links to learn more:
On the WWF France website → Dugong, a siren in danger
The card on Doris website → The dugong
In English → Dugong and Seagrass Conservation Project

It is not clear how many dugongs there are in the world. I've found the map below, which gives a rough overview of their location:

It can be found in the Red Sea in Egypt. In the Indian Ocean in Mozambique, Madagascar, Sri Lanka. In the waters of the Philippines, Thailand, Malaysia, Indonesia, Australia, Papua New Guinea and Vanuatu ...

But the animal has become very rare. Meeting one is an event for divers who are fond of wildlife sightings.

Steven and I were met at a beach, where a narrow, multi-coloured traditional boat was waiting for us, its outriggers being PVC tubes painted with blue and white stripes. We quickly put on our wetsuits and leave the rest of our stuff in the car of the guy who gave us a lift.

On board, a rather intimidating guy, who we guess is the leader of this "dugong tour", gives curt orders. He really doesn't look friendly. Two crewmen show us our place at the stern of the boat and help us to stow our bulky waterproof photographic housings on the tiny platform ...

With us, there are three other tourists, Americans, sitting on the bow. The second hand engine that turns the propeller is backfiring loudly. Once out in the shallow bay, the gruff captain starts chanting out to sea. We can guess that he is calling the dugong, in his own way...

Once the engine is cut, we do not wait long. The crewmen have the eye. They immediately spot the dugong approaching, while we have not seen anything ... The animal comes and goes, turns around the hull, leaves. You have to be patient.

The dugong suddenly reappears near the boat. I can hear it exhale and inhale, I can see the flaps of its huge nostrils open and close, right in front of the outriggers. This almost human breath is disturbing, it reminds me my first whale in French Polynesia.

Our captain takes the time to study the dugong's behaviour, before allowing Steven and I to get into the water to take pictures below the surface. We wait for a while, watching the dugong's comings and goings.

Finally, we can take our masks and snorkels, our cameras and slide along the hull. But no swimming or wandering off! Despite the language barrier, the captain makes himself clearly understood by gestures and making big eyes. We are supposed to hang on to the boat with one hand.

It's a bit frustrating, but I understand these very strict instructions better when I see the dugong under the surface. It is both for our safety and to limit interactions with the animal, as it does not hesitate to come into contact. Passionate and totally fascinating but not very reassuring impulses...

Despite its massive body, the dugong is flexible and swift. It has a deceptively debonair head with small inquisitive eyes and a strange flattened muffle underneath, which allows it to "graze" on the underwater sea grass meadows.

I admit, I'm not very comfortable when I suddenly see it coming straight at me. 😱 Instinctively, I turn straight into a barnacle, in suction cup mode against the boat's hull...

Disappointed by my lack of reaction, the animal prefers to throw its devotion on Steven more boldly hanging on an outrigger a few meters from me. We then discover the passionate assaults a marine mammal is capable of towards a marine biologist... 😂 Not so easy to take photos of such an enterprising dugong.

Our gruff captain too seems happy. After taking us back safely, he even decides to smile and proudly poses with his local dugong conservation programme tee-shirt for the souvenir photo.

I will learn more about this particular character later, when I have a reliable internet connection, through several articles in Indonesian media and on the WWF website.

"Pak Oneh", full name Onesimus Laa, is the protector of the dugongs. In the short documentary below, the guardian angel of the sirenians presents himself as a repentant thug who has become a committed environmentalist, now acting for the good of his community and the environment.

This 12-minute film (with English subtitles), shot at the end of 2017 and posted on YouTube in June 2018, was made with Indonesian actor Arifin Putra to promote the local actions of the Dugong and Seagrass Conservation Project. Created in Abu Dhabi, this environmental programme, supported by the United Nations among others, aims to halt the loss of dugongs and their habitat around the world.

Among the various proposals: protecting dugongs instead of hunting them, taking care of coral and mangroves, continuing to fish in the traditional way, finding solutions for better waste management, giving priority to ecotourism over mass tourism, supporting scientific missions to study and census dugongs...

These are all good ideas, which involve the local population and which will eventually bear fruit, one can hope. But nothing is simple or easy in these Indonesian islands, where most people are very poor. Environmental action is not exactly the first thing on the minds of families in their daily lives.

I hesitated for a long time to publish this article, knowing that it is not necessarily a good thing to draw attention to the presence of one or more dugongs in the area, even if it is not really a secret anymore. A local travel agency even offers excursions like the one we did. But I also think that it is important to raise awareness among visitors, so that the observation is done in the most respectful conditions possible for the animal. Eco-tourism can surely contribute to save the dugongs.

"Our" dugong was clearly in rut when we saw it. Does it have a mate and offspring? I have not been able to find out. I hope that Pak Oneh and the other people involved in the local conservation programme will continue to look after him and that we will one day see it wandering around in Alor waters with its family...

Update, January 2022. I add below another video, more recent, shot by a couple of passionate divers, expatriates in Indonesia, the French Martiniquean Celine Monfort and the Dutchman Niels Prinssen (see their channel on YouTube and their website Travel2Sea), who had the same experience as Steven and me, when they were in Alor in October 2020. I notice that the dugong is similarly exhibitionist with them... 😂