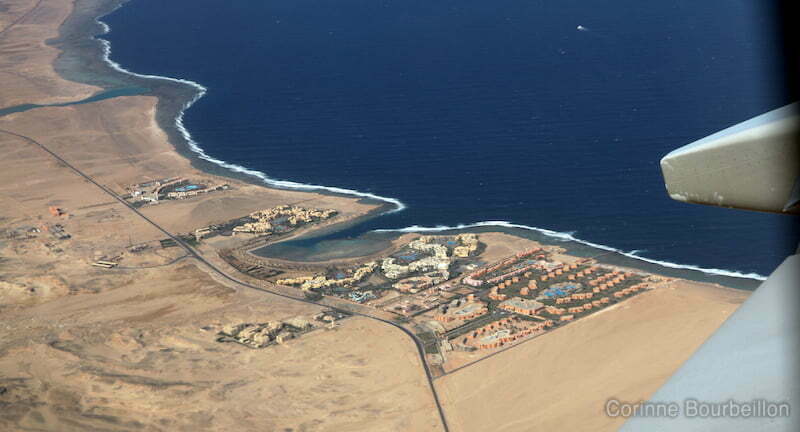 The Red Sea seen from above, in southern Egypt. November 2011.

In the middle of nowhere

I was in southern Egypt, in November 2011, for to dive in the Red Sea. Strange feeling of being in the middle of nowhere. No other landmark than a strip of asphalt between the sea and the desert.

Between sea and desert

To the left is the sea. To the right is the Egyptian desert. In our back, Marsa Alam. Right in front, Hamata. Our goal.

Hamata, where is the hotel that is to host our small group of diving divers. Where is moored the boat that will transport us from one coral reef to another.

I looked at a Google Map before coming. A little further, south of Hamata, there is a port that bears the beautiful name of Berenice. At the end of the road, even further, there is Sudan.

We landed at Marsa Alam. The minibus ride from the airport to our hotel lasts a good couple of hours.

From above, already, by the porthole of the plane, the sight seemed strange to me. No trees, no fields, no greenery. Just the azure sparkling water and the dry ocher of the earth. Here and there, resorts. Planted in the middle of nowhere.

Funny place, all the same, to come to spend holidays. Accustomed to the humid tropical Southeast Asia swept by the monsoons, where the exuberant vegetation easily turns to the jungle, where the agricultural areas are flooded for rice cultivation, I do not get used to this inhospitable pebble that s Stretches endlessly on my right.

People live here yet. Our minibus crosses some towns. A handful of houses, a mosque, a sign, an array of ragged palms along the road.

The most curious is the huge abandoned concrete buildings scattered at regular intervals along the coast. Huge unfinished hotel projects.

These remains of real estate are a little gloomy. Foolish, absurd.

Our minibus swallows the kilometers. In the distance, in the intense blue of the sky, a cluster of glittering kites suddenly catches the eye.

First of all, the show is incongruous, incomprehensible. In fact, they are kite-surfers. In addition to divers, another tourist tribe is also present in the area: the wind and gliding enthusiasts.

We will meet them at the hotel. Our two tribes have no hooked atoms and will not talk to each other. Like us, kite-surfers have been transported to the middle of nowhere to devote themselves exclusively to their passion. A parenthesis out of the world and out of time. With on the left the sea, on the right the desert.

A parenthesis out of the world and out of time

As a worthy representative of my tribe, I certainly loved this Egyptian trip devoted to underwater photography (read : Diving in the Red Sea, The color of the coral, Dance with dolphins). But from Egypt and the Southern Desert, from its inhabitants, I will not have seen anything.

I only had contact with the staff of the hotel or the dive boat. Only men. All adorable and caring. But it's weird not to meet any woman.

There were also a few kids watching every day our descent from the boat, trying to sell us trinkets.

Since I returned, I often think of these ghost hotels a little grim, abandoned, which will not land any tourist tribe. At this asphalt line that follows the outline of the Red Sea and leads to Sudan.

It was an unprecedented vacation destination for me. But I would only recommend it to divers and kite-surfers. We are really in the middle of nowhere, wedged between the Red Sea and the pebbles of the desert.

Many divers swear by Egypt for diving. It is true that the destination is less distant than my favorite seas in the Indo-Pacific zone. But for my part, I find this kind of desert atmosphere a little sad. I have trouble with the sand and the pebbles, no doubt, used to being in tropical greenery. But also with the lack of life around, the few possible exchanges with the population because of the isolation of hotels and then the fact of having to deal with an exclusively male staff ...

Short. I'm happy to have come, to have discovered the underwater world of the area, but I do not know if I'll be tempted again by a diving trip in the Red Sea.